Uvulopalatopharyngoplasty (UPPP) is a widely accepted surgical procedure for the treatment of obstructive sleep apnea/hypopnea syndrome (OSAHS)1 and the only one recommended by the American Sleep Disorders Association. Due to the inaccuracy of current diagnostic methods for preoperatively determining the level of upper airway obstruction in OSAHS patients, as well as the inherent technical limitations of UPPP in dealing the relevant anatomical factors, success rates in attainingobjective cure of about 40% after a long-term follow-up are far from desirable.2 Recent studies, however, have established a staging system that can result in success rates as high as 80% in select patients3 (see Chapter 16: Friedman Tongue Position and the Staging of Obstructive Sleep Apnea/Hypopnea Syndrome). In addition, UPPP is often part of a multilevel treatment strategy, which signifi-cantly improves success rates (see Chapter 17: Multilevel Surgery for Obstructive Sleep Apnea/Hypopnea). In addition to a considerable failure rate, complications of UPPP include nasopharyngeal stenosis, velopharyngeal insufficiency, pharyngeal dryness, hemorrhage, wound dehiscence, excessive palatal scarring, persistent dysphagia, and severe postoperative pain, not to mention rare but serious complications such as airway obstruction due to postoperative edema, leading to emergency reintubation or tracheotomy.4–7

Traditionally, UPPP is designed to eliminate palatal and pharyngeal redundancy by resection of excess loosepalatal and pharyngeal mucosal and submucosal tissue, in addition to tonsillectomy. The initial procedure, described by Fujita,8 as well as many other modifications, recommends excision of redundant mucosa, with a single-layer closure under tension. A widely accepted surgical principle is that epithelial surfaces should never be closed under tension. Repositioning of tissues should be accomplished at a muscular or subepithelial level, so that epithelium can be closed with minimal or no tension. The tense mucosal closure in traditional UPPP has resulted in two common sequelae.

1. Dehiscence of the suture line.
2. Severe postoperative pain, lasting as long as 2 weeks in some cases.

Likewise, epithelial tension may also be responsible for common complications that contribute to failure of the procedure and require surgical correction.9

Since its description by Fujita in 1981,8 many authors writing about UPPP have actually re-described the original procedure, with important technical modifications. Submucosal UPPP focuses on the importance of epithelial preservation, and tension-free closure of the epithelium; and on the preservation of the majority of the mucosa of the soft palate and the anterior and posterior pillars. Elimination of palatal and pharyngeal tissue redundancy (the palatoplasty and the pharyngoplasty components, respectively) is accomplished by subepithelial and muscular stretching and closure. Epithelial closure is accomplished without tension.

In this chapter, we describe the patient selection criteria, surgical technique, and postoperative complications for submucosal UPPP.

Candidates for surgical intervention must experience significant symptoms of snoring and/or daytime somnolence, documented failure of a continuous positive airway pressure (CPAP) trial, and documented failure of conservative measures such as dental appliances, changes in sleeping position, and sleep hygiene in general. Apparent obstruction at the level of the soft palate must be determined by fiberoptic nasopharyngolaryngoscopy and Mueller maneuver or sleep endoscopy. Adequate medical clearance and a thorough review of the procedure with the patient, as well as its implications, potential outcomes, and complications are essential components of the preoperative work-up.

Patient selection criteria for UPPP have been previously described by Friedman et al.3 (see Chapter 16: Friedman Tongue Position and the Staging of Obstructive Sleep Apnea/Hypopnea). Specific criteria for submucosal UPPP are the same as for classic UPPP, and include patients classified as Friedman Tongue Position (FTP) I or II with tonsil sizes 1–4. Patients with FTP III and IV are less than ideal candidates for UPPP, and should therefore undergo a combined procedure that addresses both the palate and the hypopharynx (e.g. radiofrequency base of the tongue reduction).10 An alternative technique, the Z-palatoplasty11 (see Chapter 33: Zetapalatopharyngoplasty), was developed as a more aggressive technique for patients with stage II and III disease. This includes all patients who have had previous tonsillectomy, as well as patients with small tonsils and those with unfavorable tongue positions.

Prior to the procedure, good communication with the anesthesiologist is of great importance, considering the distinct anatomic characteristics that cause OSAHS patients to have an increased risk for complications with general anesthesia. After oral intubation, the patient is placed in the head-extended position with the Crowe–Davis tonsillectomy mouth gag in place. Intravenous antibiotics and dexametasone are administered before incision. The surgeon should be comfortably positioned at the patient’s head, with headlight illumination.

The tonsils, if present, can be excised using any technique, but the authors prefer the cold steel technique to minimize trauma to the anterior and posterior pillars. The tonsil is grasped with curved Allis forceps and pushed laterally to help identify the capsule. This allows for assessment of the lateral extent of the tonsil, and exposes the proper plane of dissection (Fig. 32.1). An incision through the anterior pillar and the posterior pillar is made, preserving as much tissue as possible. If necessary, excess anterior pillar can be trimmed at closure. Posterior pillar resection results in posterior pull of the palate, which decreases the retropalatal space. The dissection is carried out using Metzenbaum scissors or a Herd dissector, dividing the tonsil capsule from the superior constrictor muscle. Constant traction of the tonsil is maintained, allowing the tissue to separate as it is dissected. The removal of the tonsil proceeds within its anatomic boundaries, and the musculature of the tonsil fossa is left intact. Dissection is carried out inferiorly, towards the base of the tongue, and a snare is applied to complete the dissection. If done carefully, at the end of tonsillectomy, the tonsillar fossa is dry and the muscle fibers are still covered by fascia. 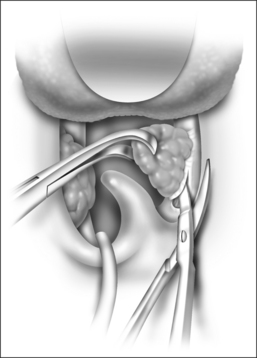 Fig. 32.1 The tonsil is grasped with curved Allis forceps and pushed laterally to help identify the capsule. The authors prefer the cold steel technique in order to minimize trauma to the anterior and posterior pillars.

After removal of both tonsils, the palate is addressed. The uvula is grasped with Allis forceps and retracted anteriorly for optimal approach to the posterior surface of the soft palate. A curvilinear horizontal incision is made on the mucosa at the base of the uvula posteriorly, preserving almost the entire posterior soft palate mucosa (Fig. 32.2). Using a cold knife, the mucosa is separated from the muscle, releasing the posterior soft palatal mucosa. A trapezoid incision is outlined at the anterior mucosa of the soft palate (Fig. 32.3). This level is identified preoperatively in the awake patient, just below the ‘dimpled’ area. The incision is carried bilaterally and horizontally across the soft palate, until the anterior pillar starts sloping downward (Fig. 32.4). The uvula and the submucosal tissue of the lower edge of the soft palate are excised (Fig. 32.5). Based on Fairbanks’ technique, an incision dividing the superior third fromthe inferior two-thirds of the posterior pillar is perfor-med. The posterior pillar is then advanced anterolaterally, towards the corner of the palatal-pharyngeal junction(Fig. 32.6), which ultimately gives a squared appearance to the resected palate (Fig. 32.7). By including contiguous muscle fibers in this advancement, a more lateralizing effect isachieved, which expands the airway in the anterior-posterior(because of the forward pull) and lateral dimensions. Elimination of pharyngeal redundant folds is achieved by approximation of the submucosa and muscular tissue of the tonsillar fossa and the soft palate, using interrupted 2-0 Vicryl™ (Ethicon, Inc., Sommerville, NJ) sutures through the exposed pharyngeal musculature (Fig. 32.8). These sutures also prevent the formation of a dead space, where a seroma or hematoma might develop. The mucosal flap edges are then loosely approximated, taking care not to undermine, using 3-0 chromic sutures (Fig. 32.9). 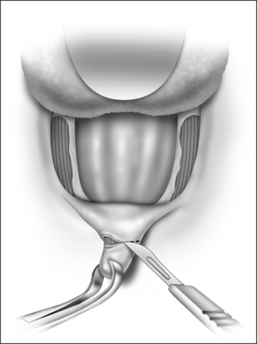 Fig. 32.2 The uvula is grasped with Allis forceps and retracted anteriorly. A curvilinear horizontal incision is made on the mucosa at the base of the uvula posteriorly, preserving almost the entire posterior soft palate mucosa.