Fig. 4.1
Indirect anchorage from bonded segmental wires bonded to miniscrews inserted in the anterior mandibular alveolus was used to support several aspects of treatment: (1) effective maintenance of the leeway space as second premolars erupted, (2) preventing mesial molar movement (i.e., anchorage loss) as teeth were retracted using elastic thread into the residual leeway space to resolve crowding, (3) support for Class II elastics; (4) direct anchorage for intrusion of lower anterior teeth with elastic thread. This scenario offered a one-stage approach to resolving mild-to-moderate dental crowding without introducing the instability of mandibular expansion. Note: It would have been preferable to avoid the application of orthodontic brackets on the anterior teeth until after the retraction of premolars had created space
In this scenario, the leeway space was not violated by mesially moving molars and, as a result, the Class II molar relationship would not spontaneously improve. Class II intermaxillary elastics were added, and the lower incisors were controlled anteriorly and vertically by means of the miniscrew-supported sectional “arms” (i.e., assisted in preventing untoward flaring of incisors and maintaining some vertical control). Consequently, preservation of leeway space (to correct dental crowding without intercanine expansion) and simultaneously counteracting the negative effects of Class II elastics (e.g., maintaining mandibular incisors upright over the bone and reducing extrusion of mandibular molars) are certainly laudable goals for miniscrews, especially when they are accomplished in a single phase of treatment. Caution is warranted in regard to the potential for unintended impaction of permanent second molars in some cases when preserving leeway space and especially during unstable 2-phase mandibular expansive treatments [23, 24].

If Class II correction is not initiated until the eruption of the permanent dentition, this does not necessarily mean that we have missed our golden opportunity, especially if miniscrews are to be employed to assist in the battle over compliance and anchorage issues. Miniscrew success rates are certainly poorer and less predictable with preadolescent patients as they exhibit less mature alveolar bone and fewer reliable insertion sites (i.e., favorable interradicular sites are virtually nonexistent between primary teeth). As an upshot, most miniscrew-supported Class II correction methods are designed to begin after the eruption of the adult dentition and include:
1.
En masse retraction
2.
Fixed functional appliances
3.
Molar distalization
4.
Support for retraction after extraction (not discussed in this chapter)
It would seem obvious in a non-growing patient with a protrusive maxilla that the en masse retraction of the maxillary dentition could be incredibly beneficial. But can we really retract the entire maxillary dentition?
What are the effects for the growing patient, especially if they are deemed to be deprived of a sufficient mandible? Wouldn’t addressing the maxilla with retraction be prima facie evidence of treating the wrong jaw?
We previously noted that whether forces are directed to the maxilla or the mandible in a growing patient, the majority of correction comes from the interruption of the dentoalveolar compensation mechanism [3, 25]. No matter what, the biomechanics of en masse maxillary retraction are identical for adolescent and adult patients. Meanwhile, growth will do what it does for the adolescent, but in the background [2]. The arrangement of the occlusion is adjusted by orthodontic treatment while growth benefits a grower [9, 26]. Without growth, obviously more dentoalveolar correction is required (additional miniscrews have been suggested) [27] or alternatives involving extractions or surgery may be considered for more significant discrepancies.
Figure 4.2 demonstrates an adolescent with a mild Class II Division 1 malocclusion treated with full-fixed orthodontic brackets. Distal en masse retraction was accomplished using simple, direct anchorage derived from miniscrews inserted into the buccal alveolus between the maxillary first molars and second premolars [28]. Typical elastic orthodontic “chain” was regularly re-applied from the miniscrews to T-pin hooks inserted in vertical slot canine brackets. Interruption of dentoalveolar compensation accompanied mild retraction of the entire maxillary dentition, accounting for the predictable correction. No patient compliance with headgear/elastics was required, nor were untoward side effects from those devices (i.e., lower incisor tipping, extrusion of molars, change in vertical dimension and occlusal plane) possible. 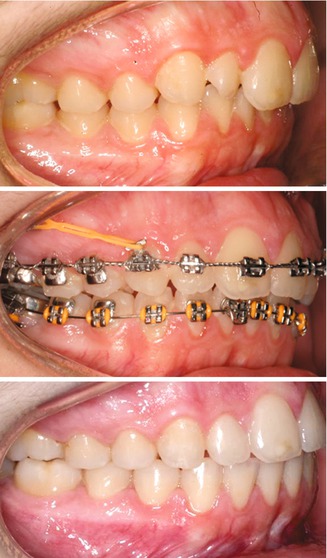 Fig. 4.2
Distal en masse retraction applied using elastic chain stretched from miniscrews in the maxillary buccal alveolus to full-fixed appliances. No compliance was required nor anchorage loss experienced during the resolution of this Class II relationship for an adolescent patient
Adult en masse maxillary retraction is depicted for two patients in Fig. 4.3. The left-side images show a male with a Class II malocclusion featuring a deep overbite. Miniscrews inserted between the lower lateral incisors and canines were employed as direct anchorage for elastic chain to intrude the mandibular anterior teeth to resolve the overbite. Miniscrews were also placed between the upper first molars and second premolars to provide direct anchorage support for distal en masse retraction of the maxillary dentition to Class I. The right-side photographs illustrate an adult female who transferred into care with an unresolved left-side Class II relationship and midline deviation. Simple en masse retraction biomechanics were successful using a single miniscrew for direct anchorage. 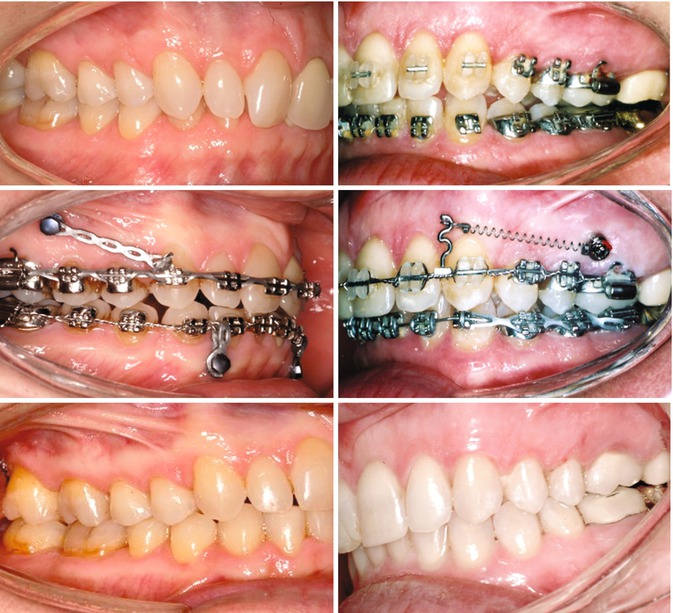 Fig. 4.3
Simple, direct anchorage support for Class II en masse retraction forces applied from miniscrews to the dentition with elastic chain for an adult male in the left-side photos and with coil springs for the female on the right side

If one accepts the notion that Class IIs are primarily an issue of deficient mandibles, then it would seem a small leap to focus efforts on treating mandibles. This premise presumes that a particular type of orthodontic therapy will actually address the assumed primus inter pares cause of Class IIs: altering mandibular development. In the late 1800s, multiple methods of holding the mandible forward (i.e., devices to produce bite-jumping or treat “tongue-swallowing” (apnea)) were introduced, and they continued to evolve into today’s family of fixed and removable functional appliances.
In the battle of anchorage loss and compliance, removable functional appliances fail on both accounts, so we will address only the fixed varieties of mandibular-focused treatments. There are perhaps hundreds of proprietary devices in the orthodontic marketplace that are designed to hold the mandible forward into a protrusive position with hopes that subsequent growth will stabilize that correction. A substantial amount of orthodontic research has been conducted to determine the effects of these approaches and compare them to other methods of Class II correction. As noted previously, there appear to be many more similarities than differences among the menagerie of methods available to the orthodontist.
In the crusade for patient compliance while limiting anchorage loss, fixed functionals have adequately addressed the first issue, as long as wearing a somewhat obtrusive jaw-protruding device does not elicit adverse patient cooperation. Unfortunately, all functionals suffer from the same unintended consequences of losing anchorage in the mandible (i.e., “flaring” or labial movement of lower anterior teeth) [29–31]. Not only could this affect long-term stability (as incisors are likely to upright later), but, more importantly, the tipped lower incisors can limit the amount of correction. In other words, more jaw or dental correction may have been desired at the outset of treatment [32], but less correction may be achieved as overjet is prematurely reduced [33]. Consequently, methods to control anchorage loss of the lower anteriors have been recommended when using functional devices. Employing lingual crown torque in lower incisor orthodontic brackets, inserting uprighting springs in vertical slot canine brackets, or even concurrent lip bumpers may help to resist the protrusive forces of fixed functionals [34]. Recently, the addition of miniscrews to provide anchorage support to counteract the mesial component force on the dentition has also been evaluated [22, 35].
In Fig. 4.4, a 12-year-old female with a Class II Division 1 malocclusion with mild crowding, deep overbite, and severe overjet was treated by first leveling and alignment, followed by intrusion of the lower anteriors. Only then were fixed functional, bite-jumping devices applied to affect interruption of dentoalveolar compensation. Two miniscrews were inserted between the mandibular first molars and second premolars. Sectional square wires were bonded with light-cured adhesive into the slotted heads of the screws to serve as “stops” to resist mesial forces on the dentition (maximizing the mandibular response while limiting anchorage loss). In addition, mandibular anterior brackets featuring 10° of lingual crown torque were employed. 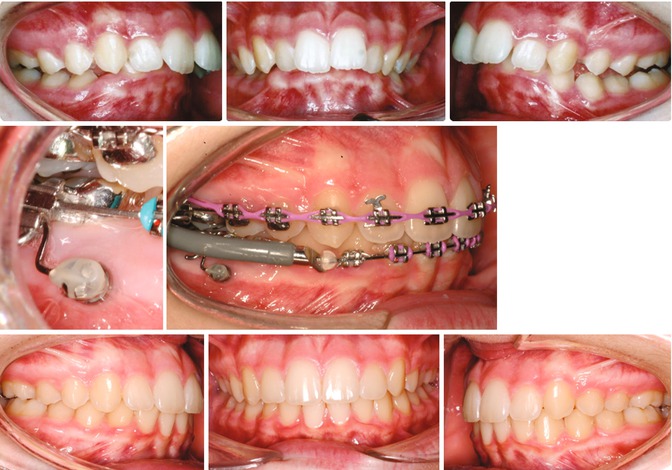 Fig. 4.4
Fixed functional correction of Class II supported by miniscrews inserted in the buccal alveolus between molars and premolars. Sectional supporting wires are bonded into the screw heads and used as support for the molars to counteract the mesial forces from the functionals
An alternative approach for indirect anchorage support for fixed functionals is demonstrated in Fig. 4.5. Cast tubes with soldered sectional wires were slid onto a stainless steel rectangular arch wire. Next, fixed functionals were added to the arch wire inserted into the patient’s orthodontic brackets. The sectional, square wire segments were seated into the slotted heads of the miniscrews and bonded in place with light-cured adhesive. Indirect anchorage from the screws to the base arch wire prevented tipping and intrusion of the lower incisors (to avoid alteration of the occlusal plane). 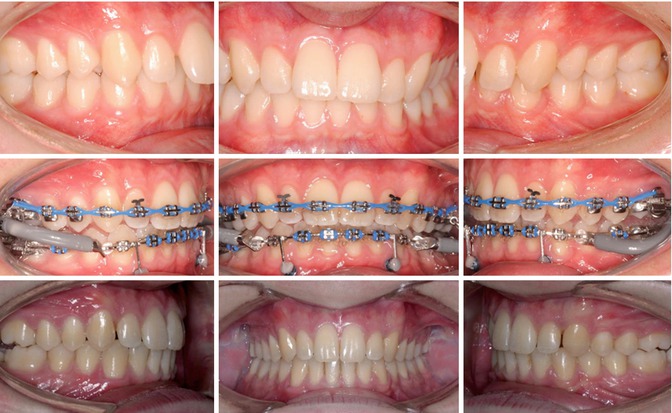 Fig. 4.5
Indirect miniscrew anchorage applied to a mandibular rectangular steel arch wire was used to support fixed functional appliances. The intent was to reduce the iatrogenic loss of anchorage resulting from labial tipping of lower incisors attending the anterior component of force from functionals (and/or Class II elastics). Note: A mild Bolton tooth-size discrepancy necessitated residual space adjacent to maxillary laterals that will be “filled” by esthetic bonding

Molar distalization is simply the first step in an overall process of maxillary retraction. Distalization may be applied to either growing or non-growing, mild-to-moderate Class II patients. Moving the molars back is not the intended goal, but rather a means to the real end—the correction of the Class II relationship. Since moving molars posteriorly has always been challenging, presumably due to the molars’ substantial root surface areas within the alveolar crest, attention to pushing them posteriorly, prior to addressing any of the other maxillary teeth, became the focus. Consequently, the distalization process might seem a contradiction to the proponents of simultaneous distal en masse retraction of all maxillary teeth. As clinical experience continued to meld with research results, it appeared that these treatments might be interchangeable, but perhaps in only certain circumstances. In any event, distalization contributes to the interruption of dentoalveolar compensation, and the amount of mandibular response during the process is the same as was found when forces were directed to the mandible with fixed functionals [2].
Patients with overjets featuring flared, but normally angulated (i.e.,
Only gold members can continue reading. Log In or Register to continue