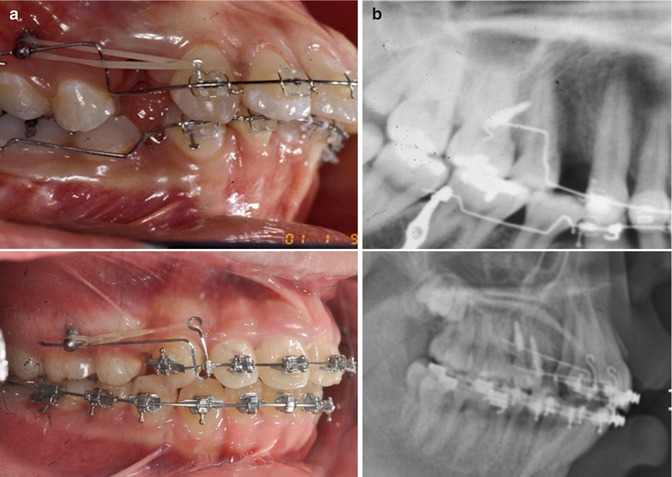 Fig. 2.2
Clinical (a) and radiographic (b) pictures demonstrating the wire insertion at the head part of the C-implant
The C-implant opened up new paradigm of skeletal anchorage in orthodontic treatment. The osseointegration potential has been studied clinically and histologically. Moreover, the survival rate and the clinical applications of C-implants were reported, and these generated changes in orthodontic treatment modalities. First, the SLA-treated C-implants were proved to have osseointegration with the bone (Fig. 2.3). As a measurement of osseointegration potential and related stability of miniscrews, the removal torque values (RTV) of C-implants were studied by Kim et al. to compare the difference in RTV between machined and SLA-treated (C-implant) miniscrews on clockwise and counterclockwise force application on experimental animal model (Figs. 2.4 and 2.5) [4]. Also, it was proved to have increased RTV with longer duration of C-implant placement [5]. There have been debates whether miniscrews remain absolute skeletal anchorage or not with applied orthodontic forces. The positional stability of C-implants was examined with superimposition of the CBCT images, and the result clarified that the C-implants remained absolutely stationary [6]. So, C-implants remain stationary through treatment and, as a result, resist multidirectional orthodontic forces. Since the osseointegrated endosseous prosthetic implant has known to have positional stability, the finding from the CBCT study implies the osseointegration of C-implants. In recent study of Lee et al. on survival rate of the C-implant, they found that the decrease in hazard function can successfully suggest the osseointegration of the orthodontic C-implants [7]. Lastly, in the backscatter SEM examination of the removed C-implants, the direct bone attachment to the implant surface was identified [8]. 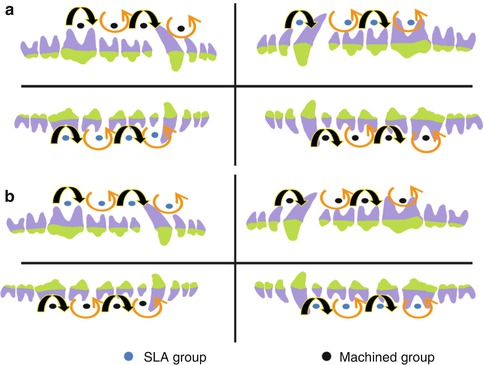 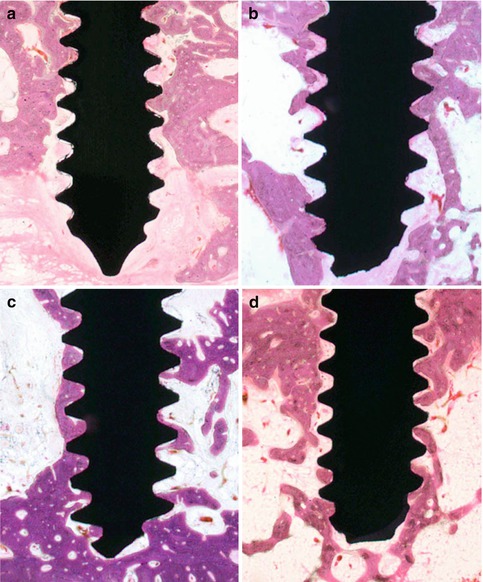 Fig. 2.5
(a) Machined clockwise rotational force. (b) Machined counterclockwise rotational force. (c) SLA-treated clockwise rotational force. (d) SLA-treated counterclockwise rotational force. Histological images showing osseointegration of both machined and SLA-treated miniscrews
Osseointegration of C-implants widened clinical treatment modality by allowing multidirectional orthodontic force applications for intended orthodontic tooth movement. Rotation resistance increased the efficiency and efficacy of force control during orthodontic treatment. Biocreative Orthodontics Strategy (BO) is based on the ability of osseointegrated absolute skeletal anchorage control with C-implant. Ideal patient selections for Biocreative Orthodontics treatment are those who have stable posterior occlusion with anterior crowding with lip protrusion. Without altering the posterior occlusion, BO uses skeletal anchorage for en masse retraction without posterior dental anchorage support. The example of the Biocreative treatment is described below:
A 24-year-old woman presented with the chief complaints of lip protrusion and crowding (Fig. 2.6). Her prior medical and dental history revealed no significant systemic problems and absence of significant temporomandibular joint disorders. The initial clinical findings showed a convex facial profile associated with a retrognathic mandible and protrusive lips. The patient had a large overjet (6.0 mm) and significant amount of crowding in both arches (maxilla 20.0 mm; mandible 11.0 mm). The patient had class I molar relationship with the dental midline of lower arch deviated 4.0 mm to the right relative to the facial midline. Cephalometric analysis indicated a skeletal Class II, a hyperdivergent profile with steep mandibular plane angle, and upright maxillary and mandibular incisors. The patient was diagnosed with skeletal Class II protrusion with severe crowding. 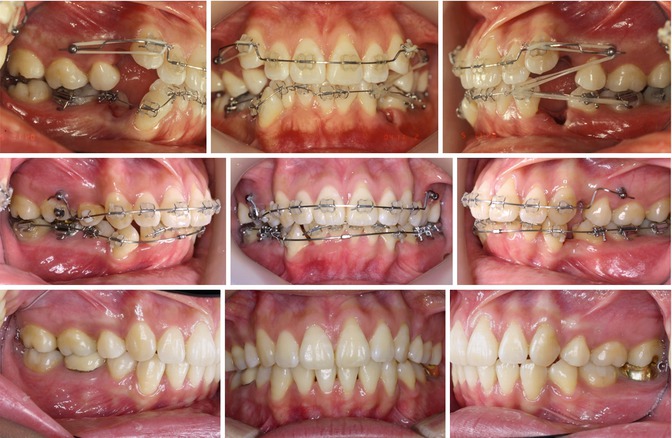 Fig. 2.6
Case treated with two C-implants in the maxillary arch with Biocreative Orthodontics Strategy
Four first premolars were extracted. Two C-implants were placed between the second premolar and first molar in the maxilla. Brackets were bonded only on six anterior teeth in the maxilla during the initial stage of en masse retraction. Upper archwire was bent upward from distal of canines to pass through the head portion of the C-implant. Retraction of six anterior teeth and correction of the midline were performed by elastics. Class III elastic was placed between the maxillary C-implant and lower canine in the right side. When the extraction space was almost closed on the right side, the bracket was bonded on the upper second premolar and the button was bonded on the upper first molar. For detailing, brackets were bonded on all remaining teeth. At the completion of the treatment, soft tissue profile was dramatically improved. Panoramic x-ray revealed acceptable root parallelism without any other complications.
With C-implants, intrusive force can be created from resistance to rotation. The application of intrusive force is described using mousetrap appliance for molar intrusion (Figs. 2.7, 2.8, and 2.9). 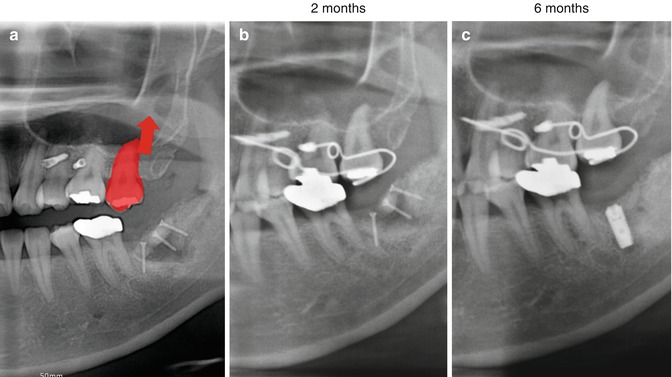 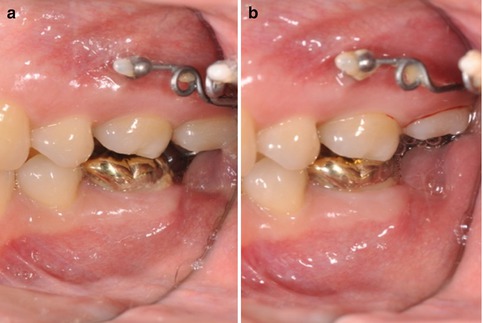 Fig. 2.9
Clinical pictures showing the initial (a) and final (b)
In a patient who needed minor tooth movement for molar intrusion, two C-implants were placed between the second premolar and molar in the buccal and palatal areas. Mousetrap appliance made with TMA archwire is held in the occlusal surface of the molar for intrusion, and 150–300 g of intrusive force is immediately applied. Osseointegration of the C-implant resists the rotational force and is converted into the intrusive force, which then is applied to the molar to intrude the palatal cusp. Because C-implant was identified to be osseointegrated into the bone, the mousetrap appliance can be successfully used with the assurance of resistance to rotational force created by intrusion.
Furthermore, the C-implant can be used in general dentistry as a provisional implant due to the proof of osseointegration. The C-implant design is analogous to endosseous prosthetic implant with the screw part and head part and used for provisional implant system (Figs. 2.10 and 2.11). The head part can be replaced with implant custom-made abutment and tapped into the endosseous screw part. The provisional crown can be fabricated to evaluate the function and esthetic of the final implant crown. It is useful in growing child to maintain space, to function as a provisional crown, and to enhance esthetics until the termination of growth for the future recipient of endosseous implant. If in case of the limited edentulous space for the endosseous implant, the C-implant can act as replacement of choice.