10.7 How to Induce Translation?

Considering the difficulty in measuring the required moment at the bracket level, it is less technique sensitive to use a single line of force near the estimated center of resistance, which is called as the “equivalent force system.”

In order to distalize a single molar, the line of force has to go through the center of resistance. When the posterior teeth are segmented as a unit, they are expected to resistant to tipping, due to the change of the configuration. When distalization of a particular molar segment was indicated, it may be helpful to make the segment into a single unit and use a single line of force from the interradicular miniscrew for fail-safe movement.

Translation of incisors or axis control during retraction using certain combination of retraction force, vertical force, and/or moment at the bracket level is known to be very challenging in lingual orthodontics, because of the lingually positioned vertical force and need for larger moment [15–17]. Moreover, the incisors, unlike the posterior segment, are assumed to be a mesiodistally long segment positioned vertical to the retraction force, which is prone to tipping, like a long single tooth [18]. Instead, one can take advantage of the deep palatal vault to extend a lever arm up to the level of estimated center of resistance or even to the higher level [19].

It has been shown that using a lever arm is practical in lingual orthodontics [20], and it appears that long lever arm is able to induce translation or root movement according to the level of the hook. In the three-dimensional model, however, long lever arms are subject to elastic deformation and outward rotation of incisor segment, which can lead to linguoversion of the central incisors and buccoversion of the canine [21, 22].
When using a lever arm, it is therefore conceivable that the long lever arms should be splinted between the two arms, so that transverse bowing in the anterior region can be prevented (Figs. 10.2 and 10.3). 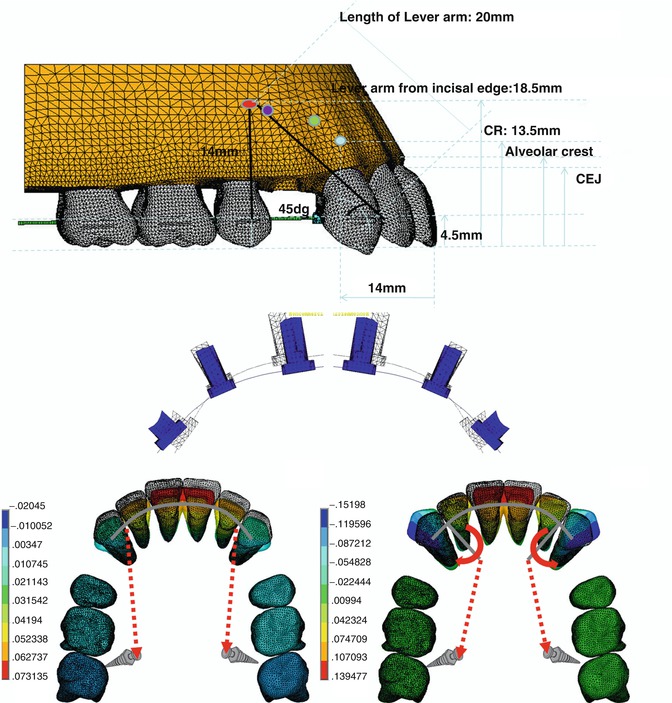 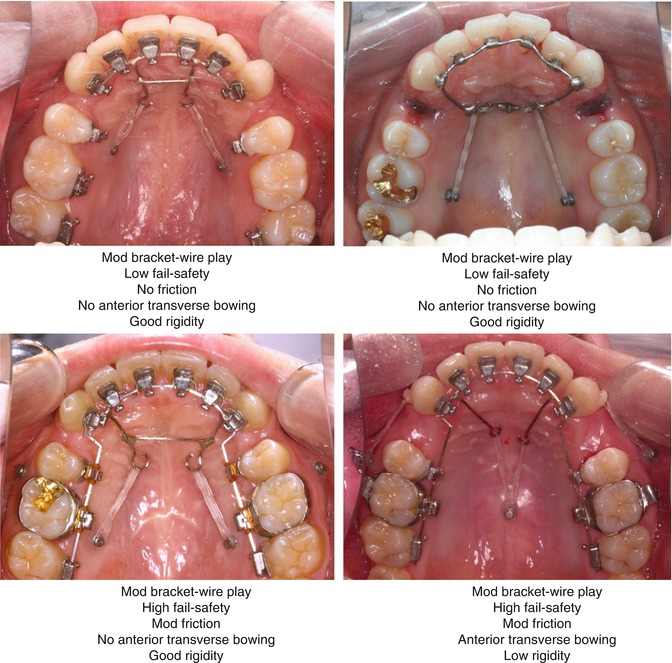 Fig. 10.3
Various lever arm designs and characteristics of each design

In lingual orthodontics, miniscrews can be inserted on either the buccal side or lingual (palatal) side. Since main appliances are placed on the lingual side, miniscrews on the lingual side would allow direct engagement of elastic chains between the archwire hooks and the miniscrew head. Alternatively, splinting between the buccal miniscrews and the attachment on the tooth may be one solution if buccal miniscrews were to be used.
There can be several combinations of the estimated center of resistance and the miniscrew, each of which leads to differences in line of force and resultant tooth movement (Fig. 10.4a). It is noteworthy that the midpalatal miniscrews can change not only the angulation of the vector but also the presumed point of force application projected at the incisor, due to the distance between the lever arm hooks and the incisor body. Resultant type of tooth movement has to be carefully estimated and interpreted based on the findings in the cephalogram. 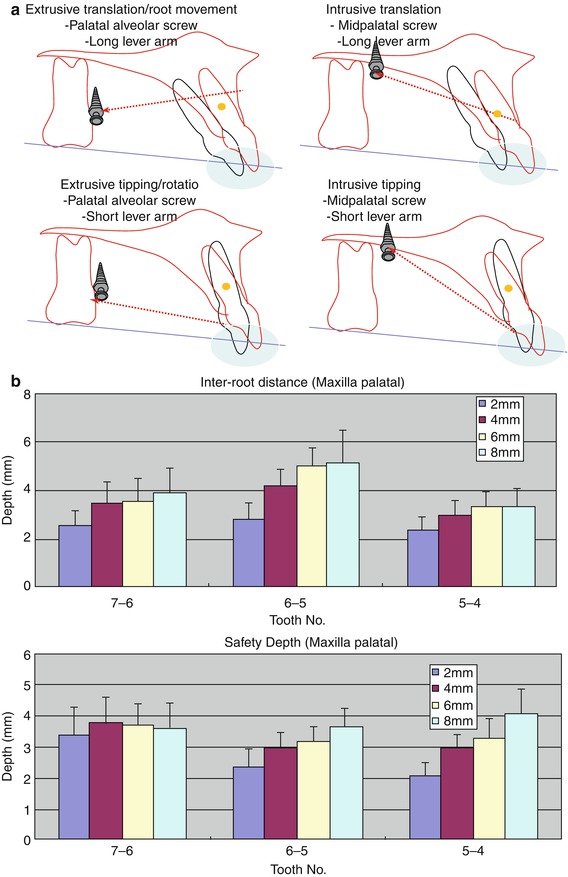 Fig. 10.4
(a) Combined use of lever arms and miniscrew positions. (b). The interradicular space on the maxillary palatal side (Modified from Lee et al. [23])
Maxillary buccal and/or palatal miniscrews can be used for molar distalization and incisor retraction. Since maxillary buccal areas exhibit around 3 mm of interradicular space, vertical angulation of the insertion path is recommended to avoid possible root damage [23]. In contrast, palatal sides display larger interradicular area due to the presence of palatal single root of molar (Fig. 10.4b). Midpalatal areas exhibit sufficient bone thickness near the midline. However, the parasagittal area is supported by a thin cortical bone and is not considered as an insertion site [19]. Mandibular interradicular and retromolar areas are also considered as reliable insertion sites. The root surface area of mandibular incisors is much smaller than that of the maxillary incisors. The mandibular miniscrews therefore can be useful for the control of posterior segment, either distalization or protraction [24, 25].

In order to better understand the etiology of specific malocclusion and to establish a precise plan, a midline-based diagnosis may be helpful. Conventional orthodontic diagnosis using lateral cephalogram provides some information in the sagittal and vertical planes; however, it hardly gives differential information between right and left sides. For example, in case of denture midline deviation, one has to distinguish whether it comes from asymmetric molar position or simple deviation of incisors. For the former case, asymmetric molar distalization should precede the incisor alignment, and for the latter, symmetric anchorage preparation regardless of the amount of midline deviation has to be made (Fig. 10.5). 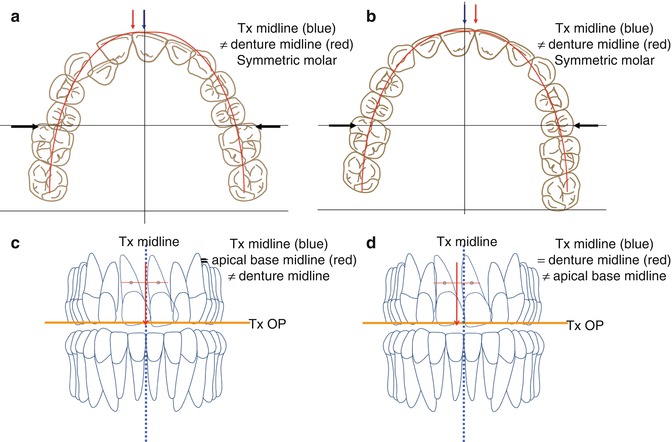 Fig. 10.5
(a, b) Midline deviation with or without symmetry of the molar, indicating the need for posterior segment control prior to incisor movement or alignment. (c, d) Assessment of apical base midline. The midline correction on the left side is easier than the right side
Definition of each midline is summarized in Table 10.1. Among the various midline terms, what the patients easily recognize may be the denture midline and soft tissue midline. The orthodontists can further define the skeletal, apical base and geometric midlines, using various radiologic and model analyses. Considering the patients’ satisfaction and better communication, the soft tissue midline is well selected as the treatment midline. In terms of treatment planning, the apical base midline rather than denture midline is readily chosen as the representative of the anatomical midline. It is the best if the apical base midline is located on the same line as the soft tissue midline. Then, the treatment should be performed based on the diagnosis. If there is significant discrepancy between the two lines, the anterior segment needs to be translated to either side without “burning” the anchorage. This is important especially in the maxilla since the root surface area of maxillary anterior segment is normally larger than that of the mandibular incisors (Table 10.1).
Table 10.1
Definition of each midline

Since orthodontic treatment in adults may demand selective movement of specific tooth or segment of teeth, using a continuous arch is not justified. Along a continuous arch between anchor segment and moving segment, it is not easy to anticipate the amount of anchorage loss. Related to this, strength of the use of miniscrews in lingual orthodontics may be that they enable the precision movement of the specific segment without any movement of anchorage segment via effective combination of the miniscrew position and lingually extended lever arms.
Since miniscrew provides a force vector apart from the dental arch, the segmental movement takes place without the expense of anchorage segment. This implies that the inconsistent movement within the arch, for instance, total arch movement to the same direction, can be achieved. The treatment plan is specifically defined at each segment, with the midline as a major landmark.
Case 1
A 26-year-old woman presented with lip protrusion. Initial cephalometric analysis revealed a skeletal Class I pattern with slight lip protrusion. In spite of her chief complaint, she had a prominent chin, which masked the protrusion of lips to certain degree. The upper and lower denture midline was coincident, but there was significant denture midline deviation by 2.5 mm relative to the facial midline, which was associated with her underlying facial asymmetry. The amounts of crowding in both arches were minimal (Fig. 10.6a
Only gold members can continue reading. Log In or Register to continue