Uvulopalatopharyngoplasty (UPPP) is the single most common surgical procedure performed for the correction of retropalatal obstruction causing or contributing to the obstructive sleep apnea/hypopnea syndrome (OSAHS). Although its success rate has been reported at only 40% (when objective success is defined as a 50% reduction in the Apnea/Hypopnea Index (AHI) with a postoperative AHI of less than 20),1when appropriate patient selection criteria are applied its success rate can be as high as 80%2 (see Chapter 16: Friedman tongue position and the staging of obstructive sleep apnea/hypopnea syndrome).

UPPP’s effectiveness also increases dramatically when performed in combination with several adjunctive procedures that address the hypopharynx, like radiofrequency tongue base reduction.3 Many studies, however, still show a considerable failure rate.

When patients are not willing to accept CPAP as a form of permanent treatment, they often seek a surgical alternative. A modified version of UPPP for patients without tonsils, Z-palatoplasty (ZPP),6 is presented in Chapter 33. In this chapter, we present further modifications of this technique for patients requiring revision of a previously performed UPPP due to persistent or recurrent symptoms.

Selection criteria follow the classification guidelines already described by Friedman et al.7 Patients with Friedman tongue position (FTP) III or IV must have adjunctive treatment to increase the retrolingual airway, in addition to revision palatal surgery. Candidates for revision UPPP may have had a history of previous UPPP or laser-assisted uvulopalatoplasty with tonsillectomy. It is important that before undergoing UPPP revision by ZPP (as is true for all surgical procedures aimed at the treatment of OSAHS), the patient undergoes a 30-day CPAP trial, in order to document failure of this alternative as a permanent form of management, based on compliance issues. Physical exam should focus on documenting the presence of an obstruction at the level of the soft palate, and it should assess the likelihood of retrolingual obstruction by means of FTP. In addition, it should either confirm or rule out the presence of nasopharyngeal stenosis by means of fiberoptic nasopharyngolaryngoscopy and Mueller maneuver. Sleep endoscopy may provide additional evidence of persistent retropalatal obstruction.8 Even if not routinely performed, sleep endoscopy is especially valuable for evaluation of revision surgery patients. Adequate medical clearanceand a thorough review of the procedure and its complications, such as temporary velopharyngeal incompetence (VPI) and, most importantly, the risk of permanent VPI, should be conducted with the patient before obtaining consent.

The concept of revision UPPP is similar to ZPP, with modifications based on the presenting anatomy, and on scar tissue from previous interventions. The underlying principles, as well as the goals, remain the same: (1) excision of mucosa only; (2) splitting of the soft palate in the midline, in order to create two Z-plasty flaps for reconstruction; and (3) a very meticulous two-layered closure. The goal is to increase the retropalatal space in both the anterior–posterior dimension, as well as in the lateral dimension. In addition, the procedure often corrects significant nasopharyngeal stenosis, when present.

The surgical technique is illustrated in Figures 62.1–62.6. Two adjacent flaps are outlined on the palate (Fig. 62.1). The flaps for revision surgery will generally be smaller than in primary ZPP, depending on the length of the previously resected soft palate. Only mucosa of the anterior aspect of the two flaps is removed (Fig. 62.2). The two flaps are then separated from each other by splitting the palatal segment down the midline (Figs 62.3 and 62.4). A two-layered closure that brings the midline all the way to the anterolateral margin of the palate is accomplished (Figs 62.5 and 62.6). The final result creates a distance of 3–4 cm between the posterior pharynx and the palate. Additionally, the lateral dimension of the palate is usually doubled to approximately 4 cm. The exact dimensions of the flaps, which extend in a butterfly pattern, are illustrated in Figure 62.1. The anterior midline margin of the flap is halfway between the hardpalate and the free edge of ‘a normal’ soft palate. The distal margin is the free edge of the palate, and the lateral extent is posterior to the midline, and all the way to the lateral extent of the palate. 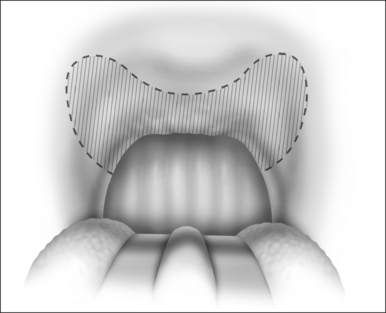