Revision Surgery with Limited Excision in the Parotid Area

Revision Surgery in the Submandibular Triangle

Treatment of recurrent pleomorphic adenoma is a challenge. Owing to its histomorphological features, pleomorphic adenoma is by far the most frequent recurrent benign tumor in the salivary glands. Although these characteristics have been well documented, up to 5% of salivary gland pleomorphic adenomas recur. Indeed, in the majority of cases it would be more accurate to speak of residual disease, since most patients following surgery have never been tumor-free and the residual disease has progressed slowly over time, usually years, to a stage at which a tumor, nodule, or mass becomes clinically palpable or visually obvious, or on occasions detectable on radiological imaging.

In contrast, a recurrent Warthin tumor is normally new disease, as Warthin tumor can occur at multiple locations synchronously and metachronously, either ipsilateral to the primary disease or on the contralateral side.1

In patients who have previously undergone enucleation of benign salivary gland tumors, the reported local recurrence rates range from 20%–45% when surgical management of a pleomorphic adenoma is repeated. After complete excision of the tumor using a parotidectomy technique, the reported local recurrence rates are in the range of 1%–5%.2,3 It is thought that surgical dissection and manipulation close to the pseudocapsule of a pleomorphic adenoma increase the risk of incomplete tumor resection, or of disrupting or traumatizing the capsule, leading to tumor spillage.4 Associations between recurrent tumor and female sex or young age at the initial treatment have also been reported.5

Diagnostic errors may occur, such as mistaking a lump for a lymph node—leading to local dissection, with a high risk of tumor enucleation and the associated increased risk of recurrence. It has been speculated that some surgeons may tend to make smaller incisions, providing less space for accurate tumor visualization and leading to poorer results in young and especially in female patients. In the clinical differential diagnosis of parotid lumps in young patients, a lymph node may erroneously be regarded as more likely than a parotid tumor.

After limited surgery involving anything less than a classic lateral parotidectomy, recurrence rates of 5%–12% have been reported for Warthin tumor. Warthin tumors can occur in multiple locations both synchronously and metachronously in the same salivary gland (mainly in the parotid gland), or bilaterally. The risk for bilateral Warthin tumors correlates directly with the amount of nicotine intake. Smoking is the only well-defined risk factor, but its role in ipsilateral recurrence is not clear. A contralateral tumor is not problematic, as the treatment is still surgical removal. If the theory of multilocular appearance is correct, then “ipsilateral recurrences” do not belong to the area of primary surgery.

Any new mass arising in the area of the original surgical procedure should prompt further investigations of a likely tumor recurrence. Typically, patients are the first to notice the presence of a new mass, after palpating the surgical area themselves. Owing to the benign nature of the lesions, the presence of a mass is the only abnormality or symptom. If there are other symptoms such as pain or facial nerve weakness or palsy, it is most unlikely that the tumor is benign. Malignancies can arise in patients who have had a clinically benign tumor for years or who have had a benign tumor excised previously. In these patients, active inquiries should be made about other symptoms in order to detect changes in symptoms or clinical signs of malignancy as early as possible.6

A surgical report of any prior surgery is particularly valuable, as it provides information about the extent of the previous operation and the likely extent and exposure of the facial nerve. The size of the skin incision is helpful for estimating the extent of previous surgery, particularly when a surgical report is not available. Small incisions 3–5 cm long in the submandibular or preauricular region suggest that primary surgery was carried out for a working diagnosis of an enlarged lymph node in the neck or parotid region. If a patient presents with a recurrent parotid tumor and the scar is not one typically used for parotid or submandibular surgery, or a modified facelift incision, then the extent of the previous operation is doubtful.

If the patient reports postoperative facial weakness or palsy lasting several weeks, or has had facial nerve weakness ever since the previous operation, then the likelihood of temporary or permanent facial palsy increases by 10%–25% if revision surgery for a recurrent benign salivary gland tumors is carried out. The diagnostic work-up in patients with a previous pleomorphic adenoma is more complex than in patients with other recurrent benign tumors.

The number of recurrent nodules that are palpable is always much lower than the actual number of nodules. Uninodular recurrences are possible but are relatively rare. Histopathological examination of resected specimens identifies multinodular recurrences in all patients. The mean diameter of the nodules is 20 mm, but almost all patients also have nodules smaller than 1 mm. Ultrasound assessment of the affected area provides a fast overview of the likely physical situation, but due to tissue scarring and the small size of the nodules, it is not capable of detecting all of the nodules with sufficient sensitivity. Ultrasound is also helpful for needle positioning in fine-needle aspiration cytology, but the negative predictive value is not high enough to exclude malignant transformation with certainty.7

Magnetic resonance imaging (MRI), especially with T2-weighted spin echo imaging, is recommended as the standard assessment tool (Fig. 24.1). Even MRI is not capable of detecting all nodules, particularly those smaller than 5 mm, but it can help define the topographic dissemination of the recurrent tumor nodules.8 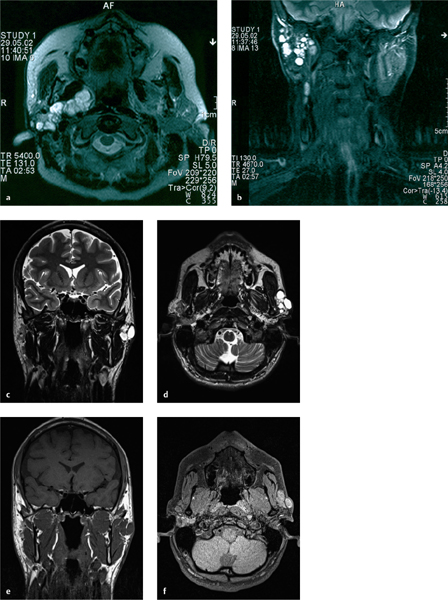 Fig. 24.1 a–f Typical examples of multinodular recurrent pleomorphic adenoma of the parotid gland on magnetic resonance imaging at 1.5 T (a, b) and 3.0 T (c–f). Spread is seen all over the parotid gland deep into the medial lobe (a, b), as well as typical subcutaneous recurrent nodules in the previous incision area (c–f).

If the histological findings from the primary operation are available, ultrasound is normally sufficient for detecting the recurrent tumor and confirming the diagnosis. In patients with Warthin tumor, multilocular and bilateral recurrences have to be ruled out. Only a deep location in the inner lobe sometimes makes it necessary to assess the extent of the tumor using MRI or computed tomography (CT). The same rules as for Warthin tumor also apply to other recurrent benign tumors.

Surgery is the treatment of choice for benign tumor recurrences, which are most often seen in the parotid gland. Recurrences in other locations are less common, but local excision is also indicated. Patients who have recurrences of a parotid pleomorphic adenoma following enucleation, local excision, or limited parotidectomy are candidates for revision parotidectomy or even extended parotidectomy (Figs. 24.2 and 24.3). The risk of repeated recurrence is lower after parotidectomy than after limited excision, as parotidectomy removes not only the visible larger nodules but also many smaller and less visible ones. The old scar line should not be used as a reliable landmark for surgical exploration in patients with previous operation. Recurrent nodules can occur along, within, and beyond any previously created scar line. Patients with tumor recurrences after a primary parotidectomy are candidates for local excision surgery (ultrasound and MRI should confirm that most of the salivary tissue has already been resected) (Fig. 24.4). In patients with Warthin tumor or another benign recurrent tumor, the resection can be limited to the tumor region or regions detected.

The timing of the operation must be individualized to each patient. In patients with a first recurrence in the parotid gland, primary enucleation or limited excision and parotidectomy within the following months offers the highest chance of locoregional control. If only local excision is planned, arguments for performing surgery within the next few months are firstly, that the larger the nodules become, the greater the risk of complications; and secondly, that an increasing time interval since the previous operation is a theoretical risk factor for malignant transformation.

The patient should receive the same information as for primary surgery (see Chapter 22). The risk of subsequent facial palsy is greater after revision surgery; most patients develop at least some degree of facial nerve weakness. Up to 25% of patients develop permanent weakness in at least one of the facial nerve regions. The strategy for surgical exploration needs to be discussed openly with the patient before the operation and a decision has to be taken as to what form of excision should be carried out if a nodule is encountered that is adherent to a branch or to the trunk of the facial nerve. Preservation of the facial nerve or branch will increase the risk of incomplete resection, and conversely, radical surgery will increase the risk of permanent facial weakness. In most situations, it is recommended to minimize nerve damage and avoid sacrifice of the nerve, at the expense of radicality.

General anesthesia is necessary if revision and extended parotidectomy are planned. If only selective excision of a few small subcutaneous recurrent nodules is planned, local anesthesia is an alternative to general anesthesia. The patient is placed in the supine position with the head rotated to the opposite side. 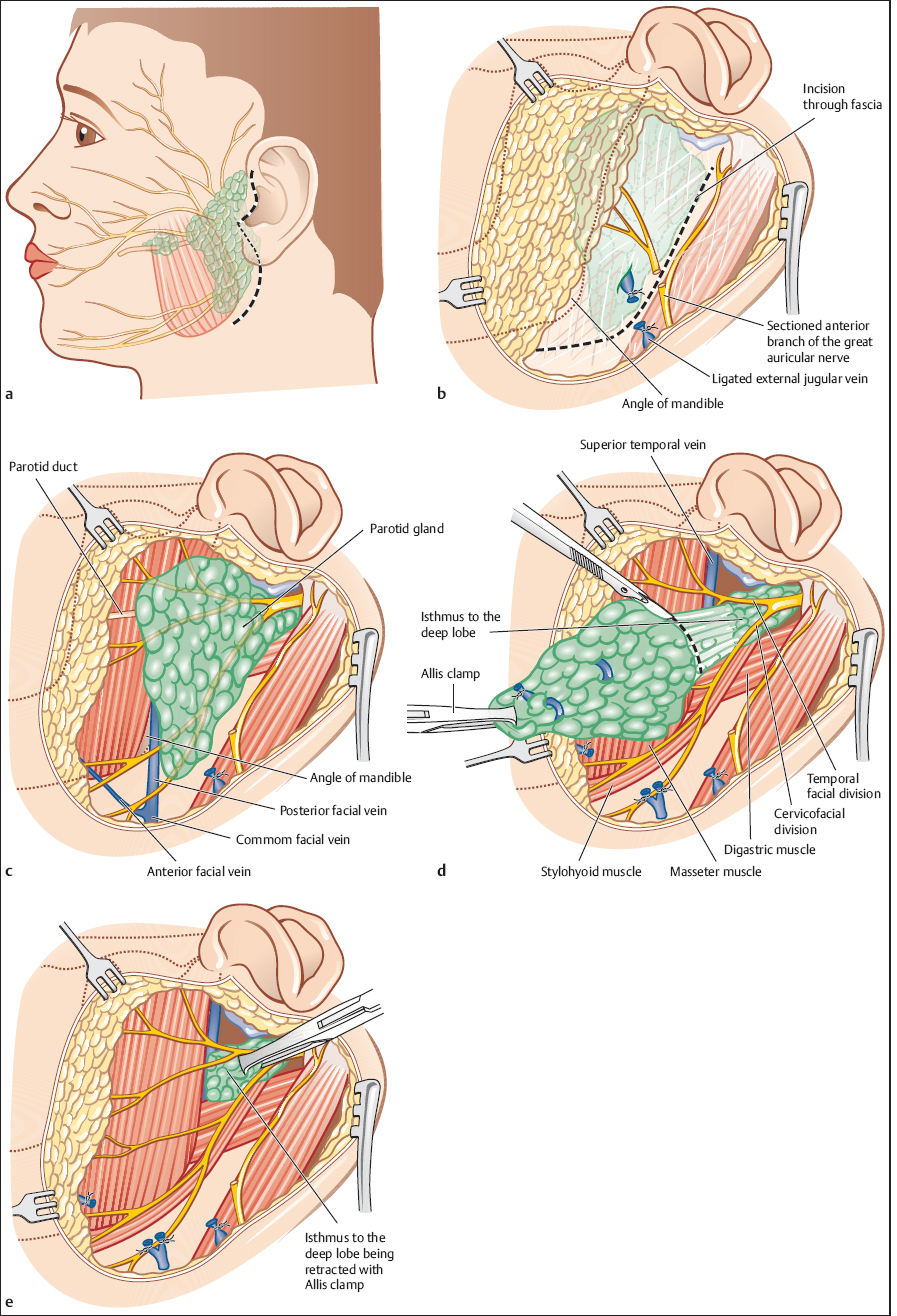