and Julius B. Richmond2

(1)
Cleft Palate Craniofacial Center, University of Illinois, Chicago, IL, USA
(2)
Department of Plastic Surgery, University of Illinois, Chicago, IL, USA
Abstract
The Pierre Robin sequence will show hypoplasia of the mandible (micrognathia cleft palate/glossoptosis) causing retraction of the sternum synopsis and malnutrition. This study will show cephalometric changes that can occur over time. There are a number of surgical or nonsurgical procedures that can be utilized during the early neonatal period that can be beneficial. This chapter will show the superimposed palatal tracings that reveal the progressive growth of the cranial vault, the maxilla of the middle face, as well as the increasing mandibular length. This chapter shows the longitudinal outcome studies using records from birth to adolescence and demonstrates how there are extensive variations in osteogenetic deficiency and facial growth patterns even within the same cleft type.
With some additional photographs by Samuel Berkowitz, DDS, MS

12.1 Growth of Mandible in Infants with Micrognathia (Pruzansky and Richmond 1954)

Since Pierre Robin first described the syndrome of hypoplasia of the mandible, cleft palate, glossoptosis, inspiratory retraction of the sternum, cyanosis, and malnutrition which has come to bear his name (Robin 1929, 1934), numerous reports of cases have appeared in the literature. The fatal termination of some cases is a testimony of the serious nature of the syndrome. Although a variety of mechanical and surgical therapeutic procedures have been suggested (Eley and Farber 1930; Davis and Dunn 1933; Callister 1937; Lleweyllyn and Biggs 1943; Douglas 1946; Nisenson 1948; Longmire and Sandford 1949; May and Chun 1948), a rationale for the proper management of individual patients has not been adequately presented. It is the purpose of this communication to present observations from the serial studies of patients with this disorder, upon which a physiologic approach to management may be based.
It is generally agreed that the pathophysiologic events in this syndrome are as follows: the receding chin fails to support the tongue in its normal forward relationship and hence fosters the glossoptosis. The retroposed tongue impinges against the posterior wall of the pharynx, obstructing inspiration and impeding feeding. Slight excess in mucus or saliva tends to enhance the pharyngeal obstruction and may precipitate severe cyanotic seizures, resulting in death. Starvation and respiratory infections, or both, may follow as a consequence of the chronic glossoptosis.
Since the major symptoms are definitely related to the micrognathia, it was of special interest to focus our attention upon the growth of the mandible in these infants. In reviewing the published case reports, it appeared that two questions, basic to an understanding of a more appropriate management of these cases, remained unanswered. The first question could be phrased as follows: How soon would mandibular growth be sufficient to accommodate the tongue and hence insure a more adequate airway? This is assuming that the infant could be placed in an adequate metabolic climate. The answer to this question would have an important baring on immediate management. The second question is related to whether or not mandibular growth would be sufficiently sustained to provide an esthetically satisfactory facial profile.
The answer to these questions had to await the development of accurate roentgenographic techniques for measuring the growth of the head in infants, which made it possible to undertake a serial study of the growth of the micrognathic mandible. The results of these investigations have provided useful information as a basis for therapy and prognosis.
During the past 25 years, cephalometric roentgenography has produced valuable information pertaining to the growth of the head in normal (Brodie 1941a, b) and pathologic conditions (Brodie 1941a, b) in man. In addition to the cephalometric roentgenographic measurements, dental impressions of the maxillary arch were obtained at regular intervals. The impressions were cast in dental stone and then subjected to various measurements. The infants were recalled for study every 3 months during the first year of life and twice annually until the age of 5 years. Thereafter, they were observed annually.
From a large series of similar cases now under longitudinal study at the Cleft Palate Center of the University of Illinois (Pruzansky 1953), we have selected three cases for presentation. At birth, each of these infants presents an isolated cleft of the palate and mandibular micrognathia. Despite these similarities, certain important differences existed to vary the management and progress of each infant. The differences to be described in each of these cases represent the major variations which we have encountered in our experience with this syndrome. For the sake of brevity, the case history will be confined to such information as is directly pertinent to the purpose of this chapter.

At 2 months of age, D.R.P., a small white dehydrated baby girl, was admitted to the Research and Educational Hospital, with the principal complaint of intermittent pneumonitis for the previous 5 weeks. After a normal full-term spontaneous delivery, it was noted that the baby had an isolated cleft palate and a small mandible. The birth weight was 5 lb 13 oz (2,640 g). Feeding had been difficult because of the tendency of the baby’s tongue to fall back into the pharynx. There was no history of a cleft on either side of the family. The mother gave no history of being exposed to a contagious disease or other illness during her first trimester of pregnancy (Fig. 12.1).

Fig. 12.1
(a) Serial cephalometric tracing of a child with Pierre Robin sequence showing a severely micrognathic mandible. At 3–4–13, there is a big increase in the ­pharyngeal space (darkened area). (b) Superimposed tracings at 2 months and 10 days (0–2–10) and 3 years, 4 months, and 13 days (3–4–13) shows a rapidly growing micrognathic mandible (Reprinted with permission from Pruzansky (1953))
Because of the patient’s congenital defects, she presented primarily a feeding problem. An attempt was made to design an obturator so that the baby could be bottle-fed. This was met with failure, and gastric gavage was necessary. However, the patient did not gain weight and continued to do poorly. Approximately 1 month after admission, it was considered that a tracheotomy was the only procedure which might ­possibly save the baby’s life. After the tracheotomy, respiration was greatly facilitated, and soon the patient was removed from the oxygen tent. Her improvement thereafter was constant. The patient was discharged from the hospital 3 months after admission, at 5 months of age.
Growth Studies: Oral examination disclosed a cleft involving the one-half of the hard palate and extending posteriorly throughout the length of the soft palate. Ptosis of the tongue was evident.
On the fifth day following the tracheotomy, at the age of 3 months 1 day, the first lateral film was obtained without sedation. A tracing of this film revealed that the head was in slight dorsiflexion, the position of greatest comfort for the infant. The relative smallness of the mandible and its effect on the facial profile was self-evident. In relation to contiguous anatomical structures, the posture of the tongue was abnormal. It projected through the cleft in the palate into the nasal cavity (Fig. 12.2). 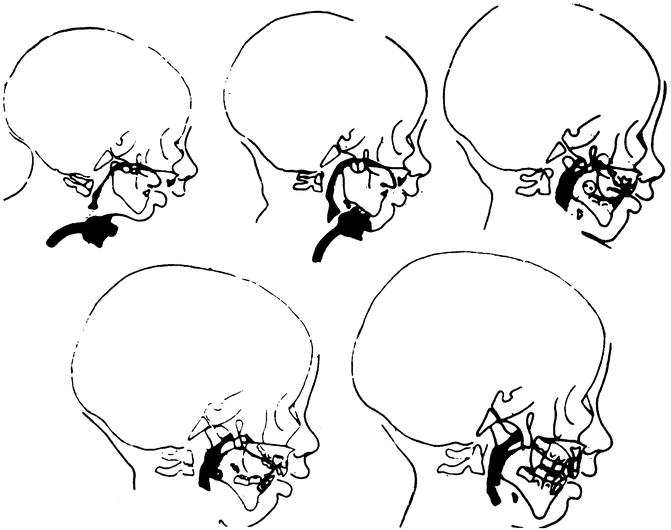