Pathophysiology and Consequences of Dental Trauma

Pathophysiology and Consequences of Dental Trauma

1 Describe the pathophysiology and effect of trauma.

2 Describe healing events after uncomplicated (separation) injuries to the pulp and periodontium.

3 Describe healing events after complicated (crushing) injuries to the pulp and periodontium. 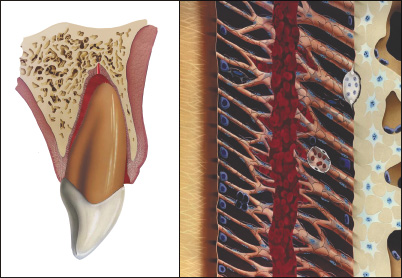 A traumatic dental injury represents acute transmission of energy to a tooth and its supporting structures, which results in fracture and/or displacement of the tooth and/or separation or crushing of the supporting tissues (gingival, periodontal ligament [PDL] and bone).5,6 In cases of separation injury (e.g. extrusive luxation), the major part of the injury to the supporting tissues consists of cleavage of intercellular structures (collagen and intercellular substance), with limited damage to the cells in the area of trauma. This implies that wound healing can arise from existing cellular systems with minimal delay. 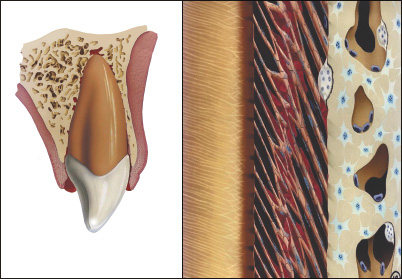 In contrast to separation injury, in a crushing injury (e.g. lateral luxation and intrusive luxation), there is extensive damage to both cellular and intercellular systems; consequently, damaged tissue must be removed by macrophages and/or osteoclasts before the traumatized tissue can be repaired. In this type of injury, several weeks are added to the healing process and this is reflected in the recommended splinting period. 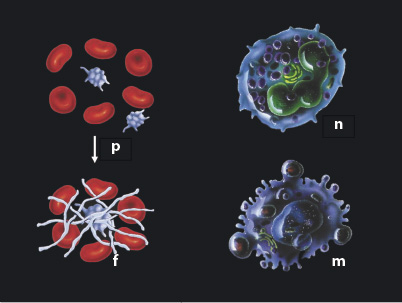 The immediate events following trauma include bleeding from ruptured vessels followed by coagulation.5,6 In the Figure, components of the pathophysiologic response are described. Platelets (p) in the coagulum play a significant role, not only in transformation of fibrinogen to fibrin (f), but also due to their content of growth factors (e.g. platelet-derived growth factor [PGDF] and transforming growth factors [TGF]-β), which initiate the wound healing process. Thereafter, an influx of neutrophilic leukocytes (n) and macrophages (m) occurs. The first cell type is concerned with infection, while the latter clean the area of damaged tissue and foreign bodies, assisting the neutrophilic leukocytes in defending against or combating microbial colonization, and finally in taking over the platelets’ role in directing wound healing events.5,6

Wound healing events comprise revascularization of ischemic tissue and formation of new tissue in case of tissue loss (Figure A). In both instances, wound healing takes place by a coordinated movement of cells into the traumatized area, where macrophages (m) form the healing front, followed by endothelial cells (e) and fibroblasts (f). Vascular loops are formed in a stroma of tissue dominated by immature collagen (Type III) and proliferating fibroblasts. These cells are synchronized via chemical signals released by the involved cells and the surrounding tissue.5 This phenomenon has been termed the wound healing module (Figure B), and appears to advance in the pulp and periodontium with a speed of approximately 0.5 mm a day.6

The few experiments carried out on uncomplicated luxation injuries indicate the following about the type and chronology of healing:

PDL: After 1 week, new collagen formation starts to unite the severed PDL fibers which leads to initial consolidation of a luxated or a replanted tooth. After 2 weeks, repair of the principal fibers is so advanced that approximately two-thirds of the mechanical strength of the PDL has been restored.6

The most significant factor that can arrest the revascularization process appears to be colonization of bacteria in the ischemic pulp tissue. The origin of these bacteria can be invasion from dentinal tubules via a crown fracture, or invasion along the blood clot in a severed PDL. Finally, bacteria can be carried to the area via the blood stream (anachoresis). Thus, it has been found that the/>