The purpose of this chapter is to summarize the evidence currently available on the effect of moisture and contaminants on the survivorship of the adhesive-enamel bond, to provide evidence to illustrate the source of variability among contradictory bond strength data obtained from studies with respect to nominally identical materials, and to analyze the polymerization mechanism of various adhesives intended for application to wet enamel. Finally, the effect of water and saliva on the structural integrity of composites is discussed.

Approaches in Assessing the Efficiency of Orthodontic Adhesives Systems

Testing of wet-substrate adhesive effectiveness in orthodontics can be classified into two major categories: bond strength studies and clinical-failure-rate protocols. Table 4.2 summarizes the advantages and disadvantages of each protocol.
Table 4.2.
Classification of research protocols utilized to assess the efficiency of moisture-insensitive adhesives (number in parentheses denote references)

A considerable variability among bond strength studies of same materials is noted probably deriving from the multiplicity of test configurations, as well as the assumptions and approximations integrated in experimental methodologies [7, 8].
It has been found that variability exists among various manufacturers with respect to wing design or dimensions for brackets of a nominally identical prescription [9–10] contributing to the misalignment of loads during testing; thus, the resultant bending moment generated may vary considerably with impact on the stresses developed at the multiple interfaces of the bonding system (enamel-adhesive, adhesive-bracket). This effect can result in substantial differences in the measured force required to cause bond failure [10].
Additional several important factors, which may vary among studies, include the method of load application, e.g., tension, shear/peel or torsion, and the crosshead speed of the testing machine, which is typically set at 1 mm/min but may range from 1 to 10 mm/min. The effect of the latter may be twofold: first various investigations have utilized different loading rates ranging from 1 to 10 mm/min with a notable impact on the comparability of the results. In addition, the reliability in simulating the strength of appliances during mastication and the occasional contact of brackets with opposing teeth may be questioned since the standard rates employed in the literature are irrelevant to the velocity of teeth occluding during chewing. A complete masticatory cycle (sequential opening and closing) of a healthy individual lasts approximately 800 ms with the closing movement having a duration less than 400 ms, considering that the movement on biting is accelerated [11]. This figure may be translated roughly to 2000 mm/min, a value substantially higher compared with the standard 1 mm/min rate employed in conventional bond strength protocols. This value remains unaffected by the hardness of bolus setting the integrity of bond at risk [12], because high loading rates eliminate the viscoelastic response of the polymeric adhesive to the applied load, inducing a stiff body response [13], which decreases bond strength [14].
The results of bond strength testing should be expressed in force units (N) as opposed to pressure units (Pa) since the transformation of force to pressure requires the estimation of the actual surface contact area, which cannot be approximated by the surface area of the rectangular base because of the base mesh design patterns [8]. In addition, dividing the force values by the base surface area to estimate the pressure values, implies that the distribution of the load applied is homogeneous across the entire bracket base, a hypothesis which was proved to be erroneous [10].
Finally, the analysis of data employing either comparison of bond strength mean values or Weibull analysis may yield different results for identical strength values. This is because the latter method takes into account the distribution of values as opposed to comparison of a single value (mean) [8, 9, 15].
The influence of the foregoing parameters on the comparability of the results of bond strength studies has been illustrated by Fox and associates who reviewed 60 publications concerning the bond strength of a very common chemically cured adhesive. It was concluded that variations during various steps of testing precluded a reliable extrapolation of a consensus concerning its performance [8].

In addition to the practical problems and standardization difficulties encountered in bond strength testing, a concern has developed during recent years about the actual clinical relevance of ex vivo bond strength protocols. Some authors have proposed that these studies fail to simulate the multi-factorial intraoral aging of resin composites [16], which include pH fluctuation, complex cyclic loading, microbial attack, and enzymatic degradation (discussed later). All these factors have been known to induce a plasticizing effect on the material, which adversely affects the mechanical properties and resistance to solubility of composite resins. The series of effects accompanying the intraoral aging of the material may not be reflected on the short-term bond strength performance of the adhesive because bond strength as a variable is not a reliable estimate of the polymerization efficiency and associated properties such as solubility, which may impact the longterm survival of the bond [17–18].

How Much Strength is Required Clinically?

An interesting issue which has caused a turmoil in the relevant orthodontic materials literature pertains to the actual clinical requirement of bond strength based on the estimation of the magnitude of forces developed during orthodontic treatment by the activated archwires. Most studies refer to a 1970s paper by Reynolds [19] who proposed a value of 6-8 MPa, based on the loads developed during archwire engagement in the bracket slot. This number has been cited more than 150 times in the literature as the minimum requirement for a clinically derived bond strength threshold value.
However, this proposition is outdated and depends largely on the mechanics and materials and the overall clinical procedures at the time of its introduction, approximately 30 years ago. It is also conjectural since it is based on a vague assumed load application during mechanotherapy and presents an undefined margin of safety. Also, the proposed value does not take into account the stresses developed during mastication and associated loads developed during chewing hard food at high velocities. Moreover, the foregoing discussion on the intraoral aging of adhesive resins has indicated that intraorally, polymeric adhesives are subjected to cyclic fatigue [20], extreme pH and temperature variations, microbial degradation [21], and are exposed to water, saliva, acidic beverages, and alcoholcontaining liquids, which decrease the glass transition temperature of the material, inducing a plasticizing effect [22]; therefore, „threshold strengths“ may not cover the requirements for a sound bond throughout the entire period of treatment, which may exceed 18 months. This fact receives greater interest when the lack of comparison of the magnitude of in vitro and in vivo loads is considered [23].
Lastly, there is a trend in the relevant literature to compare the values derived from bond strength data to the aforementioned conjectural threshold value, especially when the bond strength of the experimental product is lower than its standard bonding counterpart [4, 24, 25]. This notion caries two fundamental flaws: first the efficiency of an experimental product should be tested against the performance of a typical, routinely used application and not to anecdotal evidence, which is based on the proposition of one study in the 1970s. Moreover, the comparison of the values obtained from a testing procedure with that of a given standard requires the statistical analysis in the form of a paired t-test and cannot be performed by arbitrarily weighing the two mean values. In general, bond strength data interpretation should be limited to relative effectiveness of different adhesives, and thus the tactic of extrapolating absolute values and comparing them with a vaguely defined gold standard should be avoided.

Clinical bond failure has become very popular recently because of its profound clinical relevance associated with the fact that the independent variable is the actual survival of bonds; however, this method does not provide an insight into the cause and pattern of failure and reveals no information on the mechanism of polymerization and site of failure. Moreover, this protocol is very demanding from a setup perspective, since it is difficult to apply in an ordinary office setup and usually requires large clinical environments such as those found in educational institutions. In that case, this method presents some complexities arising from the intervention of multiple operators, the requirement for a meticulous design involving selection of participants who seek treatment in an academic institution with respect to their socio-economic status, and the need for special bonding schemes, i.e., split-mouth pattern. These precautions aim at avoiding cross-effects from other confounding variables including those participant-related (habits, masticatory forces which vary with facial type, diet), or operator-induced (mechanics, handling of materials, bonding procedures). Differences in failure rates noted between males and females [26] possibly attributed to the higher masticatory forces of the former, as well as contradictory evidence derived from studies testing identical materials in different countries or populations, imply that culturally influenced dietary habits and sex differences may modulate the failure rate of brackets in vivo.

While some manufacturers claim acceptable performance for their moisture-insensitive or hydrophilic products in a wet environment, others have introduced moisture-active adhesives [26].
The moisture-insensitive adhesive (MIP-3M/Unitek) is available in a primer formulation that replaces the conventional bonding agents. It is applied to the enamel surface and consists of an aqueous solution of methacrylate-functionalized polyalkenoic acid copolymer and hydroxyethyl-methacrylate. This product has been originally used as a hydrophilic primer in dentine bonding systems marketed by the same manufacturer.
Also, a hydrophilic monomer-based light-cured paste formulation has been introduced by the industry as an alternative adhesive, which requires no additional primer or procedure.
Finally, in contrast to the moisture-insensitive primer, water-activated adhesives require the presence of moisture to induce polymerization initiation. The moisture-active adhesive represents a distinct material available as a cyanoacrylate-based paste formulation, applied to intentionally wetted etched enamel without the use of a primer [6].

Structure and Reactivity with Water

Spectroscopic studies [5] showed that the moisture-insensitive primer and adhesive tested demonstrate completely different reactivity with water. In Transbond MIP, water induces partial ionization of carboxyl groups, and an inert dilution effect without activating any setting mechanism. On the contrary, in Smartbond water initiates a setting mechanism via nucleophilic attack to isocyanate groups leading to a polyurethane film formation. This is a key difference in understanding the bonding mechanisms involved and the interfacial performance of these products in bond strength testing.
Figure 4.1 illustrates the FTIR spectrum of Transbond MIP before and after water application. Water exposure induces an increase in the intensity of the hydrogen-bonded O-H vibrations (3500-3250 cm-1 stretching and 1642 cm-1bending); however, the intensity of the hydrogen-bonded unionized carboxyl dimer vibrations (2700-2500 cm-1 stretching) was reduced and the complex ester peak (1720 cm-1) was shifted to lower frequency due to partial ionization of carboxyl groups. No differences were observed in the relative intensity of C = C stretching vibrations (1638 cm-1) of the methacrylate moieties, which are related to free-radical polymerization with the primer state remaining liquid. 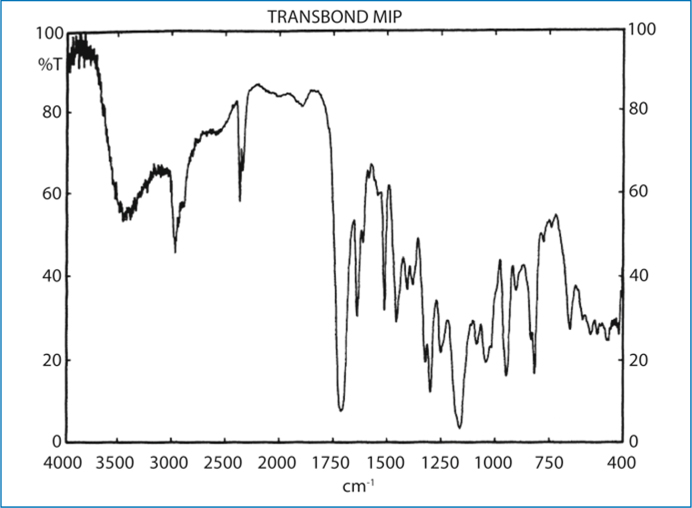 Fig. 4.1.
The FTIR spectra of a moisture-insensitive primer (Transbond MIP), which is based on a methacrylate-functionalized polycarboxylic component, shows a characteristic broad band over the 2750-2500 cm-1 region due to the formation of H-bonded carboxylic dimers
Only gold members can continue reading. Log In or Register to continue