Fig. 2.1.
Occlusal part of labial enamel in primary molar after etching, for 15 s, with 36 % solution of phosphoric acid. A slight porosity is obvious
Several types of acid-resistant prismless enamel, such as easily acid-dissolved and strong acid-resistant types, comprise the primary enamel (Fig. 2.2). Moreover, one dominant primary enamel etching pattern cannot be predicted since core and peripheral types of dissolution are equally probable [32]; therefore, conflict data have been presented concerning the etching pattern yielded on deciduous enamel. Although type-III etching, as described by Silverstone et al. [59],is considered the predominant pattern, types II and I have been frequently observed as well (Fig. 2.3) [33]. The etching pattern depends on the crystalline orientation within the single prism. Type-III pattern has often been predominant in regions where the rods are more disoriented, such as in the primary enamel. The clinical significance of each of the three etching patterns is not known, because the clinician cannot verify the pattern by visual examination and therefore cannot correlate it with the clinical success rate. 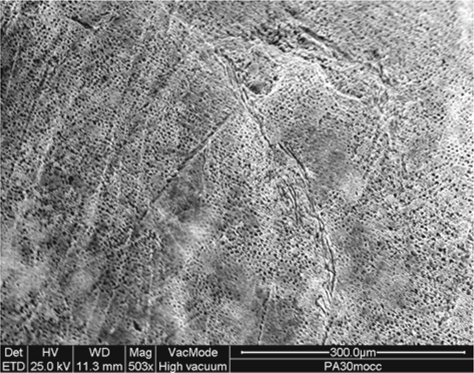 Fig. 2.2.
Occlusal part of labial enamel in primary molar after etching, for 30 s, with 36 % solution of phosphoric acid. Smooth islands (acid resistant) are visible on the porous surface (acid-dissolved) 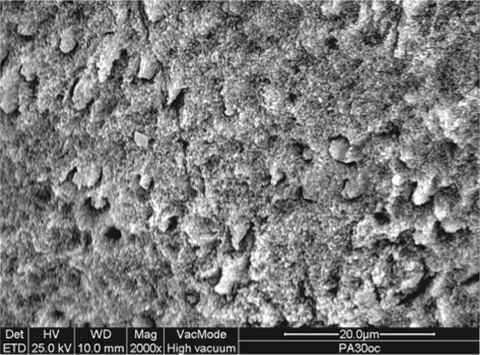 Fig. 2.3.
Occlusal part of labial enamel in primary molar after etching, for 15 s, with a 36 % solution of phosphoric acid. Various etching patterns are noted
Poorly structured etching patterns, rather than peripheral ones, have been identified on unground enamel after 30- and 60-s phosphoric acid etching [26]. Controversial aspects have been drawn regarding the etching generated on ground enamel [18, 34]. The peripheral etching pattern, as a result of loss of intraprismatic structure, is the most common pattern for outer- and inner-ground primary enamel, in various tooth locations. It can be assumed that unground enamel is less resistant to acid effect. Parts of the same tooth seem to influence the etching quality as well (Fig. 2.4). Nevertheless, even in less readily etched enamel, a crystal-level etched pattern can be obtained [35]; therefore, the microfine irregularity resulting from the individual enamel crystals may provide comparable bond strength with the preferential loss of prism periphery substrate [36]. 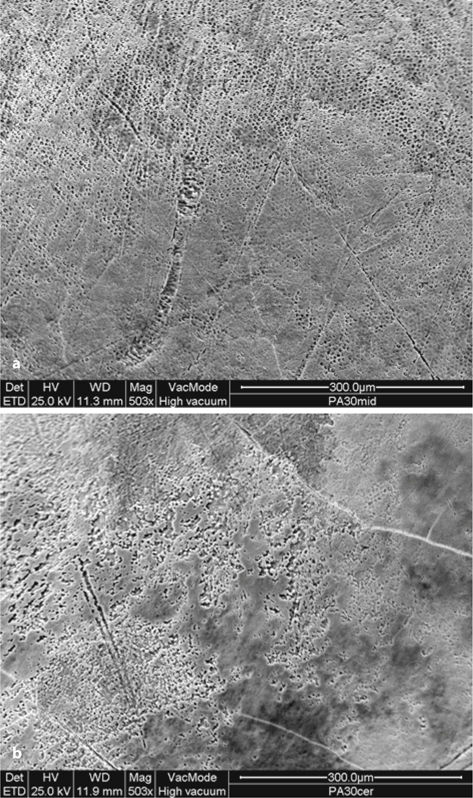 Fig. 2.4.
Middle (a) and cervical (b) parts from a labial enamel in primary molar after etching, for 30 s, with 36 % solution of phosphoric acid. Differences in etching pattern can be easily verified
Besides, the relationship between the type of etching (well-developed, clear prism structure after etching or crystals with mild or slight etching) and the resin adhesion remains unclear [36–39]. Generally, the length of the resin tags has been shown to contribute little to the bond strength [40, 41].
Etching time is considered a major variable for the etching procedure. A wide range – 15 s to 4 min – of optimum etching times for primary enamel has been advocated [42–44]. In the early 1970s, long etching times up to 120s were suggested as an attempt to remove the prismless enamel; however, the longer the etching time, the greater is the possibility for over-etching and for salivary contamination, particularly in young children [16, 43, 45]. In addition, it has been shown that the shorter etching time increases the rate of cases presenting etched enamel prisms [26].
Different application times of 36 % phosphoric acid induce a variety of etching patterns due to potential for heterogeneous dissolution [16]. Type-II pattern was detected after 15-s etching, whereas prism peripheries were demineralized in a homogeneous pattern after 5-s etching [46]. A tendency of type-III pattern to predominate after 15-s etching has been recorded as well [16]. At the same time, random distribution of type-I, type-II and type-III patterns were noticed [16, 47–49]. Negligible morphological changes on the enamel surface were revealed when the etching time was increased to over 30 s [33, 47]. Etching times ranged from 15 to 30 s provided a detailed etch pattern either on ground or on unground primary enamel surfaces [34, 43, 46, 50, 51]; however, more clear and deeper porosity obtained after 30 s than after 15 s etching time (Fig. 2.5),resulting in uniform, well-performed resin projections (Fig. 2.6). Nevertheless, the retentive capacity of deciduous enamel acid conditioned for 15 s or 60 s was similar, whereas 10 s etching time caused lower bond strength [50, 52]. 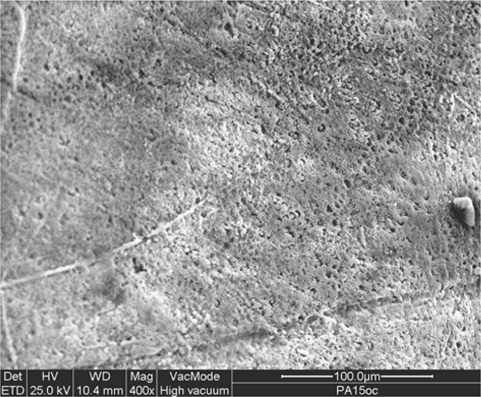 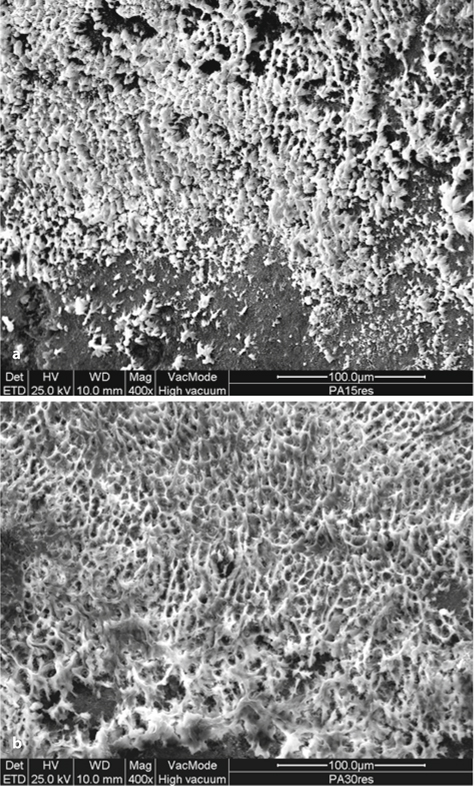 Fig. 2.6.
Resin interface exposed after primary enamel dissolution (HCl 6 N, 2 h) in cases of 15 s (a) and 30 s (b) enamel etching times (36 % solution of phosphoric acid). A well-performed resin network was provided by the longer etching time
A completely dry enamel surface was an absolute requirement for the bonding capacity in previous generations of adhesive agents. The total-etch systems used presently require wet substrates since hydrophilic monomers function as primers and adhesives [53, 54]; therefore, the dry enamel may negatively affect the bonding efficiency.
The application of a bonding agent prior to a sealant placement, as an intermediate layer, may improve the adhesion on a substrate such as the prismless etched enamel, maximizing the surface wetting ability. The use of a bonding agent has also been suggested for a saliva-contaminated etched enamel surface, which is a common phenomenon particularly for deciduous teeth. It is well known that salivary contamination of the etched enamel surfaces results in occlusion of etching micropores (Fig. 2.7) and leads to high microleakage and low bond strength [55–57]. Saliva contamination during etching procedure induces poor sealant retention. Removal of the saliva by water rinsing and re-etching was not proved as efficient (Fig. 2.8), because of the difficulties in protein removal [58–61]. Because the currently used bonding agents are hydrophilic and were developed to bond resins to wet, hard dental tissues, it should be hypothesized that these agents may allow bonding to wet saliva-contaminated enamel surfaces as well. Increased bond strength and decrease in microleakage level were achieved when certain bonding agents from previous generation were used on both saliva-contaminated and noncontaminated surfaces [30, 55, 62]. Since the short- and long-term clinical performance of these cases has not been investigated, this cannot be suggested as a technique to deal with inadequate clinical isolation which, in fact, leads to salivary contamination. 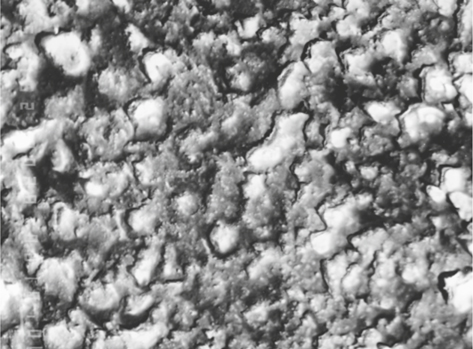 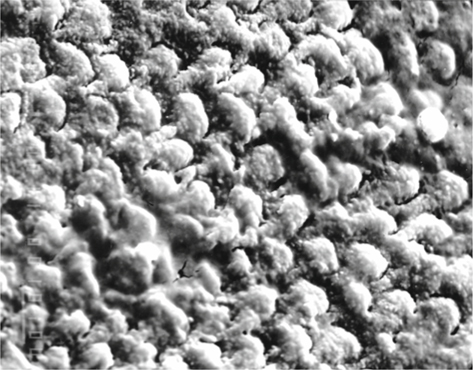 Fig. 2.8.
Re-etching (15 s) of the surface shown in Fig. 2.7 recovered partially the initial etching pattern
Two types of phosphoric acid agents are available. The acid solutions that were first introduced have been almost completely superseded by gel analogues over the past several years. The thixotropic nature of the gels permits increased control over placement and elimination of the acid overflow.
Inferior quality of etching by acid gels compared with solutions was found (Fig. 2.9) in combination with fewer resin tags and less even distribution across the resin interface were created [63]. The viscosity of the gels may inhibit the uniform wetting ability of the agent on the enamel [64, 65]. Nevertheless, the difference in etching pattern between gel and solution acids does not reflect the resinbonding resistance [63]. That finding may highlight the lack of correlation, under in vitro conditions, between etching quality and bond strength which can be due to different substrates used to determine the etching and the bonding efficiency. 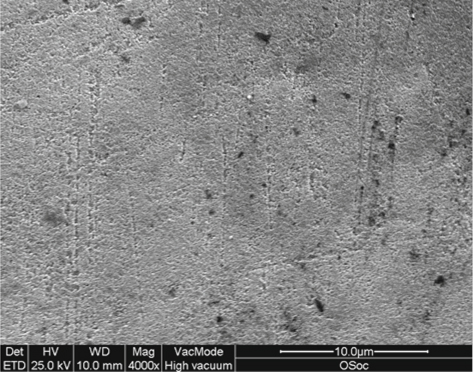 Fig. 2.9.
Occlusal part of labial enamel in primary molar after etching, for 15 s, with 36 % gel of phosphoric acid. A slightly pitted surface is presented
Grinding of the enamel specimens is necessary to achieve the flat surface for bonding, which results in complete prismless enamel removal. This subsurface ground enamel may be more susceptible to acid etching than the superficial prismless enamel.

The self-etching primers were developed to simplify the bonding procedure. These agents are based on the use of non-rinsed acidic polymerizable monomers, which serve as conditioner, primer and resin; thus, the step of enamel phosphoric acid conditioning is skipped. The use of an enamel conditioner that does not require rinsing may be a valuable clinical procedure, since satisfactory isolation may not always be possible in children. Furthermore, the self-etching priming materials can solve the problem of the relatively long time required for the various steps of the complicated adhesive procedure.
Most of the vitro studies have found that the self-etching agents provide lower bond strength to the primary enamel than the conventional enamel conditioning with phosphoric acid [66, 67]. Nevertheless, Agostini et al. [66] have reported that the bond resistance obtained is above the minimal required for permanent teeth (18.6-19.4 MPa) [68]. The short resin tags formed may cause the inferior bond strength measured [67]. It is believed that the bonding on enamel is achieved primarily not by the resinous projections but by micromechanical adhesion provided from monomer diffusion and polymerization into the microirregularities of the etched enamel (Fig. 2.10) and by formation of a hybrid-like layer [40, 41, 69]. It has been also proved, in permanent enamel, that the depth of etching, and subsequently the depth of the resin penetration induced by self-etching adhesives, is not correlated with the bond strengths attained [70, 71]; thus, the surface irregularity of the treated enamel may not be a valid indicator for the bond magnitude achieved. 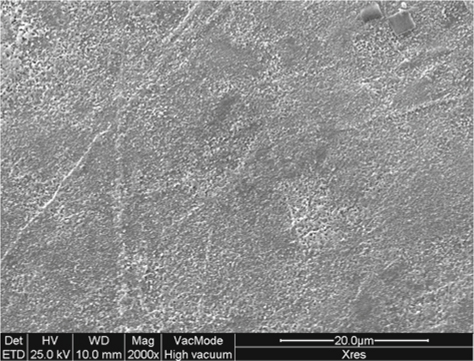 Fig. 2.10.
Resin interface exposed after primary enamel dissolution (HCl 6N, 2h). The enamel was treated with a self-etching primer adhesive (Xeno III, Dentsply/DeTrey). Dense but short resin projections are observed
In fact, a milder etching effect by the self-etching agents (Fig. 2.11
Only gold members can continue reading. Log In or Register to continue