Open tongue base resection for OSA

Surgical treatment of sleep disordered breathing can be difficult for both the patient and the surgeon. The most common surgical treatment for the disorder, uvulopalato-pharyngoplasty, is effective as a stand-alone procedure less than half the time,1 and though the tongue base is recognized as a significant contributing factor in many if not most cases of, obstructive sleep apnea (OSA) it is not often treated sufficiently, for two main reasons: first, most surgeons are not trained to treat this area; second, the results of many of the available procedures for tongue base obstruction are often unpredictable.

It could be argued that if the perfect tongue base operation existed, it would be widely adopted by surgeons. Yet the difficulty in treating the tongue base is exemplified by the multiplicity of available procedures – including genioglossus advancement, hyoid advancement, tongue base suspension, radiofrequency treatment, transoral midline glossectomy, submucosal coblation-assisted tongue base resection, and maxillofacial surgical techniques.

Case reports of tongue base surgery for obstructive sleep apnea date back to the 1980s,2,3 but it was Fujita4 in 1991 who is credited with the first significant work in this arena. He resected the midline of the tongue base transorally with a laser, as discussed elsewhere in this atlas; other variations on this type of procedure have since been published.5–8

However, these transoral procedures have some inherent drawbacks. Chief among them is the lack of visualization of the neurovascular supply to the tongue. Injury to the hypoglossal nerve and/or the lingual vessels can have devastating consequences regarding articulation, swallowing and quality of life. Because of the location of the hypoglossal–lingual neurovascular bundle, these blind transoral resections are limited to the midline third of the tongue, and do not address the lateral tongue base. An open approach through the neck, however, could include direct visualization of these important structures, thereby allowing for resection of the target tissue while preserving the neurovascular supply to the tongue.

This was the rationale that led Chabolle to develop a novel technique for the treatment of sleep apnea-related tongue base obstruction. First published in the English literature in 1999,9 his tongue base resection with hyoepiglottoplasty (TBRHE) employs an open suprahyoid dissection of the tongue base through the midline of the neck with identification of the hypoglossal/lingual neurovascular bundle, coupled with a full thickness resection of 24+6 g of tongue base extending as far laterally as the palatoglossal folds. This wide excision is afforded by the dissection and lateral retraction of the hypoglossal nerve and lingual vessels, with resection of the tongue base tissue deep to and lateral to them. The procedure concludes with hyoid advancement to the lower border of the mandible and shortening of the suprahyoid musculature. Because of the aggressive nature of the procedure, TBRHE also includes a temporary tracheotomy. The procedure can be combined with UPPP for one-stage OSA treatment, which was reiterated by Sorrenti et al.10 in a 2006 article documenting additional experience with this procedure.

This chapter describes the surgical steps involved in this procedure in more detail than previously reported. Chapter •• by Robinson in this atlas details a variation of this procedure that includes a less aggressive resection of the tongue base in an extramucosal plane with avoidance of tracheotomy, in the hope that this is accompanied by faster recovery and less morbidity.

Because this surgery in essence is a transcervical suprahyoid dissection of the tongue base, it is important to review some salient points of the region’s anatomy, particularly as it relates to the neurovascular structures. The first muscles encountered through the incision are the fan-shaped mylohyoid muscles separated by a relatively avascular midline raphe. The digastric muscles are located more laterally in the surgical field, just superficial to the mylohyoids. 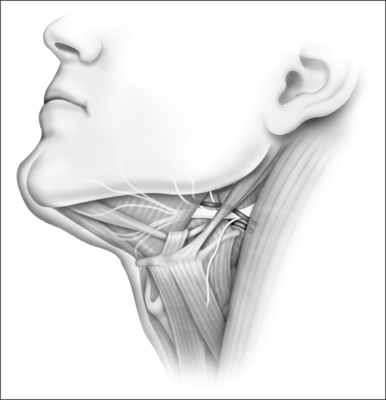 Fig. 45.1 This illustration shows the relevant anatomy of the region, including the relationships of the suprahyoid muscles and the neurovascular supply to the tongue. Note that the hypoglossal nerve and the lingual vein course superficial to the hyoglossus muscle and the lingual artery runs deep to this muscle on its way to the tongue base.

All TBRHE patients should undergo the usual preoperative work-up, as discussed in more detail elsewhere in this atlas. In addition to a polysomnographic evaluation and a complete upper airway/head and neck physical examination, all patients should undergo flexible fiberoptic laryngopharyngoscopy and should have craniofacial skeletal abnormalities ruled out by lateral cephalometric radiography. Those who are skeletally deficient per published cephalometric norms, generally defined as a sella-nasion-subspinale (SNA) angle measuring less than 79° and/or a sella-nasion-supramentale (SNB) angle less than 77°, should probably be considered for a maxillofacial surgical protocol instead.

In addition to these usual cephalometric parameters, Chabolle9 has published other radiographic criteria that he uses to define abnormalities of tongue size and hyoid position, or the ‘hyolingual complex’. This includes measurement of tongue surface area via a T1-weighted mid-sagittal MRI; hyolingual complex abnormalities documented on this MRI include total lingual surface area greater than 28 cm2 and submandibular lingual surface area greater than 4 cm2. The other criterion used by Chabolle is a cephalometric measurement of a quadrilateral space defined as follows: posteriorly by the posterior pharyngeal wall, inferiorly by a perpendicular line extending from the posterior pharyngeal wall to the most anterosuperior point of the hyoid body (H point), anteriorly by a line between H and the posterior nasal spine (PNS), and superiorly by an extension of the line joining the anterior nasal spine to PNS, starting from PNS to the posterior pharyngeal wall. Chabolle contends that a value of more than 25 cm2 within this quadrilateral oropharyngeal space is consistent with hyolingual complex abnormalities.

Sorrenti does not rely on Chabolle’s MRI and cephalometric measurements to define the hyolingual complex abnormalities for his cases. He instead relies on the more typically described cephalometric parameters of SNA, SNB, mandibular plane to hyoid distance (with a value of >25 cm considered abnormal) and posterior airway space (<11 mm abnormal).

Only two published papers were available by the time of this writing for review. The first of these, by Chabolle,9 details results on 10 patients treated from 1994 through 1997. All underwent full thickness TBRHE with a mean resected lingual volume of 24+6 cm2, as measured by the displacement method. All patients underwent concurrent tracheotomy, with decannulation after a mean of 7+2.5 days. Eight of the patients underwent concurrent primary or revision UPPP and three had concurrent septoplasty and turbinectomy. Overall surgical success, as defined by the usual criteria of postoperative Apnea/Hypopnea Index (AHI) <20 and reduction in the preoperative AHI by 50% or more, was 80%. The mean AHI improved from 70 to 27. Other indices, including subjective snoring and daytime somnolence, likewise improved in all but one patient. Lateral cephalometry showed elevation of the hyoid by a mean distance of 11.5+7 mm (2–26 mm), and this hyoid position remained stable at 3 months despite removal of the hyoid suspension sutures in three patients up to 3 months postoperatively. Oral feeding began at 15+4.5 days, and patients remained hospitalized for 19.5+4 days. No clinical abnormalities with lingual mobility, speech, or swallowing were encountered, and there was no postoperative bleeding. There were five neck abscesses in the first six cases, and these were felt to be related to the use of non-absorbable rather than absorbable sutures for the hyoid suspension in those patients.

Sorrenti10 has published data on 10 additional patients treated from 2001 to 2005. All of these patients underwent concurrent UPPP and TBRHE with concurrent tracheotomy, with decannulation after a mean of 7+3 days. The volume of resected tissue was not reported. Success, again defined by the usual Polysomnography (PSG) criteria, was 100%. The mean AHI decreased from 54.7+11.5 to 9.4+5.4 and the mean low saturation improved from 77%+6.2 to 90.7+3. The hyoid position improved by a mean of 12.1 cm, as measured by the cephalometric change in the mandibular plane to hyoid distance, which improved from 30.4+4.1 cm preoperatively to 18.3+2.4 cm afterwards. The mean hospital stay was 16+2 days and oral feeding began at 13+2 days. There were no infections or postoperative bleeds. Barium swallow examinations were done 6–19 months postoperatively, with abnormal results noted in three patients, including premature spillage over the tongue base, vallecular pooling, and incomplete epiglottic excursion, but there was no penetration or aspiration. All patients resumed a normal diet and the patients’ families reported no subjective changes in speech quality.

My data11 are likewise encouraging. At the time of writing, this includes 26 patients treated from 2000 through 2006. Of these, 14 were treated with TBRHE alone for isolated tongue base obstruction (13 had undergone apparently successful UPPP and one had a normal palate on exam); seven patients with both palatal and tongue base obstruction underwent concurrent TBRHE with UPPP. All of these 22 full thickness TBRHE cases included concurrent tracheotomy. An additional five patients have undergone extramucosal tongue base resections without tracheotomy.

Of the 14 patients with presumably normal or successfully treated palates who underwent TBRHE with tracheotomy alone, a mean volume of 26 g (23–30) was resected. Decannulation occurred at a mean of 5+3 days; oral feeding commenced at 6+5 days; and the mean hospital stay was 8+3 days. Success by the usual PSG criteria was 79% (11 of 14), and an additional 14% (two patients) met one of the parameters but not both (one with an AHI drop from 38 to 21.2, the other with AHI improvement from 56 to 27). Complications included persistent but self-limited drainage from the incisions in 10 patients (lasting from 14 to 52 days); extruded hyoepiglottoplasty sutures in two (presenting to 4 years postoperatively); and subjective dysphagia in three (though no patients had aspiration or penetration on modified barium swallows postoperatively). None had objective speech changes as determined by a postoperative speech pathology evaluation, though two reported subjective minor changes.

Of the additional seven of my patients who underwent concurrent UPPP, TBRHE and tracheotomy, success was achieved in six (86%). The mean resected lingual volume in this cohort was 28 g (range 25–33), and all of the patients but one were decannulated within 10 days. Oral feeding commenced within 10 days for all but one (3 weeks), and the mean hospital stay was 9+2 days. Complications included one pharyngocutaneous fistula, which closed without treatment within 2 weeks, two patients with persistent drainage to 3 weeks despite no fistula radiographically, and one patient whose hyoepiglottoplasty sutures later extruded. Persistent mild dysphagia for up to 3 months was noted in four patients.

Since mid-2006 I have performed five extramucosal tongue base resections, but these patients have not been followed long enough at the time of writing for discussion of results. Four were done without tracheotomies, and the fifth patient underwent the procedure to allow for decannulation of a pre-existing tracheotomy. None of the other four patients experienced problems related to the lack of concurrent tracheotomy. The mean resected lingual volume (23.3+1.7 g) was less with this extramucosal resection than that which was excised in the patients who underwent full thickness TBRHE.