Novel Surfaces for Clinical Usage: The Use of Dual Acid Etching, a Historical Review, and Current Applications

Fig. 8.1
CP grade IV titanium OSSEOTITE® in 20,000× magnification
The OSSEOTITE® surface was first commercialized as a hybrid designed implant, with DAE from the implant apex up to approximately the third coronal thread, and had from thereon a turned surface up to the restorative platform (Fig. 8.2). This different surface texture approach was chosen because it was believed it would prevent or decrease the risk for peri-implantitis. Indeed, contemporaneous observations of catastrophic failures of implants with first-generation HA- and TPS-coated surfaces had led to the hypothesis that a rough surface in close contact with the mucosal lining of the peri-implant attachment as found near to the seating platform would contribute to mucosal complications and adverse events. First-generation plasma-sprayed implants were clearly rougher than modern surfaces [26–29]. 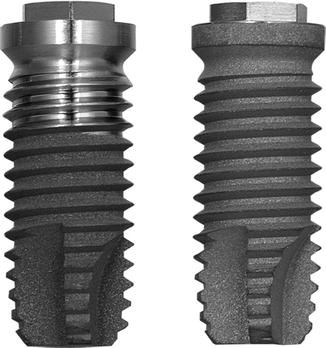 Fig. 8.2
The hybrid and fully OSSEOTITE® implant with dual acid-etched surface
This hypothesis was strongly influenced by clinical model studies indicating that submucosal or supramucosal initial plaque accumulation and composition was different on smooth versus rough healing abutments [30, 31]. Most of these early studies involved low patient numbers and short follow-up time. As such they did not evaluate the possible occurrence of peri-implantitis but only evaluated plaque accumulation and localized mucosal inflammation. Peri-implantitis defined as peri-implant bone loss and pocket formation with inflammation related to bleeding and/or pus evacuation is known to occur first after some time in situ, and hence it was simply not tested in these short-term studies. Later studies revealed that commercially pure titanium, titanium plasma-sprayed, hydroxyapatite-coated, and acid-etched surface textured implants were equally prone to artificially provoked ligature-induced peri-implantitis with comparable microbial composition and no difference in peri-implant bone loss [32].
The DAE implant was compared to the standard BIOMET 3i turned implant regarding peri-implant soft and hard tissue healing in a dog study. Histomorphometry revealed that the peri-implant soft tissues and the marginal level of bone-to-implant contact were similar for both implants but bone-to-implant contact was significantly larger at the DAE surface [33]. In preclinical studies it was concluded that the mean torque value after 8 weeks of healing was four times greater for DAE-surfaced implants than the mean for turned BIOMET 3i implants [34]. Khang and colleagues presented clinical outcomes from a study evaluating both turned and hybrid DAE implants placed in the same patient, with an outcome of 86.7 % for turned BIOMET 3i surfaced implants and 95 % for DAE implants [35]. In soft bone, the survival rate leapt 10 %, going from 88 to 98 % for a turned versus DAE surface [36]. The introduction of DAE OSSEOTITE® surface led to a change in treatment protocol, predominantly with respect to shortening treatment time. The historically recommended 3–6 months between implant placement and functional loading of implants in respectively mandible and maxilla using a two-stage surgical approach was revised based on human histologic and experimental studies, showing increased bone-to-implant contact with the DAE surface compared to the turned ones. A human histologic study [37] evaluated bone-to-implant contact (BIC) for DAE versus BIOMET 3i turned implant surfaces. Miniscrews with a split-surface design were installed in the posterior maxilla of 11 patients allowing bone-implant biopsies. One side of the implant received the BIOMET 3i DAE surface modification and the opposite side maintained a turned surface. Histologic analysis indicated that the mean BIC value for the OSSEOTITE® (DAE) surfaces (72.96 % ± 25.13 %) was statistically significantly higher (P < 0.05) than the mean BIC value for the turned surfaces (33.98 % ± 31.04 %). The results of this study indicated that in the poorer quality bone typically found in the posterior maxilla, the DAE surface increased bone contact compared to opposing machined surfaces on the same implant.
A further step in treatment involved the introduction of early loading. A 1-year multicenter clinical trial by Lazzara and coworkers showed that the DAE implant could be safely loaded after 2 months of placement. This early loading study involved 429 OSSEOTITE® implants placed in 155 patients using a one-stage approach and early loading. The cumulative implant survival rate was 98.5 % at 1 year [38]. In a 4-year multicenter study, the cumulative implant survival rate for DAE implants placed with a two-stage protocol was 98.7 %, with a 99.4 % survival rate in the posterior mandible and 98.4 % survival rate in the posterior maxilla. All implant failures occurred prior to loading and were categorized as early implant failures. When the clinical success of implants 10 mm or shorter was compared to that of implants greater than 10 mm in length, the shorter implants performed similarly to longer implants [39]. Later reports of DAE implants loaded within 2 months after surgery in posterior areas of both mandible and maxilla showed cumulative 3-year implant survival rates of 97.5 and 98.4 %, respectively. This again suggested that microtextured OSSEOTITE® implants in the posterior jaws could safely bear functional load applied 2 months after insertion. When the DAE implants were immediately loaded in mandibles, a cumulative survival rate of 98.9 % was achieved for up to 48 months of follow-up, while the prosthetic cumulative survival rate for the same period was 100 %. Marginal bone loss at the immediately loaded implants was within the generally accepted conventional limits for standard delayed loading protocols [40]. Additional human biopsies revealed that under immediate loading the DAE may yield above 78 % of BIC after 4 months [41]. Browaeys and coworkers evaluated immediately loaded implants in fully edentulous maxillae and mandibles. Information was retrospectively retrieved from 83 patients’ records with 749 OSSEOTITE® implants supporting immediately loaded semipermanent full-arch restorations. Five hundred sixty-eight (75.8 %) implants were placed in healed bone and 181 (24.2 %) in augmented bone. The latter included sinus lifting and/or onlay/inlay grafts with/without biomaterials and membranes. Implant survival and success based on radiological peri-implant bone loss were registered. The implant survival was 96.8 % in the maxilla and 98.8 % in the mandible which is in line with the current evidence that immediate loading has become a predictable treatment procedure provided implant stability is sufficient and cross-arch stabilization of the implants is realized by means of a rigidly connected and screw-retained rehabilitation. Figure 8.3 gives an overview of all the radiographic bone level measurements in relation to function time [42], and Fig. 8.4 shows bone level changes of 100 immediately loaded DAE implants up to 5 years indicative of crestal bone stability after 2 years.

The recognition of the DAE surface’s benefits with respect to clinical outcome compared to the turned BIOMET 3i surface, improved implant survival in compromised bone, and faster and increased osseointegration lead to a challenging interest to further extend the DAE surface further coronally up to the seating platform. The potential benefits of having the DAE surface complexity on the entire implant surface in contact with bone were weighed against the possibility of increasing the incidence of peri-implantitis. A series of animal investigations were initiated in beagle dogs to further elucidate the safety of the roughened surface when in contact with the peri-implant soft tissue lining. Abrahamsson and coworkers [43] performed an experiment to study the composition of the soft tissue barrier that formed to turn or DAE surface healing abutments. At the end of a 6-month period during which proper plaque control had been maintained, biopsies including the implant and the surrounding soft and hard tissues were obtained. The attachment between the peri-implant mucosa and abutment was similar from both a quantitative and a qualitative aspect. The attachment comprised a barrier epithelium and a zone of connective tissue attachment of similar dimension, and hence it was concluded that soft tissue attachment that formed was not influenced by the roughness of the titanium surface. A similar experiment, but with 6 months plaque accumulation, resulted in the establishment of an inflammatory lesion in the connective tissue of the peri-implant mucosa that did not differ between DAE or turned abutments within respect to location, size, and cell composition. Hence it was concluded that the different surface characteristics failed to influence plaque formation and inflammatory response in the peri-implant mucosa [44].
To assess the risk for peri-implantitis, a long-term randomized-controlled multicenter study of hybrid versus full OSSEOTITE® implants was designed. In that study, the control implants had the hybrid design, while the entire surface of the test implants received the DAE treatment. All implants were placed in a one-stage surgical approach, and prosthetic rehabilitation was in function 6 weeks after surgery with insertion of a provisional restoration. Final prostheses were delivered within 6 months and followed for up to 5 years. A declaration of peri-implantitis included scoring all of the following criteria: severe mucositis with positive findings of bleeding and/or suppuration upon probing, a probing depth increase measuring greater than 5 mm, and crestal bone loss that was progressive, i.e., greater than 5 mm and confirmed by radiography. The outcome of the study after 5 years with 139 control and 165 test implants showed one implant being declared as having peri-implantitis (0.7 %) with none of the fully etched implants showing an increased risk. For both groups, there were no increases in probing depths, besides the infected control implant, greater than or equal to 3 mm. Zetterqvist and coworkers demonstrated that the fully etched surface reduced crestal bone loss compared to the hybrid design (0.6 mm versus 1.0 mm, P  < 0.0001) [45]. This result was consistent with the 2009 1-year results of Baldi et al. [46], who found a statistically significant reduction in bone loss for fully etched versus hybrid implants (0.6 mm versus 1.5 mm, P < 0.02). The DAE surface performs well in more challenging treatment protocols. Prospective multicenter studies on immediate loading showed results ranging from 98.5 to 99.4 % survival rate [38, 40, 47–50]. Galli and coworkers reported a randomized-controlled, prospective, multicenter study on a group of 52 OSSEOTITE® implants loaded at 2 months (early) and a group of 52 implants loaded within 48 h [49]. Periapical radiographs were taken at implant placement and 2, 8, and 14 months afterward to determine marginal bone level changes. Soft tissue stability (height of the clinical crown) was measured on plaster casts poured from alginate impressions taken at 8 and 14 months. After 14 months, crestal bone loss for both groups averaged 1.1 mm, and there were no statistically significant changes in soft tissue parameters from the baseline.

With the different surface modifications, the traditional Brånemark protocol slowly evolved. The change from a two-stage to a one-stage surgical approach, accelerated loading protocols, and later immediate loading dramatically reduced the discomfort and inconvenience experienced by patients undergoing implant treatment.
To further enhance early osseointegration, the application of nanometer-scale crystals of calcium phosphate (CaP) onto the DAE surface was investigated in early 2000. Such crystals were deposited with coverage of approximately 50 % of the OSSEOTITE® surface’s peaks and valleys (Fig. 8.5).

Tags: Implant Surfaces and their Biological and Clinical Impact
Sep 15, 2015 | Posted by mrzezo in Implantology | Comments Off on Novel Surfaces for Clinical Usage: The Use of Dual Acid Etching, a Historical Review, and Current Applications
Premium Wordpress Themes by UFO Themes
WordPress theme by UFO themes