Elements of the Cascade

Development from normal salivary gland epithelium to invasive carcinoma is accompanied by a cascade of cumulative genetic alterations (translocations, changes in copy number, mutations) and epigenetic alterations (promoter hypermethylation, histone acetylation) leading to inactivation of tumor-suppressor genes or activation of protooncogenes, or both. Molecular techniques can unravel these genetic and epigenetic events. By exerting selective pressure, the tumor microenvironment also plays an important role during this oncogenetic process. Tremendous efforts have been made over the last 20 years all over the world to find practical ways of assessing these changes in the tumor and its environment and to use the resulting information to try and improve patient care. Investigations have mainly focused on squamous cell carcinoma in the head and neck, but research is now also increasingly being done on salivary gland carcinoma.

The first step toward improving clinical care is to improve prognostic evaluation to allow patients to be selected for more or less aggressive standard therapy, depending on the molecular-biological profile of the tumor. Prognostic issues have been well evaluated and different molecular-biological predictive factors have been described, but subsequent differentiation in the treatment approach has not so far been linked to these findings for patients with salivary gland carcinoma.

There is a need for better individual molecular characterization of salivary gland tumors. Preferably in combination with a prognostic model including clinicopathological factors, this information would allow improved treatment stratification. This has still not yet become a clinical reality.

The second step toward clinical implementation is to try to use the changes identified in the genetic profile as targets for therapy. This aspect is also discussed in Chapter 31, but the present chapter also occasionally mentions areas in which a possible therapeutic impact has been studied, in order to emphasize interrelationships.

A great deal of research has been carried out on identifying and quantifying markers for the end point of the cascade of cumulative genetic and epigenetic alterations leading to deranged growth. Independently of the exact cascade of events or disturbed pathways, these markers reflect the number of cells going through the cell cycle toward division, or the number of cells undergoing apoptosis. These markers thus constitute a cell cycle–based proliferation index. 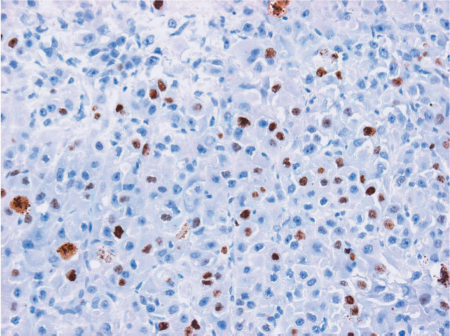 Ki-67 is an antiapoptotic protein expressed in the G1, S, and G2 phases of the cell cycle. Ki-67 staining has been described in different salivary gland tumors.1 In mucoepidermoid carcinoma, Ki-67 was found to be related to the Armed Forces Institute of Pathology (AFIP) grade.2 As expected on this basis, Ki-67 staining later turned out to be a strong independent prognostic factor in multivariate analysis for disease-specific survival in several large studies, including all types of salivary gland cancers,3,4 but also in studies of specific subtypes such as AdCC. In the study of AdCC by Nordgård et al., it proved to be an independent factor in a multivariate model also containing tumor stage and resection margins.5 Skálová et al. described an association with locoregional recurrence and distant metastasis in MEC.6 Figure 46.1 shows the relatively low degree of brown nuclear Ki-67 staining in a low-grade mucoepidermoid carcinoma.

Ki-67 staining has also been found to be a significant prognostic marker in univariate analysis for patients with AcCC,7 but multivariate analyses are still lacking for this tumor type. SDC has also uniformly been found to show a high Ki-67 index.8 Ki-67 staining is thus probably the best-examined and most readily available supplementary examination that a pathologist can use to aid in assessing the biological aggressiveness of a specific salivary gland tumor.

PCNA, an essential cofactor of DNA polymerase delta, present during the S phase, independently predicts survival in patients with MEC.9 PCNA staining also correlates with grading in MEC.2,9 A similar prognostic role for PCNA staining has also been put forward in patients with AdCC; a high PCNA value implies shorter disease-free and overall survival in these patients.10

Human telomerase reverse transcriptase has been found to be expressed in over 90% of all cancers, while it is mostly inactive in somatic cells.11 Reexpression of hTERT results in avoidance of apoptosis. The only very recent application so far in salivary gland molecular tumor biology was a successful transfection, coupling tumor necrosis factor–related apoptosis-inducing ligand (TRAIL) to the hTERT promoter expressed in AdCC, resulting in apoptosis of cells that had previously been immortalized by reexpressing hTERT.12

Apoptosis is an essential feature of normal tissue development and depends on the interaction of proteolytic caspases with antiapoptotic proteins such as survivin, for example.13 Apoptosis is frequently impaired in human cancer, and this explains tumor immortality. In a group of patients with different types of salivary gland carcinoma, Ben-Izhak et al. found that positive staining for TUNEL was a significant prognostic factor for survival, although not in the multivariate analysis.14

The prognostic value of quantifying argyrophilic nucleolar organizer region–associated proteins has been evaluated, and it continued to be an independent prognostic factor in the multivariate analysis in addition to clinical staging for AdCC.15 More recently, a good correlation with optical grading according to the AFIP criteria for MEC was reported.16 The latter finding still requires confirmation, but these data indicate the potential usefulness of this proliferation marker, in addition to those previously mentioned, to help with a more accurate prognostic grouping of salivary gland cancers.

Elements of the Cascade

Many research groups also went on to study the different elements of the cascades of molecular signaling that finally lead to deranged growth. Changes found in these steps have been studied in relation to oncological outcome, most frequently in a univariate way, and every time significance is found, “yet another prognostic indicator” is reported (the “YAPI” phenomenon). These individual elements in the cascade are often targets for treatment, as also described in Chapter 31.

The next part of this chapter describes the scientific findings in different types of salivary gland carcinoma in a structured way. All of these factors impact on or result in one or several of the six essential steps that lead to cancer development, as listed in Table 46.1.

Treatment affecting these receptors may focus on the extracellular part (e.g., monoclonal antibodies against the ligand binding site) or on the intracellular part (small-molecule tyrosine kinase inhibitors).

The cellular homologue of the viral oncoprotein v-Kit is normally not expressed by salivary gland tissue. Several salivary gland tumors express variable levels of c-Kit, which is a transmembrane tyrosine kinase. Expression of c-Kit has been found in 80%–94% of AdCCs17,18 and in 100% of lymphoepithelial-like salivary gland carcinomas and myoepithelial carcinomas, but in none of the other types studied.17 Theoretically, two types of oncogenesis can occur. Firstly, c-Kit can be mutated so that there is ligand-independent activation of its cytoplasmic tyrosine kinase domain, resulting in tumor development. One group recently drew this conclusion and found, in the AdCC patients analyzed, gain-of-function mutations in 88% of analyzable samples.19 In most studies, however, this was not the mechanism of oncogenesis; c-Kit in the tumors studied was not mutated, and thus the second mechanism—overexpression of wild-type c-Kit—is the most likely oncogenetic mechanism in salivary gland cancers.17,20

Expression of c-Kit in AdCCs has been considered to have a prognostic role, but the findings are not consistent. High levels of c-Kit expression (> 50%) were found to be significantly associated with grade 3 or solid-type AdCC by Holst et al.21 However, the opposite finding—high expression only in grade 1 (the cribriform type) and grade 2 (the tubular type) was reported by Freier et al.22 This may not be so surprising, as visual grading of salivary gland tumors is often subjective and poorly reproducible. 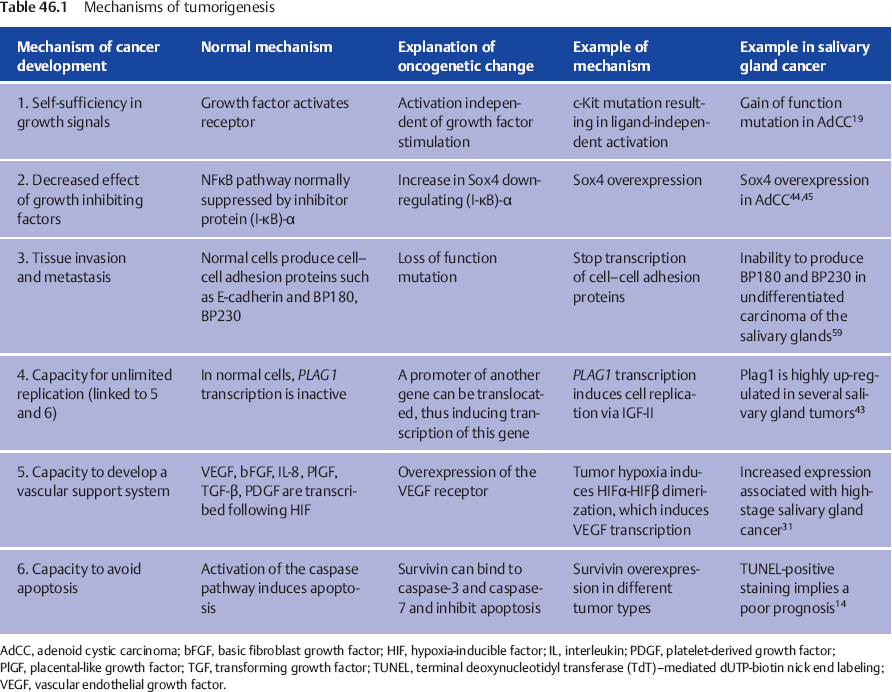 Some authors have proposed that c-Kit expression could be used to differentiate AdCCs from the prognostically more favorable polymorphous low-grade adenocarcinoma (PLGA),23 but later studies refuted this by identifying high c-Kit expression in PLGA samples.24,25

A possible therapeutic role for c-Kit has also been investigated. It is targeted by imatinib in gastrointestinal stromal tumors (GISTs), with quite high response rates, so in view of the high expression rates of c-Kit observed in AdCCs, and on the basis of a favorable report by Alcedo et al. in two patients who showed a response,26 two phase 2 trials were performed using single-agent imatinib mesylate. Unfortunately, no objective responses were observed.27,28 In a response to the study by Hotte et al.,28 Faivre et al. stated that, on the basis of “a phase 2 trial in progress,” that conclusion was too general. When the treatment was administered only to AdCC patients with high c-Kit expression, with documented tumor progression and over a longer period than in the study by Hotte et al. (> 3 months), significant clinical benefit was observed.29 However, I have failed to find a definitive report on this phase 2 trial in the recent literature.