Effective surgical treatment for obstructive sleep apnea/hypopnea syndrome (OSAHS) must be designed to eliminate collapsible soft tissue in the upper airway without interfering with normal function. Creation of a non-collapsible airspace and reduction of airway resistance enables maintenance of adequate airflow with normal inspiratory effort. This translates into elimination or reduction of apneic/hypopneic episodes during sleep, control of symptoms and further minimizes ongoing multi-system damage in OSAHS patients. OSAHS is often caused by multiple levels of obstruction and therefore requires multilevel treatment. In the last decade, several surgical advances have been made in the management of OSAHS.

In this chapter, we review the concept, techniques, evidence-based review of the literature and clinical highlights with respect to multilevel surgery for OSAHS.

This early classification by Fujita and Riley was based on physical examination of the patients with vague guidelines. Specific criteria for identifying unilevel versus multilevel obstruction were not reported. Subsequent development of the Friedman tongue position (FTP) allowed for a simplified method of staging the levels of obstruction.3,4 The early data based on FTP indicated that approximately 25% of patients presenting with OSAHS had unilevel obstruction, while 75% had multilevel obstruction.

1.2 SINGLE LEVEL SURGERY CANNOT BE THE ONLY TREATMENT FOR MOST OSAHS PATIENTS

UPPP was designed to enlarge the oropharyngeal airway8 and remains the most common surgical intervention for OSAHS. Review of the literature indicates the success rate (a 50% reduction in Apnea/Hypopnea Index (AHI) and a postoperative AHI of less than 20) for UPPP as an isolated procedure ranges from 25% to 80%. However, Sher et al.9 reported success rates for UPPP around 41% based on a meta-analysis of unselected cases. Although there are many reasons UPPP may fail, uncorrected retrolingual obstruction has been clearly identified as a major cause. This seems to support the concept that multiple levels of obstruction exist and explains why UPPP alone frequently results in failure.

1.3 MULTILEVEL SURGERY IS NOT LIMITED TO SEVERE DISEASE

Many otolaryngologists presume that although UPPP may not cure the patients with severe OSAHS, it is likely to be effective for patients with mild disease. There are however many studies indicating that the severity of disease is not a predictor of success with single level surgery.3,4,10 Senior et al.11 studied a group of patients with mild OSAHS (AHI less than 15). These patients underwent UPPP and the success rate was only 40%. Friedman further studied a series of patients with mild disease and showed an overall success rate of approximately 40% as well.3,4 If indeed most patients have multilevel disease, the success for the surgical treatment of mild OSAHS is not better than those for treating severe disease. In fact, the basis of the Friedman staging system is that anatomic findings are the most significant factors, rather than severity of disease. Multilevel surgery should not be reserved exclusively for the treatment of severe disease. It is therefore reasonable that multilevel treatment should be considered for most patients with mild disease as well as most patients with severe disease. Since the majority of patients suffering from OSAHS do have multilevel disease and directing the therapy to a single anatomic level has a high potential for failure, the need for multilevel therapy is evident.

Historically, surgical treatment for OSAHS was often based on trial and error. Patients would invariably undergo UPPP as a first stage. If the disease was not eliminated, they would go on to have hypopharyngeal surgery. Planned multilevel surgery at a single phase however has now become standard in many centers.

Published data on multilevel treatment can be divided into four groups.

1. The most commonly performed multilevel approach includes a UPPP as a basic technique with a second procedure designed to improve the hypopharyngeal airway. Most commonly this includes genioglossus advancement, thyrohyoid advancement, radiofrequency tissue volume reduction of the tongue base, and in some cases tongue base suspension.12–15 The success rate for these procedures has been reported to be between 20% and 100% and was based on retrospective studies on small groups of patients. The largest series reported by a single group was by Riley et al.2 who studied 239 patients who underwent what they describe as phase I surgery. In their study, 223 patients (93.3%) underwent multilevel surgery (UPPP + GAHM) in the initial phase. Their success rate based on single stage multilevel treatment for patients with mild, moderate and severe OSAHS was 60%.
2. The second group of patients studied who have undergone multilevel treatment include those who have had more invasive and more radical hypopharyngeal surgery such as open tongue base resection. Because of the aggressive nature of these procedures, most of these patients had a temporary tracheotomy and required significant hospitalization. There was significant postoperative morbidity as well. The success rate in this group varied between 44% and 100%.2,15–18
3. The third group of multilevel surgery for OSAHS included those patients undergoing bimaxillary advancement as part of the multilevel treatment program. Most of these patients had undergone a staged surgery often, with UPPP and genioglossus advancement as their primary procedure. This group was not included in the overall discussion and recommendation for treatment in this chapter.
4. ‘Multilevel minimally invasive treatment for mild/moderate OSAHS’ will be discussed in the next section. This section also lists minimally invasive as well as invasive procedures to address obstruction at the level of the nose, oropharynx and hypopharynx.

The ideal procedure for OSAHS patients would have low morbidity, allow reasonable success, have low risk of alteration of the original upper aerodigestive tract function, and could be performed in a single stage. In our experience, patients with severe disease and obvious daytime sleepiness often have strong motivation for multilevel surgery with invasive procedures to address the obstructed sites. However, patients with mild or moderate obstructive sleep apnea are less likely to be willing to undergo aggressive surgical procedures.

In 2004, Stuck et al.21 published their surgical results with radiofrequency on the palate and base of the tongue for 18 OSAHS patients with mild/moderate disease. They reported their success rate as 33.3% (by their definition of success, a postoperative AHI reduction of at least 50% and below a value of 15).

In 2007, we presented our experience on minimally invasive single-stage multilevel surgery (MISSMLS) for patients with mild/moderate OSAHS.22 Our patients underwent three-level treatment that included nasal surgery, palatal stiffening by pillar implant technique and radiofrequency volume reduction of the tongue base with a minimum follow-up of 6 months. The results in a retrospective review of a prospective dataset showed that both subjective and objective outcomes improved significantly, and treatment morbidity was minimal and only temporary. Mean bedpartner’s snoring visual analog scale (VAS) decreased from 9.4±0.9 preoperatively to 3.2±2.4 postoperatively. Epworth Sleepiness Scale (ESS) decreased from 9.7±3.9 preoperatively to 6.9±3.3 postoperatively. Mean AHI was reduced from 23.2±7.6 to 14.5±10.2. Classic success was achieved in 54 of 122 patients (47.5%).

The success rate of any protocol has to be weighed against associated morbidity and risks. The relatively low morbidity combined with reasonable success makes multilevel minimally invasive surgery for OSAHS worthwhile. It should be offered to patients when multilevel obstruction is identified in the context of mild/moderate disease and other non-surgical options have been excluded.

4 SYSTEMATIC REVIEW OF LITERATURE ON MULTILEVEL TREATMENT FOR OSAHS PATIENTS

We recently reported on a systematic review of all English language literature on multilevel surgery for OSAHS patients as of 31 March 2007.23 Article titles and abstracts were reviewed to determine article eligibility. We also identified relevant publications from the lists of references in this subset of articles. The study design and its corresponding level of evidence were clarified as follows: (1) Level 1 – randomized controlled trials or a systematic review; (2) Level 2 – prospective cohort study; (3) Level 3 – case–control study; (4) Level 4 – case series; and (5) Level 5 – expert opinion.

There were 49 papers (58 groups) selected for final inclusion after detailed review (Table 17.1). There were 1978 subjects included in the study with a pooled mean age of 46.2 years. The mean minimal time period from multilevel surgery to postoperative PSG was 7.3 months (range, 1–100 months). 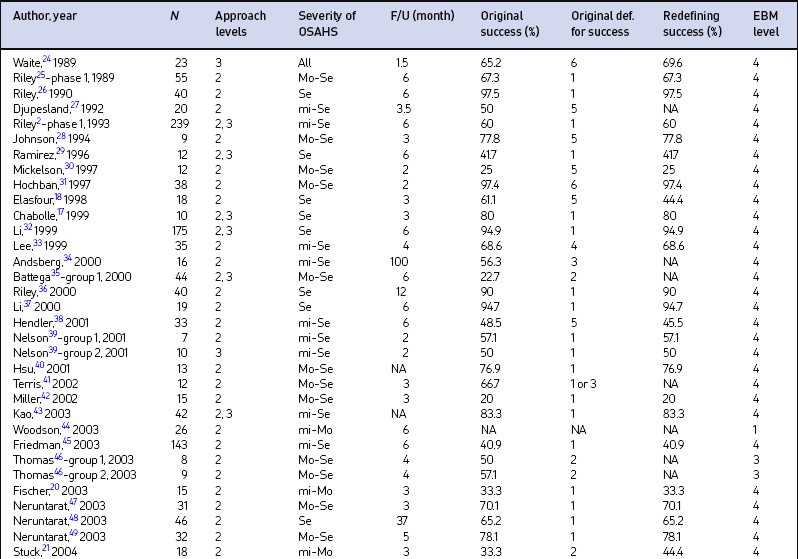 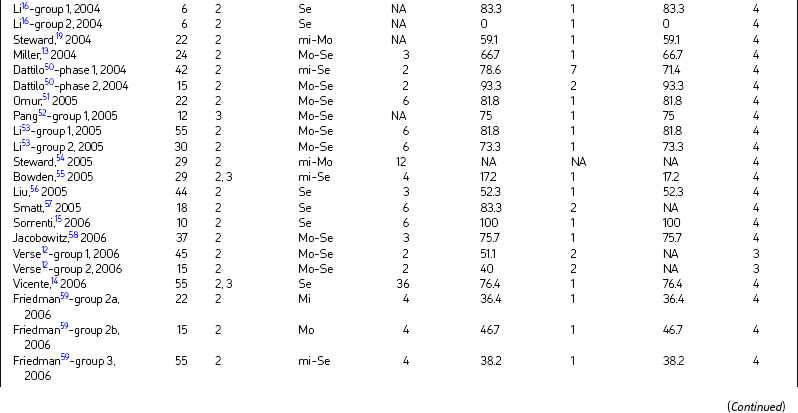