Obstructive sleep apnea (OSA) is the commonest sleep disorder. It is characterized by repetitive apneas and hypopneas during sleep. These events are due to partial or complete collapse of the upper airway, resulting in decreased oxygenation and sympathetic overdrive. Frequent arousals occur, causing sleep fragmentation leading to excessive daytime sleepiness, morning headaches, poor concentration, memory loss, frustration, depression and even marital discord. The mechanism of upper airway collapse in OSA is usually multifactorial. Many authors concur that most patients with moderate and severe OSA are very likely to have multilevel obstruction involving the level of the palate and the base of tongue. Endoscopic examination with Mueller’s maneuver can grade airway collapse at three levels, namely the velopharynx, lateral pharyngeal wall and the base of tongue.1 There are surgical procedures that can address the various levels of collapse in these patients. Recently, lateral pharyngeal wall collapse has also been dealt with by creating tension in the lateral walls by lateral pharyngoplasty2 or expansion sphincter pharyngoplasty.3 Palatal collapse can be treated by traditional uvulopalatopharyngoplasty, Z-plasty or transpalatal advancement; tongue base can be reduced by a glossectomy or a suspension sling suture.

The site of obstruction is unimportant when the modality of therapy is a tracheostomy or nasal continuous positive airway pressure, which indiscriminately overcomes all collapsible airway segments, much like a ‘pneumatic splint’. When upper airway surgery is contemplated, it is critical to tailor the approach according to the site of obstruction noted preoperatively on Mueller’s maneuver. The type of surgery employed would depend on the type of palatal and tongue base collapse.

Although a staged approach to the upper airway reconstruction is acceptable, and even endorsed by the American Sleep Disorders Association,4 when the likelihood of multilevel obstruction is high, the chances of surgical success may be nearly doubled by addressing multiple anatomic sites at a single surgical sitting,5,6 thereby avoiding additional general anesthetic. The initial staged approach was described by Fujita, when he introduced uvulopalatopharyngoplasty for OSA7; he recognized that the upper airway may collapse at multiple levels. Hence, he described the laser midline glossectomy for patients who failed UPPP and who were diagnosed to have retrolingual obstruction.8 It was Riley et al.6 who first advocated simultaneous multilevel pharyngeal surgery for patients with multilevel obstruction noted clinically on Mueller’s maneuver. They showed promising success with minimal complications. Many authors have reported minimal complications with one-stage multilevel pharyngeal surgery for patients with OSA.9–11

The key to surgical success is patient selection. Patients with OSA must be treated in a holistic manner, as manyof these patients are overweight or obese, and have associated co-morbidities like hypertension, ischemic heart disease or cerebrovascular disease. The overweight patient should be put on a strict weight loss and dietary regime, while being on nasal continuous positive airway pressure, until ideal body weight is attained. Bariatric surgeryshould also be considered part of the surgical armamentarium in the management of these obese patients. Nasal continuous positive airway pressure (CPAP) has always taken the lead in the treatment of OSA. It is undoubted that nasal CPAP is effective in most OSA patients, ifused properly. However, it is also universally known that patient compliance is a major problem in the use ofnasal CPAP.

Surgical techniques for the treatment of OSA have long been criticized and frowned upon, especially uvulopalato-pharyngoplasty (UPPP). Uvulopalatopharyngoplasty remains the most common surgical procedure performed for sleep disordered breathing (SDB). Traditionally, UPPP was used mainly for patients with collapse/obstruction of the soft palate during Mueller’s maneuver (MM). Mueller’s maneuver was first described by Borowiecki and Sassin for the preoperative assessment of OSA.12 According to Fujita’s three types of collapse of the upper airway during sleep,13 Mueller’s maneuver was able to identify Fujita type I (soft palatal) collapse, and hence, isolate patients suitable for UPPP. This, unfortunately, was not always the case,as there are multiple factors involved in the dynamics of OSA, and many patients have multilevel obstructions.Due to the varied clinical indications for this procedure, many authors have found unfavorable postoperative results. Sher et al. reviewed a meta-analysis of reported UPPPprocedures and found an overall success rate of only 40%.14 In an attempt to improve surgical success rates, Friedmanet al. devised a clinical staging system for SDB in orderto better select patients for the UPPP.15 They describedthree stages based on Friedman tongue position, tonsil size and BMI.

Friedman reported an overall success rate of 80.6% for stage I, 37.9% for stage II and 8.1% for stage III. It is well accepted that patients with Friedman tongue position 3 and 4 are indicative of a large tongue, suggesting that if surgery is contemplated, some form of tongue base surgery would be appropriate as well. Most authors concur that patients who are noted to have multilevel collapse with Mueller’s maneuver on endoscopy (of both the palate and tongue base) should have both levels addressed at the samesurgical sitting. Friedman et al. showed that selected patients with stage II and stage III disease treated with UPPP and tongue base reduction using a radiofrequency technique (TBRF) had remarkably improved results.16 Follow-up at 6 months showed successful treatment of patients with stage II disease with success rate improving from 37.9% to 74.0%, and stage III disease improving from 8.1% to 43.3%.16

Severity of OSA has also been noted to correlate with clinical examination, namely Mueller’s maneuver.17 It was demonstrated in 102 patients that OSA severity strongly correlated with Mallampati grade (r=0.389, P<0.0001), Friedman clinical staging (r=0.331, P=0.0007) and Mueller’s grades of collapsibility, at all three levels. Of significance, only 6.9% of patients with mild OSA had a >50% collapse of the base of tongue region, as compared to 65.9% of patients with severe OSA.17 This illustrates that patients with severe OSA are 10 times more likely to have tongue base collapse than patients with mild OSA. Hence, patients with severe OSA and with tongue base collapse noted on Mueller’s maneuver, falling into Friedman stage II or III, should have multilevel surgery in order to achieve the best possible results. In the uncommon event that a single, severely obstructed site in the upper airway is identified, a staged approach may be considered even if the OSA is severe.

Nasal surgery is offered when the patient has significant nasal obstruction that has failed medical therapy (topical nasal steroids), especially when the patient would want correction of the nasal obstruction independent of its effecton their sleep. However, it is reported that nasal surgery alone has only a 15.8% success rate as a treatment of OSA.18 The debate would be the safety of multilevelsurgery, addressing all three levels: the nose, palate and tongue base at the same surgical sitting. Most authors concur that there is no evidence of increased complication rate or morbidity with these procedures performed together.11,19–21

Riley et al.22 first reported a skeletal approach to hypopharyngeal obstruction by using an adaptation of the laryngeal suspension procedure originally developed to minimize aspiration in patients who had had a supraglottic laryngectomy. In their original description, the infrahyoid musculature was removed from the hyoid bone, which was then suspended from the anterior mandibular arch using fascia lata. The technique was later simplified23 by approximating the hyoid bone antero-inferiorly to the thyroid cartilage (Figs 44.1 to 44.5). Essentially, the hyoid is releasedfrom its inferior attachments and advanced anteriorly and inferiorly over the thyroid cartilage. This applies tensionto the hyoepiglottic ligament, enlarging the hypopharynx (see figures). 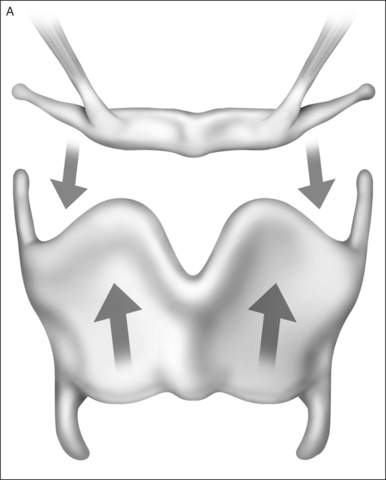 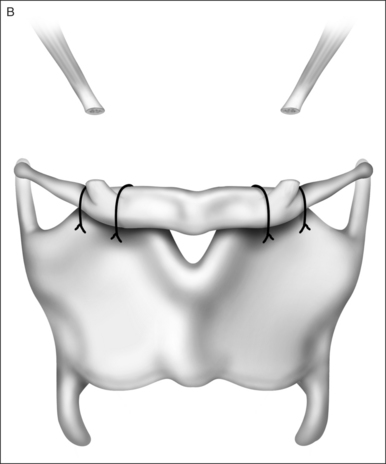 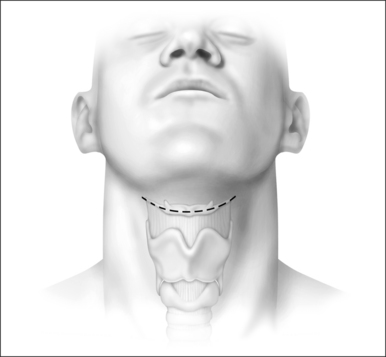 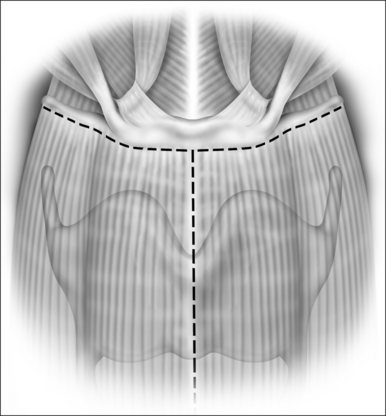 Fig. 44.3 (Hyoid 1 A). The hyoid bone is approximated down to the thyroid cartilage. 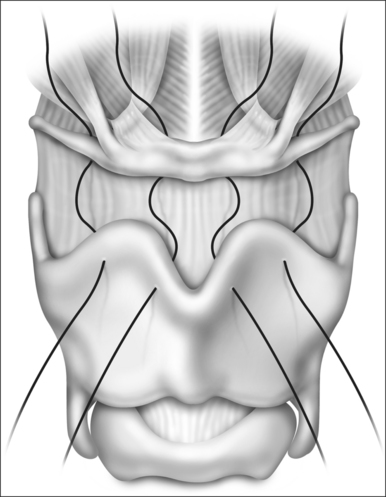 Fig. 44.4 (Hyoid 4). Four non-absorbable sutures are used to appose the hyoid bone down to the thyroid cartilage. 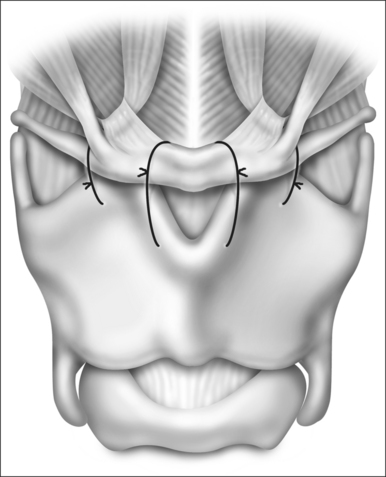 • The hyoid bone is exposed as in a thyroglossal cyst excision (Sistrunk procedure).