The major contributing factors to retrolingual collapse in sleep apnea are macroglossia, hypotonia, retrognathia and lingual tonsillar hyperplasia. Any or all of these may contribute to varying degrees in any given individual. All current low morbidity options have limitations in treating the macroglossia component. The ideal procedure for macroglossia would be low morbidity, allow large tissue volume reduction, have low risk of alteration in tongue function and be single stage. Submucosal glossectomy techniques aim to fulfill these criteria, with preservation of mucosa causing minor pain postoperatively.

Patients with macroglossia are candidates for submucosal glossectomy techniques (with appropriate palatal surgery for any co-existing retropalatal collapse). The larger the tongue, the more tissue is potentially resectable in the medial tongue between the neurovascular bundles, with or without extension of excision to the lateral tongue super-ficial to the neurovascular bundles and deep to mucosa. The converse is true: if the tongue is not enlarged, little excess muscle tissue will be able to be safely removed within the anatomical constraints of the neurovascular bundles, with only a small improvement in retrolingual airspace. Acromegaly may cause macroglossia, therefore patients with normal or near normal body weight and a large tongue should be screened with a growth hormone assay, particularly if they have coarse facial features. Patients with a Body Mass Index (BMI) >40 are more appropriately treated with bariatric surgery rather than airway reconstructive surgery, although morbidly obese patients may be offered airway reconstructive surgery if bariatric surgery fails or is refused.

Clinical indicators of macroglossia are most commonly used, but are subjective. Flexible nasendoscopic observation (supine, standardized for phase of respiration) is commonly used to examine the retrolingual airway.1 Variation in muscle tone changes airway size during quiet breathing.If the retrolingual airspace is reduced in mid-respiration (and particularly if reduced on end inspiration when muscle tone is greatest), and there is no co-existing retrognathia (defined as sella-nasion-supramentale (SNB) <76° on cephalostat) or lingual tonsillar hyperplasia, it can be assumed that macroglossia exists.

Tongue size, as visualized orally, has been shown (when considered with tonsillar size) to predict uvulopalatopharyngoplasty outcomes.2 Friedman tongue positions 3 and 4 are potential candidates for submucosal glossectomy techniques. Untreated tongue bulk of the middle third of the tongue (measured antero-posteriorly) may precipitate or exacerbate retropalatal collapse by prolapse onto the oral side of the palate during sleep, which is not readily perceived by nasendoscopic examination (awake or sedated). In addition, a bulky dorsal tongue will reduce the oropalatal airway, which may be symptomatic, particularly if palatal surgery has advanced the free edge of the soft palate anteriorly to treat retropalatal obstruction (with or without scarring of the free palatal edge). Symptoms of a reduced oropalatal airway typically include globus pharyngeus (which can be localized to the free edge of soft palate on examination), reduced exercise tolerance (less oral airway), and sometimes frequent gagging. These symptoms can be expected to resolve with adequate separation of the tongue dorsum and the free edge of soft palate as a result of successful tongue reduction surgery.

Radiological parameters offer more objective measures of tongue size. Chabolle et al. have published anatomical data (in French) from a midsagittal MRI, demonstrating a lingual area of 25.8 ± 4.6 cm2 in sleep apneic patients, compared to 20.2 ± 3.2 cm2 in normal patients (P<0.001).3I use a midsagittal reconstruction from a spiral multislice CT scan to define the same area and thus quantify tongue size. Chabolle suggested tongue reduction surgery if the lingual area was greater than 26 cm,2,3 which was later revised to >28 cm2 in relation to open tongue base reduction with hyoepiglottoplasty.4 I consider submucosal glossectomy techniques in patients with a lingual area greater than 26 cm2, but the ideal parameters to define which patients with retrolingual collapse need bulk reduction, which need tensioning of the tongue and which need both strategies are, at present, unknown.

The external submucosal glossectomy procedure follows Chabolle’s principles,4 but mucosal preservation significantly reduces pain, delay of oral intake and hospital stay. Hyoid advancement toward the mandible with mylohyoid shortening is incorporated, but epiglottic suture verticalization is omitted, as adequate verticalization is planned to be achieved from hyoepiglottic ligament pull alone.

General anesthesia is induced, and the airway secured with nasotracheal intubation. An arterial line is routinely used to measure intraoperative and postoperative blood pressure. Broad-spectrum antibiotics and 8 mg dexametasone are administered IV. The neck is extended with arolled sheet beneath the shoulders. Skin crease incisions over the hyoid and in the submental crease are marked (Fig. 47.1). The incisions are injected with 1% lidocaine+1:100,000 adrenaline, with a 10-minute delay for vasoconstriction to take effect, during which time routine preparation of a sterile field is performed. The incision over the hyoid is extended from the medial edge of one sternomastoid muscle to the other, and a subplatysmal planeis developed to expose the suprahyoid and strap muscles (Fig. 47.2). 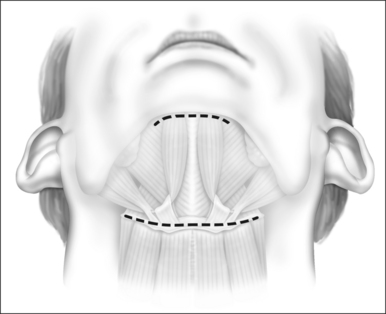 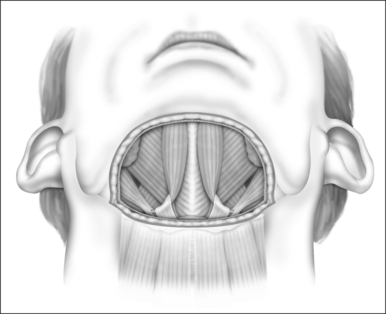 Bovie dissection onto the hyoid bone is performed, with a small pocket created above and below the hyoid in the midline so the bone can be gently grasped with an Allis clamp. Leaving a cuff of a few millimeters of muscle on the superior surface of the hyoid, an incision is made transversely from the midline to the level of the lesser cornu. Intermittent gentle anterior traction on the hyoid helps to define the stylohyoid muscle inserting into lesser cornu, which should not be cut.

The cut edge of mylohyoid is shortened by 8–10 mm and retracted anteriorly. The anterior belly of digastric and stylohyoid are retracted laterally with Lagenbeck retractors (Fig. 47.3). This exposes the key anatomical landmark to the dissection, which is the hyoglossus muscle. The surgeon will see first the rounded anterolateral edge of hyoglossus, as the muscle is approached obliquely from the anterior direction. Running superficial to hyoglossus is the hypoglossal nerve, with accompanying lingual vein. These structures are gently mobilized with a curved clamp (e.g. a Gemini), and a colored loop of vascular tape is placed around the nerve and vein together, and clipped. Any bleeding is controlled with careful bipolar diathermy. Magnification of the operative field with loupes is helpful, but is not essential. Lagenbeck retractors are now used to retract the hyoglossus laterally, and geniohyoid medially to expose the lingual artery lying deep to hyoglossus (Fig. 47.4). If difficulty is encountered in finding the artery, digital palpation in this area for pulsations can be helpful, as can use of a Doppler or ultrasound machine. Another loop of vascular tape is placed around the artery. 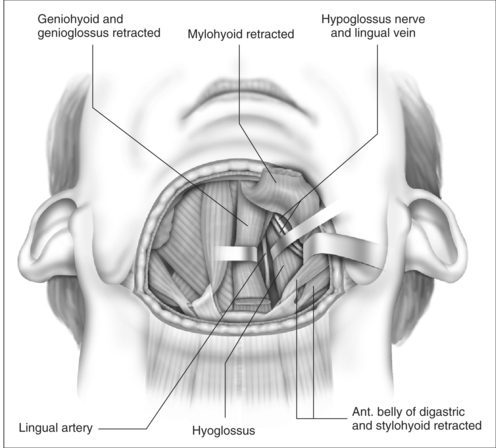 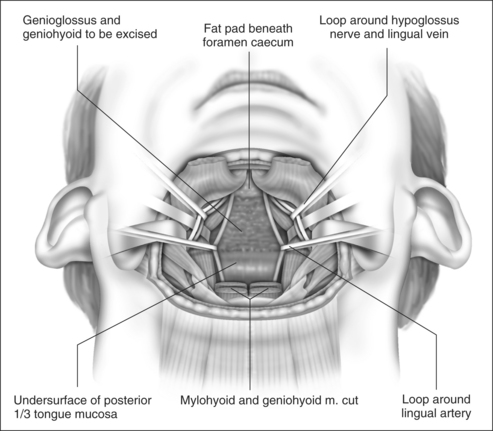 With the neurovascular structures identified and gently retracted laterally, geniohyoid, genioglossus and intrinsic tongue muscles are sectioned until the undersurface of tongue mucosa is reached, beveling approximately 30° superior to the axial plane from hyoid, to avoid dissection of the pre-epiglottic space and hyoepiglottic ligament (Figs 47.4 and 47.5). The extent of dissection is tailored to the patient’s anatomy, but at a minimum includes muscle between the neurovascular bundles from above hyoid to the level of foramen cecum superiorly. The foramen cecum is identified by palpation from the undersurface of mucosa and a ‘sentinel’ fat pad beneath it. Lateral extension of the dissection between the neurovascular bundles and mucosa is frequently desirable, particularly in patients with a bulky lateral tongue base. Extension of the dissection anterior to the foramen cecum is also frequently desirable (into the middle third of the tongue antero-posteriorly), which is the area of bulk assessed by oral examination (Friedman tongue size).2 Enough genioglossus must be left anteriorly for normal tongue function, which is most easily decided by palpation, and is roughly defined by a coronal plane through the foramen cecum. A surgeon starting this technique should err on the side of caution, and it is usual for the extent of muscle excision to increase with increased experience. Therefore, if viewed in a sagittal plane, the cavity dissected is submucosal and crescenteric (Fig. 47.5). 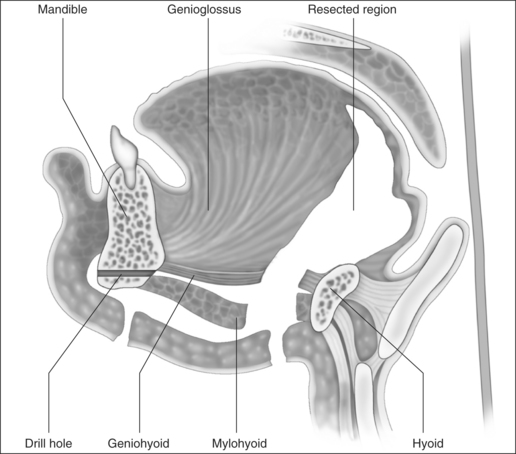