Fig. 5.1
Palatal cortical bone density in adults and adolescents according to palatal area (From Han et al. [21])
In addition, Bernhart et al. [23] reported that the most suitable area in adults for implant placement in the palate was located 6–9 mm posterior to the incisive foramen and 3–6 mm paramedian to the suture. However, other study indicated that the area of high density in the cortical bone extended 15 mm posterior to the incisive foramen at the medial half of the measured area and 6 mm in the lateral half [21].
These studies supported Wehrbein’s [24] conclusion that the density of the median palate was high enough to support mini-implants. He also suggested that the reported 10 % failed micro-implants inserted in the palatal area [25, 26] may be attributed to factors other than bone density.

Fig. 5.2
Reference lines for evaluation of palatal bone thickness according to palatal area (From Ryu et al. [32])
The palatal bone might be significantly thin in the midsagittal area due to incomplete ossification of the midpalatal suture. Therefore, placement of TSADs in the paramedian palatal area has been recommended because of its thin keratinized soft tissue and sufficient cortical bone [28, 31, 33–39].
The bone thickness decreased laterally and posteriorly in the paramedian area in adults [28, 32]. For adolescents, the anterior medial and lateral areas had the thickest palatal bone [32]. King et al. [29] demonstrated a sufficient vertical bone depth at 4 mm distal and 3 mm lateral to the incisive foramen to install a 3-mm-long implant in adolescents. In contrast, Gracco et al. [31] found no significant differences in the palatal bone thickness between adults and adolescents. However, their youngest group was over 10 years old, while Ryu et al. [32] focused on the adolescents and subdivided them into early mixed dentition (EMD) (mean age: 8.0 years) and late mixed dentition (LMD) groups (mean age: 11.5 years). The EMD group had significantly lower bone thickness than the two other groups, mainly in the anterior area. This inconsistency may be due to differences in methodology. Nevertheless, the bone thickness was greater in the anterior paramedian area than in the posterior one in all three groups of their study. This might be due to the difference in amounts of remodeling growth between the posterior and anterior parts [40].

The clinical applications and installation of the MPAP have been described in detail in several case reports [12, 13]. The MPAP should be adjusted on the dental cast to fit the shape of the patient’s palate. To achieve the best positioning of the MPAP, its arms should extend in the area between the first molar and second premolar or second deciduous molar. Enough space should be left between the arms and the palatal slopes.
Then, a silicon jig extending on the occlusal surfaces of the first molar and second premolar is fabricated to hold the plate firmly during placement and to keep even space between the arms and palatal soft tissue bilaterally.
At the placement appointment, local anesthesia is administrated; the jig-MPAP assembly should be placed by fitting the jig to the occlusal surfaces of the molars and premolars. And then, self-drilling mini-implants should be inserted through the screw tubes with an implant engine (30 RPM and less than 30 Ncm). After placement of three mini-implants, the jig is removed using a utility plier. Tightening of the mini-implant may be required after removal of the jig, as well as fine adjustment of the position of the arms. Then, a palatal bar with hooks is bonded to the first molars (Fig. 5.3). Immediately after placement, distalization can be initiated with elastics or NiTi closed coil springs.

Fig. 5.3
(a) The Jig-MPAP assembly is placed in the patient’s mouth; (b) the assistant is holding the jig while the operator is inserting the miniscrews; (c) removal of the jig using a utility plier; (d) a palatal bar is bonded to the first molars to start distalization (From Kook et al. [13])

Recently, the speech perturbation and adaptation related to MPAP appliance over time has been evaluated [61]. A speech recording session of the alveolar, alveopalatal, and palatal sounds [t], [d], [s], [z], [n], [r], and [j] was made five times throughout treatment: T0, prior to PP placement; T1, just after the PP placement; T2, T3, T4, and T5, 1, 2, 3, and 4 weeks after MPAP placement, respectively. Acoustic analysis was performed using the Praat software (Paul Boersma and David Weenink, University of Amsterdam, Amsterdam, the Netherlands) to assess the pitch and the voice onset time (VOT) for each sound.
There were no significant changes in the pitch except for [r]; however, it changed back to normal after 1 week (Fig. 5.4). The sounds [t], [n], and [j] showed an increase in the VOT after MPAP placement followed by a decrease 1 week later. The VOT of [s] and [r] also increased after MPAP placement but decreased back to normal after 2 weeks (Fig. 5.5). 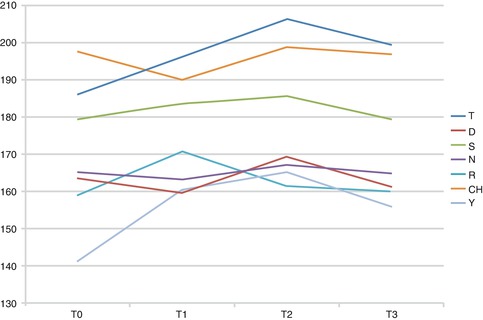 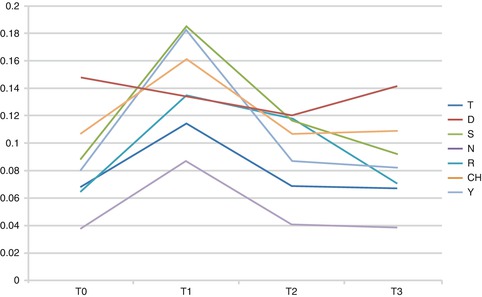 Fig. 5.5
VOT of different sounds over time
It was concluded that MPAP might cause speech alteration in some patients. However, adaptation to the placement of MPAP appliance occurs within 1–2 weeks. Therefore, the clinician should advice patient and/or parents regarding the possible temporary effect of the MPAP appliance on speech prior to its placement. 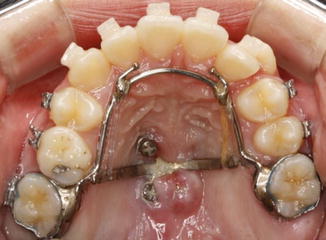 Fig. 5.6
Palatal soft tissue inflammation after placement of the early designs of the MPAP (From Kook et al. [13])

5.4 The Design Improvements of the MPAP

The design of the palatal plate has been modified several times to cope with the needs of the patient and the operator for easier and more accurate placement and less irritation to the tissues.

Tubes have been added to the screw holes to prevent or decrease soft tissue inflammation and overgrowth that might result from tissue impingement under the prototype of the MPAP. These tubes encountered the micro-movements of the plate under the distalization forces especially the torquing element. In addition, it might provide a plate-bone contact, which leads to reduction of the possibility of inducing inflammation on the soft tissue around the MPAP (Fig. 5.7).

Fig. 5.7
Design improvement of the MPAP. (a) Prototype; (b) half tube extensions on the screw holes; (c) final design: screw tubes, angulated arms, and modified notches (From Kook et al. [13])

In some of the cases treated by the early design of the MPAP, the palatal bar becomes too close to the arms of the MPAP, and consequently, the distalization forces were decreased due to a very small range of action. This was corrected by manufacturing of a new palatal bar and in fewer cases by replacing the MPAP more posteriorly. However, this was perceived as undue waste of time and cost. Therefore, instead of having straight arms as in the prototype of the MPAP, the final design has been modified to have posteriorly angulated arms to increase the range of action (Fig. 5.7).