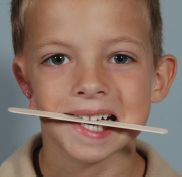 Figure 14.2.  Approximately 50% of patients with microtia have some mandible deformity. This patient has conchal-type microtia and a significant cant to his occlusal plane.

There is wide variation in the size and shape of the auricle. Auricular appendages are common and result from accessory hillocks. The normal ear length varies from 5.5 to 7.5 cm in the adult, and its width is approximately 50% of its length. The long axis of the ear is parallel to the nasal bridge and approximately one ear’s length lateral to the lateral orbital rim.3 The delicate skin draped over the complex framework, consisting of a conchal complex, a helix lobule complex, and an antehelix fossa triangularis complex, make reconstruction a challenge for any surgeon.

A simplified classification divides defects into lobular-type microtia, conchal-type microtia, and anotia (Figure 14.4). Anotia is very rare, and will not be discussed in this chapter.

The goal for the plastic surgeon is to reconstruct an auricle that appears normal and closely matches the opposite side. The 3-dimensional feature makes it a complex reconstruction and one that requires practice in carving the framework before working on a patient. The modern era of autogenous costal cartilage reconstruction began with principles presented by Tanzer,4 was refined by Brent,5,6 and has been augmented by Nagata.7–11 The best material for reconstruction is autogenous costal cartilage because of the low number of complications and its long-term durability. Alloplastic materials have no place in pediatric reconstruction because the risk of exposure and extrusion of these materials is great, and the primary flap available for salvage of problems is expended in reconstruction with alloplastic materials.12

Reconstruction is generally performed around age 7 to 8 years. At that point the ear is close to an adult size, and the chest is large enough for an adequate cartilage graft.13 Nagata7 waits until age 10 years, but his Asian patients are probably of smaller stature than Westerners, and therefore the cartilage available for the graft would be less at age 7 years.

The method of auricular reconstruction that has evolved for my understanding is a combination of the principles outlined by Brent5,6 and the recent refinements described by Nagata.8–11 Nagata’s technique has reduced the steps from four to three for lobular microtia and to two stages for conchal microtia. 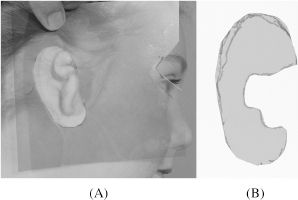 Placement of the auricle and the size of the auricle are the two most important preoperative steps. Before surgery, the opposite normal ear is traced on radiographic films. This pattern is cut and then reversed to design the framework from the rib cartilage (Figure 14.5). At the same time, the radiographic film is marked using the lateral canthus as a landmark. The pattern is placed on the affected side, and the placement for the reconstructed ear is marked. The film is then auto-claved for use during surgery.

The rib graft is harvested from the opposite chest, using an incision parallel to the costal margin. This scar usually heals quite well (Figure 14.6). After exposing the sixth, seventh, and eighth ribs, the template is used to mark the sixth and seventh ribs and the synchondrosis. The template often does not match the rib anatomy exactly, and the surgeon must do some creative planning. I have found that if you leave a gap where the fossa triangularis will be, the helix will bridge the area and you will be carving out the fossa triangularis anyway (Figure 14.7). The rib graft is removed along with the entire cartilaginous eighth rib. The perichondrium of the donor site is maintained in situ as much as possible, and then the perichondrium is closed as a separate layer. Before muscle closure is started, a pain pump is inserted, and the remainder of the incision is closed. The pain pump has resulted in greatly reduced need for narcotics in the postsurgical period. 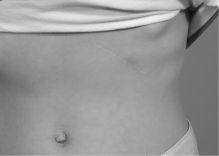 Figure 14.7.  Diagram of template on rib showing how to compensate for rib anatomy that does not fit the template exactly.

Figure 14.8.  Incision in lobule (left) and area of undermining (right).

While the one team is harvesting the cartilage, the second team makes a W-shaped incision on the posterior aspect of the lobule and extends that into the mastoid area for the inset of the lobule (Figure 14.8