The biology of regeneration harnesses highly regulated and complex signaling pathways to direct both recruited and resident cells to secrete and maintain mineralized extracellular matrix.

Distraction has become part of the fabric of craniofacial surgery. It is a tissue engineering concept. The practice of distraction preceded the realization of tissue engineering as a discipline, but for the craniofacial surgeon it is an example of surgically harnessing the body for regenerative medicine. The concept and practice of craniofacial distraction evolved from the need for greater quantities of quality bone during reconstructive procedures. This as a driving force resulted in the development of bony distraction rather than the continued pillage of ribs, iliac crest tibia, or the radius for bone-building blocks.

Bone distraction had its roots in the treatment of extremity fractures after keen observation of bone/callus formation and the use of gradual and continuous traction for fracture reduction. Ilizarov is credited with popularizing bony distraction in the extremities using external fixators for limb lengthening.1 As the Tessier skeletal advancement techniques were refined in the craniofacial skeleton, it became obvious that there was a need to generate bone without disrupting the bone/soft-tissue interface.2,3

Distraction was first applied in craniofacial animal models and introduced in the clinical arena in the late 1980s, when McCarthy and colleagues at New York University initiated clinical studies to demonstrate the efficacy of human mandibular distraction.4–6 Since these initial reports, the treatment concept has been extended to other regions of the craniofacial skeleton. The patient population eligible for distraction is large, involving patients with congenital, developmental, post-traumatic, and postablative reconstruction needs. It is a real-time tissue engineering of bone and the associated soft tissue by harnessing the intrinsic processes involved in healing and regeneration. Within this clinical application are a few underlying principles that allow the healing system to serve as a bone factory for the craniofacial surgeon. 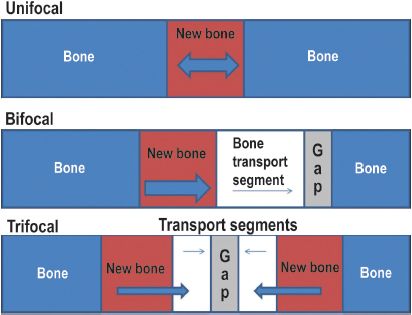 Figure 7.1.  The three types of distraction osteogenesis are unifocal, bifocal, and trifocal. The solid red area represents the newly generated bone formed after distraction of the osteotomy/corticotomy site. The arrows designate the direction of the distraction forces. Transport distraction can be bifocal or trifocal, and is used when there exist a bony gap that needs to be closed. The transport segments are native bone (white) and are used as leading edges of bone to close a gap in the bone.

Biomechanical forces are the inciting signals that initiate elongation of the callus at the osteotomy site. There is an extensive body of literature to characterize the histologic events associated with distraction.8,9 Study of the distraction zone allows for greater understanding of the biologic events and gives insight into how to exert greater control over the biologic process. Extending from the osteotomy site are discrete zones that are staged in the process of forming mature bone: the zone of fibrous tissue, the zone of extending bone formation, the zone of bone remodeling, and the zone of mature bone (Figure 7.2).4

After a corticotomy has been performed and during the active distraction phase there are discrete zones of activity that have been characterized. 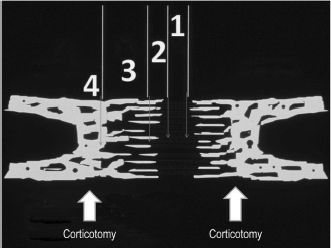 Figure 7.2.  Zones of distraction. Zone 1: Zone of fibrous tissue is an area of longitudinally oriented parallel strands of collagen with mesenchymal progenitor cells located throughout the matrix. Zone 2: Zone of extending bone formation is an area where mesenchymal precursor cells are in direct contact with maturing osteoblasts on small mineralized spicules of calcified extracellular matrix. The osteoblasts assume a longitudinal orientation in the direction of distraction. Zone 3: Zone of bone remodeling consists of advancing bone resorption, osteoclast cutting cones, and greater bony apposition. There are more osteoclasts in this zone than in other regions of the bony generate. Zone 4: Zone of mature bone is the area containing early compact cortical bone located adjacent to the mature bone in the bony generate. Reprinted with permission from Lippincott Williams & Wilkins (Ref. 8).

Zone 1: Zone of fibrous tissue is an area of longitudinally oriented parallel strands of collagen with mesenchymal progenitor cells located throughout the matrix and inflammatory cells serving to secrete the raw material for calcified extracellular matrix formation. The parallel fibers of collagen serve as the raw material and scaffold for calcified extracellular matrix secretion.

Zone 2: Zone of extending bone formation is an area where mesenchymal precursor cells are in direct contact with maturing osteoblasts on small mineralized spicules of calcified extracellular matrix. The osteoblasts assume a longitudinal orientation in the direction of distraction. The osteoblasts have differentiated from the mesenchymal progenitor cell population and help to secrete extracellular matrix within the collagen bundles. This zone is found to have marked increases in alkaline phosphatase, pyruvic acid, and lactic acid throughout the activation period of distraction. It is an area with relative ischemia. This area, the bone generate, serves to signal progenitor cell homing.1,10 The spatial and temporal patterns of transforming growth factor (TGF)-β1 mRNA expression and protein construction coincide with osteoblast migration, differentiation, and extracellular matrix synthesis. In addition, vasculogenesis and osteocalcin gene expression coincide with the TGF-β1-directed mineralization.11

Zone 3: Zone of bone remodeling is an area consisting of advancing bone resorption, osteoclast cutting cones, and greater bony constitution within the generate. There are more osteoclasts in this zone than in other regions of the bony generate.

Zone 4: Zone of mature bone is the area containing early compact cortical bone located adjacent to the mature bone in the bony generate. The bone is further characterized as having spicules of much larger size, and the spicules are less longitudinally oriented but instead are approaching the architecture of mature lacunar canalicular systems.

In the clinical scenario, distraction is compartmentalized into several phases of clinician/patient interaction based on the underlying biology: the latency phase, the activation phase, and the consolidation phase. A latency phase is suggested by experimental evidence to be the optimal interval of time before initiation of mechanical distraction. The latency phase can vary in different clinical scenarios and can range from as short as 24 hours, as in the infant, to upward of a week. In practice, it is known that the presence of mesenchymal cells and angiogenic mechanisms are critical to adequate bony generation. Therefore, with respect to the biology, the latency phase allows for the inflammatory signals within the osteotomy to recruit mesenchymal precursors to orchestrate the complex events that create mature bone. The latency phase also acts as a period of time for critical inosculation of blood vessels that will serve as the supply lines for cellular recruitment and homing. As stated above, the clinical scenario can dictate in part the latency phase, as some authors have suggested in animal models that there is no significant difference in immediate and delayed distraction as far as final bone formation is concerned.12

However, the underlying principles must be that an adequate vascular soft-tissue envelope must be present and that there must be an adequate number of precursor cells recruited from remote and surrounding locations. Obvious to this scenario is the fact that the osteotomized bone segments must be in apposition or close proximity before the onset of activation, because this allows for the secretion of extracellular matrix across the fracture site gap. The secreted extracellular matrix will later undergo mineralization in a time-dependent fashion. In the New York University protocol, we typically wait for 5 days (latency period) before initiating mandibular activation. In the infant, distraction is initiated as early as 1 day after the osteotomy.

The activation phase of distraction is associated with several variables regarding rate and frequency of distraction. In most models of craniofacial distraction, a rate of 1 to 2 mm/day of activation results in adequate bony generation.8,13 It has also been demonstrated that dividing the daily distractions into small, more frequent distraction intervals accelerates bone formation.1 This has been validated by experimental models that assay for biochemical markers of osteoblast formation and maturation.11 It has yet to be determined scientifically what frequency is optimal or whether continuous distraction is optimal. However, there are practical issues of patient care in selecting a frequency that is likely to be implemented by the caregivers, especially in the case of pediatric distraction. It is also important to recognize and respect the underlying biologic principle that the activation phase must not outstretch the ability of mesenchymal precursor migration or bony inosculation. In the New York University protocol, we routinely distract at a rate of 1 mm/day with a frequency of twice-daily activation (0.5-mm increments).

The success of distraction is, in part, directly related to the bone–blood supply as well as the soft-tissue envelope. Events that decrease blood flow to the distracted segments have been shown to negatively affect the regenerate.15 Therefore, conditions such as radiation, the type of surgical technique, and decreased regional blood flow can affect the quality of bone generated. This is likely related to the observation that blood vessels must be in close proximity to the osteocyte, creating a functional lacunar system. Experimental evidence suggests that nutrient vessels must be at least 100 μm away from the healing callus to have adequate calcified extracellular matrix deposition.16 Experimental data suggest that the distraction zone becomes relatively ischemic for a prescribed period of time during activation, and that endothelial and mesenchymal progenitor cells home to the ischemic generate site during activation and remain present throughout consolidation.10 In unsuccessful distraction, it is evident that persistent ischemia may prevent mesenchymal progenitors from differentiating. Ischemia leads to the production of fibrous tissue or scar, lacking osteocytes and endothelial cells.17

Stable fixation of the osteotomized bone segments is a critical factor for successful distraction; distraction in the face of skeletal instability is futile. In a stable environment, bone formation is created directly throughout the distraction zone without a cartilaginous intermediate. Motion at the osteotomy site results in a mixture of unorganized cartilage and fibrous tissue deposition, that become interposed within the distraction zone. The effect of stable fixation on generate bone formation is thought to be multifactorial, but it is clear that motion can affect vasculogenesis through shear and by inducing granulation tissue.9,18 In clinical terms, ischemia-induced fibrous tissue interposed within the distraction site leads to fibrous union and pseudoarthrosis.

Distraction osteogenesis has been applied clinically to the mandible in every age group and has included patients with congenital mandibular hypoplasias as well as developmental, posttraumatic, and postonco-logic ablation deficits. It is important to recognize that distraction can be accomplished in the face of soft-tissue deficiencies because, by its nature, elongation of the bone similarly elongates the associated soft tissue, a phenomenon termed distraction histiogenesis.