ALLOTRANSPLANTATION:
FROM A BASIC SCIENCE
PERSPECTIVE

Over the last 2 decades, the plastic surgery research laboratory at Cleveland Clinic has developed numerous craniomaxillofacial allotransplant models (in rats) evaluating various immunosuppressive protocols for tolerance induction. These include full face/scalp, hemiface, composite hemiface/calvarium, rat maxilla, composite osteomusculocutaneous hemiface/mandible/tongue, and composite midface, composite hemiface, and eyeball allotransplantation model.1–7 Similarly, research from other laboratories has reported analogous studies in large-animal models such as nonhuman primates, pigs, dogs, and rabbits (Table 18.1). With this in mind, the craniomaxillofacial surgeon should be aware of the current state of the art in relation to basic science investigation and those animal models of importance. 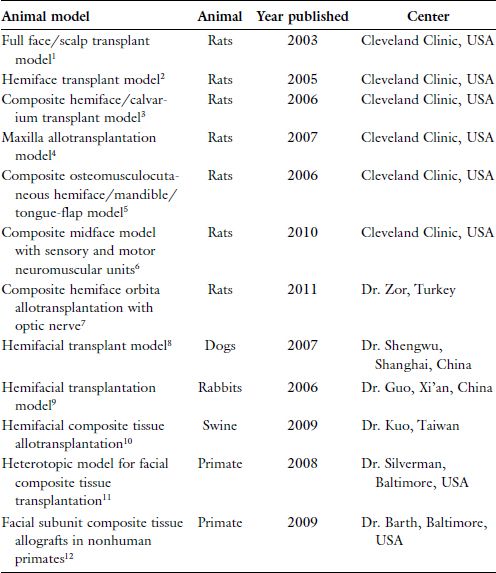 (MHC) barriers in the rodent model. Transplants were performed between semi-allogeneic Lewis–Brown-Norway (LBN) (RT11+n) donors and Lewis (LEW) (RT11) recipients. In the donors, using an alloflap based on the bilateral common carotid arteries and external jugular veins, the entire facial skin and scalp flap, including both ears was harvested. In the recipient, a facial/scalp defect was created by excising facial skin, scalp, and external ears. The facial nerves and muscles, and the perioral and periorbital regions, were preserved to avoid functional deficits that could interfere with animal feeding, breathing, and eye closure. Both common carotid arteries were used to perfuse the full facial/scalp alloflap. Arterial anastomoses were performed to either the recipient’s common carotid arteries (end-to-side) or external carotid arteries (end-to-end). Venous anastomoses were performed to either the external jugular vein on one side or to the anterior facial veins (end-to-end) on the contralateral side. Postoperatively, the recipient animal received cyclosporine A (CsA) monotherapy at a dose of 16 mg/kg/ day, tapered to 2 mg/kg/day over 4 weeks, and was maintained at this serum level for more than 200 days.1,13

Recently, to improve the survival of the facial/scalp alloflaps, we have introduced a new approach by modifying the arterial anastomoses in the recipients. A single (unilateral) common carotid artery of the recipient was used to vascularize the entire transplanted facial/ scalp flap. Different modifications of the arterial anastomoses were evaluated. With these modifications, postoperative mortality of the animals has been significantly reduced by avoiding the complications associated with bilateral common carotid artery anastomoses.

In this model, facial/scalp allotransplants are performed between fully allogeneic ACI (RT1a) donors and LEW (RT11) recipient rats. The same CsA immunosuppressive protocol as in the previously described model resulted in more than 180 days of facial/scalp allo-flap survival.14

To further shorten surgery time and brain ischemia time, we introduced a hemifacial allograft transplant model that is technically less challenging than the full facial/scalp model. This model has been used to test induction of operational tolerance across MHC barriers. Hemifacial allotransplants were performed between semi-allogeneic LBN (RT11+n) and fully allogeneic ACI (RT1a) donors and LEW (RT11) recipients. Composite hemifacial/scalp alloflaps, including the external ear and scalp, based on the common carotid artery and external jugular vein, were harvested from the donors. In the recipient, the hemifacial/scalp skin was excised, including the external ear. The arterial and venous anastomoses were performed to the common carotid artery (end-to-side) and to the external jugular vein (end-to-end), respectively. The same CsA monotherapy immunosuppressive protocol was used, and 400 days of survival were achieved for semi-allogeneic transplants and 330 days for the fully MHC-mismatched hemifacial transplant recipients.2,15,16

A composite hemiface/calvarium transplantation model in the rat was created for the purpose of incorporating vascularized calvarial bone, based on the same vascular pedicle, as a new treatment option for extensive craniomaxillofacial deformities with large bone defects. Composite hemiface/calvarial transplants were performed across the MHC barrier between LBN and LEW rats. Hemicalvarial bone and face alloflaps were dissected on the common carotid artery and jugular vein, and were transplanted to the de-epithelialized donor faces. All rats received tapered and continuous doses of CsA monotherapy. Evaluation methods included flap angiography, daily inspection, computed tomography (CT), and bone histology. Flap angiography demonstrated an intact vascular supply to the bone. The average survival time was 154 days. No signs of rejection or flap loss were noted at 220 days posttransplant. Bone histology at days 7, 30, 63, and 100 posttransplant revealed viable bone at all time points, and CT at days 14, 30, and 100 revealed normal bones without resorption. For extensive face deformities, involving large defects of soft and bony tissue, this osteomusculocutaneous hemiface/calvarium flap model serves to evaluate new reconstructive options for covering multitissue defects in one surgical procedure.3

A rat model was developed for investigating vascularized maxilla allotransplantation for reconstructing complex maxillary defects. Maxillary allotransplantations were performed across the MHC barrier between 10 LBN and 10 LEW recipient rats under CsA monotherapy. Grafts were dissected along Le Fort II osteotomy lines based on the common carotid artery and external jugular vein, and then transplanted to the anterior abdominal wall via microvascular anastomoses. Alloflaps were examined by CT, flow cytometry, angiography, and histology. The alloflaps survived up to 105 days without signs of rejection. A high level of donor-specific chimerism for T- and B-cell lineages was maintained. The incisors continued to grow; tooth buds, bone, cartilage, and mucosa remained intact. Moderate inflammation of the nasal and oral mucosa and keratinous metaplasia were noted histologically. This maxilla allotransplantation model allows one to study immunologic responses and demonstrates potential clinical applications based on the growth properties of the alloflap. Surviving recipients, at more than 105 days, showed no indication of flap loss, partial necrosis, or rejection. The incisors grew more than 10 mm during the follow-up period. Flow cytometry analysis of donor-specific chimerism in the peripheral blood, performed at day 105 posttransplant, revealed 12.5% of CD4FITc/RT1n-Cy7 and 5.3% of CD8PE/ RT1n-Cy7 T-cell subpopulations. Analysis of the B-cell population revealed 4.7% of CD45RAPE/RT1n-Cy7 donor-derived cells in the peripheral blood of the maxilla recipients. Histologic evaluation revealed no signs of rejection and intact allograft structures, including teeth, tooth buds, tooth pulp, bone, cartilage, oral mucosa, nasal mucosa, and soft-palate musculature.4