Moyers1 defines posterior crossbite as a term used to indicate an abnormal buccolingual (labiolingual) relationship of the teeth. In other words, it is a deviation from ideal occlusion in the transverse plane of space in posterior segments. This anomaly can occur between one single posterior tooth or a group of teeth, unilaterally or bilaterally; it can be dental, skeletal, or a combination of both, and it can result from various combinations of transverse malrelationships between the maxillary or mandibular dental arch.

Posterior crossbites are not self-correcting (except some during the primary dentition caused by premature contacts) and in some situations worsen during later stages of the dentition; therefore, they warrant early detection and intervention. This chapter discusses the characteristics and management of posterior crossbites, especially those accompanied by mandibular shift.

Reports indicate that posterior crossbites are very seldom self-correcting; delayed treatment and asymmetric muscle strain on orofacial structures can have adverse effects on the temporomandibular joint and masticatory system and cause skeletal growth changes.5,6 Tomographic studies have shown that the asymmetric position of the condyle within the fossa in children with unilateral crossbite is restored after early treatment.5–7

Several theories concerning the etiology of posterior crossbite have been proposed. This anomaly has been associated with hereditary or congenital conditions, such as congenital developmental anomalies (cleft palate or asymmetric growth of the maxilla or the mandible), as well as some pathologic conditions, such as arthritis, acromegaly, muscular dystrophy, condylar hypoplasia or hyperplasia, and osteochondroma.9–11 Posterior crossbite has also been attributed to local factors such as premature loss or prolonged retention of primary teeth, crowding, and abnormalities in eruption sequence.

A review of the literature revealed that most investigators12–15 agree that the following are the most common causes of posterior crossbite:

In general, in posterior crossbite, skeletal, muscular, or dental factors or a combination of these might be involved under the influence of genetic, congenital, environmental, functional, or habitual origins.

Allen et al16 evaluated the skeletal contribution to posterior crossbite and found that the two variables often associated with the anomaly were a smaller ratio of maxillary to mandibular intermolar dental width and a greater lower facial height. A small maxillomandibular width ratio may arise from genetic or environmental factors.

As an example of genetic factors, Fig 12-1 shows the dental occlusions of identical twin sisters, both of whom exhibited unilateral posterior crossbite, one on the left side and one on the right side.

Besides the hereditary and congenital causes that are rarely the cause of this anomaly, the other previously mentioned factors are the most common local causes, with an especially high prevalence during the primary and early mixed dentitions. Thus, practitioners have a responsibility to perform careful examinations and thereby ensure early recognition of these factors, which are interacting in young patients during a critical stage of occlusal development.

Many investigators have reported the effects of mouth breathing on the child’s head, jaw, and tongue posture as well as occlusion. Souki et al18 studied 401 children aged 2 to 12 years. The children’s mouth breathing was confirmed by otorhinolaryngologists, who reported a higher prevalence of posterior crossbite, anterior open bite, and Class II malocclusion in mouth breathers.

Nasal obstruction and mouth breathing, which are prevalent during the primary and early mixed dentitions as a result of hypertrophied adenoids or tonsils and allergic rhinitis, are important causes of maxillary constriction and posterior crossbite. Therefore, when a child with posterior crossbite is examined, the assessment should include evaluation of nasal respiration as well.

Oulis et al19 studied the incidence of maxillary posterior crossbite in a sample of 120 children who displayed hypertrophied adenoids with or without enlarged tonsils and underwent adenoidectomy. A lateral cephalometric radiograph was obtained for each patient to relate the presence of crossbite to the severity of upper respiratory airway obstruction. Results indicated that 47% of the children examined had developed a posterior crossbite.

The prevalence of posterior crossbite in the primary and mixed dentitions has been reported with a wide range; generally, studies have found that unilateral crossbite coupled with a lateral mandibular shift have a greater prevalence relative to other types of crossbite.

In a sample of 898 4-year-old Swedish children, Thilander and Lennartsson9 identified crossbites in 9.6% of the children. Kutin and Hawes4 studied 238 nursery school and 277 second grade children and found some form of posterior crossbite in 8% of 3- to 5-year-old children and 7.2% of 7- to 9-year-old subjects. The prevalence of crossbite did not differ greatly between girls and boys. Hanson et al23 studied 227 children aged 3 to 5 years and found that the percentage of children with posterior crossbites exceeded 23%.

Many reports have indicated that serious defects can result from neglect or delays in treatment of posterior crossbite. Abnormal movement of the mandible resulting from mandibular shift can place a special strain on orofacial structures, causing adverse effects on the temporomandibular joint and masticatory system and asymmetric mandibular growth.

Posterior crossbites are usually accompanied with some maxillary constriction and therefore can create insufficient maxillary arch width and space deficiencies in the anterior segment. In some cases, these conditions may result in canine impaction or ectopic eruption and destruction of adjacent teeth (Fig 12-2). Early correction is advised to normalize the occlusion and prepare an environment for normal occlusal development.

Fig 12-2 (a to e) Neglected posterior cross-bite, causing crowding and ectopia of the canines and destruction of the lateral incisor roots.

Primozic et al24 assessed facial and cast asymmetry using three-dimensional laser scanning before and after 6 months of treatment in 30 children with posterior crossbite. They also examined 28 children without crossbite for comparison. The children with crossbite had statistically significantly greater asymmetry of the face, especially the mandibular third, and a significantly smaller palatal volume than did the subjects without crossbite. The researchers also found that treatment of a crossbite in the primary dentition corrected the facial asymmetry at a later age.

Kennedy and Osepchook2 reviewed the literature regarding unilateral crossbite and concluded that unilateral crossbites with mandibular shift are not self-correcting; can cause skeletal, dental, and muscle adaptation; and have some association with temporomandibular disorders. Kennedy and Osepchook2 also recommended early intervention for crossbite, which can be difficult to treat in adults without a combination of orthodontics and surgery.

The foundation of dental occlusion starts when the primary first molars reach occlusion. Many dentoskeletal abnormalities start and develop during the primary and early mixed dentitions and are recognizable at this age. Considering the damage to dentoskeletal structures, arch length, and mandibular growth symmetry that can arise from delayed correction of posterior crossbite, almost all investigators recommend early intervention. Correction of posterior crossbites in the permanent dentition is much more complicated and in some cases may require surgery.

The best time for correction of posterior crossbite is during the late primary or early mixed dentition; technically the expansion procedure is easy and fast and provides good and stable results. Almost all posterior crossbites at these ages are bilateral because symmetric constriction of the maxillary arch causes a unilateral mandibular shift toward one side that looks like a unilateral crossbite. Treatment involves symmetric bilateral expansion.

Early correction of posterior crossbites is simple, efficient, and stable and has the following advantages:

• It establishes a better environment for occlusal development. • Expansion unlocks the occlusion and promotes better function.

• Rapid palatal expansion not only corrects posterior crossbites but also increases nasal airway capacity, which is an important benefit for nasal breathing problems that are common at these ages.

Posterior crossbites have many etiologic factors and several different morphologic characteristics; thus, differential diagnosis is an essential part of treatment planning. Posterior crossbite can be dental, dentoalveolar, skeletal, or functional; each of these types can be unilateral or bilateral (Fig 12-3). Posterior crossbite can also result from other combinations of transverse malrelationships between the maxillary or mandibular dental arch. These include maxillary constriction or maxillary overexpansion, mandibular constriction or mandibular overexpansion, or a combination of these. These types of posterior transverse abnormalities are distinguished as nonbite or buccal bite, with lack of occlusal contact. Depending on the type of occlusion and number of teeth involved, different terms, including piston bite, Brodie syndrome, or scissors bite, have been used. 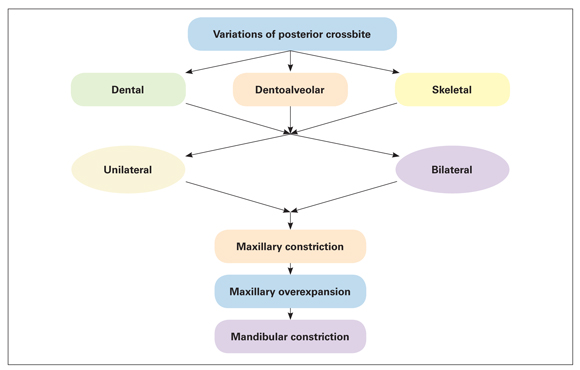 Functional posterior crossbite is a kind of crossbite caused by an occlusal interference that forces the mandible to shift laterally to achieve maximum contact in occlusion. This is a common type of posterior crossbite observed during the primary or mixed dentition (Fig 12-4).

Maxillary constriction is the most common cause of functional shift and unilateral posterior crossbite during the primary or early mixed dentition. Careful clinical and cast evaluations will reveal this situation and confirm symmetry of the maxillary arch; early intervention and bilateral expansion prevent functional shift and cure unilateral crossbite (Fig 12-5; see case 12-2).

Buccal crossbite, or buccal bite, is caused by a buccal displacement of one or multiple maxillary teeth in relation to the opposing tooth or teeth in the posterior segment of the arch. In this type of anomaly, if the affected area includes all left or right teeth, or both posterior segments, the mandibular arch is collapsed within the maxilla; this condition is also called piston bite, scissors bite, or Brodie syndrome (Fig 12-6).

Fig 12-7 (a to d) Unilateral lingual crossbite resulting from the lingual position of the mandibular right segment.

Palatal crossbite is caused by the palatal displacement of one or multiple maxillary teeth in relation to the opposing mandibular tooth or teeth, as a result of the narrower maxillary arch. If the affected area includes all left or right teeth or both posterior segments of the maxilla, it is called complete maxillary collapse or scissors bite (see Fig 12-2b).

Scissors bite occurs when one or more posterior teeth are positioned completely buccally or lingually to the opposing teeth and exhibit a vertical overlap in one arch.

One of the most complex and difficult transverse abnormalities is a nonbite malocclusion called Brodie bite, Brodie syndrome, scissors bite, or nonbite occlusion. In this abnormality, there is no contact between maxillary and mandibular posterior occlusal surfaces. This anomaly can affect just the molars or it can extend to the premolar and canine areas. Brodie syndrome occurs in 1.0% to 1.5% of the population.25 Traditionally, this anomaly has been treated with extractions, dental arch compensations, or orthognathic surgery.

During the past 20 years, distraction osteogenesis has been shown as a viable treatment modality to correct skeletal problems, including Brodie syndrome with transverse mandibular deficiency and mandibles that are locked within the maxilla. Mandibular expansion has been achieved with midsymphyseal osteotomy followed by gradual expansion with a special expander screw.

To correct unilateral scissors bite, Guerrero et al25 recommended a parasymphyseal osteotomy on the ipsilateral side. Legan26 suggested using cross-arch elastics to increase or inhibit expansion in patients with asymmetry. The patient in that report was also treated with distraction osteogenesis that included a custom-made hybrid distractor.

Nonsurgical correction of bilateral Brodie syndrome is presented in case 12-8.

Recognition of posterior crossbites is not difficult, and a simple clinical evaluation of occlusion can easily detect the problem. However, because this anomaly can have various morphologic characteristics, careful differential diagnosis is an essential part of treatment planning. To determine what type of crossbite is present, it is necessary to answer the following questions:

• Is there a functional jaw shift on closing?

• Is the crossbite unilateral or bilateral?

• Is the problem dental, skeletal, or a combination?

• Is the problem related only to the maxilla or the mandible or is it associated with both jaws?

Careful clinical and paraclinical examinations are essential to differentiate the kind of posterior crossbite that affects the patient.

Orthodontic clinical examination of a child for any type of dentoskeletal abnormality includes a thorough evaluation of orofacial structures both in stasis and in function (see chapter 3). Lack of harmony of centric occlusion and centric relation is particularly important in the diagnosis of mandibular shift problems.