Management of the Premaxilla/Maxilla in Bilateral Cleft Lip and Palate

Fig. 19.1
A graph depicting forward growth of the maxilla in three groups of individuals with bilateral cleft lip and palate and a group of controls (Reprinted with permission from Vargervik (1983))

Fig. 19.2
Mandibular length increase (Reprinted with permission from Vargervik (1983))
In most centers, surgical premaxillary setback in the infant has been limited to extreme cases where taping or other premaxillary manipulation has not succeeded in reducing the premaxillary prominence enough to allow lip closure. There may also be circumstances where the patient comes for treatment at a later age with an untreated prominent or vertically overdeveloped premaxilla where surgical repositioning cannot be avoided (Murthy 2009). A recent three-center study reported negative effects at age 12 years of premaxillary repositioning of the premaxilla at the time of alveolar bone grafting at an average age of 9.9 years (Bartzela et al. 2011).
Less drastic measures to achieve retraction of the premaxilla prior to lip repair include the “Latham appliance.” When successful, this may retract the entire premaxilla to a position between the lateral segments. This has also been proven to have a deleterious effect on the forward growth of the maxilla (Berkowitz et al. 2004). Thus, it appears that any approach that results in retraction of the entire premaxilla, including the ­anterior nasal spine area, has the potential to contribute to maxillary growth inhibition.
The currently often-advocated nasoalveolar molding therapy may also succeed in bringing the entire premaxilla back to a position between the lateral segments (Grayson and Cutting 2001).
This will facilitate a tension-free lip repair and may also allow periosteoplasty if desired. However, most centers are not advocating periosteoplasty or bone grafting in infancy as this also has been shown to contribute to maxillary growth inhibition and to interfere with later expansion. Many studies since the procedure was first used by Skoog in 1965 have shown this. A recent study again documented the deleterious growth effects of periosteoplasty/bone grafting in infancy (Hsin-Yi Hsieh et al. 2010). Long-term positive effects on growth, esthetics, and parent satisfaction from any presurgical infant orthopedics have not yet been documented, according to a recent systematic review of the literature (Uzel and Alparslan 2011).

19.2 Presurgical Management of the Prominent Premaxilla in Our Center

Surgeons prefer a position of the premaxilla that allows lip repair without excessive tension. In most cases in our center, molding of the lower portion and tipping of the premaxilla have proven to reduce the prominence enough to allow a good surgical outcome. In years past, we made a small acrylic cup fitted to the premaxilla. It had four wires for elastic traction to buttons on a bonnet (Fig. 19.3). Currently we use taping directly to the premaxilla as we have found this to be easier for parents to manage, and the results are similar. Lip taping to retract a prominent premaxilla that is in centric position is shown in Fig. 19.4. It is important that traction does not allow the premaxilla to tip to one side. If the premaxilla presents asymmetrically, this should be corrected. An example is shown in Fig. 19.5a–e. The taping is continued until lip surgery is done at about 10 weeks. Two to three visits with the clinic nurse is usually needed during the lip taping period. The purpose of the treatment is easily understood and the procedure easy to follow. It costs little in time and supplies, is generally not uncomfortable, and does not require arm restraints. If judged advantageous, nasal conformers are used in combination with the taping (Fig. 19.6). If there is concern of lateral segment collapse behind the prominent premaxilla, a palatal plate is used with the lip taping.

Fig. 19.3
Retraction of prominent premaxilla with appliance attached to a bonnet 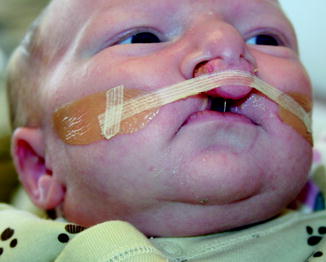 Fig. 19.5
(a) Newborn with asymmetric prominent ­premaxilla. (b) Bringing the premaxilla to midline with taping to one side only. (c) After centralizing, symmetric retraction. (d) Immediately before lip repair at 10 weeks Fig. 19.5 (continued) (e) Age 2 years, lip closed at 10 weeks, palate at 11 months 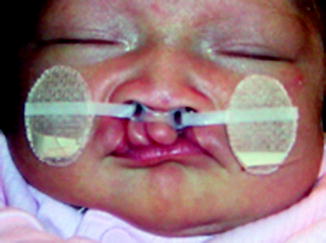 19.3 Postsurgical Management of the Premaxilla/Maxilla in Our Center

The repaired lip will further mold the alveolar process of the premaxilla. Due to the molding of the alveolar process, the primary incisors will be retroclined and may erupt into an anterior crossbite (Fig. 19.7). We generally start the orthodontic preparation for alveolar bone grafting when the 6-year molars have erupted. At that time, the ­permanent incisors are erupting as well. They will also be retroclined even before eruption and will often erupt into an anterior crossbite. At this time, usually around age 7, an expander is placed to correct the position of the lateral segments. The appliance may be fitted with labial arms with hooks for elastics to a face mask for maxillary protraction when needed (Fig. 19.8). This also helps to correct an anterior crossbite. 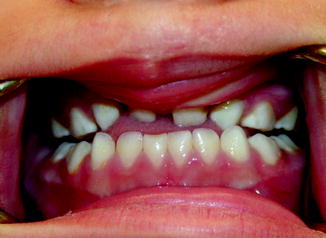 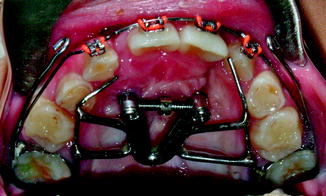 Fig. 19.8
Maxillary expansion with posteriorly hinged fixed expander, labial hooks for face mask traction
Uprighting of the incisors is easily accomplished if the upper portion of the premaxilla has remained prominent. A boy with repaired ­complete bilateral cleft lip and palate is shown through expansion with crossbite correction, alignment of maxillary central incisors, bone grafting, and lower first bicuspid extraction, waiting for canine eruption to start phase II orthodontic treatment (Fig. 19.9a–e). The canines are erupting forward to contact with the central incisors and will be substituted for the missing lateral incisors (Oberoi et al. 2009).

Fig. 19.9
(a
Only gold members can continue reading. Log In or Register to continue