Fig. 14.1
a Preoperative view of lesion. b Postoperative oro-antral communication. c Maxillary obturator
Carlson performed marginal mandibular resections in patients whose clinical and X-ray examinations revealed necrotic bone isolated from the alveolar portion. Segmental resection was carried out when the lesion was more extended or in patients with an orocutaneous fistula [24].
When BIONJ causes a pathological fracture, the affected part of the jaw is resected, a reconstruction plate is inserted, and no bone reconstruction is performed, since the remaining part of the jaw is extremely thin and most patients have a negative quod vitam prognosis due to the presence of tumors or other comorbidities, which makes reconstruction inappropriate (Fig. 14.2) [2, 3, 21, 28]. Marx suggests setting the first hole of the plate close to the resection margin, since perforation can have negative effects on the periosteum and bone margin [27]. In some BIONJ patients, plates cannot be inserted, generally for three main reasons: (1) the risk of secondary infection around the plate is too high, with further surgery to remove the plate causing the loss of soft tissue; (2) the loss of soft tissue is extensive enough that there is insufficient healthy tissue to cover the plate, and the patient is not a candidate for flap surgery; (3) the patient is very weak due to chemotherapy. In these cases, surgery should be brief and limited, with the insertion of a plate, if any, postponed to a period when the patient’s systemic condition and that of the local tissue improve. Nasogastric tubes or tracheostomy are not usually necessary in these cases as most patients adapt to the resulting malocclusion; however, they become necessary in the case of resection of the mandibular symphisis along the midline [27]. 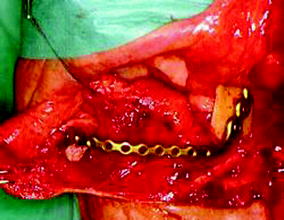 Fig. 14.2
Mandibular reconstruction with locking plate
Bone reconstruction of the surgical defects is uncommon because the anesthesiological risks for oncology patients are high and the fact that after resection and the insertion of a reconstruction plate the pain disappears and a good functional recovery follows. In addition, in patients with multiple myeloma, bone reconstruction is not recommended because of the risk of medullary involvement [27].
Very little has been published on the role of the free fibula flap in the treatment of BIONJ [17]. Also, vascularized bone reconstruction is not recommended for BIONJ patients due to the risk of necrosis in the treated area [19]. Coletti, in 2008 [28], described a case of pseudoarthrosis that occurred after a bone graft and argued that the traditional surgical approach of flap reconstruction was not appropriate due to the risk of a necrotic bone at the resection margins [8, 21]. Local pedunculated flaps have been used for patients with a large mucosal dehiscence or bone sequestrum. In those sites that are amenable to local tissue transfer, a Bichat flap can be rotated in the surgical defect to facilitate closure without tension in the margins; the donor site mucosalizes secondarily [3]. Tirelli et al. [8] described a case of mandibular bone resection on healthy margins, followed by reconstruction with a plate and using a lobed skin flap and the platysma muscle to cover the surgical wound. As explained by those authors, flap collocation was not successful since it resulted in fistula formation and dehiscence within the flap [8].
According to Engroff, in many cases the area of bone involvement is well defined and it is possible to obtain margins of vital bone. While it is true that surgery can lead to further bone necrosis, this does not mean that the disease cannot be treated [17].
In many patients with stage III disease, there is a significant loss of mucosa and/or skin due to the anti-angiogenic effect of bisphosphonates, and above all because of long-term secondary infections, which lyse the soft tissues and provoke subcutaneous soft-tissue fibrosis. Therefore, it is important to assess the degree of soft-tissue loss, the extension of fibrosis, and the potential presence of fistulas to determine whether a flap is necessary. Generally speaking, the loss of soft-tissue and fibrosis is higher than expected [27].

If after the insertion of a reconstruction plate an insufficient closure, or a closure under tension or without tension but with fibrotic tissue is performed, the exposed plate can lead to an open wound, with subsequent infection and the need for further surgery. The most commonly used flap is the pectoralis major myocutaneous flap based on its speed of application, allowance of adequate blood flow, and the transfer of sufficient tissue to replace large quantities of soft tissue (Fig. 14.3). The three main pedicles (thoracoacromial, thoracic, and high thoracic) are retained. In male patients, an oblique incision is often performed in order to gain access to the muscle, while a lateral approach in the inframammary fold is used in female patients in order to cover the incision and preserve the breast contour. With both incisions, a skin paddle is placed medially below the nipple at the origin of the pectoralis major, towards the lateral margin of the sternum at the junction of the sixth rib. The skin paddle and the muscle fascia are sutured at the same time to prevent lesions to capillaries. The muscle is then detached from ribs 6, 5, and 4 (in this order), and from the lateral margin of the sternum to include the medial third of the clavicle. The tendon insertion is sectioned and the flap is placed through the neck on a subplatysma level [27]. 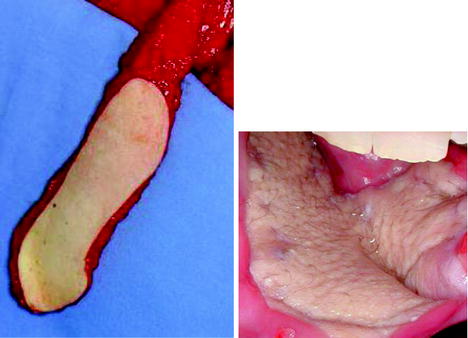 When the pectoral flap is not the best solution, due, for example, to a mammary prosthesis, previous chest surgery or thoracic trauma, or large breasts, the closest flap is the trapezius myocutaneous flap, which is based on the transverse cervical artery and vein. The 6-cm rule is important since the skin paddle needs to be adjacent to the midline of the back and its diameter should not be more than 6 cm below the lower point of the scapula, with the forearm in a neutral position. The flap extends backwards from the neck half way between the midline and the mid margin of the scapula. This flap requires a half-turn rotation in order to be placed in the defect so as not to affect blood flow [27].

When a primary closure is not possible and the soft-tissue in the rear jaw is limited, a pedicled sternocleidomastoid muscle flap can be placed. This flap is based entirely on the occipital vascular system while the inferior thyroid system must be sectioned to rotate the flap around the mastoid; the superior thyroid system is usually sacrificed. Nevertheless, this flap maintains sufficient blood flow to replace the soft tissues of the mandibular ramus at the labial commissure. A submandibular incision is used to gain access to the osteonecrotic lesion, together with a parallel supraclavicular incision. The sternocleidomastoid muscle is first detached from the sternal and clavicular insertions, then separated from the anterior and posterior fascia and lifted from the carotid sheath in the deepest tissues. This dissection progresses above the exit point of the spinal accessory nerve. While this exit point limits the rotation arc, in most cases it is sufficient to reach defects located behind the labial commissure. If a further rotation arc is necessary, the nerve must be rotated. Each vital muscle exposed to the oral cavity will undergo re-epithelization [24].

The reconstruction of a defect of the hard palate is carried out using a free radial forearm fasciocutaneous flap, with an adequate vascular pedicle to reach facial veins in the submandibular triangle of the neck. The vascular pedicle is passed through a tunnel in the soft palate, then through the sheath, and up to the facial artery and vein, where a microvascular anastomosis is performed [17].

Tags: Bisphosphonates and Osteonecrosis of the Jaw
Nov 10, 2015 | Posted by mrzezo in General Dentistry | Comments Off on Major Surgery in BIONJ
Premium Wordpress Themes by UFO Themes
WordPress theme by UFO themes