Fig. 6.1
Three-dimensional volume rendering by computed tomography scanning (in an adult). The mental protuberance and the anterior margin of the jaw ramus are seen on the anterolateral side of the jaw
The posterior or posteromedial side (Fig. 6.2), like the anterior side, is obliquely crossed by an internal oblique line, the mylohyoid line, which also links with the anterior margin of the jaw ramus and is the origin of the insertion of the mylohyoid muscle. On its medial aspect, this side presents four small eminences, the apophysis geni, which together form a gradual protrusion called the mental spine. The apophysis geni create superior insertions for the genioglossus muscles and inferior insertions for the geniohyoid muscles. From each side of the mental spine and above the mylohyoid line there is a small transverse excavation, the sublingual fossa, which contains the sublingual gland. Above the mylohyoid, in the proximity of the last two or three molars, a second excavation, the submandibular fossa, contains the submandibular gland. Parallel to the mylohyoid line is a sulcus for the mylohyoid nerve. The superior margin of the jaw is formed by sockets called dental alveoli (Fig. 6.3). 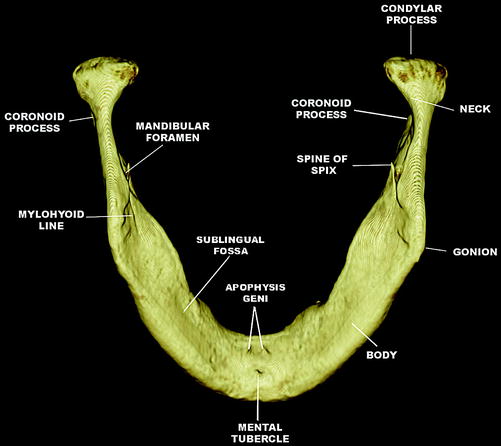 Fig. 6.2
Three-dimensional volume rendering by computed tomography scanning (in an adult). The mylohyoid line, for the mylohyoid muscle, and the apophasis geni, for the insertions of genioglossus and geniohyoid muscles are located on the posteromedial side of the jaw 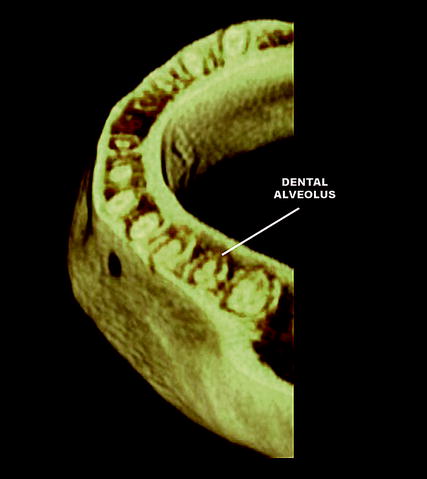 Fig. 6.3
Three-dimensional volume rendering by computed tomography scanning (in an adult). The dental alveoli are seen along the superior margin of the jaw
The inferior margin, or bottom of the jaw, is rounded, with a very rugous oval excavation, the digastric fossa, on each side of the symphysis. This is the site of insertion of the anterior part of the digastric muscle.
Each half of the jaw is crossed by a long canal, the inferior alveolar canals, each of which begins on the upper internal side of the ramus in proximity to the middle part, just behind the Spix spine, heads obliquely downwards and forwards, and then continues horizontally, descending to the bottom of the dental alveolus. The canals reach the dental roots and once in the proximity of the second premolar each divides into a lateral and a medial ramus. The lateral ramus, also called the mental canal, is directed obliquely upwards; toward the outside, it reaches the external surface of the bone through the mental foramen. The medial ramus, or incisive canal, continues its course towards the symphysis and terminates below the roots of the incisors. It is placed in the spongy tissue of the bone, with various tubules originating from its upper side that ascend toward the alveolar cavity. The nerve and the alveolar vessels pass through the dental canal. The tubules constitute a passage for the collateral ramifications sent from both the nerve and the vessels to the roots of the teeth.

The jaw ramii are quadrilateral expansions heading obliquely upwards and downwards, forwards and backwards but compressed on the lateromedial side. They have two sides, lateral and medial. The lateral side presents robust lines aimed at the inferior insertion of the masseter muscle (Fig. 6.4). The medial side, in its central part, presents a wide orifice, the mandibular foramen, containing the nerve and inferior alveolar vessels. This orifice is surrounded upwards and downwards by the Spix spine, a triangular lamella heading vertically upwards and the site of the insertion of the sphenomandibular ligament. The inferior and posterior sides of the orifice give rise to the mylohyoid sulcus, heading obliquely downwards and forwards to the corpus of the bone; it is crossed by both the nerve and the mylohyoid vessels. The rugous section behind the mylohyoid sulcus, the pterygoid tuberosity, forms the inferior insertion of the internal pterygoid muscle (Fig. 6.5). 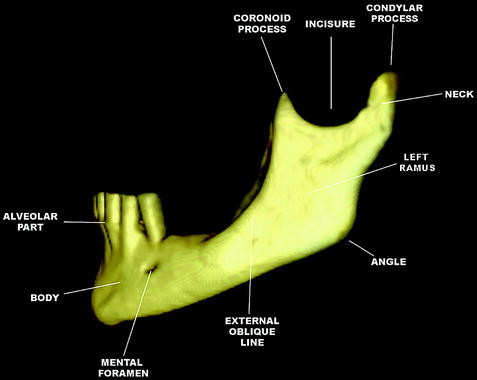 Fig. 6.4
Three-dimensional volume rendering by computed tomography scanning (in an adult). Robust lines accommodating the inferior insertion of the masseter muscle are seen along the lateral side of the jaw ramus 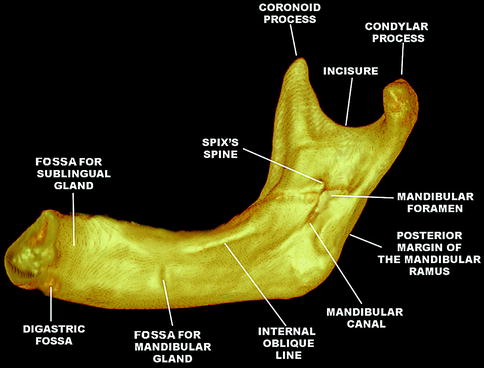 Fig. 6.5
Three-dimensional volume rendering by computed tomography scanning (in an adult). The rugosity for the inferior insertion of the internal pterygoid muscle is located on the medial side of the jaw ramus
The four margins of the jaw ramus are divided into anterior, posterior, superior, and inferior margins. The superior margin, heading backwards to forwards, is formed by two processes: anteriorly, the coronoid process and posteriorly the mandibular condyle. They are separated by a deep sigmoid incision. The mandibular condyle is an ellipsoid eminence, compressed on its anteroposterior side. Its long axis travels lateromedially, forwards to backwards. Below the condyle is a restricted section called the mandibular collum, the site of the fossa for the insertion of the external pterygoid muscle. The coronoid process creates the insertion for the temporal muscle. The inferior margin of the jaw ramus forms an angle with the inferior margin of the corpus and the protruding point, linking with the posterior margin to form the mandibular angle.

Histologically, the mandible has the same structure as flat bone in that it is formed by a central mass of spongy muscle tissue surrounded by a thick layer of highly resistant compact tissue (Fig. 6.6). The central tissue is very dense but near the alveolar channel it consists of spongy tissue. In the proximity of the condyle, the peripheral layer of the compact tissue becomes extremely thin: the bone protrusion is almost entirely formed by spongy tissue, whose trabeculae are mostly oriented vertically, especially in the proximity of the collum. The coronoid process, by contrast, has only a thin layer of spongy tissue that is enclosed by a very thick and dense layer of compact tissue. 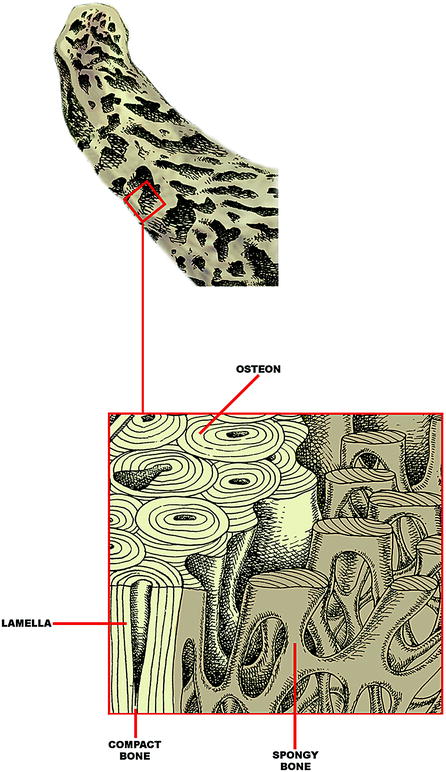 Fig. 6.6
Bone tissue of the jaw: the central tissue near the alveolar channel is made up of spongy tissue
Only gold members can continue reading. Log In or Register to continue

Tags: Bisphosphonates and Osteonecrosis of the Jaw
Nov 10, 2015 | Posted by mrzezo in General Dentistry | Comments Off on Biomorphology in BIONJ: Anatomy and Histology
Premium Wordpress Themes by UFO Themes
WordPress theme by UFO themes