Etiopathogenesis and Clinical Aspects of BIONJ

The inhibition of osteoclastic activity is the main action of BPs, but since the activities of osteoclasts and osteoblasts are coupled, the final result is suppression of bone remodeling [8–10]. In normal bone homeostasis, osteoclastic resorption is tightly linked to osteoblastic bone deposition, and both functions are required for the repair of physiologic microdamage. In line with the hypodynamic bone theory, the primary mechanism for the development of ONJ in patients under BP treatment is probably the over-suppression of normal bone remodeling to an extent that local microdamage from normal mechanical loading or injury (e.g., dentoalveolar surgery or trauma) cannot be repaired, persists, and accumulates, finally leading to bone necrosis.
Several studies have indicated the importance of the route of administration, cumulative dose, and potency of BPs in the development of ONJ. Most published cases have described patients with advanced malignancies, particularly multiple myeloma and breast cancer, who received frequent and high doses of intravenous nitrogen-containing bisphosphonates (N-BPs). Of these, zoledronate and pamidronate are associated with a much greater risk than non-N-BPs. Estimates of the incidence of BIONJ in patients receiving intravenous BPs range from 0.8 to 12%, with a clearly lower incidence in patients taking oral BPs to treat non-malignant bone diseases such as osteoporosis, rheumatoid arthritis, and Paget’s disease.
The most striking difference between these oral and intravenous administration is the bioavailability of the drug. Oral bioavailability is around 1% due to higher ionization at physiologic pH when the drug is adsorbed by the intestinal mucosa. The greater bioavailability, high cumulative doses, and high potency of intravenous BPs explain the significantly higher incidence of ONJ in this group [1–3].
Based on published data, it has become clear that longer duration of BP treatment and a higher cumulative dose of these drugs are associated with the development of ONJ. Many studies revealed that these patients had received greater doses of BPs and for a longer period than was the case in non-ONJ patients. A recent study conducted on 3,994 patients showed that cases of ONJ were associated with significantly longer median duration of pamidronate (1.68 vs. 0.59 years in breast cancer and 1.55 vs. 0.30 years in multiple myeloma) and zoledronic acid (2.04 vs. 0.73 years in breast cancer and 1.85 vs. 0.67 years in myeloma) treatment [11]. Furthermore, the onset of jawbone necrosis is likely related not only to the cumulative dose of BPs but also to their potency and type. Both factors define the degree of bone remodeling inhibition, since in initial reports the risk of developing ONJ was greater with zoledronic acid than with other BPs [12, 13].
In concert with the direct effects of BPs on bone cells, another potential mechanism to explain BIONJ is based on the drugs’ anti-angiogenic properties, given that osteoclasts differentiate from hematopoietic precursor cells. Some authors have suggested that BPs promote avascular necrosis of the jaw by inducing obliteration of the regional blood vessels [14–16]. BPs, particularly N-BPs, are thought to exert several adverse effects on the local blood supply. The mechanism of these effects may be attributable to a complex interaction of BPs with growth hormone (GH) and insulin-like growth factor I (IGF-I), both of which are involved in regulating the circulation in bones. BPs were shown to inhibit endothelial cell function in vitro and in vivo and to significantly decrease circulating levels of vascular endothelial growth factor (VEGF), a potent angiogenic factor, resulting in reduced capillary-tube formation [17, 18]. Since these properties were not recognized during the trial stages of these drugs, it can be hypothesized that the ischemic effects are cumulative over time. The vascular supply to the mandible is inherently restricted whereas the maxilla is well supplied by the vasculature.
Moreover, some studies suggest that BPs also exert effects on soft tissues, with direct toxicity to the oral mucosa, thus contributing to mucosal fenestration and bone exposure [5].

Localization of the damage to the jaw can be explained by the constant stress of strong occlusal masticatory forces. The heightened daily bone remodeling requirements lead to higher concentrations of BPs being taken up in the jaws. That is, given that the bones of the jaw are sites of elevated bone turnover, BP levels within the maxilla and mandible would be selectively elevated [2]. Furthermore, the necrosis is more common in areas where a thin mucosa covers a bony exostosis or bony prominences such as lingual, mylohyoid, and palatal tori [14, 19]. Most (50–80%) cases of BIONJ are preceded by dentoalveolar surgery or dental trauma [11, 20–23]. Dental procedures, such as extractions or implants, are recognized as precipitating events since they increase the demand for osseous repair that exceeds the capacity of the hypodynamic bone, resulting in localized bone necrosis. Recent data indicated that the risk of developing ONJ was 53 times higher in patients with previous dental extraction than in patients who had not had a dental extraction during BPs treatment [24, 25]. Physiologically, no complications occur in the healing of a wound in the oral cavity, but when the mandible or maxilla is injured by a pathological process or high radiation doses, the reduced healing potential could increase the risk of necrosis and osteomyelitis at these sites [2].
Moreover, the mandible and maxilla are more frequently the site of infection than all other bones in the body. The jaw is separated from the oral cavity, an area vulnerable to trauma and microbiologically diverse, by a fragile barrier consisting of a thin mucosa and periosteum. Also, profound caries, endodontitis, and periodontitis further contribute to the onset of infections involving the bones of the jaw.
Recently, a novel etiopathogenetic mechanism linking BPs, local infections, and local pH was proposed. Both infections and dentoalveolar surgery have the potential to lower the pH (acidosis) of the oral cavity and associated structures. Physiologically, BPs bind to the bone at neutral pH and dissociate from hydroxyapatite in an acidic milieu. Thus, the consequences of a decrease in pH are not only direct cytotoxic effects on different cells, but also a local increase in active BPs. A recent study conducted by Otto et al. investigated the effects of the N-BPs zoledronate, ibandronate, and the non-N-BP clodronate at different concentrations and at different pH values (7.4, 7.0, 6.7, and 6.3) on mesenchymal stem cells in vitro. The results showed that high doses of N-BPs and a local acidic milieu, such as are frequently present in infections of the jaw, caused a significant decrease in cell survival and activity. Both zoledronate and ibandronate exhibited dose- and pH-dependent cellular toxicity, whereas the response of cells exposed to equimolar concentrations of clodronate was comparable to that in the BP-free controls [3]. These results may be explained by the protonated activation of N-BPs at low pH [26–28].

Advanced age, diabetes mellitus, renal insufficiency, immunosuppressant therapies such as corticosteroids, specific treatments other than BPs, alcohol consumption, cigarette smoking, among others, are considered co-morbid factors for ONJ, as the available data are conflicting and not strong enough to support these conditions as risk factors. Some studies have suggested that neither treatments for breast cancer, such as anthracyclines, tamoxifen, taxanes, trastuzumab, and aromatase inhibitors, nor multiple myeloma treatments, such as anthracyclines, melphalan, and thalidomide, nor patient age, renal insufficiency, alcohol use, and smoking were significantly associated with a greater risk for ONJ [24]. In contrast, others showed a correlation between cyclophosphamide or erythropoietin use in multiple myeloma patients, advanced age, and renal dialysis and the development of ONJ. Moreover, according to recent studies, patients under treatment with the anti-angiogenic drug bevacizumab for metastatic cancers have a greater risk of developing ONJ, while the anti-angiogenic drug sunitinib has been linked with ONJ progression [29–32]. The role of glucocorticoids in the development of necrosis of the jaw remains unclear, but it is well known that the long-term use of systemic steroids promotes aseptic necrosis of the bones, particularly of the femoral heads. However, based on published data, it is probable that high cumulative doses of glucocorticoids are a triggering factor for ONJ [24, 33–35]. Finally, because BP users develop bone necrosis only rarely, individual genetic variations in drug metabolism may influence susceptibility or resistance to BIONJ [2]. A study conducted among multiple myeloma patients treated with intravenous BPs demonstrated an association between a single-nucleotide polymorphism in the cytochrome P450-2C gene (CYP2C8) and an increased risk of BIONJ [36].
Thus, summarizing, BIONJ encompasses a wide range of etiologic factors and may result from one or more of them. It is now well established that intravenous BPs and dentoalveolar procedures are the main risk factors for BIONJ.

The clinical findings in BIONJ patients include the exposure of non-vital, white-yellowish bone tissue surrounded by an inflamed and edematous mucosa in the mouth. This situation can be anticipated in patients describing a vague sensation of pain or discomfort in the affected area.
As previously described, osteonecrosis generally develops after procedures that cause trauma to the jaw (e.g., dental extractions). Episodes of spontaneous onset have been reported and documented and are more likely to occur close to palatal and mandibular tori and in partially or completely edentulous patients (Fig. 7.1). The early signs and symptoms of BIONJ are the same as in any odontogenous infection (halitosis, pain, edema and ulceration of the mucosa, dental mobility). In an advanced stage of the disease, there may be inflammatory and infectious foci (suppurative osteomyelitis), pathological fractures, skin fistulas, as well as oral and nasal antral fistulas, all of which contribute to worsen the symptomatology. Patients at risk for or with established BIONJ may also present with other common clinical conditions, including alveolar osteitis, sinusitis, gingivitis/periodontitis, caries, periapical pathology, and temporomandibular joint disorders [1]. Diagnosis is based on clinical findings rather than on histological or radiographic evidence. Radiographically, the condition has a normal appearance or it may resemble bacterial osteomyelitis or osteoradionecrosis. The clinical appearance and history are sufficient to distinguish ONJ from other delayed bone and wound-healing pathologies [37]. 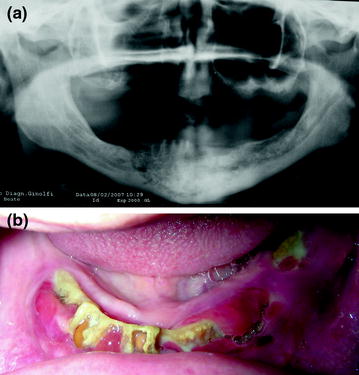 Fig. 7.1
a Osteonecrosis of the mandible, b in a completely edentulous patient
The position paper of the American Association of Oral and Maxillofacial Surgeons (AAOMS) on BIONJ, published in 2009, identified five different categories for BIONJ staging [1]:
“At risk”:
No evidence of necrotic bone in patients treated with oral or intravenous bisphosphonates
Stage 0:
Only gold members can continue reading. Log In or Register to continue

Tags: Bisphosphonates and Osteonecrosis of the Jaw
Nov 10, 2015 | Posted by mrzezo in General Dentistry | Comments Off on Etiopathogenesis and Clinical Aspects of BIONJ
Premium Wordpress Themes by UFO Themes
WordPress theme by UFO themes