Fig. 1.1
One of the first cases of bisphosphonate-induced osteonecrosis of the jaws, with exposed necrotic bone that did not bleed
Like other epidemics, such as the HIV epidemic of the 1980s and the phossy jaw epidemic between 1850 and 1906, there have been denials of the very existence of BIONJ by the respective drug companies, including denial of its importance and risks to patients. Another problem has been the inaccurate terminology used to describe BIONJ [10–13].
One should recall that the strange finding of immune shutdown and death by opportunistic infections in 1980, due to what we now know as HIV infection leading to AIDS, was initially denied and attributed to homosexual behavior and Haitian origins. In addition, HIV infection leading to AIDS was also given incorrect names, such as human T-cell lymphotropic virus I and II, neither of which actually causes AIDS, as well as names such as AIDS-related complex (ARC) [14]. Similarly, the original phossy jaw epidemic, most prominent in the UK and the USA, was also denied by the match-factory owners, who refused to recognize their role in a disease causing severe disabilities and a mortality of 20% (Fig. 1.2) [15]. 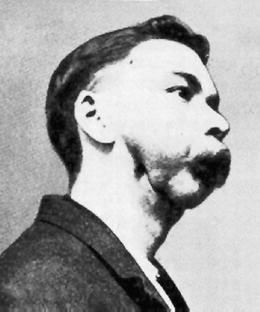 Fig. 1.2
Match-factory worker 1899. Phossy jaw causes fistulas and collapse of the mandible most likely due to a pathologic fracture

If BIONJ represents the second epidemic of phossy jaw, it is worthy reviewing the original epidemic. Although matches were invented in 1826, they were not widely used due to the poor lighting quality of the antimony sulfide and potassium chlorate in the match heads. However, in 1832, clever chemists added white phosphorous because it had a lower ignition temperature. These matches lit easily, even by abrading them on a pant leg or with the flick of a fingernail, and thus became enormously popular. By 1835, numerous match factories arose, producing what was called “strike anywhere matches” (Fig. 1.3). The match-factory workers, referred to as “mixers,” worked 15-hour days over large heated vats of white phosphorus, breathing in the vapors. Proportional to the length of time they worked in the match factory, many of the mixers developed exposed bone in the jaws that failed to heal, became secondarily infected, and produced draining fistulae just like those seen in many modern-day BIONJ patients (Fig. 1.4a, b) [15, 16]. A few of these workers also developed spontaneous leg fractures of the upper leg (femur), much in the same way that alendronate (Fosamax) has now been shown to produce spontaneous subtrochantaric femur fractures in those using the drug for more than 6 years (Fig. 1.5) [17–19]. The match-factory owners insisted that the numbers of cases was smaller than the actual number or they denied the existence of any detrimental effects. In response, a strong popular movement arose to ban “strike anywhere matches” [20]. These cases and the public uproar concerning the deaths and disability caused by the matches led to the Berne Conference in Berne Switzerland and the banning of “strike anywhere matches” in 1906 [21]. 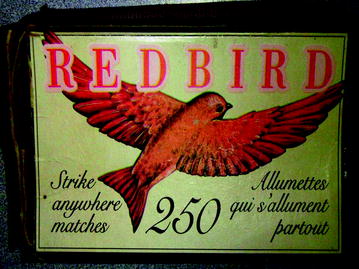 Fig. 1.3
“Strike anywhere matches” were popular because they would light easily due to white phosphorus in the match head 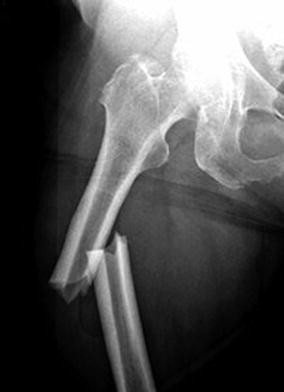 Fig. 1.5
Subtrochanteric femur fracture caused by alendronate (Fosamax) use over 7 years
Since then, rare cases of phossy jaw have been reported in fireworks- and munitions-plant workers whose jobs entail exposure to white phosphorus (P4O10). Additionally, phossy jaw and BIONJ have been linked by the demonstration that P4O10, when combined with water, carbon dioxide, and/or tetrahydrofolate in a one-carbon transfer, and with the amino acid hydroxylysine, all of which are common in the tracheo-bronchial tree, can produce a nitrogen-containing bisphosphonate eerily similar to pamidronate and alendronate, each of which has caused numerous cases of BIONJ (Fig. 1.6) [15].

Fig. 1.6
Likely chemical formula of the phossy jaw bisphosphonate of the 1800s and the formulas of today’s bisphosphonates pamidronate (Aredia) and alendronate (Fosamax)

As any new disease or drug complication becomes more fully recognized, the initial terms used in its description and typically adopted despite little scientific data or clinical experience, need to be revised.
The history of the confused terminology of the condition referred to in this volume as “bisphosphonate-induced osteonecrosis of the jaws” (BIONJ) is similar to that which finally resulted in the name “HIV/AIDS.” Initially, as noted in the Sect. 1.1, this author used the term “avascular necrosis” (AVN) [1], while the American Association of Oral and Maxillofacial Surgeons has adopted “bisphosphonate-related osteonecrosis of the jaws” (BRONJ) [10]. The American Academy of Oral Medicine uses the term “bisphosphonate associated osteonecrosis of the jaws” (BAONJ) [11] and some publications refer to it as osteochemonecrosis [22].
The term “avascular necrosis” is incorrect because BIONJ is a chemical toxicity to the osteoclast, thereby preventing bone renewal (Figs. 1.7, 1.8, 1.9); AVN is, instead, secondary. As the bone fails to remodel and renew itself, the bone cells die off without replacement followed by involution of their vascularity. The term “bisphosphonate-related osteonecrosis” (BRONJ) is inaccurate because the relationship is not defined. Although perhaps initially appropriate, the subsequent accumulation of data has made this term obsolete. The term “bisphosphonate associated osteonecrosis” (BAONJ) is incorrect as well. We know that multiple odontogenic keratocysts are associated with basal cell nevus syndrome; however, the odontogenic keratocysts do not cause the syndrome but are a product of it. Analogously, while a low hemoglobin and low hematocrit may be related to anemia, they do not cause but are only signs of anemia, and while persistent hyperglycemia is related to diabetes it does not cause the diabetes. “Osteochemonecrosis” is incorrect because not all bisphosphonates have activity against cancer cells. Even the claims that zolendronate has such activity have not been confirmed by independent studies and the drug is not approved as a direct chemotherapeutic agent nor does clinical experience support this off-label use. 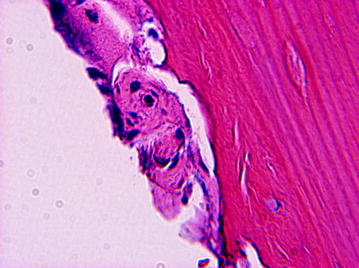 Fig. 1.7
Early toxic effects of bisphosphonate on an osteoclast. Note the cell’s larger size, its numerous and disintegrating nuclei, and its separation from the sealing zone of Howship’s lacunae 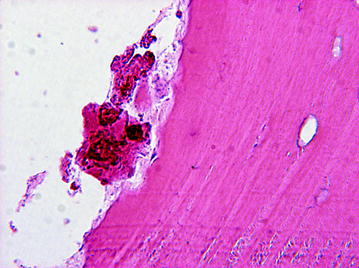 Tags: Bisphosphonates and Osteonecrosis of the Jaw
Nov 10, 2015 | Posted by mrzezo in General Dentistry | Comments Off on Introduction
Premium Wordpress Themes by UFO Themes
WordPress theme by UFO themes