Extracted teeth by routine dental practice and exfoliated deciduous teeth by physiological resorption are dental pulp sources. Isolation of dental pulp stem is quite easy and completely noninvasive: The dental crown should be disinfected briefly before extraction with 0.3 % chlorhexidine and after extraction with iodine and 70 % ethanol. Teeth should be placed into a transport medium, if transported to another lab for isolation procedures. Transport medium should include at least 3 % (w/v) penicillin and streptomycin and 5 μg/mL amphotericin B. Since the oral cavity has the second highest proportion of microbiomes in humans (Group 2012), all instruments should be sterilized against the risk of a microbial contamination. Permanent teeth should be cracked with a mini hammer in order to get access to the pulp chamber and root canals. The crowns of resorbed deciduous teeth may be cracked as well, since the pulp tissue remnants reside in the pulp chamber. Once a clear visual access is established, the pulp tissue can be taken out with toothless surgical pliers.
There are mainly two isolation methods for DPSC: enzyme digestion and the outgrowth method.

In this method, pulp tissue is cut into pieces and placed directly in a cell culture plate with the growth medium.
Although both methods appear to give rise to pulp cells that have stem cell properties (About et al. 2000; Couble et al. 2000; Gronthos et al. 2000; Batouli et al. 2003), the effects of various isolation methods on pulp cell populations have also been questioned. One of the earliest studies by Nakashima showed that four different enzymatic separation (trypsin, collagenase with and without trypsin treatment, and a trypsin–collagenase mixture) had no effect on the morphological characteristics of the cultured pulp cells, but the trypsin pretreatment/collagenase method gave the highest number of isolated cells (Nakashima 1991). Nonetheless, the enzymatic digestion method allows different cell types to develop. While Nakashima reported three different morphologies as spindle, stellate, and epithelial-like cells (Nakashima 1991), Huang et al. showed compact and loose colony-types after enzymatic digestion (Huang et al. 2006). Since enzymatic digestion causes all cell types to be released from the tissue, it is not surprising to observe different cells. However, only cells that have a fibroblastic appearance were able to survive after several passages because of the usage of mesenchymal cell promoting culture media (Huang et al. 2006). On the other hand, Bakopoulou et al. showed that in the enzymatically digested samples, the mineralization rate and the amount of mineralized matrix produced were higher compared to outgrowth cultures. However, the cell culture media was different for the digested and outgrown cultures (Bakopoulou et al. 2011). Contrarily, Spath et al. displayed enhanced differentiation abilities with explant cultures when compared to enzymatically digested DPSC (Spath et al. 2010). However, they cultured trypsin pretreated explants onto a Petri dish coated with fibronectin in MegaCell complete medium. Furthermore, Kerkis and Kaplan reported that they obtained immature dental pulp stem cells (IDPSC) from deciduous teeth by using enzymatic digestion and DMEM low glucose supplemented with 10 % FBS, while the outgrowth method using DMEM/F12 supplemented with 15–20 % FBS gave IDPSC (Kerkis and Caplan 2012). While it is rational to think that SHED is heterogeneous compared to single cell-derived colonies of IDPC, wider screening gene expressions of the latter do not prove that these two isolation systems gave different cells (Kerkis and Caplan 2012). Moreover, Kerkis et al. only screened the deciduous dental pulp cells isolated via the outgrowth method and compared their data (Kerkis et al. 2006) with the ones obtained by the other groups, which does not include the same set of genes (Miura et al. 2003; Pivoriuunas et al. 2010; Yamaza et al. 2010). As a matter of fact, Bakopoulou et al. reported more favorable results for stem cell properties of enzymatic digestion methods of SHED over outgrowth method (Bakopoulou et al. 2011). In conclusion, there is an agreement that almost all DPSC populations show complete or partial overlap in the expression pattern of analyzed markers (Huang et al. 2009; Kerkis and Caplan 2012).
The most significant differences for enzymatic digestion and outgrowth methods are in reported cell number and homogeneity. While the former is always higher in enzymatic digestion, tissue explants allow the expansion of fibroblastic-like cells in dental pulp cultures.
Since there are no identified dental pulp stem cell marker(s), there are continuing efforts for the further purification of isolated dental pulp cells. Yan et al. modified the enzyme digestion method by utilizing a size-sieved protocol in order to get small-sized cell populations containing a high percent of stem cells (Yan et al. 2011). The alternatively developed colony culture method is not only time consuming, but also obtained colonies are not uniform (Gronthos et al. 2000).
The other and commonly used techniques are magnetic and fluorescent activated cell sorting (FACS). While magnetic activated cell sorting seems to be simple and inexpensive, FACS offers high purity and viability. However, electrical charges applied to the cell, resultant semi-sterility, and high cost are the drawbacks of the FACS method (Tirino et al. 2011).
Since the STRO-1 antibody identifies a cell surface antigen expressed by the osteogenic fraction of stromal precursors in human bone marrow, it has been used to select the stromal cell precursor of pericyte cells within dental pulp (Yang et al. 2007). While the STRO-1+ fraction can give cells with both odontogenic and multilineage potential in rat dental pulp (Yang et al. 2007), Shi and Gronthos have shown that STRO-1+ DPSC express vascular antigen CD146, α-smooth muscle actins, and a pericyte-associated antigen (3G5), by immunohistochemistry, FACS, and/or immunomagnetic bead selection (Shi and Gronthos 2003).
Laino et al. showed that c-kit+/CD34+/CD45− DPSC in vitro were capable of woven bone tissue formation (Laino et al. 2005). Even supposing CD34 is a hematopoietic progeny detector, Laino et al. reported that instead of STRO-1, which detects only a 5 % fraction of CD34+ stem cells (Simmons and Torok-Storb 1991), they used CD34+ cells not only because it is a marker for primitive pluripotential stem cells stromal precursors, but also CD34 positivity corresponds to only up to 3 % of the population (Zhan et al. 2004).
Furthermore, Hoechst 3342-sorted SP cells from porcine dental pulp have been shown to possess multipotency for dentinogenesis, chondrogenesis, adipogenesis, and neurogenesis (Iohara et al. 2006). The same group compared the CD31− CD146− and CD31+ CD146− SP cells, and found that the former sub-fractions showed stronger neurogenic potential, while the adipogenic, chondrogenic, and odontogenic differentiation potential was similar in the two sub-fractions of SP cells. Moreover, they have shown the sub-fraction demonstrating CD34+ and vascular endothelial growth factor-2 (VEGFR2)/Flk1+ promoted vasculogenesis in models of mouse hind limb ischemia (Iohara et al. 2008).

Medium can influence the manipulation and culture techniques as well as morphology and differentiation ability of the cells especially for the culture of heterogeneous cell populations that contain cells at various stages of differentiation as in dental pulp. Dental pulp cells are usually cultured in Eagle’s basal medium (EBM), Eagle’s minimum essential medium (MEM), α-MEM, or Dulbecco’s modified Eagle medium (DMEM). A more complex Ham’s F12 nutrient medium (F12) was optimized for cloning. A 1:1 mixture of DMEM and F12 combine the richness of F12 and the higher nutrient concentration of DMEM. These support the expansion of the mesenchymal cells without inducing early senescence and differentiation (Freshney 2005).
It has been shown that various media favor different cell populations in cultures of pulpal cells. While Medium 199 favors fibroblastic cells, MEM and BME support many connective tissue and epithelial cells (Miller et al. 1976). Nakashima found that the DMEM and the DMEM/F-12 mixture led to the best results in adhesion, cell growth, and cell number at confluence when compared with F-12, Roswell Park Memorial Institute medium (RPMI) and Medium 199 (Nakashima 1991). Initially Nakashima concluded that DMEM may be preferred for culturing pulp cells, because the resulting population ratio and labeling index showed that it supported a population of the prominently fibroblastic pulp cells. However, later her group used very complex media for porcine deciduous pulp cultures (Iohara et al. 2008). Even though their enzymatic digestion was not described clearly, the media was EBM2, including growth factors such as basic bFGF, insulin-like growth factor 1 (IGF1), epidermal growth factor (EGF), and VEGF-A. In addition, the optimal concentration of porcine serum was determined to maintain all the sorted cells (Iohara et al. 2008). Although they used DMEM in their consequent studies, the serum ratio was 2 % (Iohara et al. 2008) or 10 % (Ishizaka et al. 2012) and supplements were not indicated.
Lopez-Cazaux et al. showed that while calcium-rich and phosphate-poor medium MEM supported recruitment and/or proliferation of smooth muscle actin positive (SMA+) cells, high-calcium medium RPMI 1640 lowered the SMA+ cells in human dental pulp cultures and the authors reported that MEM was more potent for odontoblast-like cell differentiation than RPMI 1640 (Lopez-Cazaux et al. 2006). Govindasamy et al. cultured dental pulp cells in four different media: DMEM-knock out (DMEM-KO), DMEM low glucose (DMEM-LG), DMEM/F12, and minimum essential medium-alpha (α-MEM), all supplemented with 10 % FBS. They observed that α-MEM and DMEM-KO are the most optimal culture conditions for DPSC in terms of their proliferation, morphology, cell surface marker analysis, and population doubling time. The interesting result from this study is that while cells grown in α-MEM, DMEM-KO, and DMEM/F12 showed differentiation into mesoderm lineages at early passage (P1) and late passage (P9), DPSC cultured under DMEM-LG has been reported to exhibit differentiation defects when the cells were differentiated after passage 5 (Govindasamy et al. 2010).
In our laboratory we use the outgrowth method with DMEM/F12 plus 10% FBS for both SHED and DPSC: starting from their first days in culture, DPSC show the spindle shaped, typical fibroblast-like appearance that is consistent through several passages (over 35) (Fig. 5.1). 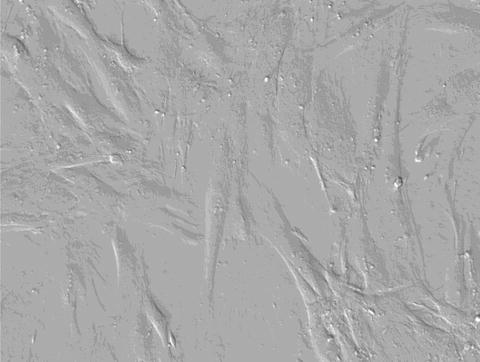 In cell populations isolated and cultured in vitro, the balance in quantity of stem cell and progenitors at the different stages of commitment directly depends on the method of isolation and cell culture conditions. Accordingly, quality and quantity of fetal bovine serum (FBS) added in basal culture medium, use of enzymatic digestion, addition of growth factors, and other changes introduced into the protocol for stem cell isolation can contribute to selection or propagation of different populations of stem cells and/or progenitors (Kerkis and Caplan 2012).

Likewise, amino acid, protein, glucose, and vitamin contents of media might be responsible for different outcomes. Our preliminary data about the effects of albumin on DPSC proliferation showed that albumin has a strong influence on cell morphology (Fig. 5.2).

Fig. 5.2
Only gold members can continue reading. Log In or Register to continue