Inflammatory and Infectious Diseases of the Salivary Glands

13 Inflammatory and Infectious Diseases of the Salivary Glands

Razvan A. Tasca and Ray Clarke

Interventional Radiology and the Salivary Glands

The arrangement of the deep cervical fascia in children follows the pattern in the adult. The submandibular and parotid glands—and the parotid glands in particular—are enclosed in a dense layer of fascia that envelops the glandular parenchymal and ductal tissue. In the parotid, the capsule also encloses the intrasalivary lymphoid tissue. The parotid gland in children is seeded with lymph nodes within and around the acini and ducts, mainly in the superficial lobe. There are no intraglandular lymph nodes in the submandibular and sublingual glands. Parotid enlargement in a child is frequently due not to salivary parenchymal disease but to intraparotid lymphadenopathy, which should always be considered in the differential diagnosis.

Inflammation in the salivary glands leads to swelling and/or pain in the saliva-producing tissues in the upper aero-digestive tract. The typical cause of inflammatory disease is infection, but some noninfective disorders are also characterized by inflammation.

Salivary gland pathological processes are associated with a wide spectrum of etiologies (Table 13.1). Congenital abnormalities, infections and other inflammatory disorders, obstruction, neoplasia, and degenerative disorders occur in children. These are less common and have a different incidence in comparison with the adult population. A large retrospective case review of parotid masses in the pediatric population puts the incidence of inflammatory and infectious lesions at 36.4%.2 Salivary gland infections most commonly affect the major glands and may present as acute, chronic, or acute on chronic. Viral and bacterial pathogens are the most common etiological causes.

Inflammatory salivary gland disease can present in children from birth until adolescence. It commonly affects the major salivary glands—principally the parotid and submandibular. In both cases, it may be difficult to differentiate swelling in the gland parenchyma from swelling in the adjacent lymph nodes, and in the case of the parotid, in the intracapsular lymph nodes. Children may be unable to localize pain. Palpation of the salivary glands is difficult in infants. A baby with bilateral parotid enlargement may wrongly be thought to have “chubby cheeks.” In a child presenting with nonspecific symptoms and signs, such as a pyrexial illness, the head and neck are not always carefully examined, and salivary gland disease may consequently present late.

A good history, a high index of suspicion, and a patient and thorough examination will go a long way to directing the clinician in selecting appropriate investigations.

Palpation of the salivary glands can be difficult in children. Parotomegaly may not be immediately apparent, especially in a newborn baby.

Acute infective salivary gland disease is typically associated with a leukocytosis. Serology can help identify a viral pathogen. If sarcoid is suspected, the serum angiotensin-converting enzyme (ACE) level is usually raised, but this is not specific and confirmatory evidence or a tissue diagnosis is still needed.3

A Mantoux test is appropriate when mycobacterial infections are suspected.

Cultures obtained from the salivary gland orifice or from intraoral saliva can help identify the pathologic organisms and guide in the selection of the appropriate antibiotics.

Fine-needle aspiration cytology (FNAC), also known as aspiration biopsy cytology (ABC), with the help of a suitably trained cytologist can help distinguish inflammatory from neoplastic disease, but has a limited role in children. It is difficult to obtain good samples, interpretation of often equivocal findings is fraught, and most children will need a general anesthetic. Image-guided biopsy using ultrasound or magnetic resonance imaging (MRI) under the supervision of a trained interventional radiologist is used in some centers. 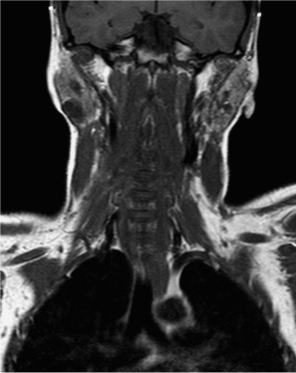 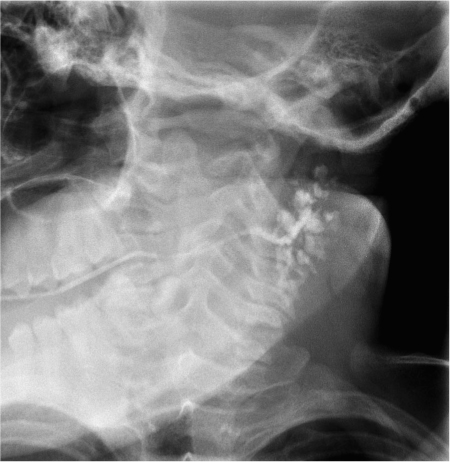 Open biopsy will yield more tissue and allow better study of the acinar architecture, but the risks to neurovascular structures—particularly the facial nerve—and the inevitability of a scar need to be considered.

Plain radiography is still used to detect radiopaque stones, mainly in the submandibular gland and duct.

Ultrasonography is now the first-line imaging investigation for detecting pediatric salivary gland pathology. It can be used to assess the size, character (solid versus cystic and diffuse versus focal) and vascularity of a salivary gland lesion (Fig. 13.1; see also Chapter 6).

Computed tomography (CT) and MRI are increasingly being used to visualize salivary gland lesions (Fig. 13.2). Ideally, the imaging sequence should be planned following discussion with a radiologist who has a special interest in this field.4

Contrast sialography is a more invasive investigation. It involves injection of contrast via a catheter into the appropriate cannulated salivary duct orifice. It should not be used in the acute setting, as it may exacerbate the condition. Because it is uncomfortable and often poorly tolerated in children, it is much less frequently used than in adults. Children may need sedation or even general anesthesia. Contrast may be useful for delineating ectatic ducts in sialectasia and in salivary fistula, particularly if limited surgery is being considered (Fig. 13.3). There are reports of contrast sialography aiding resolution of sialolithiasis and sialadenitis, presumably by dislodging particulate material from the ductal system.5 Overall, as in adults, contrast sialography has been replaced in most indications by MRI sialography (see Chapter 7) or sialendoscopy (see below).

Sialendoscopy (see also Chapters 9 and 15) has recently come into widespread use as a good noninvasive technique for the diagnosis and treatment of obstructive salivary gland disorders in the pediatric population. It has been used in recurrent salivary gland swelling of both the parotid and submandibular glands. Enthusiasts claim it is more sensitive than both ultrasound and MRI. Combined diagnostic and therapeutic sialendoscopy in skilled hands offers a conservative treatment approach, with low morbidity, for sialolithiasis and for juvenile recurrent parotitis. It can also offer the potential for direct administration of drugs into the ductal system.6

The treatment of salivary gland disorders in children will be specific to the condition, but there are some general principles. The capsule of the parotid gland is tense. Acute parotid enlargement can be very painful, and the child therefore needs adequate analgesia. Dehydration in children can be rapid and severe, so if the child does not have an adequate oral intake, early intravenous rehydration must be considered. “Sialogogues” are of limited use, as is parotid massage, but may give some symptomatic relief. Acute pyogenic infection is best treated with antimicrobial therapy, targeting the most likely organisms if cultures are available and depending on local policies. We favor flucloxacillin 25 mg/kg in four divided daily doses for 5–7 days, pending the response or until the results of culture and sensitivity are known. In the case of nontuberculous mycobacteria, macrolide antibiotics, ciprofloxacin, and rifabutin have been used in small, early lesions and following incomplete excision.7–9

Acute abscesses may need surgical drainage, usually under general anesthesia. A single abscess cavity can be drained by needle aspiration with minimal invasion and little risk to the facial nerve. More extensive disease may need an open approach. The facial nerve in children is more superficial than in the adult and will be at particular risk, and there is therefore a need for all surgeons who undertake this sort of work to be appropriately trained and experienced.

Interventional Radiology and the Salivary Glands

An enthusiastic interventional radiologist may be able to cannulate a deep parotid abscess under ultrasound guidance. This can help avoid the extensive scar associated with an open approach to the parotid gland, but the technique has limitations and the child will usually need a general anesthetic, often requiring repeat aspiration.10

Infective sialadenitis can be bacterial or viral. Acute viral infections such as coxsackie A and B, echovirus, influenza A, cytomegalovirus (CMV), and Epstein–Barr virus (EBV) may involve the salivary glands, especially the parotid.

The classical cause of viral parotitis is mumps. Mumps is a common childhood infection caused by a paramyxovirus. The infection is rare before the age of 2 years, mostly occurring in children aged between 4 and 6. It commonly presents with painful unilateral or bilateral swelling of the parotid gland for up to 1 week, but this feature is not present in all cases. The other salivary glands may also become inflamed at the same time, or in isolation.

Salivary gland enlargement is usually preceded by a prodromal syndrome of malaise, fever, loss of appetite, and sore throat lasting up to 3 days. The incubation period is 14–21 days. The contagious period lasts from 2 to 3 days before the development of the salivary gland swelling to ≈ 7 days after its resolution.

On clinical examination, the salivary glands are swollen and tender. The child is often fractious, with fever and trismus. The parotid duct papilla may be swollen and erythematous, but the saliva is clear.

The white cell count may be normal or show mild leukopenia with lymphocytosis. The serum amylase may be elevated in the first week, but it normalizes in the next 2 weeks. Laboratory diagnosis is based on isolation of virus, detection of viral nucleic acid from saliva, or serological confirmation (IgM mumps antibodies).

Mumps is usually a benign childhood illness and recovery is uneventful, but aseptic meningitis and encephalitis and acute pancreatitis are potentially fatal complications. Mumps orchitis can lead to infertility in boys. Mumps is still an important cause of sensorineural deafness, particularly in some parts of the developing world in which vaccination rates are poor.

Treatment is entirely symptomatic and may involve analgesia, antipyretics, sialogogues, and rehydration.

Mumps is vaccine-preventable, with one dose being ≈ 80% effective against the disease. Routine vaccination has proved to be highly effective in reducing the incidence of mumps. Nevertheless, outbreaks are still occurring in the cohort of young adults who are too old to have been vaccinated and too young to have been exposed to natural infections. The United Kingdom underwent a massive epidemic of mumps from 2003 through 2006. Young adults aged 19–23 years were at the highest risk.11

Human immunodeficiency virus (HIV) should be considered in patients with chronic unexplained enlargement of the parotid glands.

Tags: Salivary Gland Disorders and Diseases Diagnosis and Management
Jul 24, 2016 | Posted by mrzezo in Oral and Maxillofacial Surgery | Comments Off on Inflammatory and Infectious Diseases of the Salivary Glands
Premium Wordpress Themes by UFO Themes
WordPress theme by UFO themes