Salivary gland tumors are infrequent and account for less than 3% of all tumors in adults and about 1% of all pediatric tumors.1,2 Most tumors arise in the parotid gland. In the adult population, it can be assumed as a general rule that the smaller the anatomic salivary gland is, the higher the likelihood that the tumor is malignant. In contrast to adults, the larger the gland of origin in children, the more likely it is that a tumor will be malignant.1,2

Pretherapeutic imaging of salivary gland tumors is challenging, due to the great variety of histological types and because of the wide range in differential diagnosis. The exact histological subtype among benign and malignant lesions, as well as local and distant spread at the initial diagnosis, influence not only the prognosis but also therapeutic options. Most salivary gland tumors, whether benign or malignant, present with a painless, palpable mass. Differentiation between benign and malignant tumors is not possible by clinical examination alone in the absence of facial nerve palsy, if there is no fixation of the lesion on palpation or if no enlarged lymph nodes are present. However, preoperative information about whether a salivary gland tumor is benign or malignant may be useful in planning neck dissection, in preventing treatment delay in case of malignancy, and for informing the patient more appropriately about the possible risk of facial nerve injury and about treatment options. As imaging-guided fine-needle aspiration cytology (FNAC; see Chapter 8) may not always be conclusive, especially in deep-seated tumors, imaging is increasingly being used to characterize salivary gland tumors, particularly to detect malignant features and determine the histological subtype if possible. However, the main role of imaging in salivary gland tumors still consists of precisely assessing the local extent, discovering other tumors in the same gland or in the contralateral gland, and assessing locoregional and distant metastases.2–12

This chapter mainly discusses the pretherapeutic imaging work-up and focuses on the characteristic imaging features of malignant tumors, patterns of deep tumor spread, and differential diagnosis. The respective roles of ultrasonography, computed tomography (CT), magnetic resonance imaging (MRI), and positron-emission tomography/CT (PET/CT) are discussed, as well as their performance in the pretherapeutic and post-therapeutic situations.

As already discussed in Chapter 7, ultrasound is the ideal tool for the initial assessment of superficially located tumors of the parotid and submandibular gland. As a noninvasive technique that does not involve radiation exposure, it provides excellent lesion detection, differentiation of solid from cystic masses, relatively accurate depiction of tumor spread, evaluation of the vascular pattern with color Doppler or power Doppler, and reliable assessment of the cervical nodes.5,10,11

If ultrasound-guided fine-needle aspiration cytology (FNAC) reveals a malignant tumor, if cytology is inconclusive, if deep tumor spread is suspected, or if cranial nerve palsy is present, an MRI examination is mandatory to complete the pretherapeutic work-up.3–6 As a general rule, an MRI should also be performed for all lesions arising in the sublingual gland or in the minor salivary glands, as the risk of malignancy is high (70%–85% in the sublingual glands, 49%–80% in the minor salivary glands). In addition, MRI is mandatory in lesions arising in the deep lobe of the parotid gland, because deep lobe parotid gland lesions are partially obscured by the mandible and are therefore incompletely visualized with ultrasound. In institutions in which MRI is not readily available, or whenever MRI is not feasible, CT can be used as an alternative to evaluate invasion of adjacent structures and of the skull base. Both MRI and CT can identify tumor heterogeneity, ill-defined margins, extraglandular extension, and lymph-node metastases. However, CT is inferior to MRI in its soft-tissue differentiation and for detecting bone-marrow infiltration, meningeal involvement, or perineural spread.3,4,6,8

Positron-emission tomography (PET) with fluorine 18 fluorodeoxyglucose (FDG) is well established as a functional imaging tool for diagnostic oncological imaging, yielding metabolic information that is not provided by conventional morphological imaging modalities such as CT and MRI. Current PET/CT scanners combine precise localization of the metabolic abnormalities seen on PET with CT images that have high spatial resolution. PET/CT has been successfully used in the diagnosis, evaluation, and surveillance of malignant disease of the head and neck at many institutions, including our own.13–15 There are currently many protocols in which whole-body PET/CT is used routinely in the overall algorithm for head and neck cancer management. The few data that exist on PET/CT in salivary gland tumors suggest that it may be superior to CT and/or MRI for staging salivary gland malignancies at the initial presentation.15 It has even been suggested that PET/CT may have a major impact on patient management in as many as 35% of patients.15 Due to the paucity of published data in the literature, the current use of PET/CT in salivary gland tumors is limited to a few institutions. Nevertheless, it appears appropriate to use PET/CT at least in high-grade carcinomas, which have an increased risk for distant metastases, or whenever histological analysis cannot differentiate metastasis to the parotid gland from a primary tumor of the parotid gland itself.

Ultrasound with FNAC is used as a first-line approach in imaging primary salivary gland tumors. MRI is required when FNAC confirms malignancy, after inconclusive FNAC, in tumors arising in the sublingual gland and deep lobe of the parotid gland, when there is suspected deep spread, and when there is cranial nerve impairment. CT plays only a minor role. Whole-body PET/CT is useful for detecting distant metastases.

Owing to the tissue changes caused by surgery, with or without additional radiotherapy, ultrasound is less accurate for detecting local recurrences in the post-therapeutic period than in the pretherapeutic situation. Fibrosis and edema typically result in subcutaneous, glandular, and muscular alterations in tissue echogenicity and detection of recurrent lymph-node metastases may be impaired. In radiation-induced sialadenitis, pathological parenchymal changes with variable unpredictable echogenicity and heterogeneous vascularization patterns typically make it impossible to detect smaller recurrent salivary gland tumors.2–5 In addition, the results of FNAC may be less good than in the nonirradiated neck, as the number of nondiagnostic probes is higher. MRI, CT or PET/CT are consequently now used to detect recurrences and for presurgical assessment of the extent of the tumor.

In general, CT is inferior to MRI and PET/CT for assessing recurrent tumors, and a few studies have suggested that PET/CT may even have superior sensitivity for detecting recurrent salivary gland malignancies in comparison with MRI.15 Nevertheless, it appears that although the sensitivity of PET/CT for detecting recurrent tumors may approach 100%, the corresponding specificity is poor due to post-therapeutic inflammatory changes, which may persist for years.13–15 However, these initial observations have yet to be confirmed in larger series.

MRI, CT, and PET/CT are used to detect locoregional recurrences and distant metastases, although the specificity of these methods may be impaired by post-therapeutic changes.

A malignant salivary gland tumor typically shows an ill-defined border with a heterogeneous, mostly solid architecture, areas of necrosis, and cystic changes (Fig. 28.1). Although most authors report hypervascularity on color Doppler images,4,5,10 tumor hypovascularity is not infrequent. Posterior acoustic shadowing, similar to that seen in pleomorphic adenoma, may also be observed with some malignant tumors and should not be considered as indicative of a benign histology. Local invasion may be seen in the subcutaneous tissues and skin.

Malignant lymph nodes are identified on ultrasound by their rounded shape, the heterogeneity of their echo structure, abnormal, disorganized vascularity with or without internal necrosis, cystic changes, abnormal hilum, and extracapsular spread. Deep tissue extension, extension into the surrounding muscles, perineural spread, and vascular and bony invasion cannot be evaluated on ultrasound (Fig. 28.2). 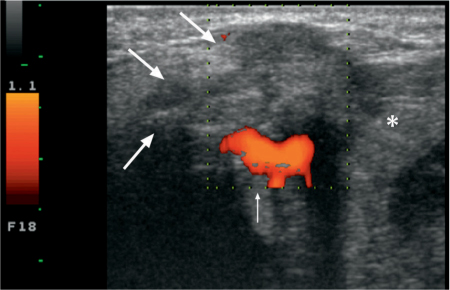 Fig. 28.1 Characteristic ultrasound features of a malignant tumor of the submandibular gland (asterisk). The inhomogeneous echogenicity, with poorly defined margins and subcutaneous infiltration (arrows) and focally increased vascularization (thin arrow) should be noted. The final diagnosis was basal cell adenocarcinoma.

The advantages and disadvantages of CT, as well as the standard routine protocol recommended for imaging of salivary glands, are described in Chapter 7. As indicated at the beginning of this chapter, CT can be used as an alternative to MRI whenever MRI is not available or not feasible.2–9 Contrast-enhanced CT scans often result in increased conspicuity of various salivary gland tumors, making them relatively easy to detect. However, salivary gland tumors—particularly mucoepidermoid carcinoma, adenoid cystic carcinoma, and acinic cell carcinoma—may at times not demonstrate significant contrast enhancement on CT images, and the lesion may be overlooked or its extent may be grossly underestimated.

For most malignant tumors, CT is capable of identifying tumor heterogeneity due to necrosis or bleeding, ill-defined margins, muscular extension, invasion of the subcutaneous fat and skin, invasion of the mandible or skull base, invasion of vascular structures, and lymph-node metastases. In advanced disease, CT may also detect extensive meningeal involvement or major perineural spread. Lymph-node metastases are identified on CT by their rounded shape, the presence of central nodal necrosis, the increased nodal size with a minimum axial diameter larger than 1 cm, inhomogeneous enhancement, and extracapsular spread. CT of the chest and abdomen can also be used to detect distant metastases effectively. With the rapidity of current CT scanners, the entire area from the skull base to the pelvis can nowadays be imaged in less than 20 seconds. 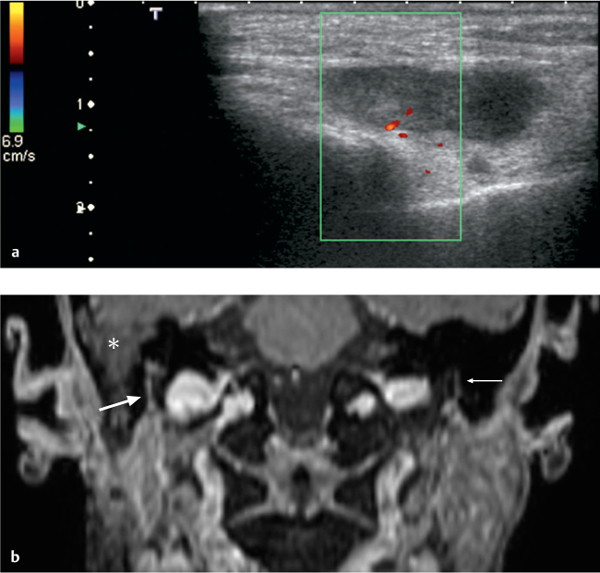 Fig. 28.2 a, b Adenocarcinoma of the superficial lobe of the parotid gland, with perineural spread along the facial nerve. The patient did not have facial nerve palsy clinically.
a The ultrasound examination shows an inhomogeneous tumor with solid and necrotic areas, with relatively well-defined margins and without increased vascularization.
b Coronal reconstruction of a three-dimensional contrast-enhanced T1-weighted gradient echo (GRE) sequence with a slice thickness of 0.9 mm, performed in the same patient, shows subtle enlargement and enhancement of the right facial nerve in the stylomastoid canal (thick arrow). Histology confirmed perineural spread. The normal left facial nerve (thin arrow) should be noted for comparison. There is some fluid retention in the mastoid air cells (asterisk)

The CT features of malignant tumors include heterogeneous architecture, ill-defined margins, invasion of skin, subcutaneous tissue, muscle, bone, and dura, and perineural spread. Lymph-node metastases and distant metastases can be assessed in the same examination.

Tumor heterogeneity has been observed both in benign tumors (Warthin tumors and pleomorphic adenomas) and in malignant tumors (mucoepidermoid carcinoma) and corresponds histologically to areas of hemorrhage, necrosis, or fibrosis.18–20 Although heterogeneity is seen more often in malignant than in benign tumors, it is not a useful criterion for distinguishing between the two. Tumor infiltration into deep structures (e.g., the parapharyngeal space, muscles, and bone) is seen only with malignant tumors18 (Figs. 28.4, 28.5, 28.7). However, this is an imaging sign that may be seen only in advanced disease. As malignant tumors, especially when small, may not display any of the MRI features described above, it may often be impossible to differentiate between benign and malignant salivary gland tumors using standard sequences. Developing new MR sequences and new imaging criteria to distinguish between benign and malignant tumors is therefore one of the major goals in ongoing research today. 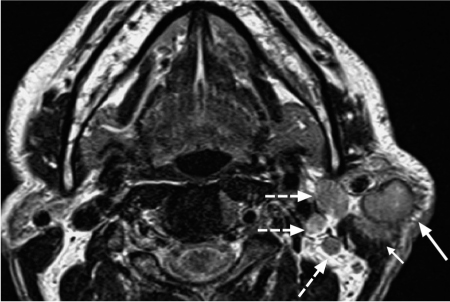 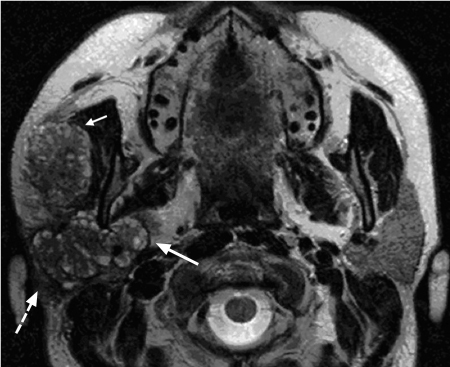 Fig. 28.4 Adenoid cystic carcinoma of the right parotid gland, with characteristic magnetic resonance signs: invasion of the superficial lobe (dashed arrow) and deep lobe of the parotid gland (arrow), and invasion of the masseter muscle (short arrow). The ascending ramus of the mandible is not invaded. The “grapelike” appearance of the tumor on this T2-weighted image, which is typical for the cribriform subtype, should be noted.