In the event of severe OSAHS, a hyoid expansion and hyo-mandibular suspension procedure is performed. These surgical methods enhance the anterior superior repositioning of the tongue base, enlarge the pharyngeal airway in a lateral dimension and partially separate the tongue base from the lower airway by an infrahyoid myotomy. Hyoid expansion and hyo-mandibular suspension/myotomy may be performed in conjunction with or following transoral or transcervical tongue suspension.

The anterior neck is prepped and draped. The anterior mandible, hyoid and the thyroid cartilages are then outlined with a skin marker with the neck slightly extended. Lidocaine with epinephrine 1:100,000 is injected into the planned incision sites. Two 0.5 cm incisions are made under the chin off the midline and using blunt dissection, the soft tissues overlying the mandible are cleaned. After insertion of the first screw using the Repose device (Influent, Concord, NH), the screw inserter is loaded with a new spare screw and the inserter is positioned perpendicular to the mandible, firm pressure applied and the screw is inserted into the inferior edge of the mandible. A loop of #1 polypropylene suture is already preloaded to the screw by the manufacturer (Fig. 51.1). 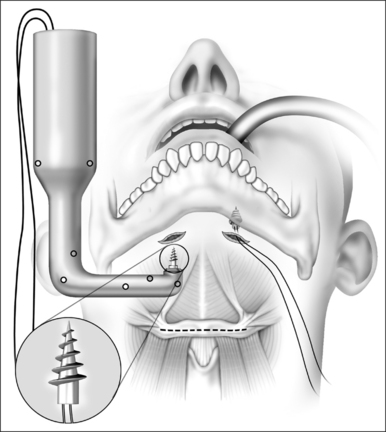 Fig. 51.1 Insertion of two Repose screws to the mental area of the mandible via stab incision. Insert shows details of the screw with preloaded suture.

A second horizontal incision is made over the body of the hyoid measuring 5–6 cm. Subcutaneous fatty adipose tissue can be dissected and removed. Electrocautery is used to separate the infrahyoid muscles from the body of the hyoid bone. A single bone hook is placed to retract and stabilize the hyoid during the dissection. The sternohyoid and thyrohyoid muscles are detached from the body of the hyoid between the lesser cornuae (Fig. 51.2). Careful dissection around the body of the hyoid eliminates risk of injury to the neurovascular structures. Careful dissection and good hemostasis are mandatory to avoid injury to the pre-epiglottic fat pad. The suture passer is then loaded with the polypropylene suture and tunneled at the subplatysma layer from the mandibular incisions into the lower (hyoid) incision (Fig. 51.3). The suture passer is then removed. One free end of the polypropylene suture is then loaded into a Mayo needle and is passed through the suprahyoid muscles, catching a full thickness bite of the tissue. 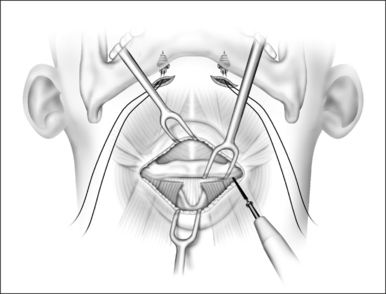 Fig. 51.2 Horizontal incision exposing the body of the hyoid, separation of infrahyoid muscle with electrocautery. 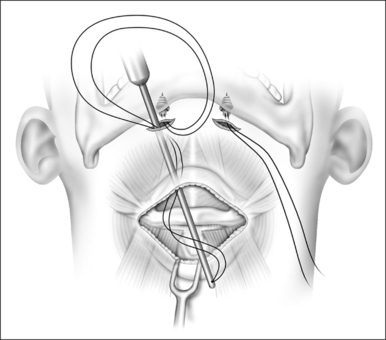 Fig. 51.3 Delivery of sutures to the lower incision with a suture passer.

When the hypopharyngeal airway needs to be enlarged in a lateral direction, as determined by preoperative fiberoptic endoscopy, the hyoid bone is then divided in the midline (hyoid distraction) (Fig. 51.4). Following the division of the hyoid bone the polypropylene suture is passed around both sides of the divided edges in a figure of eight configuration (Fig. 51.5). The distracted hyoid segments are then prepared for suspension toward the mandible. In order to maintain stability of the two hyoid segments an absorbable or non-absorbable rigid or semirigid implant can be placed to keep the two ends of the divided hyoid in expansion (hyoid expansion) (“>Fig. 51.6). 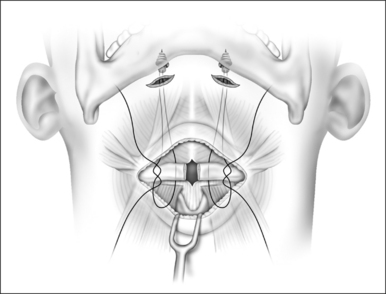