Lateral pharyngoplasty, first described by Cahali,1 was aimed at addressing lateral pharyngeal wall collapse in patients with OSA. The procedure showed promising results; however, many patients had prolonged dysphagia postoperatively.

The ideal procedure would involve one that is easy to perform, with low morbidity, minimal complications and not requiring any special equipment.

Orticochea6 first described the construction of a dynamic muscle sphincter, by isolating the palatopharyngeus muscle and transposing it bilaterally, superiorly in the midline, for treatment of velopharyngeal incompetence in patients with cleft palates. Christel et al.7 modified Orticochea’s procedure, by isolating the palatopharyngeus muscle bilaterally, apposing it more superiorly and closing the lateral pharyngeal defects with Z-plasty sutures. Utilizing these procedures, the authors present an innovative technique in creating this tension in the lateral pharyngeal walls, preventing its collapse and reducing the number of apneic episodes. The expansion sphincter pharyngoplasty basically consists of a tonsillectomy, expansion pharyngoplasty, and rotation of the palato­pharyngeus muscle, a partial uvulectomy and closure of the anterior and posterior tonsillar pillars.

The authors conducted a prospective randomized clinical trial in 45 adults, age above 18 years old, who have mainly type I Fujita (retropalatal obstruction) and lateral pharyngeal wall collapse. The inclusion criteria included patients with small tonsils (tonsil size 1 and 2), Body Mass Index (BMI) < 30, and Friedman clinical stage II and III who had failed or cannot tolerate nasal continuous positive airway pressure (CPAP) therapy. The clinical examination included height, weight, neck circumference, BMI, and assessment of the nasal cavity, posterior nasal space, oropharyngeal area, soft palatal redundancy, uvula size and thickness, tonsillar size and Friedman tongue position. Flexible nasoendoscopy was performed for all patients, and collapse during a Mueller’s maneuver was graded for the soft palate, lateral pharyngeal walls and base of tongue on a five-point scale.3 These patients were randomized into either the traditional uvulopalatopharyngoplasty (UPPP) procedure or the expansion sphincter pharyngoplasty (ESP). The mean follow-up time was 6.5 months. All patients had a postoperative polysomnogram at 6 months.

The procedure is done under general anesthesia, with the patient in the supine position. The authors perform the procedure with orotracheal intubation, and a Boyle–Davis mouth gag within the oral cavity keeping the mouth open, and isolating the endotracheal tube forwards. A bilateral tonsillectomy is performed (Fig. 37.1). The palatopharyngeus muscle is identified; its inferior end is transected horizontally (Fig. 37.2). The muscle is isolated and left with its posterior surface partially attached to the posterior horizontal superior pharyngeal constrictor muscles (Fig. 37.3). It is rotated superolaterally with a figure 8 suture, through the muscle bulk itself, with a Vicryl 3/0 round body needle. A superolateral incision is made on the anterior pillar arch bilaterally, identifying the arching fibers of the palatoglossus muscles (Fig. 37.4). The palatopharyngeus muscle is then attached to the arching fibers of the soft palate anteriorly and a partial uvulectomy is then performed (Fig. 37.5). The anterior and posterior tonsillar pillars are then apposed with Vicryl sutures (Fig. 37.6). The same steps are repeated on the opposite side. This new technique of expansion sphincter pharyngoplasty was modified from the Orticochea procedure and lateral pharyngoplasty. The principle of this technique is to isolate the palatopharyngeus muscle (the main part of the lateral pharyngeal wall bulk) and rotate this muscle supero-anterolaterally, in order to create the lateral wall tension and remove the bulk of the lateral pharyngeal walls. The key is to not completely isolate the muscle into a tube and rotate it, but rather to keep part of its fibrous attachment to the superior pharyngeal constrictor muscle, so as to create the necessary tension and pull supero-anterolaterally. A complete or partial uvulectomy is performed together with this procedure. 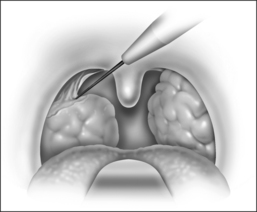