(1)
Canberra, ACT, Australia
Summary
Severe odontogenic infections in endodontics can be a serious potentially life-threatening illness that can, on many occasions, respond favourably to appropriate management. Delayed or inappropriate treatment may result in sepsis or airway embarrassment requiring a surgical airway (tracheostomy), inotropic support and close monitoring, on an intensive care unit. The anatomical basis of the spread of these infections and techniques relevant to their management will be discussed.
Clinical Relevance
Endodontic infections arising locally from an infected tooth can potentially spread along the route of least resistance along fascial planes extensively and are rapidly potentially becoming fatal. Prompt pharmacological and surgical interventions including incision and drainage procedures are discussed in an attempt to control the spread of infection. The general dentist should be aware of the potential sites of spread based on anatomy and the relevant rationale for management including referral to hospital when indicated.

6.1 Overview of Infections of Endodontic Origin and Management Thereof

The pathogenesis of endodontic disease has been attributed to inflammation of the dental pulp (pulpitis) from bacteria and their metabolites, which ultimately colonise the entire root canal system affecting the peri-radicular tissues (apical periodontitis) [1–3].
Controlling an endodontic infection is dependent on the host defence system, occasional systemic antibiotics (when indicated), chemo-mechanical instrumentation, locally used inter-appointment intra-medicaments, root canal filling and coronal restoration of the tooth [4]. In untreated teeth or inappropriately and ineffectively managed previously root-filled teeth, a unique combination of oral obligate anaerobic and facultative anaerobic bacteria may continue to induce inflammation around the root apex [5–7]. Host inflammatory mediators, produced by macrophages and lymphocytes, will recruit and activate osteoclasts resulting in peri-radicular bone loss that can be histologically classified as apical granuloma, abscess or cyst. Interaction between host immune defence and virulent organisms will result in undisturbed periods followed by exacerbation and acute pain when the balance is tipped in favour of the bacteria [8]. On occasion pus may accumulate as a result of the apical focus proceeding to abscess formation culminating in localised swelling, pain and redness (the cardinal inflammatory signs). The risk of spreading infection is along the path of least resistance dictated by bone and periosteum, muscle and fascia by way of haematogenous dissemination, lymphogenous dissemination or direct extension into fascial spaces. If perforation of the cortical bone exists, drainage into the oral cavity, usually through a fistula, provokes a marked reduction in symptoms. In some instances the infection may spread to neighbouring regions such as the maxillary sinus; sublingual, submandibular and infraorbital regions; or orbit and brain and even to the parapharyngeal space resulting in a descending necrotising mediastinitis (Table 6.1 and Fig. 6.1) [9–12].
Table 6.1
Anatomical spaces involved in the spread of maxillofacial infections
Note: S superior, L lateral, M medial, I inferior, AL anterolateral, P posterior 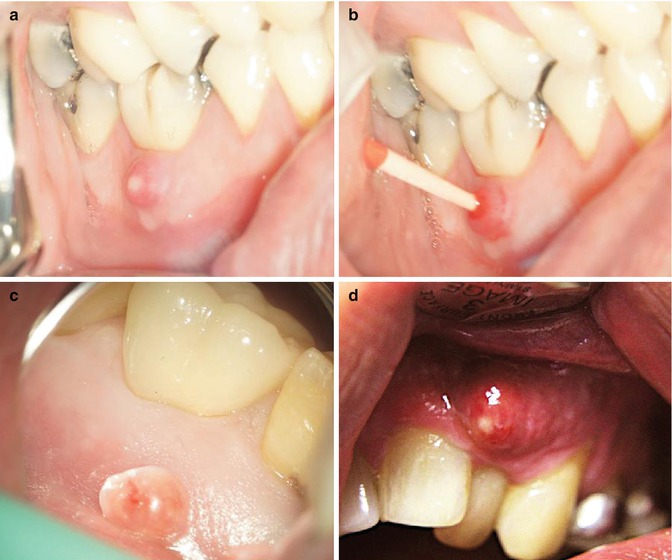 Fig. 6.1
Clinical photographs demonstrating (a) draining sinus in relation to tooth 46, (b) a gutta-percha placed into the sinus to confirm radiographically the source of infection, (c) a long-standing parulis and (d) a fluctuant abscess overlying tooth 22 with pus exudate
Direct extension of infection along the fascial planes is the most common route for spread of odontogenic infections if drainage of the accumulating pus and exudate does not occur. Fascial planes enfold and buttress visceral (vessels, nerves and glands), muscular and bony structures forming planes of least resistance that can form anatomical spaces. These potential anatomical spaces are created when blood, gas, inflammatory exudate, exogenous fluids or surgical exploration dissects the fascial plane. Dissemination of infection is dictated by the morphology of tooth root involved, the extent of the lesion, the anatomy of the alveolus and the location of surrounding muscular and fascial attachments [9–12].
Haematogenous spread of odontogenic infections can lead to serious and life-threatening complications such as septic cavernous thrombosis, orbital cellulitis and cerebral abscess [13–15].
The principal management of severe odontogenic infections is to establish drainage of the pus with concomitant appropriate antibiotic therapy and pain management. Where conservative management has failed to resolve the problem, it would be in the best interests of the patient to consider immediate referral to a specialist oral maxillofacial surgeon with possible admission and inpatient intravenous antibiotics, surgical intervention and possible extraction of the involved tooth. Ultimately serious airway obstruction can result in potential death of patients with severe uncontrolled spreading infections as in the case of life-threatening conditions such as Ludwig’s angina [16–22].

Most odontogenic infections are a sequel to pulp necrosis resulting in an inflammatory process at the peri-apex of the tooth. If left untreated, the inflammatory process can result in either facial cellulitis (defined as an acute and oedematous spread of an inflammatory process through the facial planes of the soft tissues) or an abscess (collection of pus).
Established pus may form a fistulous pathway eroding through the cancellous alveolar bone, perforating the cortical plate and periosteum and spreading into the surrounding soft tissues eventually discharging into the mouth with suppuration. The spread of odontogenic infections is dictated primarily by the thickness of overlying bone and location of the infected tooth in relation to muscle attachments as well as host defences taking the least path of resistance. Infections of endodontic origin often present as intra-oral pustules or rarely extra-oral, small, elevated, circumscribed, suppuration-containing lesions of either the skin or oral mucosa. Placing a gutta-percha cone into the overlying fistula tract and taking an intra-oral radiograph will often establish the source of the established pathway confirming the diagnosis (Fig. 6.2). 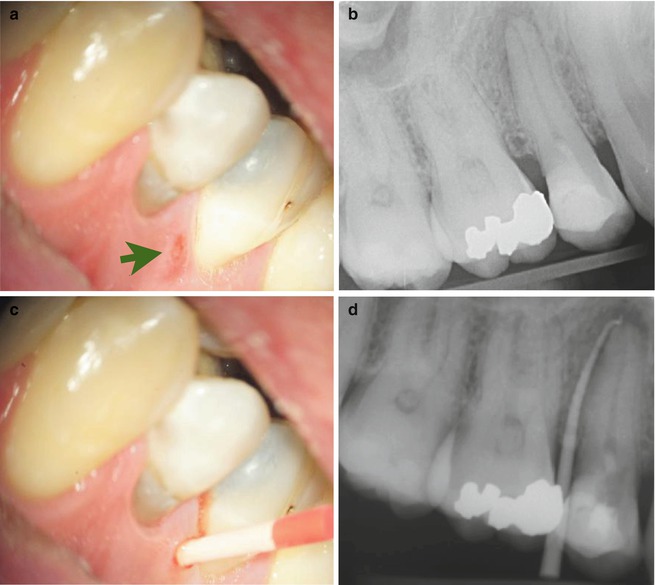 Fig. 6.2
Clinical photographs and radiographs demonstrating (a) draining cutaneous fistula in relation to tooth 15 (green arrow), (b) preoperative film demonstrating peri-apical lesion in relation to 15, (c) gutta-percha placed in sinus tract and (d) gutta-percha sinus tracing radiograph confirming tooth 15 is responsible for draining sinus
Cellulitis of the face and neck will result in pain, tenderness and redness and diffuse oedema of the soft tissue spaces causing a large firm swelling with accompanying pyrexia, regional lymph node enlargement and possible spasm of adjacent muscles and trismus. Infections will spread either locally along fascial spaces or by lymphatics to regional lymph nodes and rarely by the bloodstream (haematogenous) leading to thrombophlebitis, bacteraemia or septicaemia. The fascial spaces most commonly affected include the sublingual, submandibular, pterygomandibular and buccal spaces. Others such as the temporal, masseteric, parotid, lateral pharyngeal and retropharyngeal spaces are less frequently involved (Figs. 6.3 and 6.4). 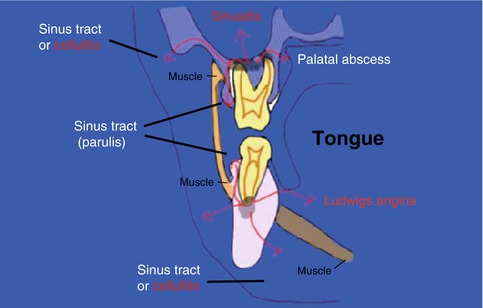 Fig. 6.3
Diagrammatic representation of possible pathways of infection arising from maxillary and mandibular molars. The most common and least dangerous path is for the infection to tract through the gingivae or mucosa (sinus tract)

Fig. 6.4
Diagram highlighting the potential tissue spaces around the posterior mandible
Only gold members can continue reading. Log In or Register to continue