(1)
Canberra, ACT, Australia
Summary
Patients are often apprehensive when undergoing root canal treatment and pain is often taken as synonymous with these procedures. Pain management involves correct diagnosis, appropriate dental treatment and adjunctive drug therapy where indicated. Endodontic pain will be of inflammatory origin and nonsteroidal anti-inflammatory drugs are the preferred choice for relief. Paracetamol provides effective analgesia with limited anti-inflammatory action. Effective pain management strategies are discussed for pre-, peri- and post-operative endodontic procedures.
Clinical Relevance
Effective pain management is a critical skill in order to attain patient satisfaction and trust when undergoing invasive root canal treatments. From a patients’ point of view, this aspect of treatment is often judged as more important than the challenging clinical practice of root canal itself. Several methods of pain relief are discussed, based on scientific evidence that will aim to provide adequate relief for patients experiencing pain and avoiding preconceived misconceptions that can be avoided by the use of modern pharmacology.

15.1 Overview of Analgesics, Anaesthetics, Anxiolytics and Glucocorticosteroids Used in Endodontics

Pain relief as a result of endodontic intervention alone is rarely immediate but nevertheless the most effective strategy to reduce posttreatment pain. Posttreatment pain ranging from mild to severe may last up to 72 h in some cases requiring additional posttreatment analgesics. Several pharmacological strategies are available for ensuring effective pain management when treating the endodontic pain patient. When prescribing analgesics, patients should be instructed to take the medications at regular timely intervals (e.g. 6–8 hourly) ensuring that a more consistent blood level of the drug is achieved contributing to better pain relief. The two most common analgesics that can be prescribed include NSAIDs and paracetamol either separately or in combination. The decision to co-prescribe is based on the additive analgesic effect when these two drugs are taken together which is usually well tolerated by most patients when given over a short period of time. There may however be contraindications in the medical history that dictates which analgesics may best be tolerated altering the drug regime of choice.
The mechanism of action of most NSAIDs is believed to involve the inhibition of the cyclooxygenase enzyme (COX), thereby inhibiting the synthesis of prostaglandins. Pulpal inflammation and necrosis can lead to peri-radicular tissue injury that can activate phospholipase, which, in turn, releases arachidonic acid from cell membranes. The arachidonic acid in turn forms the substrate for the COX enzymes, which lead to the synthesis of various eicosanoids. Two COX isoforms exist, namely, COX-1 and COX-2. COX-1 is responsible for the production of prostaglandins with homeostatic functions in tissues such as the stomach, kidney and platelets, whilst COX-2 is responsible for the production of the prostaglandins involved in inflammation. The therapeutic effects of NSAIDs are attributable to the inhibition of COX-2.
Some patients may not be able to tolerate NSAIDs since inhibition of normal prostaglandin synthesis results in a number of adverse effects. These might include patients with gastrointestinal disorders (ulcers and ulcerative colitis), hypertension (including antihypertensive drug interactions or the renal effects of NSAIDs) and active asthmatics. For those patients who cannot tolerate NSAIDs, pretreatment with paracetamol is recommended.

The use and efficacy of topical anaesthesia prior to needle insertion and injection of local anaesthesia has been highly variable. Nevertheless, its use is recommended prior to all intra-oral dental anaesthesia techniques to rest assure the patient that the clinician is trying everything possible to minimise any pain during treatment. Topical anaesthetic gel formulations should be placed over the mucosa at least 30 s to 1 min before the injection (see Fig. 15.1). 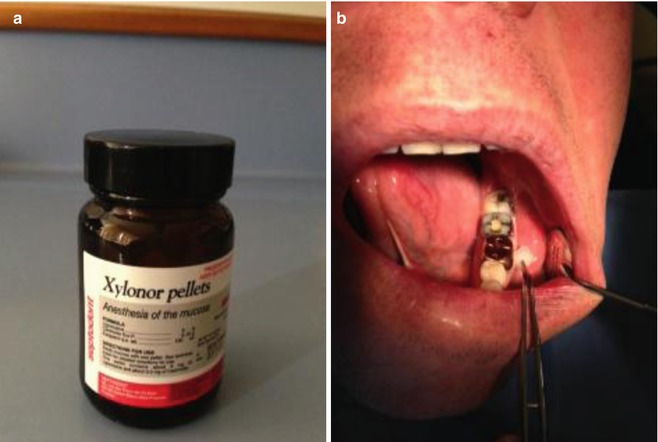 The pulpal sensory fibres of the maxillary teeth are primarily carried in the anterior, middle and posterior superior alveolar nerves, which also supply the buccal soft tissues. Most problems with maxillary anaesthesia can be attributed to individual variances of normal anatomical nerve pathways within the maxillary bone with accessory pulpal innervation fibres found in the palatal innervation supplied by the nasopalatine and greater palatine nerves. The administration of palatal anaesthesia is often described as a painful experience by the patient, and direct palatal infiltration is difficult to administer without significant pain or discomfort since there is little tissue space at these sites between the mucosa and the underlying. Using careful application of topical anaesthesia, distraction techniques and ensuring slow delivery of anaesthetic solution should allow for very little to no patient discomfort. Alternative injections using articaine in the buccal vestibule alone may prove sufficient, avoiding the palatal injection. New computer-controlled anaesthetic delivery systems (CCLAD) are particularly proficient at eliminating or at the very least minimising discomfort when giving injections in the palate.
Nasopalatine nerve block
Palatal anterior superior alveolar nerve block (PASA)
The needle is placed just lateral to the incisive papilla (Fig. 15.2). Once the needle has penetrated the mucosa, initial deposition of anaesthetic solution is injected over 10 s. Following this the needle is reoriented more vertically to enter the nasopalatine canal a distance of 0.5–1 cm. Following negative aspiration, the remaining solution within the cartridge is deposited. The injection will provide anaesthesia of all six maxillary anterior teeth (canine to canine) with a single injection including soft tissue overlying the anterior palate (nasopalatine nerve distribution) and to a lesser extent the labial gingivae.

Fig. 15.2
(a, b) Clinical photographs and diagrams demonstrating the nasopalatine block injection. The entrance to the nasopalatine foramen is at the incisive papilla, which may be visualised posterior to the maxillary central incisors. The needle tip should contact the soft tissue at the lateral aspect of the incisive papilla with a depth of penetration of less than 5 mm. After aspiration anaesthetic solution should be deposited at a very slow rate to minimise discomfort for the patient
Greater palatine nerve block
Only gold members can continue reading. Log In or Register to continue