Fig. 11.1
X-ray diffraction profiles of self-setting apatite cement bulk powder (AP) and self-setting apatite/collagen composite cement (AC)
Scanning electron microscopy (SEM) and electron probe microanalyzer (EPMA) were performed to characterize element dispensability in the AC [7]. The SEM of AC without grinding showed a rough surface and large particles (more than 20 μm particles in diameter), indicating that the cement was a heterogeneous system. In contrast, AC with grinding showed a smooth surface consisting of particles less than 1–2 μm in diameter.
The natural bone had a smooth surface with cracks. The result of mapping of calcium by EPMA suggested that there are calcium rich and less part in the AC without grinding (Fig. 11.2a). The calcium ion distribution in the AC (Fig. 11.2b) was more homogeneous than that in the AC without grinding, and the calcium ion homogeneity was almost the same as that of natural bone (Fig. 11.2c). These results indicated that AC without grinding had a heterogeneous structure in which collagen and calcium phosphates were not mixed uniformly. On the other hand, calcium and phosphates were dispersed homogeneously at the nanoscale in the cement as well as in the natural bone.

Fig. 11.2
Effects of grinding on element dispersibility of the AC by electron probe microanalyzer
The result indicated that the raw materials of the apatite cement, such as DCPC and TECP, were micronized by mechanical energy during grinding in the vibration mill and distributed into collagen matrices. Then, the micronized DCPD and TECP dissolved and recrystallized to nanoparticle apatite on collagen matrices. Since apatite formation of cement was catalyzed on collagen matrices, almost 100 % of calcium phosphate might be transformed to apatite.

AC cements were implanted into the backs of rats and the density measured using bone mineral densitometry. Microradiograms of the AP and AC (Fig. 11.3) were measured by dual energy X-ray absorptiometry after implant in the rats, and the cement mineral content (BMC) was evaluated based on the microradiograms. The BMC of the implanted cements decreased with time, indicating that the cement was gradually bioabsorbed. Bioabsorption rates of the implanted cements (Fig. 11.4a) were dependent on the quality of cement (cement formulation). The BMCs of both of the AC and AP decrease over time, and the BMC of the AC was found to be significantly lower than that of the AP. 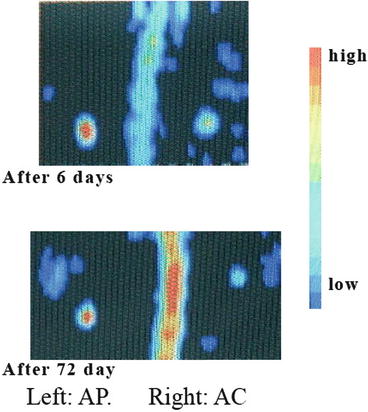 Fig. 11.3
Microradiogram of implanted AP and AC cements in rats by DEXA

Fig. 11.4
Effects of cement formulation on the BMC of AP and AC cements by DEXA
The effect of grinding on the BMC of the implanted cements (Fig. 11.4b) revealed the concentration of BMC decreases over time regardless of whether grinding was performed. The concentration of BMC in AC without grinding was always found to be lower than that of the AC.
The results of the AP and AC suggested that the biodegradation rate was dependent on the cement quality and geometrical structure, and the rate can be shown as AP < AC < AC without grinding. The biodegradation rate of the AP was found to be the slowest as it is composed entirely of pure inorganic material. On the contrary, by having a nanoscale heterogeneous structure consisting of 80 % apatite and 20 % collagen, the AC without grinding had the highest biodegradation rate (Fig. 11.2a, d). The decreasing BMC behavior of the AC was found to be between those of the AP and the AC without grinding. This is mainly due to a decrease in the particle size of the cement and bone-like cells penetrating into the cement after implantation.
Figure 11.5 shows the micrographs of the cross section of the demineralized sample cement blocks after 72 days of implantation in soft tissue. The AP (Fig. 11.5a) kept its original diameter (6 mm) in soft tissues after implantation. A slight reduction in thickness was also observed as the organic components have penetrated into the cement. The data from the in vivo experiment showed shrinkage in the diameter of AC by approximately 30 %, while an increase in thickness was recorded (Fig. 11.5b). In contrast, AC without grinding (data not shown) was totally absorbed and no traces of the cement were discovered in the soft tissues. 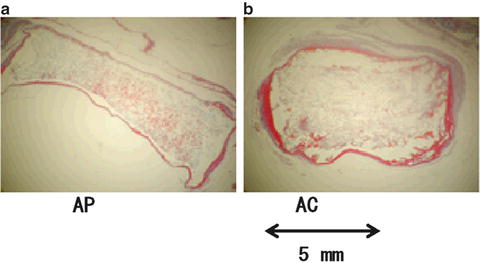 Fig. 11.5
Cross-section micrographs of (a) AP and (b) AC cements after 72 days of implantation
These results indicated that the BMC changes and their bioaffinity were significantly dependent on the quality of apatite and the nano-geometrical structure in the cement. The biodegradation rate of the AC could be controlled by the cement formulation and the geometrical structure.

In order to develop bone regenerative artificial bone systems, it is necessary that bone growth factors are loaded in bioactive artificial bone matrices and slowly releases through time. Shiraki et al. [9] reported that metacarpal bone mineral density was increased in osteoporosis through the administration of menatetrenone, vitamin K2 (VK2, anti-osteoporosis drug). They indicated that VK2 prevented trabecular bone loss and the occurrence of bone fractures [10] in osteoporosis. Therefore, the VK2 is selected as a model drug and loaded in the bone cement matrices to develop a drug delivery system.

11.3.1 Therapeutic Effect of Drug Delivery System of the AC on Bone Mass in the Rats

Apatite/collagen composite cements loaded with bone growth factors is believed to have a better biocompatibility than simple artificial bone implants. The effects of anti-osteoporosis drug on bone mass were investigated in the osteoporosis rats. The AC cement bulk powder was prepared by grinding 80 % AP with 20 % collagen for 20 min. After that, the bulk powder (0.500 g) of the AP or AC was mixed homogeneously with 0.20 mL of 11 mM phosphoric acid, then 10 mg of VK2 powders were mixed, and the final paste was poured into a plastic mold and stored at 37 °C and 100 % relative humidity for 24 h. Three types of the drug delivery devices were developed [7]:
1.
APK – VK2 loaded in the AP
2.
ACPK – VK2 loaded in the AC without grinding
3.
ACGK – VK2 loaded in the AC with grinding
After the VK2-loaded devices were implanted in the osteoporosis rats, the BMC was measured as index of biodegradation rate. Figure 11.6 shows the effects of VK2 on BMC of apatite/collagen cements implanted in osteoporosis rats. The BMC profile of the ACGK was significantly higher than those of the ACPK and APK. On the other hand, the microstructure of ACGK was significantly different from APK, and that difference was drastically affected by the duration of the experimental. For ACGK, the amount of BMC reached its peak at day 7. ACPK and APK recorded the highest and slowest degradation rates of BMC, respectively. At day 21, the amount of BMC present can be shown as ACGK > APK > ACPK.

Fig. 11.6
Effects of cement formulation on BMC of AP and AC cements containing VK2
The micrographs of the cross sections of the apatite/collagen cements containing VK2 taken after 72 days of implantation were shown in Fig. 11.7. After implantation, it was discovered that the APK cement had undergone deformation but there are no evidence to suggest penetration of organic components into the cement material (Fig. 11.7a). Likewise for the ACPK cement with a reduction in diameter but an increase in thickness, the shape of the ACGK cement had been completely distorted after 72 days (Fig. 11.7b). 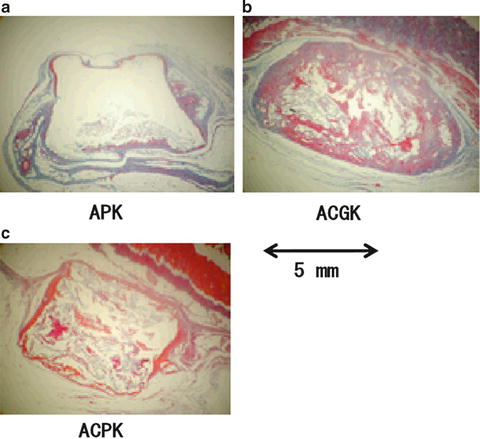 Fig. 11.7
Cross-section micrographs of (a) APK, (b) ACGK, and (c) ACPK cement after 72 days of implantation
The BMC result of the cements loaded with VK2 suggests that their formulation has a significant effect on the rate of biodegradation. After 72 days, the ACGK cement recorded an increase in BMC, which was also higher than the ACPK cement (Fig. 11.6). The organic components had penetrated deeply into the center of the ACGK (Fig. 11.7b). These results suggested that the changes in BMC were more dynamic for the ACGK than the ACPK cement. As shown in the X-ray diffraction results, grinding the apatite/collagen composite cement can lead to a crystalline structure that is more or less the same as natural bone; this could have an influence on the release of bone growth factors such as VK2 and the regeneration and absorption of bone during the experimental period.
The BMC profile of AC suggests the quick release of VK2 may encourage organic components to penetrate the ACPK cement and stimulate the activity of the surrounding cells. Observations made from the ACPK micrographs revealed organic components had penetrated into the cement and causing the shape the cement to totally deform. On the other hand, a complete absorption of AC was observed.
Only gold members can continue reading. Log In or Register to continue