Marine Structures as Templates for Biomaterials

It has already been shown that coral and marine sponge skeletons can support self-sustaining musculoskeletal tissues and that extracts of spongin collagen and nacre seashell organic matrices promote bone mineralisation. Use of ready-made organic and inorganic marine skeletons is one of the simplest potential remedies to major problems hindering the future development of regenerative orthopaedics such as providing a richness of framework designs and now a potentially rich, accessible source of osteopromotive analogues and biomineralisation proteins. This should not be surprising given that the pivotal biomineralisation proteins, which orchestrate bone morphogenesis, are also found in the earliest calcifying marine organisms. In support of this notion, it has emerged that BMP molecules— the main cluster of bone growth factors for human bone morphogenesis—are secreted by endodermal cells into the developing skeleton. In addition, the regenerative signalling proteins are also present in early marine sponge development and instrumental to stem cell activation in Cnidarians. Based on this match between vertebrate and invertebrate main developmental proteins, we have published the nature and extent of this evolutionary relatedness and use it to support the development of a new strategy, which is to my selected marine origin organic matrices for novel metabolic signalling and structural proteins/peptides and protein analogues to apply in regenerative orthopaedics, particularly when using adult stem cells [9, 38]. To support this we showed the early-stage evidence gathered in our own laboratory the presence of fibrinogen fragments and early osteopromotive effects of a coral organic matrix extract on stem cells [39]. In practice the discovery of new osteopromotive and osteo-accelerant protein analogues will require the use of traditional chromatography techniques, osteoactivity assays to hone in on potential proteins of significance and advanced proteomic tools to provide accurate sequencing, determine the mechanisms and molecular pathways involved in osteoactivation and determine the efficiency and effectiveness of marine skeleton-derived protein modulation of the stem cell (MSC) proteome. As more analogues are discovered using proteomic tools, skeletal organic matrices may have ever-increasing utility for regenerative orthopaedics [9].

Marine sponges possess the most primitive form of extant tissue but share much in common with multicellular tissues which have apparently conserved many features evolved by these first multicellular organisms [40]. Morphological and biochemical similarities exist between marine sponge and vertebrate extracellular matrix (ECM) alluding to fundamental rules of organisation evolved first by marine sponges. Three collagen types have so far been identified from marine sponge. All sponges are composed of 22 nm thin collagen fibrils with highly ordered periodic banding. Although the collagen ultrastructure is relatively simple compared to vertebrate collagens, amino acid sequences and genome organisation are similar. Collagen fibrils are secreted in bundles in a similar manner to vertebrates. Similarly collagen fibrils are closely associated with proteoglycans which, in mammalian tissue blueprint, shape and form at long range scales. Fibronectin, dermatopontin and tenascin polypeptides are also found in marine sponge collagen fibres and cross-react with antibodies raised against vertebrate analogues highlighting their common origins. Some sponge species possess an analogue of type IV collagen found in vertebrate basement membrane collagens [41]. The organisation of collagen fibrils is analogous to collagen type XIII which sticks cells to surfaces. It is with these properties (fibronectin and cell adherent collagens) that collagenous marine sponges represent a significant potential for future development as bioactive tissue engineering scaffolds.
At present, marine sponges are extensively exploited for novel biological compounds as potential treatments for cancer tumours, leukaemia and inflammation. Marine sponges are also a source of collagen for cosmetics [40] and dermatological preparations [42]. In total 50 % of all marine-derived materials are sourced from a wide spectrum of marine sponges. Collagenous marine sponge skeletons are incredibly soft, strong, highly absorbent and elastic, resistant to high temperatures and bacterial attack. Such properties make them highly suited for surgical procedures. The exact conditions to grow marine sponges at a large enough scale for commerce are being investigated by a number of researchers. Some have established aquatic pilot farms for the cultivation of selected bath sponge species. Marine sponges are sufficiently adaptable for commercial scale production. Another aim for cultivating marine sponges is to extract medically important secondary metabolites in much larger quantities than is possible from collections made by conventional bio-prospecting. The superior optimised structural design of silica marine sponges has been alluded to and which provides useful lessons for construction of man-made frameworks with minimal starting materials for maximum strength [43, 44]. They reported on the structural properties of biosilica observed in the hexactinellid sponge Euplectella sp. Consolidated, nanometre-scaled silica spheres are arranged in well-defined microscopic concentric rings glued together by organic matrix to form laminated spicules. The assembly of these spicules into bundles, effected by the laminated silica-based cement, results in the formation of a macroscopic cylindrical lattice-like structure reinforced by diagonal ridges. It can be added that there is, therefore, considerable mechanical benefit to specific arrangements of structural elements at many different hierarchies of scale (Fig. 13.2).

Sea urchin skeletal plates are punctured by a very regular series of pores. Approximately three quarters of the pores are exits for tube feet (200 μm pore diameters at the spine bases to 600 μm pore diameters for the tube feet in Centrostephanus nitidus), while the remainder are channels connected to the reproductive and alimentary systems and are very much larger to accommodate larger throughputs of fluid (1,000–2,000 μm pore diameter). Hydrothermal processing of echinoderm structures transforms the chemical and mechanical properties with equivalence to human bone. Echinoderm skeletons are constructed from a unique, intricately shaped, 3D, single crystalline meshwork with a topological structure in which every internal pore and channel is in direct contact with all others (periodic minimal surface). This property is likely to facilitate mass transfer and tissue development [46]. Studies using the replamine form technique for replicating perforate echinoderm structural elements generate promising hard tissue replacements to bone, as well as candidate prostheses for blood vessels and trachea. In this context the skeletal ossicles from the sea star (Pisaster giganteus) have been investigated. They provide an ideal architecture together with physical and chemical properties conducive to bone restoration [15].
The sea urchin spicule is a composite of organic and inorganic materials that the animal synthesises using the most readily available elements in seawater. The fully formed spicule is composed of a single crystal with an unusual morphology in 3D. It has no facets and forms a starlike shape. To achieve such unusual morphologies, sea urchin and other marine organisms deposit a disordered amorphous mineral phase first and then let it slowly transform into a crystal with neatly aligned into a lattice with a specific and regular orientation while maintaining their general morphology. This is a unique transformation from amorphous to ordered crystalline structure—at room temperature—that needs to be clearly observed and understood for directional growth in future biomaterials. The sea urchin spicule is formed inside a clump of specialised cells and begins as the animal lays down a single crystal of calcite, from which the rest of the spicule is formed (Fig. 13.3). Starting from the crystalline centre, three arms extend at 120° from each other. The three radii are initially 40–100 nm-sized amorphous calcium carbonate but slowly convert to calcite. Mechanism as yet not clearly understood but might be through ordered precipitation and growth mechanism at known crystallographic orientations of calcite or aragonite.

Fig. 13.3
Sea urchin structure showing the arrangements of the spikes: (a) general overall structure, (b) cross section of a single spike (spicule), and (c) enlarged spicule surface
Similar transformation from amorphous structure to crystalline form can be observed in a sol–gel-developed hydroxyapatite where the amorphous hydroxyapatite transforms to crystalline nanoplatelets by a thermally activated process (Fig. 13.4) without any large morphological change. In order to simulate the amorphous to crystalline transformation, we have developed a novel method to produce single-phase, nano-sized, platelike, mixed A–B type carbonate-containing apatite (CAH) similar to bone apatite for effective bone tissue integration [47]. The methodology emulates biomineralisation, where topotactic transition from OCP to HAp. 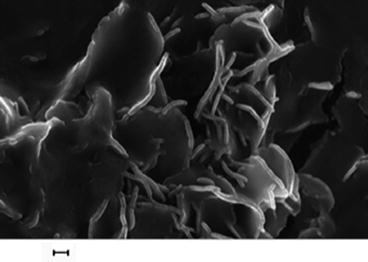 Fig. 13.4
Pseudo-platelike structure of amorphous (sol–gel-developed) calcium phosphate that transforms to fully crystalline plate nano-hydroxyapatite above 300 °C (scale 200 nm)
The synthetic process developed involves formation of thin (1–1.4 nm) layered calcium phosphonate by a self-assembly process. At the early stages, the phosphonate-derived apatite shows slightly curved platelike-shaped amorphous apatite which converts to crystalline form with significant changes to both a- and c-axes as function of temperature. The thermal decomposition of these layered amorphous structures leads to formation of highly crystalline well-organised platelike carbonated apatite [47, 48]. The overall carbonate content varies from 4 to 6.4 wt%, within the temperature range of 500–700 °C. This carbonate content corresponds well with the amount found in mammalian hard tissues.
Although sea urchin transformation is carried out at ambient temperatures, this analogue transition in sol–gel-derived synthetic HAp shows a platelike morphological change of amorphous but near platelike-shaped apatite to perfectly crystalline platelike apatite with thermal activation from room temperature to 300 °C (Fig. 13.4).

Natural coral exoskeletons have been used widely as a bone replacement in orthopaedic, maxillofacial, dental and neurosurgery owing to their combination of good mechanical properties, open and interconnected porosity and ability to form chemical bonds with bone and soft tissues in vivo [49, 50]. Infect corals have the best mechanical properties of the porous calcium-based ceramics and resorb at a rate equivalent to host bone formation (Fig. 13.5). 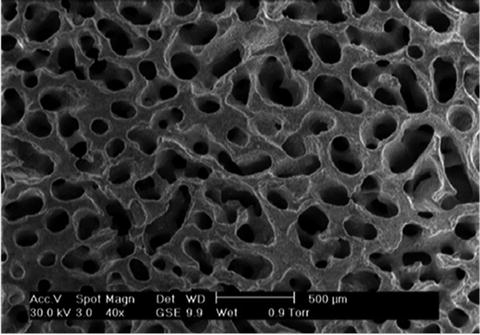 Fig. 13.5
Coralline apatite converted by hydrothermal process showing interconnected porous structure
The beginning of the coral life cycle starts with the polyps which absorbs the calcium ions and carbonic acid present in the seawater to produce the calcium carbonate in the form of aragonite crystals. The remaining composition consists of trace elements of magnesium, strontium, fluorine and phosphorus in the phosphate form [51]. Once implanted in the human body, these elements play a critical role in the bone mineralisation process and in the activation of key enzymes associated with bone remodelling cells. Strontium has been shown to contribute to the mineralisation process by stimulating osteoblasts while inhibiting osteoclasts [52]. Similarly, fluorine helps bone formation through similar stimulatory effect on osteoblast proliferation. Magnesium is also long known to be beneficial in bone remodelling as it has been shown to increase the mechanical properties of newly formed bone [53].
The organic composition has an important part to play in coral biocompatibility. The abundance, conformation and composition of the organic matrices are responsible for successful biological integration of natural coral with human host [38
Only gold members can continue reading. Log In or Register to continue