Cone beam computed tomography (CBCT) is most suitable for the imaging of bony structures, like the mandible and the maxillary bones. However, soft tissue differentiation is impossible because the quantum of radiation applied is insufficient to distinguish between the different soft tissue structures.

The anatomical structures in any desired plane may be viewed on a CBCT scan. Reconstructed images are usually displayed in the coronal, sagittal and axial planes (Fig 5-1).

The anatomy of the maxilla and palatine bone

Two maxillary bones, one left and one right, form the maxilla and the central portion of the facial skeleton. All facial bones except the mandible articulate with the maxilla. Sutures connect the different bone structures and should be distinguished from possible fracture lines on CBCT scans. The left and right palatine processes of the maxillary bones are fused at the median palatine suture (Fig 5-2). The horizontal plate of the palatine bone is located posterior to the palatine processes and is fused by the transverse palatine suture. Together they form the hard palate, the bony roof of the oral cavity.

Immediately inferior to the nose, the two maxillary bones meet and form the anterior nasal spine at their junction (Fig 5-4). This pronounced cephalometric landmark is located above and anterior to the maxillary incisors. It is clearly seen in a sagittal reconstruction.

Posterior to the roof tip of the incisor teeth is the incisive foramen. It is a funnel-shaped radiolucency in the median palatine structure (Fig 5-5). The orifices of the left and right incisive canals are located in this opening. The incisive canals run in a vertical direction parallel to the buccal surface of the anterior maxilla. They contain the terminal branch of the descending palatine artery and the nasopalatine nerve.

When united, the posterior border of the left and right palatine bones at the median palatine structure form the posterior nasal spine—a sharp, pointed process located distally from the maxillary molar teeth (Figs 5-4 and 5-5).

The frontal processes of the maxillary bones extend superiorly to the frontal bone, forming part of the lateral aspects of the bridge of the nose. This feature cannot be distinguished in a small field of view (FOV) CBCT scan of the dentoalveolar area and is therefore not described further.

The regions that flank the nasal cavity laterally contain the medial border of the maxillary sinuses. The latter extend from the orbits to the maxillary teeth. The maxillary bones articulate laterally with the zygomatic bones and their zygomatic processes (Fig 5-7). 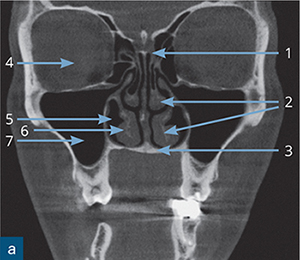 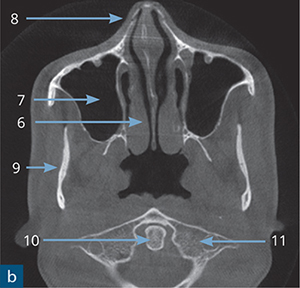 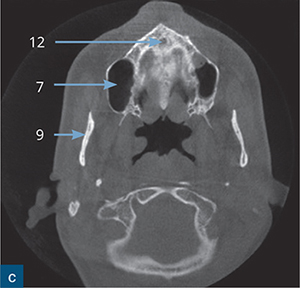 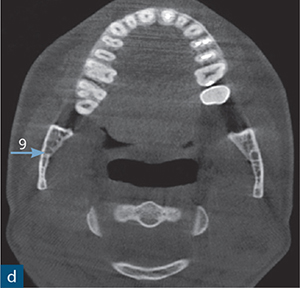 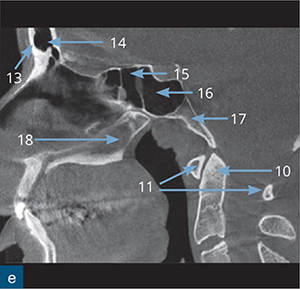 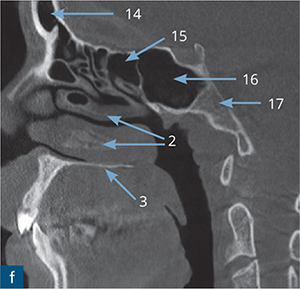 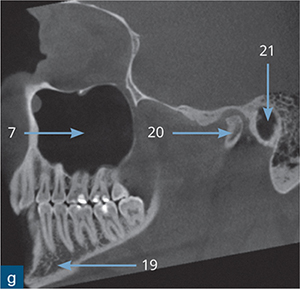 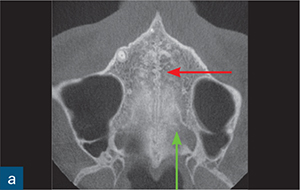 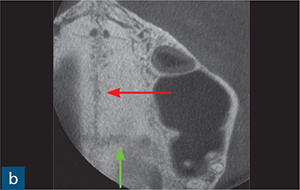 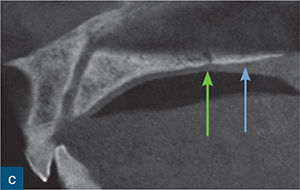 Fig 5-2 Overview of palatal structures: (a to b) axial, (c) sagittal views. The right and left palatine processes are fused and form the median palatine suture (red arrow). These processes are either irregular radiopaque lines, separated by a radiolucent line, or can have a radiolucent appearance only. The green arrow shows the transverse palatine suture. The blue arrow points at the horizontal plate of the palatine bone. 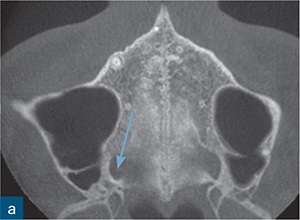 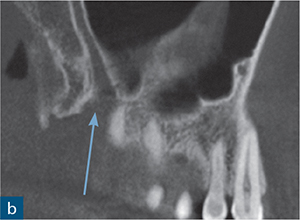 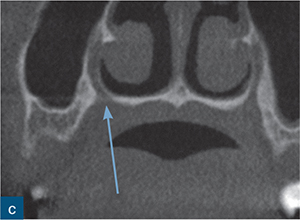 Fig 5-3 Overview of the maxilla: (a) axial, (b) sagittal, (c) coronal views. The blue arrow reveals the foramen of the major palatine canal. 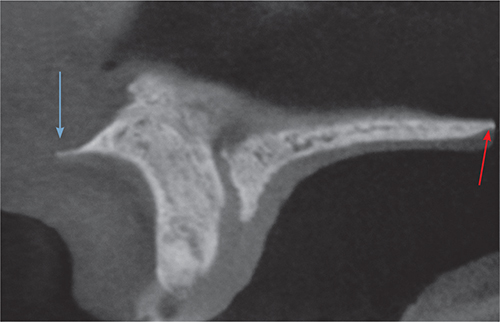 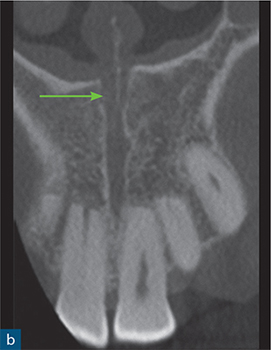 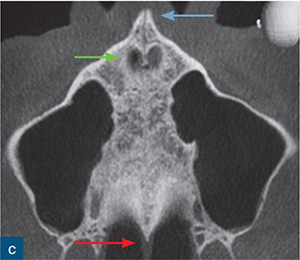 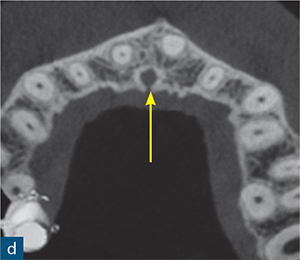 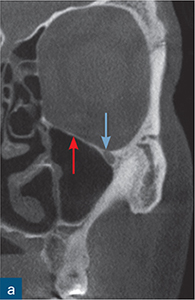 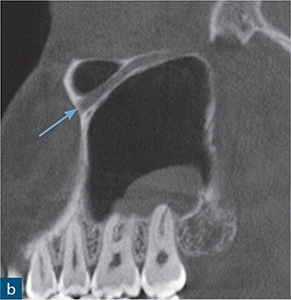 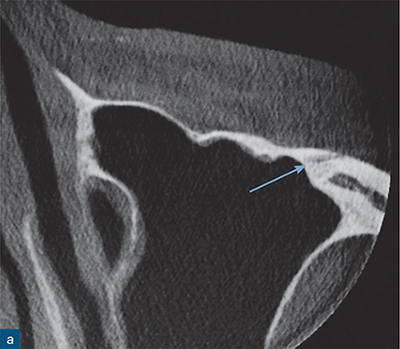 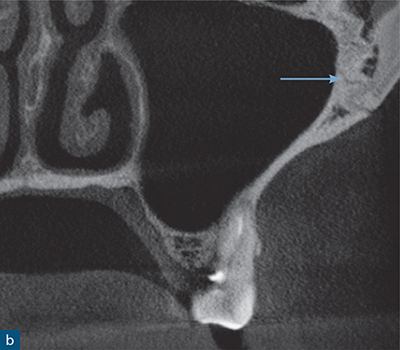 Fig 5-7 (a) Axial, (b) coronal views. The blue arrow points at the radiolucent line that demonstrates the connection between the zygomatic process of the maxillary bone and the zygomatic arch.

The anatomy of the nose and nasal cavity

The nose consists mostly of cartilage, which is not clearly seen on a CBCT scan. The bony part of the nose consists of two thin, rectangular nasal bones fused medially, forming the nasal bridge. They vary in size and form, articulating with the frontal bone superiorly, the maxillary bones laterally, and the ethmoid bone posteriorly (Fig 5-8).

The ethmoid bone forms the roof of the nasal cavity. The palatine processes of the maxillary and palatine bones form the floor. The superior and middle conchae of the ethmoid bone, the perpendicular plates of the palatine bone, and the inferior nasal conchae shape the lateral walls. The depressions of the conchae on the lateral walls are the superior, middle, and inferior meatuses. The nasal conchae form a long, narrow and curled bone shelf that protrudes into the breathing passage of the nose. The airways are clearly visible on a CBCT scan as black radiolucent structures (Fig 5-9).

The nasal septum divides the nasal cavity into right and left sections. The vomer is the bony inferior part of the septum. The superior, less-dense part is formed by the perpendicular plate of the ethmoid bone (Fig 5-10). 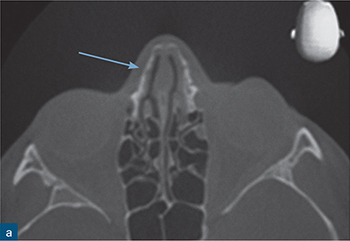 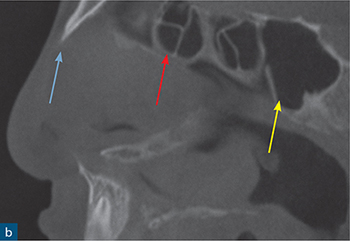 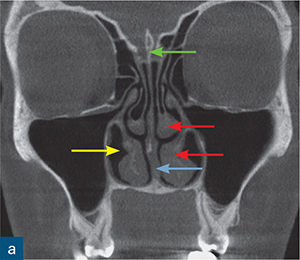 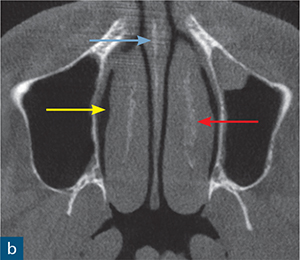 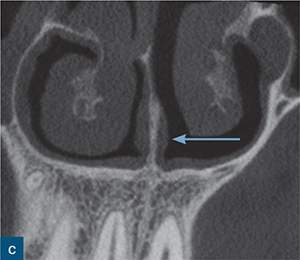