One of the goals of dentistry has always been to have tooth-colored restorative material at its disposal, especially for restoring anterior teeth. During the first half of the 20th century, only various cements were available, particularly so-called silicate cement. At this time, one also believed that the low pH value of silicate cements led to pulp damage over the course of time. Therefore, one tried to eliminate the effect of the acid by placing a calcium hydroxide liner. 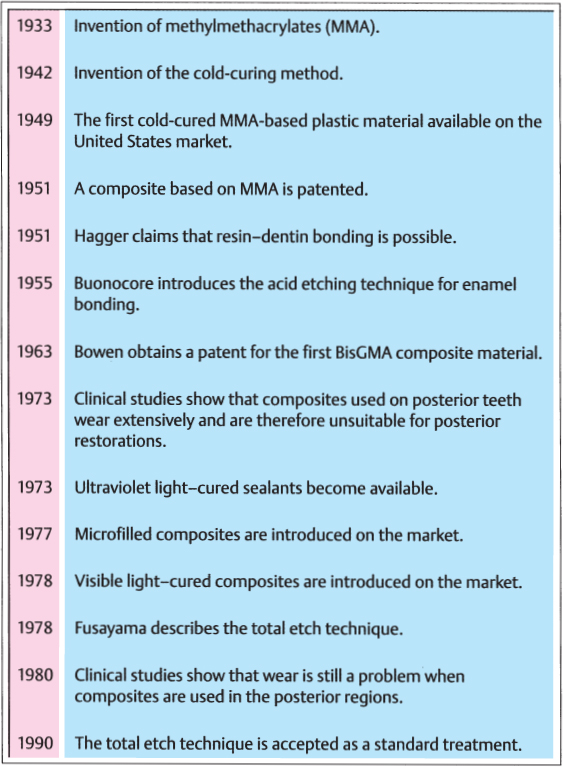 Chronological summary of the development of new composite materials in dentistry

The matrix of a composite consists of several chemical components, of which resin is the most important. Other chemicals contribute to the initiation of the polymerization process, but they also prevent the resin from spontaneously polymerizing during storage. In addition, the matrix also contains components that improve the aesthetic qualities of the composite.

Resin systems used for restorations in dentistry are primarily based on methyl methacrylate (MMA) technology. This technology was first applied in dentistry in the 1940s. Problems such as low wear resistance, marginal leakage, and a tendency to discoloration were the reasons why this technology was further developed, resulting in improved materials. In 1951, Al2O3 filler particles were, for the first time, mixed with methyl methacrylate resin in order to reduce the polymerization shrinkage of the resin-based restorative material. Unfortunately, these materials did not fulfill all expectations.

The blue atoms are carbon atoms, the red ones oxygen atoms, and the gray ones hydrogen atoms. The red bonds represent carbon double bonds. Those that are at the end of the molecule react during polymerization.

As a substitute for MMA, a resin based on epoxy was tested. However, because the epoxy resin tested did not cure well in a moist environment, it was not suitable for clinical use. To solve the problem, Bowen (1963) joined each end of a bisphenol-A molecule with a glycidyl methacrylate molecule. This synthesis made it possible to utilize both the reliable hardening mechanism of methyl methacrylate and the rigidity of the bisphenol-A molecule. Another advantage of the monomer molecule, named BisGMA, was that it had two separate methacrylate groups at each end of the molecule which formed a cross-linked structure during polymerization. The BisGMA molecule is also bigger than the MMA molecule. Because the BisGMA molecule is substantially larger in size, the number of double bonds per milliliter BisGMA monomer is lower than that of MMA. The reduced number of double bonds per milliliter results in a smaller polymerization shrinkage of the BisGMA-based resin than of the MMA-based resin.

The benzene rings stiffen the middle part of the molecule, while the OH groups form hydrogen bridges with OH groups of adjacent BisGMA molecules. Because of these features, the BisGMA monomer becomes a highly viscous monomer. The high viscosity delays the sedimentation of the filler particles, but at the same time it decreases the amount of filler that can be incorporated into the monomer. Since the addition of filler particles increases the viscosity of the resin even further, mixing it with a low viscous monomer must reduce the viscosity of the BisGMA monomer. One monomer that is frequently used for this purpose is triethylene glycoldimethacrylate (TEGDMA).

The TEGDMA molecule also has a methacrylate group at each end of the molecule and can therefore cross-link. It consists of a flexible chain and has no OH groups. The high flexibility of the TEGDMA molecule reduces its viscosity and increases the likelihood of its double bonds being able to rotate and find another methyl methacrylate group to react with during polymerization. The higher double bond density of TEGDMA per milliliter and its greater ability to participate in the polymerization process result in more pronounced shrinkage, but also in improved mechanical properties of the BisGMA/TEGDMA matrix. By diluting the matrix with TEGDMA, there is an increased risk that filler sedimentation may occur as the monomer becomes less viscous. Increasing the filler fraction, which will also decrease the polymerization shrinkage, can increase the viscosity of the composite. The addition of more filler essentially improves the properties of the composite. 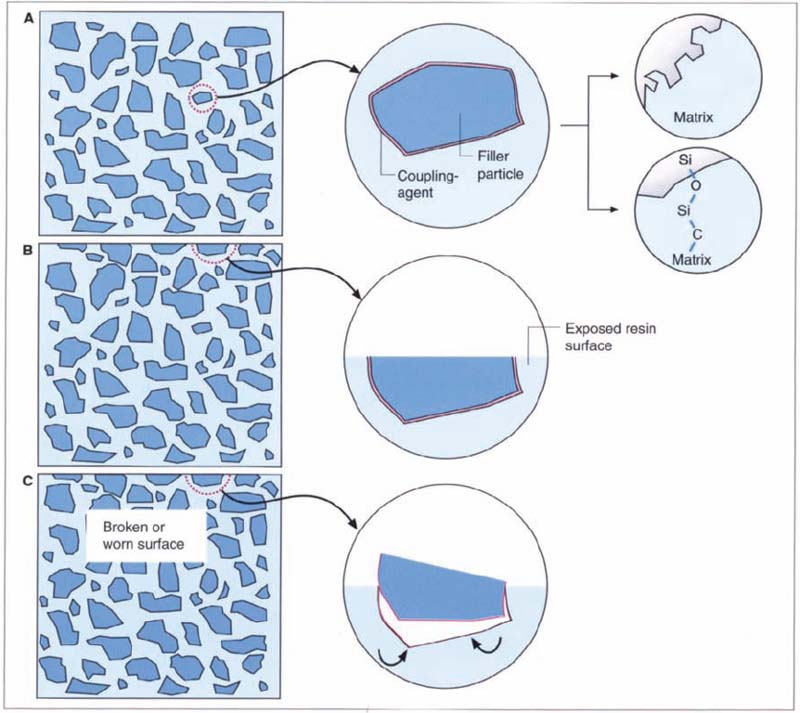 170 Schematic overview of the resin system

B During finishing and polishing the silane layer is removed from the exposed filler surface.

C The filler particles can become dislodged from the surface of the composite during chewing.

Composites can consist of two pastes which, when mixed together, start the polymerization process. The two pastes contain silane-treated filler particles and the monomer system. One of the pastes contains the activator, frequently a tertiary amine, the other paste the initiator, such as benzoyl peroxide. When mixed together, the tertiary amine interacts with the benzoyl peroxide and causes the latter to split and form two free radicals. Each split molecule segment has a highly reactive single electron (free radical) that is able to pair with an electron of another molecule. By bringing such a free radical closer to a methyl methacrylate molecule, the free radical attracts one of the four electrons present in the C=C double bond, which results in a transformation of the C=C double bond into a C-O bond between the two reacting components (Fig. 171). The remaining unpaired electron, present at the other C atom of the double bond, forms a new free radical that can attack another methyl methacrylate double bond in the same way as the free radical of the split benzoyl molecule attacked the first C=C double bond. When this occurs the chain of molecules starts growing. Accordingly, after initiation this polymerization process can, at least theoretically, continue until all double bonds have been consumed and a single large polymethyl methacrylate molecule has formed.

A tertiary amine and heat can activate benzoyl peroxide by splitting it into two free radicals at the central oxygen atoms (initiators). The initiator and its unpaired electron break the C=C double bond of the MMA and form a new C-O bond between the initiator and the MMA molecule. During this reaction a new unpaired electron forms a free radical that can react with another MMA monomer molecule. A chain polymer starts forming.

The biggest disadvantage of chemically cured composites is that they must be mixed, and consequently when they are mixed air bubbles are trapped. Thus, the quality of the final product depends on the mixing technique. Another disadvantage is that the reaction starts the moment the two components mixed. Thus, the reaction has already started when the cavity is filled with the composite, making it almost impossible for the filler material mixed to be of a consistent quality.

Activation begins when a photosensitive chemical (e.g., camphoroquinone) absorbs radiation of a specific wavelength. The keton group of the camphoroquinone molecule is activated by light of a 468 nm wavelength. It subsequently reacts with another component present in the monomer (e.g., dimethylaminoethyl-methacrylat). An H atom is transferred from the dimethylaminoethyl-methacrylate to the oxygen of the light-activated keton group, which changes into a hydroxy group.

172 Light curing with the help of camphoroquinone

The remaining electron of the dimethylaminoethyl-methacrylate molecule (free radical) as well as the free radical left on the camphoroquinone starts the polymerization. The formation of free radicals in light-curable composites takes place more quickly than in cold curing materials. Light exposure can be delayed until the filler material has been inserted and shaped. Consequently, the dentist has better control of the curing process when using light-curable composites.

Free radicals form spontaneously in all composites during storage. To prevent spontaneous polymerization, the monomer contains small quantities of an inhibitor. The inhibitor reacts with free radicals and neutralizes them as soon as they have been formed. Therefore, the chain only grows following depletion of all inhibitor molecules. The processing time of composites can be controlled very accurately by the concentration of the inhibitor present in the monomer.

Various hydroquinones are frequently used as inhibitors. Oxygen is another inhibitor, transferred from the air surrounding the composite. Oxygen inhibition certainly has its advantages in specific situations. It allows a new composite layer to be added on a recently cured composite surface and excellent bonding between the two layers when the new layer is light-cured.

Chemical components such as ultraviolet light absorbers, different pigments, and opaquers are added to the matrix in small quantities to improve the aesthetic property of composites.

Compounds such as 2-hydroxy-methoxybenzophenone, 2-(2′-hydroxy-5′-methylphenyl) benzotriazole and phenyl salicylate are ultraviolet light absorbers which absorb ultraviolet light that could otherwise cause changes in the color of the resin. To give the material a particular color, inorganic pigments are added to the composite. The pigments are usually metal oxides. Certain fluorescent agents (usually rare earth metal compounds) are added in order to give the material a natural-looking, tooth-like structure. In some cases, it is necessary to prevent the color of the remaining tooth structure from shining through the composite. Traumatized teeth, for example, can be strongly discolored and the discoloration can be seen through the composite. In such cases, the composite must be opaque to prevent the dark color from shining through. To achieve this, metal oxides such as titanium oxide are added to the composite.

If a ray of light Interacts with the composite surface, some of the light may be partly reflected and some partly refracted. The density of the filler determines how strongly the light is scattered within the material. The low filler proportion regions (A and B) show lower scattering than a denser filler region C.

Darker pigments absorb more light, which means that when darker shades are used, thinner layers of the light-curing composite must be placed to secure a complete cure. The same is true if opaquers are used, because they prevent the light from penetrating deeply into the composite.

The refraction indices of human dentin and enamel are approximately 1.56 and 1.65, respectively. The enamel layer is relatively thin and transparent. Therefore, it is better to use the refractive index value of dentin (1.56) as a guide, because otherwise optical variations become visible. Most composites use filler particles and resins with refractive indices between 1.45 and 1.55. Consequently, a perfect transition from enamel to dentin is hardly achievable with a composite. However, even more important than a perfect match of the refractive index of the natural tooth and restoration is the match of the refractive indices of the matrix, coupling agent, and filler particles. If the indices of the different components vary too much, light scattering occurs at the resin-filler interface, resulting in a material that looks opaque and has a reduced transparency for light.

Dark pigments (B) absorb more light (A). Therefore, lighter materials are easier to cure with light. The pigments absorb specific wavelengths from the visible spectrum. The wavelength of the reflected light is added to the color reflected from the respective color pigment />