Figure 1 The mandibular occlusion rim is built up with baseplate wax after the material used for making the interocclusal jaw relation record is removed.

Figures 2 and 3 The occlusion rims have been rebuilt with baseplate wax and are ready for the arrangement of teeth. Note the horizontal overlap.

Figure 4 Note the position of the center line, the canine line and the high lip line. These are the lines which the dentist uses to select teeth for his patient. The center line is transferred from the occlusion rim to the maxillary cast as a permanent reference.

Figure 5 The center line may first be marked with a pencil to insure its proper placement.

Figure 6 A block of wax corresponding to the position of the maxillary left central incisor is removed from the occlusion rim.

Figure 7 The wax surrounding this area is softened with a hot spatula.

Figure 8 Sometimes the baseplate may interfere with proper placement of the teeth. When this occurs a portion of the baseplate is removed. The section is first cut on the tissue surface with a fissure bur (a) and is then lifted out with an instrument (b). The cast opposite the alteration should be lightly coated with Vaseline.

Figure 9 The maxillary central incisor is placed so that the long axis shows a slight distal inclination to the perpendicular. The incisal edge is on the occlusal plane.

Figure 10 The neck of the tooth should be slightly depressed. However, the facial surface of the tooth is nearly perpendicular to the occlusal plane. Avoid over-depressing the neck of this tooth or the tooth will not be in a natural position when viewed in the mouth.

Figure 11 The maxillary left central incisor is placed in the molten wax to conform to the position shown in Figures 9 and 10. The incisal edge is on the occlusal plane. An aluminum plate may be used to orient the teeth to the occlusal plane.

Figure 12 The maxillary left central incisor is in proper position. A small amount of wax has been flowed around the tooth to insure its retention in the wax.

Figure 13 The maxillary lateral incisor has slightly more distal inclination than the central incisor. The incisal edge is usually ½ to 1 mm. above the occlusal plane.

Figure 15 A block of wax is removed in the left lateral incisor area.

Figure 16 The wax is softened with a hot wax spatula.

Figure 17 The lateral incisor is placed in position in the softened wax.

Figure 18 The maxillary left lateral incisor is placed to conform to the position shown in Figures 13 and 14. Note that the incisal edge is slightly above the occlusal plane and that the neck is slightly depressed.

Figure 19 The maxillary canine is placed so that the long axis is almost vertical. It may have a slight distal inclination but should not lean mesially. The incisal tip is on the occlusal plane.

Figure 20 The neck of the maxillary canine is prominent.

Figures 21 and 22 The maxillary left canine is placed in position using the same technique previously used for the central and lateral incisors. The canine tooth is an important tooth in any tooth arrangement because it forms the corner of the dental arch. The maxillary canine has two planes on the facial surface; the mesial plane should follow the contour of the anterior teeth while the distal plane will be in line with the posterior teeth. The neck of the tooth is prominent as it supports the corner of the patient’s mouth. 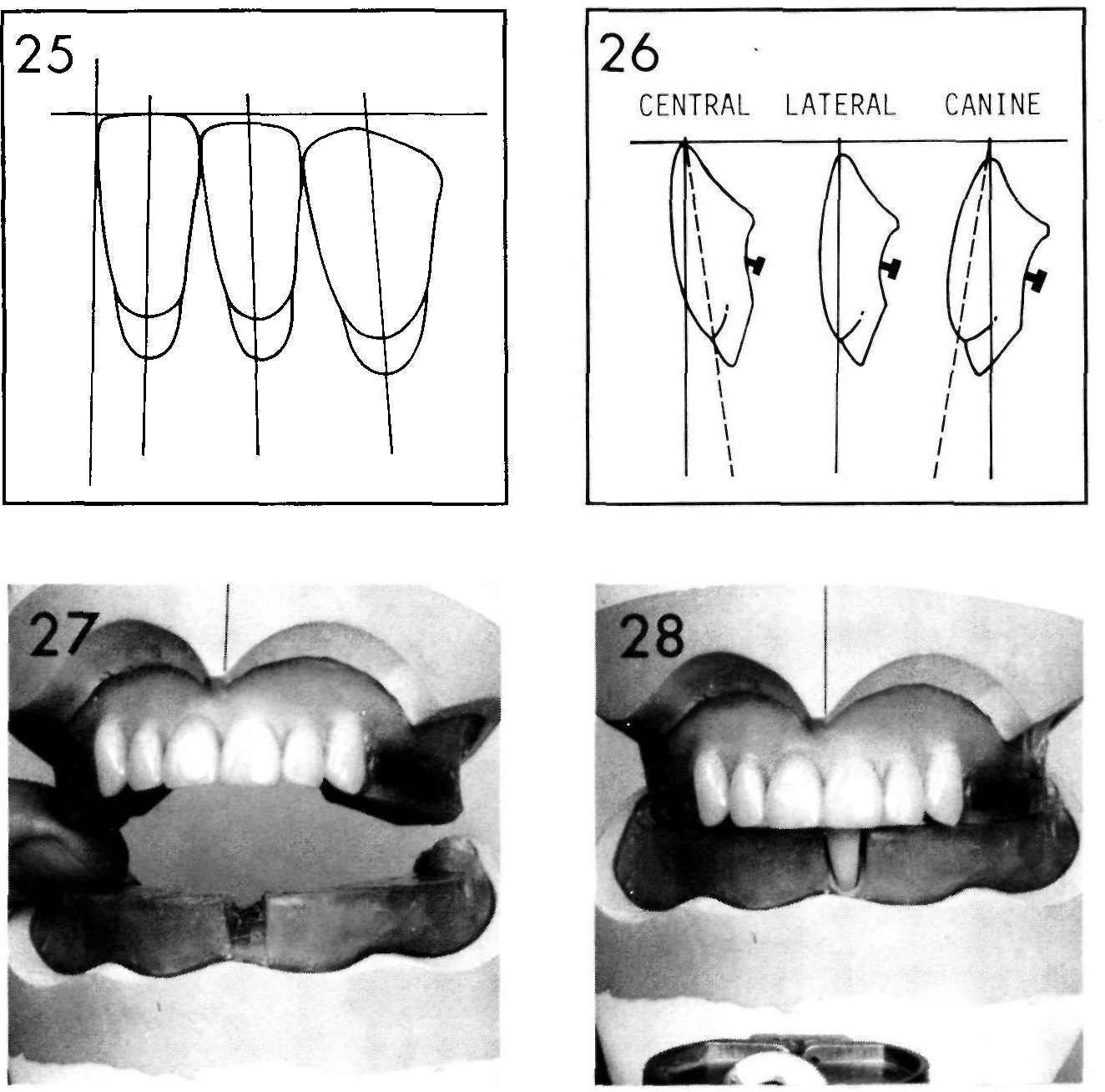 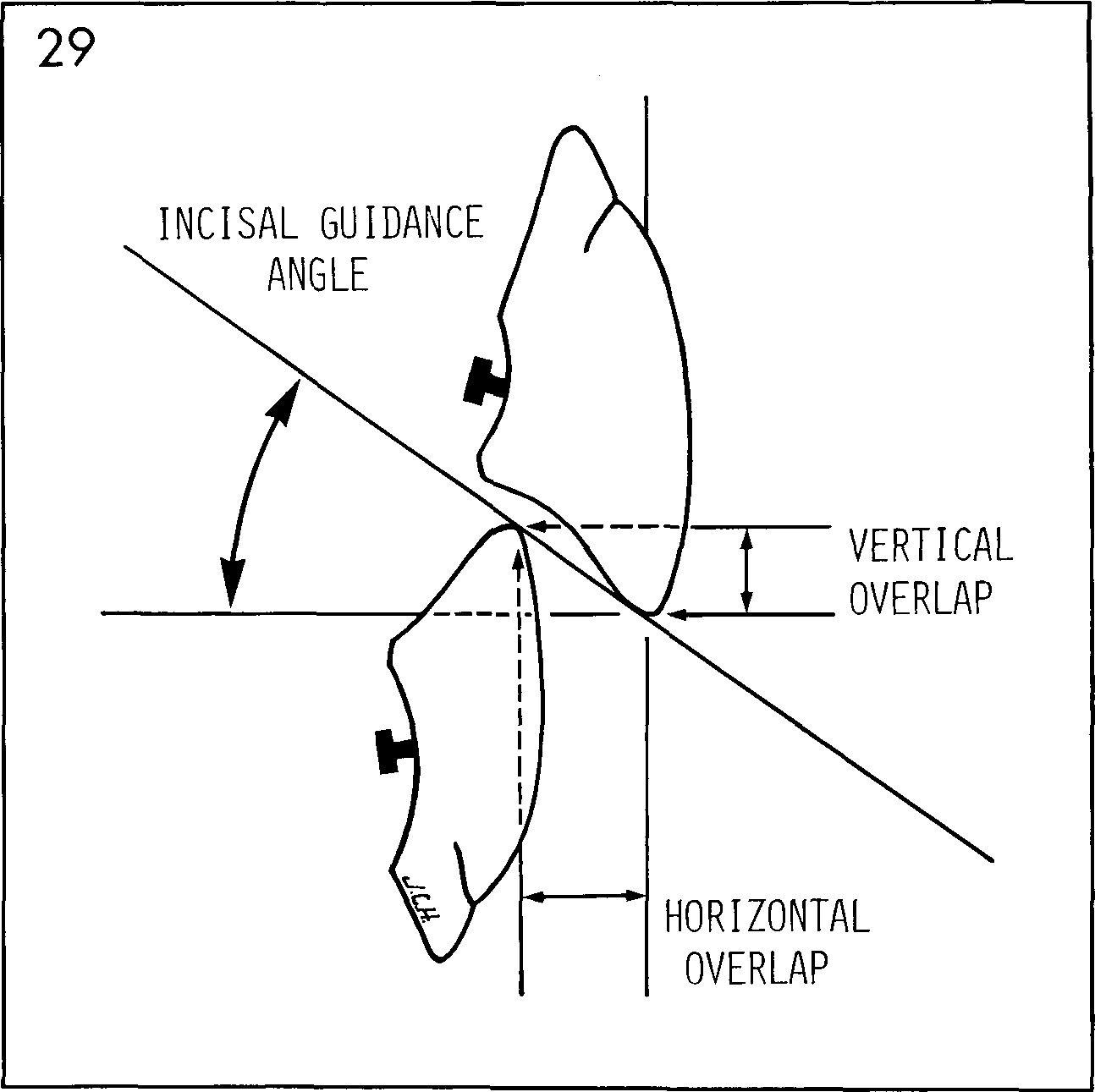 Figure 24 The arrangement of the maxillary anterior teeth has been completed and the wax smoothed around the teeth.

Figures 27 and 28 A block of wax is removed from the mandibular occlusion rim, the wax softened and the mandibular central incisor placed in position.

Figures 30 and 31 The same procedure is used to set the mandibular left lateral incisor in proper position.

Figures 32 and 33 The mandibular left canine is set in position as indicated by the facial surface of the occlusion rim and the inclinations shown in Figures 25 and 26.

Figure 34 The mandibular right anterior teeth are arranged in a similar manner.

Figures 36 and 37 Wax has been added and roughly contoured around the anterior teeth. Excess wax should be removed from the surface of the teeth.

Figure 38 The anterior teeth should be examined from the occlusal aspect to insure that the facial surfaces of the teeth follow the original contours of the occlusion rim.

Figure 39 Artificial teeth should not be arranged in a stereotyped manner. Some variations, without losing natural inclinations, will make artificial teeth appear more natural. These variations may be laps, rotations, differences in the level of incisal edges, or esthetic spacing. These deviations should be placed in the teeth by the dentist at the time of the try-in, or by the technician upon prescription by the dentist.

Figure 40 The arrangement of the anterior teeth is not complete until they have been checked in protrusive and lateral excursions. Here they are being checked in protrusive. Note that the teeth touch and that the incisal pin is contacting the incisal guide table. To insure proper contact, each mandibular anterior tooth may be checked for excursive movements while it is being set.

Figure 41 The right lateral movement is checked. Note that the pin is above the incisal guide table.

Figure 43 The lateral wing of the incisal guide table is raised until it contacts the incisal pin. The extent to which the lateral wings may be raised is determined to some extent by the type of posterior teeth to be used; the higher the cusps, the steeper the lateral guides may be set. However, free articulation is improved by keeping the wings as low as possible.