Advances in In Vitro Testing Techniques for Dentine Hypersensitivity

Dentine permeability evaluation – fluid flow rate (hydraulic conductance model)
Scanning electron microscopy (SEM)
Environmental scanning electron microscopy (ESEM)
Energy-dispersive X-ray spectroscopy (EDS, EDX or XEDS) also called energy-dispersive X-ray analysis (EDXA) or energy-dispersive X-ray microanalysis (EDXMA)
Atomic force microscopy (AFM)
Raman and micro-Raman spectroscopy
Fourier transform infrared spectroscopy (FTIR)
Confocal laser scanning microscopy (CLSM)
Focused ion beam scanning electron microscopy (FIB SEM)
Solid-state nuclear magnetic resonance (NMR) spectroscopy
27Al, 29Si, 19F and 31P magic angle spinning nuclear magnetic resonance (MAS-NMR)
A dynamic method to measure fluid flow rate (dentine permeability) through the dentine tubules was first proposed by Pashley (1986, 1989). It was postulated (in accordance with the hydrodynamic theory) that the larger the area and numbers of open dentine tubules, the higher the fluid flow rates through the dentine tubules, as demonstrated by Pashley (1986). The calculation of the in vitro dentine permeability and its variation over time represents an interesting method that offered the possibility to quantitatively determine the effectiveness of a specific treatment (Chap.​ 2). It should be noted however that there was a wide variation in the flow rates across the dentine disc when using this model. For example, flow rates may be higher in mid- to deep coronal dentine close to the pulp chamber than in superficial dentine (e.g., root dentine). As mentioned in Chap.​ 2, the importance of the radius of the open dentine tubule as implicated in the Hagen-Poiseuille equation is important when considering the impact of tubular occlusion of dentine permeability. Following these initial investigations by the Pashley group, other investigators have validated the methodology which has been extensively documented (Gillam et al. 1997). According to Prati et al. (2003), the advantage of this system was represented by the possibility to make repeated measurements over time and following storage in saliva or simulated body fluids and following acid exposure from, for example, Coca-Cola or citric acid. The method is extremely sensitive and offers many advantages that represent a fundamental step in the evaluation of any new and experimental treatment. Furthermore it represents a sophisticated yet practical method to evaluate the mechanisms associated with fluid flow in DH. It should be noted however as discussed above that there are limitations with using both human and bovine dentine discs with respect to anatomical differences as well as variations in the flow rates between extracted teeth (already in the oral cavity) and extracted unerupted third molars.
The treatment of dentine surface with EDTA (a chelating agent) or with etching agents (phosphoric acid, citric acid, etc.) has been demonstrated to remove all the smear layer present on the dentine surface and provides the possibility to create a standardised dentine surface with open dentine tubules representative (characteristics) of a tooth surface with DH (Reeder et al. 1978; Pashley et al. 1996; Gandolfi et al. 2008) (Fig. 6.1). 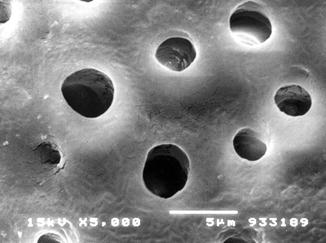 Fig. 6.1
Laboratory preparation of a dentine disc from a human third molar tooth. SEM observation of the occlusal surface following the removal of enamel, and after treatment with EDTA solution for 3 min, SEM observation confirmed the absence of the created smear layer and smear plugs and the presence of open dentine tubules
A number of investigators have reported that the presence of a smear layer on the dentine consistently reduces or abolishes the fluid flow rate (Table 6.2a). The initial studies by Pashley (1986, 1989) clearly demonstrated the correlation between the fluid flow rate and the number of open dentine tubules with the formation of the precipitation of a surface deposit on top of dentine tubules which artificially created an environment conducive to reducing and/or stopping the fluid flow rate (Pashley 1989). According to Prati (1994), both toothpaste formulations and varnishes may play a temporary role in reducing these fluid movements; however, many of these precipitates are easily removed by saliva and drinking, rinsing, chewing movement, acidic soft drinks, etc.
Table 6.2a
Dentine permeability (Lp) of dentine surfaces soaked in artificial saliva, citric acid and DPBS or HBSS used as simulated body fluids (SBFs)
One should however be aware of the differences in the fluid flow rates between the superficial and deep layers of dentine, for example, superficial dentine contains lower numbers of relatively small-diameter tubules that is relatively less permeable than that of the mid- to deep coronal dentine with a higher number of dentine tubules which is more permeable. Furthermore, it is also important to note that most of the investigations evaluating the effectiveness of potential desensitising products use mid-coronal dentine sections rather than cervical dentine sections which are probably more representative of DH in the clinical environment. This was often for practical reasons as the cutting of mid-coronal sections was relatively easier to perform rather than sectioning the cervical dentine of the crown/root area. Furthermore, the dentine tubules of the mid-coronal dentine were more numerous, wider in diameter and parallel compared to the dentine tubules in the cervical area of the tooth. The combination of both fluid flow rate measurement and SEM observation has also established that a thick smear layer may completely close all the dentine tubules and maintain over time reduced fluid flow rates (Fig. 6.1, Table 6.2a). The partial or the complete exposure of dentine tubules has also been reported to increase the fluid flow rate following the removal of the smear layer with citric acid (a common component of commercial acidic soft drinks and juices) (Prati et al. 2002) (Tables 6.2b and 6.2c).
Table 6.2b
Dentine permeability (Lp) values following the application of selected commercial toothpaste formulations
Table 6.2c
Dentine permeability (Lp) following the application of selected professional treatments
The use of SEM is however important to detect the morphology of dentine surface before and following the application of some treatment and to test the resistance/stability of the treatment on the dentine surface. The main scope of this methodology is the quantification of changes in the dentine tubule parameters and the detection of the closed/open dentine tubules following the application of different agents, for example, solutions, toothpaste formulations, professionally administered polishing pastes, etc. (Pashley 1989; Gillam et al. 2001; Ahmed et al. 2005; Burnett et al. 2013). The analysis of the longitudinal sections of dentine discs may also offer the ability of mapping the dentine tubule morphology (Pashley 1989). Smear plugs created by a smear layer or by toothpaste formulations may (as previously mentioned) occlude the dentine tubules for more than 10 μm or occlude the dentine tubule by a deposition in the middle part of the tubules (Figs. 6.2 and 6.3). 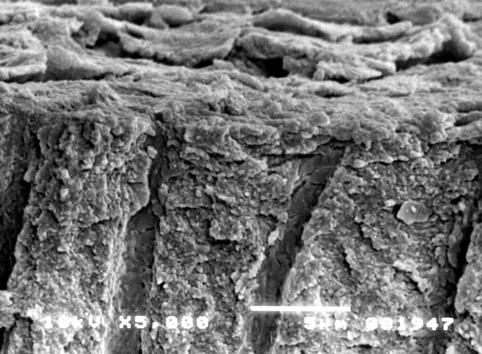 Fig. 6.2
Cross section of a dentine disc sample. The smear layer is visible on the surface of the dentine. The cobblestone morphology of the smear layer observed in this section may be due to the desiccation of the sample. The dentine tubules are partially covered (and occluded) by a number of smear plugs 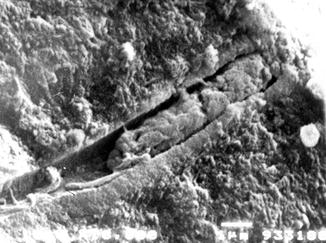 Fig. 6.3
Cross section of a dentine disc sample where the smear plug is visible in the occluded dentine tubule. The brushing procedures may create fine debris (smear layer) and together with the toothpaste components may be burnished or forced into the open dentine tubules creating a smear layer plug. Interestingly, there are small gaps visible around the plug, but this may probably be related to the desiccation of the sample. In this condition the recorded dentine fluid flow rate was very low. The observation that when the majority of the dentine tubules or either partially or completed occluded with a subsequent reduction in fluid flow may therefore have relevance according to the hydrodynamic theory in potentially reducing DH in the in vivo environment
SEM observation in combination with fluid flow rate measurement has also demonstrated that the application of a mild to strong acid (acidic soft drinks, e.g. Coca-Cola, juices, etc.) may completely remove the smear layer and open dentine tubules with a subsequent increase in the fluid flow rate. Phosphoric, citric, pyruvic, maleic, tannic and acetic acids and other acids present in wine and beverages may also strongly increase dentine permeability and remove all the smear layer, as demonstrated by SEM observation (Prati et al. 1989; 2002), resulting in the dentine surface being completely depleted from any smear layer protection and a subsequent increase in dentine permeability. One of the added advantages of using the SEM methodology is its ability to provide details of the dentine surface, dentine plugs and collagen fibril, although the methodology does have its limitations, for example, the time taken in the preparation of the specimen, the preparation of the specimen which limits any further investigation, artefacts in the form of fractures of the dentine structure or associated smear layers due to the desiccation of the sample prior to imaging, etc.
For example, toothpaste formulations create a deposition or precipitate that may cover the entire surface and obscure a number of the dentine tubules as demonstrated by the SEM pictures (Figs. 6.4, 6.5 and 6.6). Each toothpaste may present a typical morphology, suggesting that the different compositions of both the active ingredient(s) and excipients may be sufficient to have a chemical interaction on “a so active” substrate as in dentine and smear layer (Prati et al. 2003). A number of these toothpaste formulations create a layer of cuboidal crystals of 0.5–2 μm diameters with associated fine debris that appears to be partially immersed in a deeper collagen matrix. It is evident that the application of toothpaste to the dentine surface may create a new artificial smear layer mainly composed of toothpaste ingredients, for example, silica. This artificial smear layer may however be susceptible to removal by saliva or by a gentle washout with water which may reopen the dentine tubules and affect the fluid flow rate. As previously mentioned, the application of acidic soft drinks may partially remove the surface deposition as in the example of calcium oxalate crystal deposits. Potassium oxalate has however been reported to be acid resistant reducing the risk of their removal. Furthermore, potassium oxalate has the ability to create very fine deposits inside the dentine tubules (Gillam et al. 2001, Mongiorgi and Prati 1994, Pereira et al. 2005, Markowitz and Pashley 2007) which may effectively reduce the functional diameter of the dentine tubules and affect the fluid flow rate. 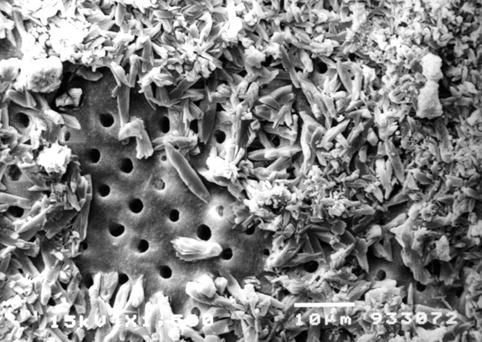 Fig. 6.4
The occlusal surface of a dentine disc. The application of toothpaste and the subsequent immersion in water/saliva created a newly constituted smear layer, mainly composed of toothpaste crystals and deposits. In this sample the dimension of the toothpaste deposits prevented their penetration into the dentine tubules. The effectiveness of the toothpaste to occlude the dentine tubules and subsequently reduce dentine permeability may be affected by a number of factors within the oral environment, for example the deposit may be ‘washed out’ by the brushing of the teeth, the impact of saliva and acidic components within the diet (e.g., acidic soft drinks) 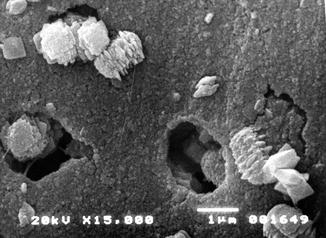 Fig. 6.5
Only gold members can continue reading. Log In or Register to continue