Fig. 9.1
Oral Health Impact Profile (OHIP) (Acknowledgement to Slade and Spencer 1994). FL functional limitation, P1 physical pain, P2 psychological discomfort, D1 physical disability, D2 psychological disability, D3 social disability, H handicap
The 49-item version of the OHIP gives detailed information and is a sophisticated instrument when OHRQoL is the primary outcome in a clinical setting. However, it is rather time consuming and requires a substantial effort for the respondents. Consequently, short forms (21 items, 14 items, 5 items) have been developed (Locker and Allen 2002; Slade 1997) and proposed for use in settings where the time burden of a long OHRQoL questionnaire needs to be minimized. A version with 14 items is most frequently used (Baba et al. 2008).

In some instances, generic measures are insufficient in assessing the links between oral conditions and OHRQoL. For this reason, an OHRQoL measure specific for the impact of DH was recently developed, based on interviews with people with DH (Boiko et al. 2010; Gibson et al. 2010): The Dentine Hypersensitivity Experience Questionnaire (DHEQ) (Fig. 9.2). This instrument aims to measure the day to day impact of specific events associated with DH on QHRQoL. The questionnaire was developed using a multistaged impact approach and an explicit theoretical model. As a result, the DHEQ questionnaire has 48 items containing a description of the pain (six items), a measurement of pain via visual analogue scale (3), a scale to capture the subjective impact of DH (34), a global oral health rating (1), and a scale to record effects on overall life (4).

Fig. 9.2
Impact scale of the Dentine Hypersensitivity Experience Questionnaire (DHEQ) (Acknowledgement to Boiko et al. 2010 and Baker et al. 2014)
The impact scale comprises 34 items and has five subscales based on the initial domains of the Wilson and Cleary model (1995): functional restrictions (four items), coping (12), social impact (5), emotional impact (8), and identity (5). The items have coded responses on 7-point Likert scales (labeled strongly disagree, disagree, disagree a little, neither agree nor disagree, agree a little, agree, and strongly agree, coded 1–7, respectively). The summary measure (“total score”) of the impact scale is calculated as the sum of the item scores per participant (possible range 34–238). The higher the total score of the DHEQ is, the more impaired the patient’s OHRQoL is.
The DHEQ has been reported to demonstrate good psychometric properties (Boiko et al. 2010). It is longitudinally reliable, valid, and responsive and can discriminate between treatments of different efficacy (Baker et al. 2014). Moreover, a 10- and 15-item short form of the DHEQ has recently been derived (Machuca et al. 2014).

As shown in the other chapters of this book, DH is a significant global clinical oral health problem in the adult population (Mantzourani and Sharma 2013) (Chap.​ 3) that is characterized by short or transient sharp pain arising from exposed dentine in response to an array of stimuli (such as thermal, mechanical, osmotic, or chemical elements) that cannot be ascribed to any other forms of dental defect or disease (Canadian Advisory Board on Dentin Hypersensitivity 2003) (Chaps.​ 4 and 5). The cold stimulus has been reported to cause the greatest problem to people affected by DH, as it increases the outward flow of fluid in the dentinal tubules, whereas a thermal hot stimulus produces contraction of the fluid in the tubules (Matthews and Vongsavan 1994).
Nevertheless, pain has extremely variable characteristics, ranging from discrete discomfort to extreme severity (McGrath 1986, 1994; Porto et al. 2009). In addition, not all people experiencing tooth sensitivity seek treatment to desensitize their teeth, because some do not perceive DH to be a severe oral health problem (Gillam et al. 1999). However, the influence of pain experienced can be considerable and can affect daily activities depending on the source of discomfort (e.g., pain associated with consuming hot or cold foods and beverages [coffee, ice cream], during tooth brushing, or sometimes even while breathing) (Schuurs et al. 1995; Gillam et al. 2002). In these instances, these symptoms are highly relevant from the person’s point of view and often have a considerable adverse impact on daily quality of life (Locker 1988).

Oral Health-Related Quality of Life in Patients with DH

To date, there has been limited research conducted that has explored DH from a patient perspective (Bekes et al. 2008, 2009; Boiko et al. 2010; Baker et al. 2014; He et al. 2012). For example, existing clinical reviews have focused only in a limited manner on this topic (Bekes and Hirsch 2013; Sixou 2013). In the clinical environment, the patients’ experiences of pain have been only been recorded in response to a stimulus (Gillam and Newman 1993; Rees and Addy 2002; Gillam et al. 2000), with little consideration given to the impact of DH on everyday life. Therefore, knowledge about the influence of DH on OHRQoL is still incomplete, and very few studies have been devoted to this aspect of DH.
The first data that were published using an instrument that examined patients’ self-perception of health and well-being to explore the impact of DH on OHRQoL came from a study that was conducted in Germany (Bekes et al. 2009). OHRQoL impairment was evaluated in 656 patients seeking care for their hypersensitive teeth in German dental practices. The study participants were asked to complete the adapted German version of the OHIP (OHIP-G) (John et al. 2002) prior to treatment. When their OHIP summary scores were analyzed and compared with those in a sample of the German general population (n = 1,541) (John et al. 2003), the distribution of OHIP-G summary scores in patients with DH and in the general population was found to be different. The general-population participants had an OHIP-G median score of 5, compared to a median score of 30 in the patient group (Fig. 9.3). The 10 % of the subjects with the highest OHIP-G summary scores presented scores of 36 or higher (general population) and 66 or higher (patients). The mean OHIP-G summary score value of the study participants from the general population was 12.2 (±18.4), while the patients’ mean OHIP-G summary score was 34.5 (±22.6). The difference in the mean values of 22.3 was clinically meaningful and statistically significant (P < 0.001). These results demonstrated that the patients with DH had impaired OHRQoL. The results also indicated that the influence of gender on OHRQoL depended on the population. In the general-population sample, female subjects had lower OHIP scores than male subjects (P = 0.003), whereas in the patient group, female patients had higher OHIP scores than male patients, but the difference was not statistically significant (P = 0.27). Lastly, age showed a curvilinear association with OHRQoL, with lower OHIP scores associated with younger and older adults and higher OHIP scores (reporting more problems and indicating impaired OHRQoL) associated with middle-aged adults in both populations. The difference between younger (15–39 years) and older adults (40+ years) was statistically significant in the general population (P < 0.001). In the patient group, the difference was similar in magnitude to that and close to statistical significance (P = 0.08). 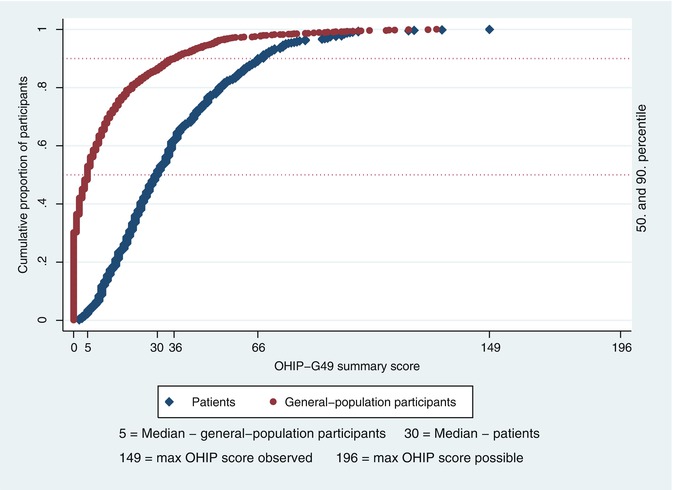 Fig. 9.3
Empirical cumulative distribution functions of Oral Health Impact Profile-G summary scores for general-population participants and patients with DH (reproduced from Bekes et al. 2009) Bekes et al. 2009)
The results reflect findings for patients seeking care for their condition and certainly cannot be generalized to individuals experiencing DH but not seeking care. Moreover, the results relate to patients seen by general dentists and may not be generalized to those that could be obtained by health professionals who are more trained or calibrated in the assessment of DH. However, the setting is representative for typical patients who initially present in dental practice and where the general dentist is confronted with providing diagnosis and treatment for the challenging clinical problem of DH (Bekes et al. 2009).
The same investigators evaluated OHRQoL in 713 patients with DH before and after treatment intervention (Bekes et al. 2008). The treatment regimen was a 21-day home use of desensitizing dentifrice (elmex SENSITIVE toothpaste) in combination with a dental rinse (elmex SENSITIVE dental rinse) and a special toothbrush (elmex interX SENSITIVE toothbrush) twice a day for oral hygiene. The patients completed the OHIP-G before and after treatment intervention. Following the intervention, OHRQoL improved considerably, with a mean decrease of 13.5 OHIP-G units (P < 0.001). In particular, 50 % of the patients showed a decrease of 11 or more OHIP-G units. No statistical significances however were observed for gender or age. The study had some limitations, as it was not randomized and did not include a control or placebo group. However, it was the first study undertaken to evaluate the effect of a DH treatment on OHRQoL and not solely from that of the clinician’s perspective. Moreover, the study demonstrated that it is possible to measure the success of a treatment for DH with an OHRQoL instrument, the OHIP.
The disease-specific DHEQ that was introduced recently (Boiko et al. 2010) provided an alternative to the “generic” OHIP for assessing OHRQoL in patients with DH. It directly addressed the problems associated with sensitive teeth. Initial work with this newly developed measure examined whether it met the gold-standard guidelines for QoL instruments (Aaronson et al. 2002). For this initial analysis, the DHEQ was first applied in a general-population sample and in a sample of patients clinically diagnosed with DH (Boiko et al. 2010). The DHEQ instrument demonstrated good psychometric properties and was internally consistent (Cronbach’s a = 0.86) and reliable (ICC = 0.92) and demonstrated high validity scores. The DHEQ indicated that patients with DH had higher scores on the DHEQ (147.6 ± 5.98) than the general population (130.96 ± 35.06), indicating that these patients had an impaired OHRQoL. In particular, the DHEQ detected functional limitations (e.g., problems with eating ice cream), coping behaviors (e.g., careful when breathing, warming food/drinks, avoiding contact with certain teeth), emotional (e.g., annoying sensations), and social impacts (e.g., difficulties conversing) caused by DH.
Only gold members can continue reading. Log In or Register to continue