9 Head and Neck Anatomy and Physiology

Head and Neck Anatomy and Physiology

Key learning points
A factual knowledge of
A factual awareness of

The anatomy of the head and neck region of the human body is of relevance to the dental nurse in providing the underpinning knowledge required to understand their role within the dental team, as well as knowledge of the full range of topics covered in their dental nurse training programme. Dental nurses are often asked for information and advice from patients with regard to their oral health, and within the bounds of their profession, they will be able to give more accurate and ­useful information when it is based on the head and neck area in full, rather than just on teeth. For instance, a full understanding of the ­subject of local anaesthesia requires knowledge of the skull and oral anatomy, as well as of the drugs used.

Anatomy of the skull

The skull is the topmost part of the bony skeleton of the body, the head, and is made up of three main areas.

All the bones of the skull except the lower jaw, the mandible, are fixed to each other by immovable joints called sutures.

The base (underside) of the cranium articulates with the topmost bone of the vertebral column, the atlas, and allows nodding movements of the head.

Like most bones in the body, the skull develops in the fetus as cartilage, which is gradually ­converted to bone during the growth of the body into adulthood.

The outer layer of all bone is called compact bone, and is perforated by many natural bony ­openings (foramina) to allow the passage of nerve and blood vessels. The inner layer is called ­cancellous bone and is quite sponge-like in appearance, because if it was a solid structure it would make the bone too heavy for the muscles to be able to lift. Nerves and blood vessels run freely within the spongy structure of the cancellous layer, and pass into and out of it through the foramina.

At birth and during infancy, the bony plates making up the cranium are separated from each other by two natural membrane-covered spaces called fontanelles, which allow growth of the brain without any bony restriction. During growth, the spaces gradually become filled with bone and close together to provide a protective helmet surrounding the brain. The bony plates join together like a jigsaw puzzle at the coronoid sutures. By the age of 18 months the fontanelles should have closed completely, following the natural growth together of the bony plates making up the cranium.

The cranium is composed of eight bones which are separated by the coronoid sutures – these are visible on a dry skull as the zig-zagged joints between the bony plates. The bones themselves are as follows. 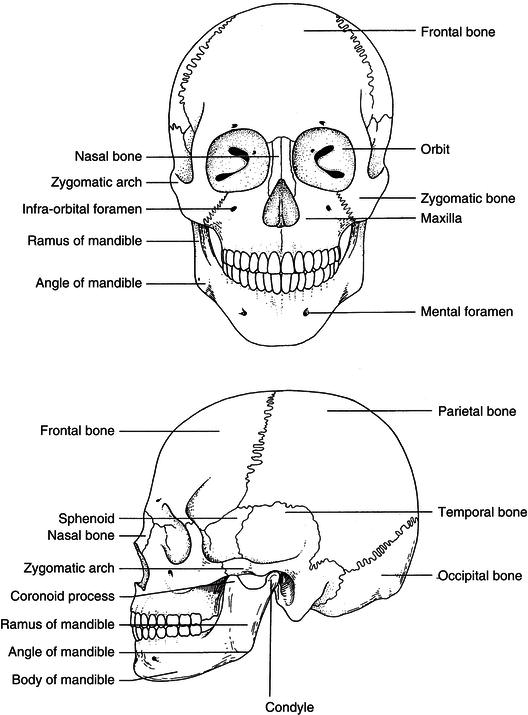 The skull and cranial bones are illustrated in Figure 9.1.

All the sensory nerve cells running from the body to the brain and all the motor nerves running from the brain to the body have to pass in and out of this bony cavity, and they do so through the many natural foramina on the underside of the cranium. Similarly, all the blood vessels supplying the head and neck structures pass through these same foramina or between natural spaces ­between adjacent bones, called fissures.

In addition to these bony openings, some cranial bones also have various bony projections and plates on their outer surfaces, which serve as attachments for ligaments and muscles associated with head and jaw movements or which form part of various facial structures.

The largest foramen of all in the cranium is the foramen magnum, which opens through the occipital bone and allows the exit of the spinal cord from the base of the brain and into the vertebral column of the spine.

The 12 pairs of nerves that branch off directly from the underside of the brain itself, and which supply the head and neck region only, are called the cranial nerves – those relevant to the dental nurse are discussed later. The nerves that supply the rest of the body all branch off the spinal cord at various points down the vertebral column, and are referred to as the systemic nerves. They are not relevant to the dental nurse.

The face is composed of 11 bones which are separated from each other by sutures, as in the ­cranium. The main bones themselves are as follows.

The skull and facial bones are shown in Figure 9.1.

Although strictly speaking the jaw bones are actually part of the facial skeleton, they are ­considered separately as they are of such importance to the dental team. The two jaws are each made up of a pair of bones which are fixed solidly in their midlines.

The maxilla effectively forms the middle third of the face and as with various other cranial bones, it has several foramina and bony projections which are dentally relevant.

Each side of the maxilla forms part of the eye socket, the nose and the front of the cheekbone. The two maxilla bones themselves are hollow within, because if they were solid they would be too heavy to allow the head to be lifted up. Each hollow space is called the maxillary antrum or sinus, and lies just above the root apices of the upper molar and second premolar teeth (Figure 9.3). This hollow space can be easily perforated during the extraction of these teeth, causing an unwanted connection between the mouth and the antrum called an oroantral fistula. A natural connection between the nasal cavity and the antra exists, to allow drainage of the sinuses to occur, and to give resonance to the voice. 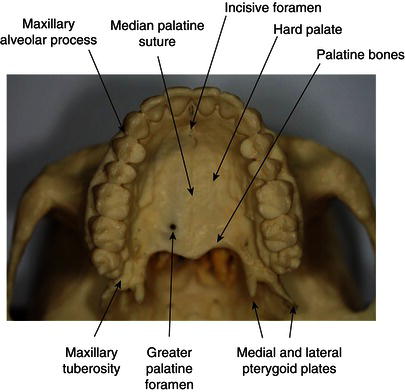 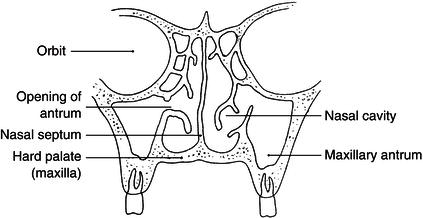 Inflammation of these air spaces (sinusitis) due to a respiratory infection often mimics dental pain in these teeth, or conversely a dental infection can be mistaken for sinusitis.

The two maxilla bones join together in the centre-line of the face at the intermaxillary suture and the lowest portions of these two sections form the alveolar process. This horseshoe-shaped structure is where both sets of upper teeth develop before birth, and later erupt as the upper ­primary and then secondary dentition.

The back end of each side of the alveolar process is called the maxillary tuberosity, and this can be fractured off during difficult upper wisdom tooth extractions (Figure 9.4).

The maxilla and palatine bones (Figure 9.5) are perforated by several foramina to allow passage of the nerves and blood vessels supplying the upper teeth and their surrounding soft tissues, the four main ones being as follows. 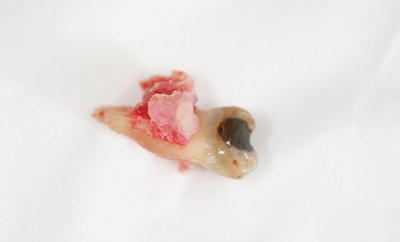 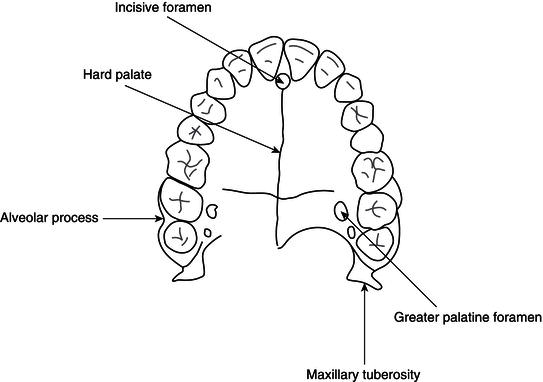 The mandible’s only connection with the rest of the skull is at the two temporomandibular joints (TMJ), where the bone moves as a hinge joint and allow the mouth to open and close. The point at which the mandible connects with the temporal bone at the TMJ is the head of condyle (Figure 9.7). The muscles of mastication, which allow jaw-closing and chewing movements, all connect ­between the cranium and various points on the mandible, as discussed later.

The mandible also has an alveolar process running around it, which supports all the lower teeth. Below this process, on the inner side of the body of the mandible lies a ridge of bone called the mylohyoid ridge, where the mylohyoid muscle attaches to form the floor of the mouth. A bony ridge also lies on the outer surface of the ramus of the mandible, called the external oblique ridge, which marks the base of the alveolar process in this area.

The two foramina in the mandible which are of interest to the dental nurse are as follows. 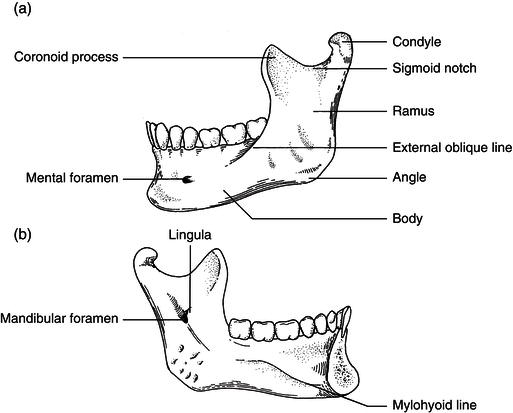 This joint is formed between the cond/>