Micro-organisms that have the capability of producing a disease are referred to as pathogenic organisms, or pathogens, as opposed to those that cannot cause illness or disease which are called non-pathogens.

The three main groups of pathogenic micro-organisms are as follows.

A fourth type of micro-organism, called protozoa, also exists but has no relevance to dentistry, as protozoa do not cause any diseases within the oral cavity.

In addition, recent research has uncovered the existence of prions, which are not a living ­micro-organism but rather a type of special protein that is capable of causing disease. Those ­diseases caused by prions that have been discovered so far include ‘mad cow disease’ and the human variation of it which is called Creutzfeldt–Jakob disease (CJD).

The transmission of CJD is becoming more of a concern in dentistry as prions are not killed by the usual decontamination and sterilisation techniques used in the dental surgery environment. This means that an infected patient could pass on CJD to another patient when supposedly sterile instruments are reused. As the prions are known to specifically affect nerve tissue, all endodontic instruments (those used for root canal treatment, such as barbed broaches and files) now have to be considered as single-use disposable items in dentistry, as they will come into contact with the nerve tissue found within the pulp of the teeth during normal use. These instruments must all be safely discarded in sharps boxes after being used on just one patient, and then new instruments are used on the next patient. This avoids the possibility of passing prions from the first patient to the second.

The new instruments will have been sterilised at the manufacturing stage, using an industrial sterilisation technique such as gamma irradiation. The topics of decontamination, sterilisation and infection control are discussed in detail in Chapter 8.

The oral cavity provides the ideal conditions for micro-organisms to live, especially bacteria, being warm and well oxygenated and providing many sheltered areas for them to lodge without being ­disturbed and removed. A healthy oral cavity normally contains many different bacteria, many of which are harmless, but others cause disease within the oral cavity when their numbers increase. Other micro-organisms not normally present in health can be transferred to the oral cavity and cause disease, such as by using contaminated crockery or cutlery, or by sharing a toothbrush between ­individuals. The pathogenic micro-organisms relevant to dentistry are described below.

These single-cell micro-organisms have rigid outer walls which determine their shape, and help to categorise them into named groups (Figure 7.1).

When their living conditions are not ideal for the colony to grow and expand, bacteria survive as spores, in a similar way that plants produce seeds to survive the winter while the parent plant dies from the cold. The spores have a very hard outer coating that protects the bacteria within from chemicals, from drought, and from a wide variation in temperature. Many can therefore survive the action of disinfecting chemicals used in dentistry (such as bleach), and the only sure way of removing the risk of bacterial contamination on dental instruments is to either sterilise them or to only use them once before they are discarded (single-use items). Dental instruments are expensive to buy, so wherever possible they are manufactured to withstand the sterilisation process and can then be reused safely. 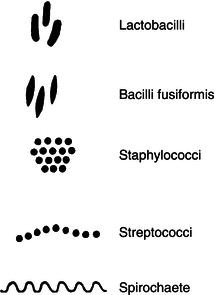 Some bacteria found in the oral cavity have adapted to exist in areas of low oxygen levels, such as deep within a carious lesion or a periodontal pocket. They are referred to as anaerobic bacteria and are particularly harmful because they often require different treatment methods to those used against the more usual aerobic bacteria.

Although the body’s natural defence mechanisms will help to protect it to some extent from attack by micro-organisms, by the existence of its natural immunity, drugs have also been ­developed to fight against them, and for bacteria the important drug groups are the following.

Both dental caries and periodontal disease are caused by bacterial infection of the dental hard tissues, or the supporting structures of the teeth, respectively. Prevention of these diseases and their treatment when present in a patient are the mainstay of the work carried out by the dental team on a daily basis.

These micro-organisms are far smaller than bacteria, being visible only with an electron ­microscope. They live within the cells of other organisms, including human tissue cells, existing as a ­protein capsule that contains all the chemicals the virus needs to reproduce within the cells of its host (Figure 7.2). The protein capsule is unique for every virus and causes the body cells to react against it (as an immune response) while trying to fight off the disease that the virus has produced.

Viral diseases are more difficult to cure than those caused by other micro-organisms because very few drugs have been developed against them, although some antiviral agents do exist. One such agent of relevance to the dental team is the drug aciclovir, which is used in a topical cream to treat ‘cold sore’ lesions of the lip. Others are being developed in the ongoing battle against AIDS.

Fortunately, vaccinations have been developed to prevent many (but not all) viral diseases instead. They consist of a harmless dose of the dead virus or its protein capsule which is injected into the individual or given orally. The presence of the dead virus or capsules causes the body’s immune system to fight against them by making antibodies, although the disease itself cannot develop fully and make the person unwell. If the individual is then exposed to the same viral ­disease again in the future, these antibodies already present in their body will fight off the viral attack and prevent the person from becoming ill. This is called acquired immunity.

Viruses are also more difficult to kill than bacteria, and either the process of sterilisation or the use of specialised viricidal chemicals is required to do so. Unless stated on the labelling as viricidal, routine disinfectants are not usually active against viruses.

Some of the more important viral infections of relevance to the dental team are shown in Table 7.2.

There are relatively more viral diseases of importance to the dental team than there are bacterial diseases, although none affect the teeth or their supporting structures and are therefore not associated with caries or periodontal disease. The viral diseases are important from an infection control point of view, as staff should be vaccinated against several of them and their infectivity is usually greater from person to person than for bacterial diseases. Indeed, when a patient is suffering from viral infections such as cold sores, mumps or chicken pox, it is best if their treatment is delayed to avoid the risk of spreading the infection to the workplace personnel.

Figure 7.2 Structure of a virus. 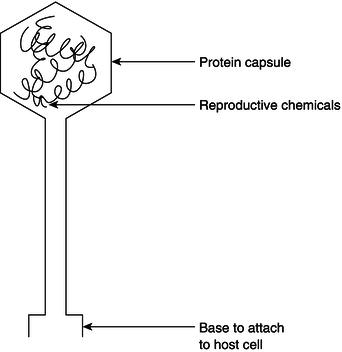 These are plant-like organisms similar to microscopic colonies of mushrooms or toadstools. They grow as an extensive network of branches lying across the body tissues (called hyphae) and ­reproduce by budding out from the ends of the hyphae, or by the production of spores from fruiting bodies (like microscopic mushrooms). They tend to live on the outer surface of the body; such as on the skin, the oral cavity lining, the nails and the surface of the eye, rather than growing within the body tissues.

The only fungal infection of dental importance is that caused by Candida albicans, which is responsible for the following oral lesions and diseases.