In 2001, 65.6% of people ages 2 years and older in the United States reported that they had visited a dentist within the previous year.30 According to a survey of American adults in 2003, slightly over 82% reported having a regular dentist.7 These figures show that, for a large portion of the U.S. population, access to dental care is more routine than ever. But for a disturbingly large subset of the population regular access is not so simple. It is perhaps easy for many dentists in busy practices not to fully appreciate the difficulty experienced by many of those who do not get regular care, because their attention, understandably, is directed toward providing care to their established patients. Among those with lower levels of access are the poor, members of minority groups, the elderly, the very young, the institutionalized, and those with many types of disabilities. People living in sparsely populated rural areas or in run-down urban areas, where dentists are few, also have much reduced access to care. Often several of these characteristics apply simultaneously, which makes the situation especially difficult.

Access is a complex, multidimensional concept. It is also a continuum, not a matter of presence or absence. How much access is the right amount is probably undefinable in absolute terms, at least partly because how much is enough differs from one person to another and even for the same person over time. Defining adequate access also is complex because the ability to overcome impediments to access varies from person to person.

There are a multitude of reasons for access problems, and many of them are caused or made worse by lack of resources. Often this lack of resources is as simple as not having money to pay the usual fees for dental care. In other cases, it can be lack of program funds needed to meet the costs of providing care for the homebound, the very young, and people with disabilities. In still others, it can be lack of resources to ensure that health care personnel have developed competence beyond the norm required to deal with some of these special needs. Providing the means to overcome physical barriers also can be expensive, and cultural mismatches between providers and patients from ethnic minorities also can present a substantial barrier. People who are not in the mainstream of the population due to minority or immigrant status, inadequate financial resources, compromised mobility, or special needs simply do not have the ready access to dental care that is enjoyed by most of the population.

The number of people enrolled in Medicaid in 2002 in the United States was estimated at 39.9 million, of whom 18.4 million were children.26 By definition, all of these individuals need financial help to pay for dental care. Medicaid coverage for dental care is mandated for children (although it is chronically underfunded, see Chapter 7), but for adults any Medicaid dental care beyond the most rudimentary emergency services is now rare. In 2002 there were another 4.2 million children enrolled in the State Children’s Health Insurance Program (see Chapter 7). In addition, of the 40.6 million individuals enrolled in Medicare in 2001, over 5.5 million were disabled (and under age 65) and approximately 4.5 million were 85 years or older, people who were likely to have mobility problems in accessing conventional dental practice. There is virtually no dental coverage in Medicare. These groups contain many of the people most likely to experience access problems, and they total nearly 50 million individuals (Medicaid, plus the disabled and those age 85 and older on Medicare), or more than 300 people per dentist, on average. Ensuring their dental care means that adequate means of financing must be forthcoming. Private dental practices, although they can and do provide some care of this type on a pro bono basis, require external help to provide care for this many individuals.

The largely government-subsidized safety net system, of which the migrant and community health centers are the major part, does play an important part in providing access where it might otherwise not be unavailable. Nevertheless, there needs to be more of these facilities and they need long-term support to be sustainable. In 2002 these health centers were able to provide dental care to 1.6 million people,27 only a fraction of the nearly 45 million Medicaid and State Children’s Health Insurance Program enrollees. It is evident that both the safety net system and private practices are required if the needs of these populations are to be met.

It is tempting to blame lack of access on an insufficient number of dentists, but this is far too oversimplified. Of course, a sufficient supply of dental personnel is necessary for good access to dental care. The traditional way to estimate the adequacy of the supply of dentists has been the dentist/population ratio. Fig. 9-1 shows the historical pattern in the ratio of dentists to population in the United States, with projections through the year 2020. From a peak in the late 1990s, the supply of dentists is projected to decline because of (1) the growth in the U.S. population (see Chapter 2), and (2) the impending retirement of the large number of dentists who graduated in the 1970s and 1980s, combined with smaller dental school class sizes since then (see Chapter 8). Even if dental school classes were to be expanded to the peak seen in the late 1970s, it would take at least until the 2020s to restore the dentist/population ratios of the early 1990s. 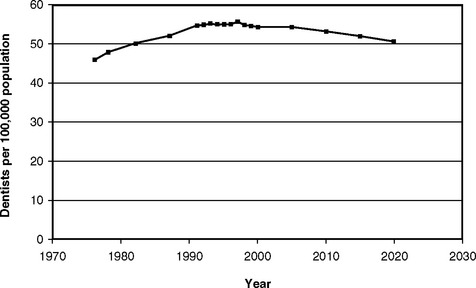 In addition to measures of the dentist/population ratio, the two other most commonly used approaches to estimating personnel needs are demand-based and need-based models. The demand-based approach comes from economic theory and aims to make forecasts of the quantity of dental care that people will actually consume. The price and supply of services are key components of these models. Demand-based models have been used by the Health Resources and Services Administration of the U.S. Department of Health and Human Services and by the American Dental Association (ADA) for their workforce forecasts.20,28,29 Through such models, it is possible to estimate how issues such as changes in insurance coverage, income levels, number of dentists, and population growth are likely to affect the use of dental care.

Need-based approaches to personnel requirements come from a philosophically different direction. Need-based models start from measurements of treatment need in a population, from which estimates are then derived of how much treatment would be required to meet those needs. The time required for treatment is added across the entire population, and from that an estimate of the number of required provider-hours of care can be determined.31 A complication with the need-based approach is that both the accumulated backlog of need and estimates of future disease must be included. Other inherent difficulties are that dentists can treat the same condition in different ways and that demand is often poorly related to need. Demand for some types of care, cosmetic restorations, for example, is difficult to predict, which complicates the need-based approach even further.

Adequacy of the Supply of Dentists

Although the number of dentists relative to population clearly is an important consideration in estimating the adequacy of the supply of dental care, by itself it is not a sufficient indication of shortage or surplus. Careful examination of Fig. 9-1 demonstrates this fact. In the early 1980s, when there were about 50 dentists per 100,000 population, there was widely considered to be “too many” dentists. Both the dental press and the popular media of the early 1980s contain a number of articles about the economic pinch that dentists were feeling because of what was perceived as a shortage of patients. Many dentists complained that they were not as busy as they wanted to be. By way of contrast, in the late 1990s, when there were nearly 55 dentists per 100,000 population (relatively about 10% more dentists), dentists reported being busier than ever, and their incomes had never been higher.8,19 The fact that 2000 persons per dentist was “not enough” in 1982 whereas 1800 people per dentist was “plenty” in 2000 shows that additional factors must be important in determining the adequacy of the dentist supply.

Uncertainty over the supply of dentists is not new. The meaning of the relative increase in the number of dentists between 1970 and the mid-1990s, followed by the projected decline over the next several decades, has aroused considerable discussion.6,14,16,17,21,23,29 For many years after World War II, both the dental profession and the public accepted that a shortage of dental personnel was imminent. It was expected that significant increases in demand, stemming from rising affluence, rapid increases in population (the postwar baby boom; see Chapter 2), and the high levels of caries at the time (see Chapter 20), would overwhelm the ability of the dental profession to provide all the care needed. The influential 1961 report The Survey of Dentistry18 recommended marked increases in the number of dental graduates and auxiliaries and made projections of future personnel shortages. Indeed, the population figures from the 1960 U.S. census (Fig. 9-2) showed a continuing increase in the young population that, if continued, was expected to severely tax many of the nation’s resources. 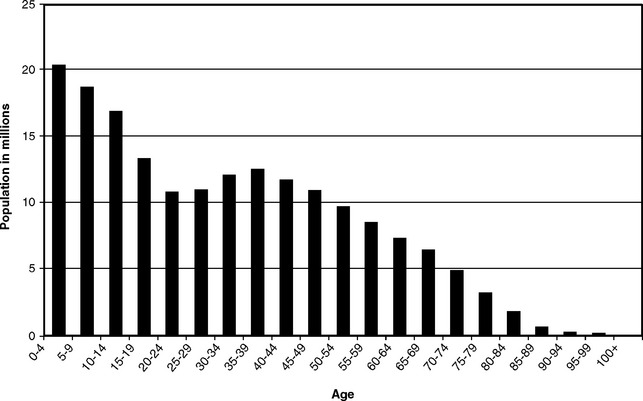 In 1963 the ADA referred to “the impending shortage of health personnel” as “probably the most critical problem in the health field today”5 and again foresaw shortages in 1965.1 These views were still in evidence in 1971, when the ADA’s Task Force on National Health Programs stated the following as a basic assumption:

The United States faces a shortage of dental personnel in the next 20 years and the shortage will occur whether or not there is a national dental health program.4

However, by the mid-1970s many in dentistry no longer accepted the existence of a personnel shortage.9,17 The combined effect of a large increase in the numbers of graduates (see Chapter 8), chiefly as a result of increased federal support of dental schools, plus the large and unforeseen drop in the rate of population growth (Fig. 9-3), led to the increase in the relative supply of dentists. The ADA agreed in 1973 that the relative supply of dentists was going to />