Although the DMF (decayed, missing, and filled teeth) index for caries has remained stable over a 50-year period, the philosophical basis for measuring periodontal diseases has changed several times over a shorter time span. In the early days of modern periodontal research (i.e., the 1950s and 1960s), “periodontal disease” was viewed as a single entity that began with gingivitis and progressed to periodontitis and tooth loss. This view is now obsolete (see Chapter 21), so that indexes based on it are considered invalid. The separate clinical measures now used for gingivitis and periodontitis were first described some 40 years ago, and they are still important. They will likely be joined soon by some measures based on molecular biology as knowledge in this area continues to grow rapidly.

Gingivitis is inflammation of the gingivae without involvement of the deeper supporting tissues. The oldest reversible index is the P-M-A (standing for Papillary-Marginal-Attached), which dates from immediately after World War II.41 As the inflammatory process became better understood, it gave way to the Gingival Index (GI) of Löe and Silness38 in the early 1960s, anindex that is still used. The GI grades the gingiva on the mesial, distal, buccal, and lingual surfaces of the teeth. Each area is scored on an ordinal scale of 0-3 according to the criteria shown in Box 16-1. The GI has been used to score selected teeth in the mouth56 as well as all erupted teeth.37 The GI, an index of gingivitis that takes no account of deeper changes in the periodontium, is sufficiently sensitive to distinguish between groups with little and with severe gingivitis, although it may not discriminate as well between groups in the middle ranges.

BOX 16-1 Scores and Criteria for the Gingival Index.38

Gingival bleeding after gentle probing has become a standard measure of gingivitis in clinical trials. Although visual assessments of inflammation (color, swelling) are subjective, the appearance of spots of blood after the probe is gently run around the gingival margin is more sensitive21 and more objective in those sites that are difficult to view directly.22 Validity against the GI has also been demonstrated.43 The major area of subjectivity with use of a gingival bleeding index is the “gentle probing,” which has been shown to vary between 3 and 130 g for different examiners.49

A further refinement of the bleeding indexes came with the Eastman Interdental Bleeding Index,14 which may be more sensitive than other measures of papillary bleeding.15 Gingival bleeding measures that do not carry any particular name are collectively designated by the acronym BOP (bleeding on probing).

The use of gingival bleeding indexes, as opposed to visual determination of gingivitis, is not recommended in public health programs for three reasons:

1. This degree of sensitivity is rarely required in surveys, surveillance, or screening; it may be needed in cohort and case-control studies.
2. Such indexes have uncertain discriminatory power in field conditions.39
3. Concerns about infection control make the deliberate inducement of gingival bleeding outside the clinic hard to justify.

The Modified Gingival Index (MGI) was developed to eliminate the use of bleeding on probing while still providing high visual sensitivity for incipient gingivitis.36 Gingivitis is an area in which the development of valid nonclinical measures would be highly beneficial.

Periodontitis is a family of related diseases that differ in natural history, and response to therapy but that are characterized by a common underlying chain of events.48 These commonalities, and their clinical expression, permit valid clinical measurement by similar procedures, basically measurement of clinical attachment loss (CAL) and probing depth. Periodontitis is a bacterially induced inflammation of the gingival tissues together with some loss of both the attachment of the periodontal ligament and bony support. The clinical manifestations of periodontitis come from the interaction between bacterial infection and the host response.

Many early epidemiologic studies of periodontal diseases were based on radiographic surveys of alveolar bone loss.16,54,55 However, radiography, although a standard diagnostic procedure in periodontitis clinical trials and patient care, is impractical and probably unethical in field studies. The attempt was therefore made to develop reversible indexes that were both sensitive and clinically manageable in field conditions. In this group, the most widely used periodontal index for many years was the Periodontal Index (PI), first described by Russell in 1956.53

The PI was a composite index, meaning that it scored both gingivitis and periodontitis on the same scale. This represented the thinking of the time, but modern understanding has shown the PI to be invalid because it does not include evaluation of CAL, grades all pockets of 3 mm or more equally, and scores gingivitis and periodontitis on the same weighted scale. Its compression of all information into a group mean also fails to illuminate the disease distribution, and a primary research interest today is why some people have no disease and others have severe disease. However, in the 1960s, the PI was viewed as an ideal field index and was used in a series of epidemiologic studies that correlated disease scores with clinical and social determinants. These correlations (see Chapter 21) soon became accepted as basic knowledge.

The same fundamental problem of a composite index was evident in the Periodontal Disease Index (PDI), intended as a more sensitive version of the PI for use in clinical trials.51 Although the PDI is also no longer used, the indirect method of measuring CAL that Ramfjord described then is still employed today. The PDI also gave us the “Ramfjord teeth,” a set of six teeth taken to represent the whole mouth during examination. The Ramfjord teeth are the maxillary right first molar, left central incisor, and left first bicuspid, and the mandibular left first molar, right central incisor, and right first bicuspid. Ramfjord chose this group of teeth to save time in clinical examinations. (Partial-mouth recording is discussed later in this chapter.)

In field studies today periodontitis is still measured by Ramfjord’s technique for the indirect measurement of CAL.51 The approach is shown graphically in Fig. 16-1. First, the examiner measures probing depth from the gingival crest to the base of the pocket. Second, the cemento-enamel junction is located and the depth from this junction to the gingival crest is recorded. The difference between these values gives an indirect measure of CAL. These measurements are usually carried out at between two and six sites per tooth, depending on the purpose of the study, either for selected teeth or for the whole dentition. It is an exacting process: measuring six sites per tooth for an intact dentition can take 30-40 minutes per examination, even for an experienced examiner. 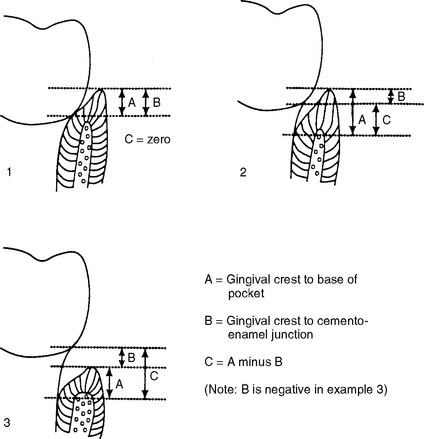 The Extent and Severity Index (ESI) records the percentage of sites with a CAL greater than 1 mm and the mean CAL for those affected sites.13 When amended to set a cutoff value of 2 mm, it has yielded some useful summary information.9 Despite its name, the ESI is a method of summarizing data rather than a true index. Its measurements are made by the Ramfjord method.

In addressing the first issue, allowance also must be make for examiner variation, which can confuse efforts to measure CAL progression. Even though measurements of pocket depth are repeatable to within 1 mm more than 90% of the time,29 the standard deviation of repeated CAL measurements of the same site by an experienced examiner with a manual probe is around 0.8 mm.24 Accordingly, change in attachment level in a clinical study must be at least 2 mm (i.e., two to three times the standard deviation) before the investigators can be confident that they are seeing real change rather than measurement error.25,34 CAL progression of at least 3 mm over a given time period has been the criterion for change in some studies.11,24,26

Even the introduction of computerized, constant-force probes28 has not changed these issues much. Compute/>