2: The Public Served by Dentistry

2 The Public Served by Dentistry

Dentistry exists to serve the public. Many aspects of that broad statement will be examined throughout this book, and in this chapter we start by looking at the structure of the U.S. population. The age distribution of the population, its ethnic makeup, and its geographic distribution within the country all profoundly affect the practice of dentistry. We then look at the public’s use of dental services and the factors that affect that use.

POPULATION OF THE UNITED STATES

In the decennial census of 2000, the population of the United States was over 281 million, about 4.6% of the world’s population. By 2004 the population had exceeded 292 million.10 Life expectancy around the beginning of the twenty-first century reached 76.5 years. Women live longer than men on average, and the highest life expectancy was among white women, at 79.9 years. They were followed by African-American women at 74.7 years, white men at 74.3 years, and African-American men at 67.2 years.12 Life expectancy continues to increase steadily and is expected to keep on increasing, although the disparities between whites and African-Americans are likely to persist. Those interracial disparities reflect social problems, whereas the fact that women usually live longer than men is likely to be genetically determined.

Fig. 2-1 features the population pyramid, a graphic method of showing age distribution, to demonstrate some population dynamics in the United States. The pyramid in Fig. 2-1, A, is from the 1990 census14 and the pyramid in Fig. 2-1, B, is from the 2000 census.15 The bulge of the baby-boomer generation, the large number of children born between 1946 and 1964 in the aftermath of World War II (1939–45), is clearly evident in the 25-39 age-groups in 1990 and the 35-49 age-groups in 2000. Of interest to dental practitioners is the aging of the population and the predominance of women in the oldest age-groups. As time goes by, the population pyramid for the United States will come to look more like a rectangle. Average age will continue to increase for the foreseeable future, and an ever-increasing proportion of the population will be in the older age-groups.

Fig. 2-1 illustrates two areas of important population change. One is the growth in the middle years, the inexorable upward movement of the baby-boomer bulge toward the older years. Less obvious, and less publicized, is the increase in the population 10-24 years old between 1990 and 2000. These bars are noticeably longer in 2000 than in 1990, and the fact that the numbers were not present in the birth to 14 years groups in 1990 means that immigration is making its mark.

The Census Bureau estimates that the total population of the United States in the year 2020, when many of today’s dental students will be practicing, will be 325 million.16 The rate of population increase during the 1980-95 period was generally around 0.9% per year, which does not sound a lot but is still more than 2 million people per year. To provide a global perspective, the contrast between current and projected population growth rates in some high-income countries and low-income countries is shown in Fig. 2-2. The highest rates of population growth are clearly occurring in the low-income world. In the year 2000, the population of the high-income countries was about one-fifth of the world’s total. 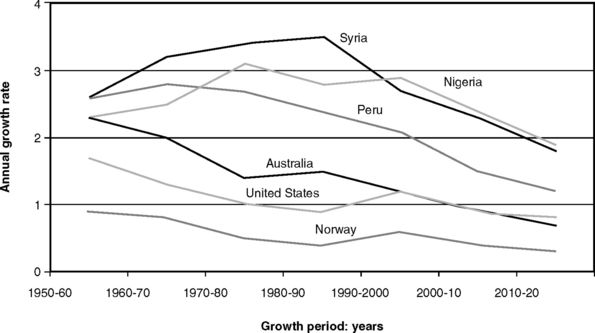 Low fertility rates since the late 1960s have combined with increasing life expectancy to produce the “graying of America,” the term often used to describe to the nation’s constantly increasing average age. Those ages 65 years and older were 11.2% of the population in 19796 and 12.6% in 2000,12 and are estimated to be 13.4% by 2010 and 18.5% by 2025 as the last of the baby boomers approach 65 years.12 Fig. 2-3 shows the change in age distribution of the U.S. population between 1980 and 2000, with Census Bureau projections to the year 2020. The main points to note are the continuing shrinkage of the 29 years and under group as a proportion of the total and the continuing growth in the 65 years and older group. The elderly population is not spread evenly around the country. Although the proportion of persons aged 65 years and older in the United States was 12.6% in 2000, it ranged from 18.1% in Florida to 5.1% in Alaska. 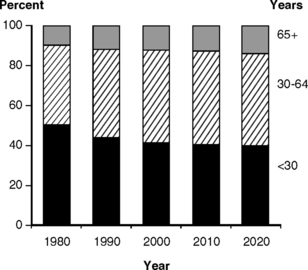 As noted, the U.S. population will continue to get older in future years, with profound social ramifications (e.g., for Social Security, housing, medical care). This aging trend, already well recognized in dentistry by greater attention to geriatric dentistry, will clearly affect the types and distribution of dental services in future years. For example, population trends alone indicate that there is likely to be a greater emphasis on periodontic and maintenance care than on treatment for children, even apart from trends in the oral diseases (see Chapters 19–23 Chapter 19Chapter 20Chapter 21Chapter 22Chapter 23).

Extensive migration of people from one region to another has long been a characteristic of the United States. It still is, with 15% of the population changing their address in 1998-99.13 A major trend since 1970 has been population movement from the Northeastern, North Central, and Midwest regions to the South and West, with the rate of population growth in recent years being most pronounced in the mountain states. Fig. 2-4 shows the percentage of total population by region for 2000. In the decade of the 1990s, Nevada’s population grew by 66%, Arizona’s by 40%, and Colorado’s by 30%. By comparison, the population of Rhode Island grew by only 4.5% and that of Pennsylvania by 3.4%.17 Since interregional migrants tend to be younger people, the median age in the South, the mountains, and the West is already lower than it is in the Northeast, and the interregional differences are expected to remain or even increase in the years ahead. 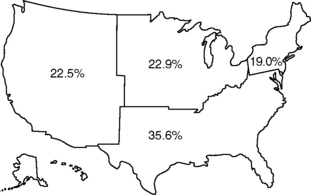 Fig. 2-4 Population distribution by geographic regions in the United States, 2000.17

Reasons for the “Sun Belt” migration since 1970 are primarily economic. The nation’s economic base, once concentrated in the industries of the Northeast and Midwest, has become more spread out, and businesses in the computer age have greater flexibility in choice of location than they used to have. The importance of the Pacific Rim nations in the American economy ensures that the West Coast will remain a leading business area, as well as a stopping place for immigrants from Asia. However, some potential constraints to this pattern of growth could change things. The main one concerns access to limited water supplies, already a major political issue in California. If the rapidly growing cities in the region also develop the social problems of the older northern cities, they could become less attractive places to live.

At a different level, big cities continue to lose population to suburbs and small towns and are financially troubled as job opportunities move out. The provision of dental services in these inner city areas is one of many functions that are adversely affected by these population movements.

The 2000 census of the United States listed 35.3 million African-Americans, which is 12.8% of the total population. Persons of Hispanic descent numbered 32.4 million, 11.8% of the total, and the number is increasing rapidly.17 Because the racial and ethnic groups now considered “minorities” are growing rapidly, the term minority groups will lose much of its current meaning during the twenty-first century. Fig. 2-5 shows the percentages of various racial and ethnic groups in the United States in 2000 and compares that distribution with the projected distribution over the next three decades. The main features of Fig. 2-5 are the expansion of the Asian–Pacific Islander population from 4% to 7%, the growth in the Hispanic population from 12% to 19%, and the decrease in the proportion of non-Hispanic whites from 71% to 60% of all Americans. 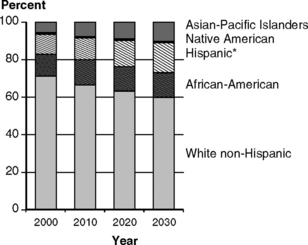 The federal definition of poverty changes with inflation and in 2003 was set as an annual income of $18,400 for a nonfarm four-person family in the contiguous United States. It is higher in Alaska and Hawaii.18

A disturbing trend that became evident during the 1980s, and has continued into the new century, is the increase in the proportion of Americans living in poverty. The proportion of Americans in poverty through the 1980s was 13%-15%.8 There was some improvement during the 1990s, but by 2002 the poverty rate was 12.1%, up from 11.7% in 2001.9 The problem of poverty is especially pronounced among America’/>