23: Oral Cancer and Other Oral Conditions

23 Oral Cancer and Other Oral Conditions

With the decline in dental caries among children and the understanding that severe periodontal diseases are not as common as once thought, dental professionals are in a position to spend more time on the diagnosis and treatment of conditions that traditionally have not occupied much time in the dental office. This chapter looks at the distribution of some of these conditions and at the risk factors and risk indicators associated with them.

Of all conditions that dental professionals see and treat, oral cancer is the one that literally has life and death implications. Age-adjusted oral cancer mortality rates among males in the United States have shown a long-term reduction, most notably since the mid-1980s (Fig. 23-1). Mortality rates among American females, which have always been low, have shown only slight reduction over the 24-year period covered in Fig. 23-1. 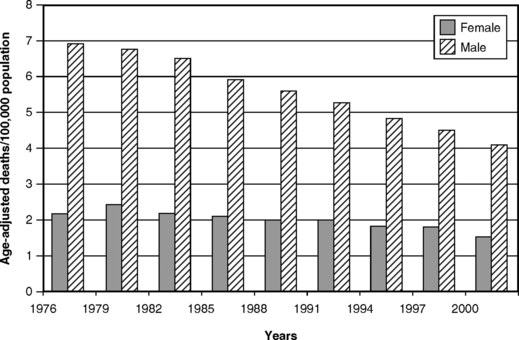 The term oral cancer includes disease category numbers 140-149 of the International Classification of Diseases, ninth revision, known as ICD-9.33 This group includes cancers of the lip, tongue, buccal mucosa, floor of the mouth, salivary glands, and pharynx. It does not include throat cancer. The occurrence of oral cancer and its site distribution within the mouth varies widely in different parts of the world,61,65 presumably because of the environmental factors with which these cancers are associated. Squamous cell carcinomas of the oral mucosa, tongue, and lip comprise 80% of all oral cancers on a global basis.34

In 2004 there were approximately 28,300 new oral cancer cases in the United States and some 7200 deaths from oral cancer. Table 23-1 shows the extent of oral cancer in the United States and compares incidence data for 2004 with that for 1988. There were more new cancers of all kinds in 2004 than in 1988, but the number of new oral cancers had actually dropped. As shown in the table, cancers of the oral cavity constituted some 2.1% of all new cases reported in 2004, down from 3.1% in 1988. Mortality from oral cancer has also dropped, both in absolute numbers and proportionately, and accounted for 1.3% of all cancer deaths in 2004. The proportionate drop in mortality rates is attributable both to the slight drop in absolute numbers of oral cancers and to the absolute increase in mortality from other types of cancer.

Although these overall trends in the United States are moving in the right direction, oral cancer remains twice as prevalent in males as in females (see Table 23-1), and annual incidence among males in 1992-99 remained more than twice the rate seen in females (Fig. 23-2). Twice as many deaths from oral cancer occur in males as in females. Some differences between the races are seen in the specific sites within the oral cavity in which oral cancer is found (Table 23-2), and there are no obvious explanations for these differences. 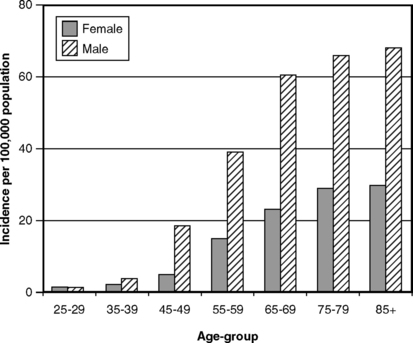 Table 23-2 Site of occurrence of oral cancer for estimated new cases per 100,000 population, for all races, whites, African-Americans, and Asians/Pacific Islanders, United States, 200085 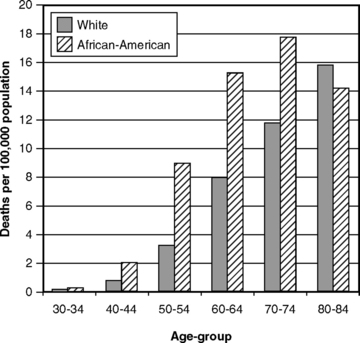 A standard measure of cancer severity is the 5-year relative survival rate, which is the percentage of people still alive 5 years after diagnosis, adjusted for those who died for some other reason over the 5 years. Fig. 23-4 shows these rates for men and women from 1974 to 1999, and it is evident that they have not changed much. Survival rates are much more favorable for whites than for African-Americans, and the disparity in survival rates between the races clearly had not improved by the turn of the century (Fig. 23-5). Survival rates have diminished in poorer parts of Europe over recent years, a finding attributed to increasing alcohol consumption4 and to social deprivation.47 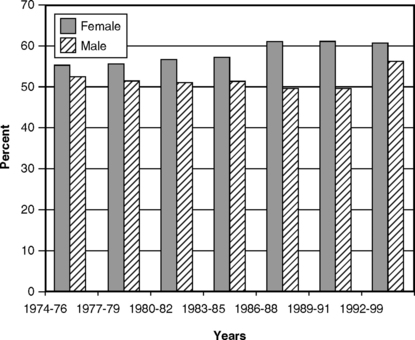 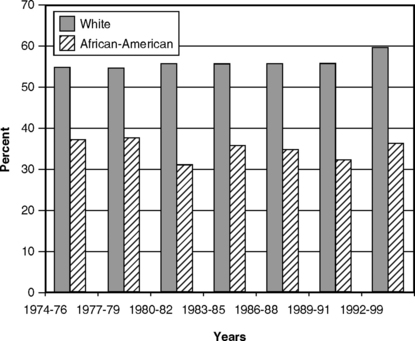 The prospects for survival are considerably higher if diagnosis is made when the cancer is confined to a local lesion, rather than when there is regional or distant spread (Table 23-3). Five-year survival is four times greater when tumors are diagnosed at localized stages rather than after metastasis has occurred. It follows that cancers and precancerous lesions should be diagnosed as early as possible if treatment is to have a good prognosis, but there is nothing in the data to suggest that the proportion of oral cancers diagnosed at earlier, more localized stages has increased since 1973.82

Table 23-3 Five-year survival rates for whites and African-Americans diagnosed with oral cancer by stage of metastatic spread from the primary site, United States, 1992-9985

Worldwide, the combination of tobacco use, heavy alcohol use, and poor diet is responsible for 90% of all oral cancers.35 The single risk factor most consistently associated with oral cancer on a global basis is the use of tobacco in its various forms.65 For example, in India some 30%-40% of all reported cancers are oral cancers,3,16 a remarkably high prevalence that is closely associated with several forms of tobacco smoking and chewing in that country. Elsewhere, smoking and other uses of tobacco are the most consistently identified risk factors. High relative risks in the range of 6:1 to 14:1 for the development of oral cancers in smokers compared to nonsmokers continue to be reported in a number of countries.20,21,36,51,53,60,80 The risk of developing oral cancer from smoking is just as high for women as for men,37 and risk diminishes with time since quitting.21,53 The risk of oral cancer in association with smoking is greatest for pharyngeal cancers and lowest for lip cancer.51

The extraordinarily high prevalence of oral cancer in India has naturally attracted research attention, especially in light of the widespread habit of chewing the areca nut (betel) in that country. Betel is usually chewed in a mix with tobacco, and lime and other ingredients are sometimes added. Some studies concluded that the cancer risk comes largely from the tobacco with little role for betel.28 However, other research has identified betel as a major etiologic factor in the development of oral submucous fibrosis,58,83 a precancerous condition that has a high rate of malignant transformation.58,77 Nodular leukoplakia, a precancerous condition that may be associated with oral submucous fibrosis, also shows a high rate of malignant transformation. Tobacco users with nodular leukoplakia are at especially high risk of oral cancer.26 Intervention studies to curtail tobacco and betel chewing have had moderate success in reducing leukoplakia formation in India and confirm that chewing tobacco and betel are major risk factors for oral cancer.27

Over recent years, the resurgence in the use of smokeless tobacco has presented the United States with another risk factor for oral cancer. Because this recent increase in use is predominantly among young people,11 it has so far had little impact on incidence and mortality data, but if widespread use continues, the incidence of oral cancer could rise sharply in the years ahead. The dimensions of smokeless tobacco use, its effects on human health, and what dental professionals can do about it are discussed in Chapter 30. Alcohol consumption, especially heavy consumption, has also been identified as a risk factor, although not all studies have found it to be a risk factor independent of tobacco use.53,80

The role of genetics in oral cancers is likely to be strong, although it requires further definition at present. Although mutation of the p53 cancer-suppression gene has been recognized as an etiologic factor in many forms of cancer for some years, its role in oral cancer is only starting to be well defined.41,63 Further research in oral cancer is likely to focus on the genetic influences and molecular risk markers, but the importance of reducing the most common risk factors still remains.

Other risk factors have been identified, although the evidence is less consistent than it is for smoking and alcohol use. Painful and ill-fitting dentures are still often listed as a risk factor,95 although supportive evidence is lacking. Long-term exposure to strong sunlight is seen as a risk factor for lip cancer; however, aside from the higher prevalence in sunnier climates, evidence for that contention is not easy to find.79 Chronic inflammation, such as that found with lichen planus, has also been suggested as a possible risk factor.14

In terms of diagnosis, concern has been expressed that survival rates for oral cancer are unnecessarily low because of delays by patients in seeking attention for lesions and because of delays in diagnosis by health professionals.25 Dentists and hygienists must be sensitive to the presence of leukoplakia and other precancerous conditions, especially in patients who present with known risk factors in their histories. Leukoplakia has long been known as a precancerous condition, meaning that it has been documented to precede the development of cancer. It has also been pointed out that mucosal erythroplakia, rather than leukoplakia, is often the first sign of cancerous change in a lesion.51 A related issue here is the unusually high rate of second primary cancers among patients who have previously had oral cancer, a finding that is also correlated with higher tobacco use and alcohol consumption.12

In general, the epidemiology of soft tissue lesions other than cancer has not been well studied. Precancerous conditions are obviously the lesions of most concern. A precancerous lesion is defined as morphologically altered tissue in which cancer is more likely to occur than in its apparently normal counterpart.93 The principal precancerous conditions for oral cancer are generally recognized as leukoplakia and erythroplakia.

Leukoplakia, already mentioned as a risk factor in tobacco users, is generally defined as a white patch or plaque that cannot be characterized clinically or by pathologic examination as anything else,42,89 a definition by default that is not very satisfactory. There is no general figure for the prevalence of leukoplakia in the population; it has been studied only in connection with known cancer risk factors su/>