Tooth loss, especially total tooth loss or edentulism, is the dental equivalent of death. Tooth loss diminishes the quality of life, often substantially, and tooth loss is also related to poorer general health.44 If retaining teeth were just a matter of preventing disease conditions then the issue would be reasonably straightforward, but it is more complicated than that. Although loss of teeth is an end product of oral disease, it is also a reflection of patient and dentist attitudes, the dentist-patient relationship, the availability and accessibility of care, and the prevailing philosophies of care. This chapter reviews the issues and trends in tooth loss, and the reasons why people lose teeth.

For centuries, tooth loss was considered an inevitable part of the human condition and was thus generally accepted with resignation. Long before dentistry emerged as a true profession (see Chapter 1) the tooth-puller was a necessary part of most cultures, sometimes based in a village and sometimes plying an itinerant trade. As the profession of dentistry evolved during the nineteenth century, much of the work of dentists was still devoted to tooth extraction. Caries was rampant at this time (see Chapter 20), restorative techniques crude and painful, prevention unknown. As a result, people expected to lose teeth and dentists expected to extract them.

Appalling oral health status marked by extensive loss of teeth extended well into the twentieth century in high-income countries. The oral condition of the millions drafted into the armies of many countries during World War I (1914-18) was generally dreadful. The response of authorities was to extract more teeth, so that troops preparing to bayonet each other would not be bothered by toothache. Right after the war, surveys in New York found that schoolgirls ages 13-17 years had lost 13.5% of first molars and 2.5% of second molars, whereas adults of different ages had lost 22%-47% of first molars.31,32 Things improved only slowly. In the Hagerstown studies of 1938, 15-year-old children averaged 1.1 lost permanent teeth per child, 94% of which were first molars.37 Age-specific tooth loss among white-collar working adults in a large insurance office showed only mild improvement between 1927 and 1942,20 and extensive tooth loss was still common among World War II (1939-45) draftees in the United States.49,53

By the beginning of the twenty-first century tooth retention was much improved in all the high-income nations. Change came about with improvements in restorative dentistry (especially the development of the air-turbine dental engine in the late 1950s), increasing affluence and its accompanying positive attitudes toward tooth retention, and significant research advances in preventing oral diseases. In that latter context, the advent of water fluoridation (see Chapter 25) was probably the most profound influence, because it demonstrated to individuals and their families, in a way that dental treatment could not, that dental caries and subsequent tooth loss were not inevitable.

The sight of grandfather’s false teeth in a glass of water was a familiar one to several generations of Americans; the acquisition of false teeth was thought to go along with rheumatics, constipation, sensory diminution, and loss of memory as a normal part of growing old.13

That editorial comment from the mid-1980s conjured up an image that is fast becoming unknown to the present generation, because edentulism continues to decline steadily in the United States12 and in other economically developed nations.36,50,54 Table 19-1 shows the proportion of persons ages 65 and over who are edentulous in 10 countries, along with the national income category for each country. Fig. 19-1 shows the proportion of adults, by age, who are edentulous, as measured in national surveys in the United States in 1957-58, 1971, 1985-86, and 1988-94. These data indicate that edentulism has declined consistently in each age-group with each succeeding survey. The relative decline in edentulism has been sharpest in the younger age-groups, which suggests that edentulism will become even rarer as today’s younger cohorts grow older. 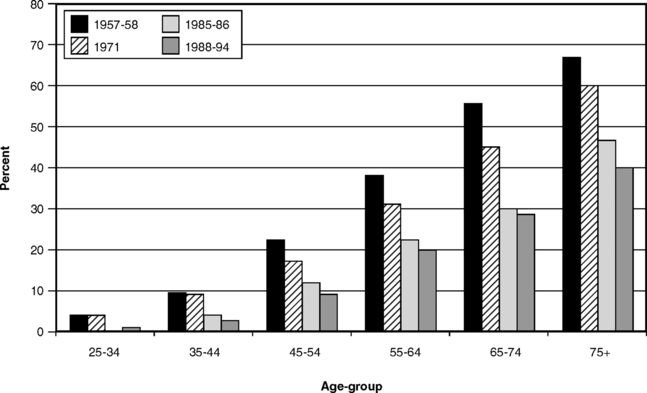 The third National Health and Nutrition Examination Survey (NHANES III) was conducted between 1988 and 1994, and collected data from a representative sample of the population of the United States. In NHANES III, 10.5% of Americans ages 18 or older were found to be edentulous.19 There were sharply defined age-cohort differences: only some 1% of 25- to 34-year-olds were edentulous compared to 44% of those ages 75 years or older.43 One estimate of the decline in edentulism suggested that by the year 2024 only 10% of Americans ages 65-74 would be edentulous,67 compared to 28% edentulous in that age-group in 1988-91.43 Those who will be in the 65-74 age-cohort in 2024 were in the 25- to 34-year-old group from 1988 to 1991, a cohort benefiting from the postfluoride age of prevention (see Chapter 20). This steady decline in edentulism among United States adults is expected to continue in spite of the aging of the population (see Chapter 2).

Many people are puzzled by the apparently slow rate of progress in decreasing edentulism when we constantly hear of rapid improvements in oral health status. The reason lies in the nature of the condition. When the data in Fig. 19-1 are considered, it can be noted that the youngest individuals in the 75-and-older cohort for 1988-94 were born in 1919, and most were born earlier. The early adult years for this group were during the Great Depression of the 1930s, and many of them then served in World War II. Indeed, it is probable that a good proportion of this cohort first became edentulous during that war, and they have been influencing the statistics ever since. In time, these aging cohorts will be replaced by the baby boomers, who grew up in a totally different world of affluence and modern disease prevention, and with fundamentally more positive attitudes toward tooth retention. Already the emerging elderly cohorts (i.e., the 55-64 and 65-74 cohorts from the two most recent surveys in Fig. 19-1) represent the new elderly, a term coined to describe the post-World War II group who have experienced material affluence, higher education than their predecessors, and more of the benefits of modern preventive health care.24 The level of total tooth loss among these age-groups in 1985-86 and 1988-94 was already sharply lower than that in the 75-and-over groups in Fig. 19-1.

The importance of nondisease factors in edentulism emerges from Table 19-1, which shows that the proportion of edentulous individuals among the elderly bears little relationship to national income, and from Table 19-2, which shows the extent of total tooth loss among adults ages 35-44 in nine high-income countries in the 1968-77 period. The data in Table 19-2, most of them coming from the first International Collaborative Survey (ICS I) of the mid-1970s,4 show a range in the proportion of edentulous persons from one country to another that is too high to be explained solely in terms of dental disease; health beliefs and societal attitudes must be operating here. At the time the data in Table 19-2 were collected, there was still quite a high proportion of adults in New Zealand, for example, who attached no stigma to wearing full dentures.18 In developing countries, where access to Western-type dental care is limited, edentulism is uncommon.5,22,41

We introduced the National Oral Health Surveillance System in Chapter 4 and noted that total tooth loss was one of the eight indicators of oral health. The information is collected by interview as part of the Behavioral Risk Factor Surveillance System (see Chapter 4), and some of the differences between states in proportion of older people who are edentulous give us food for thought. Data for a selection of 10 states, chosen more or less arbitrarily to highlight the interstate contrasts, are shown in Table 19-3.

Table 19-3 Percentage of persons in 10 of the United States, ages 65 and older, who are edentulous60