Bernimoulin et al. (1975) first reported the coronally positioned graft succeeding grafting with a free gingival autograft. This was a two-stage procedure. In the first stage, a free gingival graft was placed apical to the margins of the recession to be treated. The second stage occurred a few months later, when the graft was coronally positioned over the denuded root surfaces.

A pedicle graft is used to cover gingival recessions affecting natural teeth. In the case of mild recessions, the one-stage, coronally positioned flap technique is sufficient. When the recession is moderate to severe (≥4 mm), a two-stage procedure will bring more predictable, long-term results.

This includes the basic surgical kit plus the following:

After a minimum 3 months of healing, the gingival graft is coronally positioned to cover the root, which should be carefully planned and conditioned with citric acid or tetracycline HCl (50–100 mg/ml) for 3–5 min. If the root has a proeminent concavity or convexity, it should be eliminated or reduced with a back-action chisel or a burr to graft on a flat surface.

Figure 8.1. Tooth 20 has gingival recession and no attached gingiva. 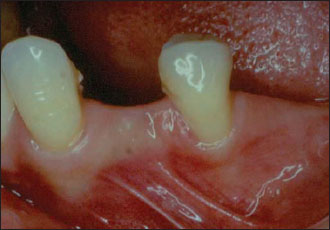 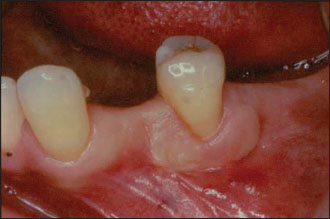 The second stage requires a split-thickness dissection with mesial and distal vertical releasing incisions (Fig. 8.3). The vertical incisions are made at the line angles of the adjacen/>