Deep overbite is perhaps the most common malocclusion and is also the most difficult to treat successfully. Excessive incisal overlap, which varies widely from patient to patient, is one of the primary manifestations of dental malocclusion.1 Before embarking on a detailed discussion of deep bite malocclusion it is imperative to understand the concept of overbite. One of the earliest definitions of overbite was put forward by Strang,2 who defined it as “the overlapping of the upper anterior teeth over the lowers in the vertical plane.” However, since the crown length of the upper and lower incisors varies significantly in individuals, a notation of overbite as a percentage is more descriptive and desirable. Therefore the same definition when put in terms of percentage defines overbite as “the amount and percentage of overlap of the lower incisors by the upper incisors.”

The ideal overbite in a normal occlusion may range between 2- and 4-mm or more appropriately between 5% and 25% (overlap of the mandibular incisors by the maxillary incisors) (Fig. 8-1). According to Nanda,3 even a range of 25% to 40% without any associated functional problems during various movements of the temporomandibular joint (TMJ) may be considered normal. However, overlaps greater than 40% should be considered “excessive” (deep bite), as they have the potential to cause deleterious effects on the overall dental health of the surrounding periodontal structures and the TMJ. At 5 to 6 years of age the percentage of overbite varies between 36.5% and 39.2%.4 Between 9 and 12 years of age the overbite usually increases, whereas in the period between 12 years and adulthood it decreases.5 Thereafter it remains largely unchanged, varying between 37.9% and 40.7% unless affected by other factors such as abrasion or loss of teeth, causing reduced vertical dimension. Severe deep bites (overbites >5-mm) are found in nearly 20% of children and 13% of adults, representing about 95.2% of vertical occlusal problems. 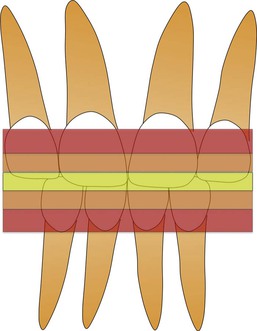 One of the most severe forms of excessive overbite is the cover bite6 (Fig. 8-2), which is most often associated with the Class II, Division 2 malocclusion. This condition was first recorded in 1912 in the German literature as Deckbiss.7 It is characterized by complete covering or concealment of the mandibular incisors’ crowns due to excessive overbite and retroclination of the maxillary incisors. Another term that has been used previously to denote a severe form of deep bite is the closed bite8 (Fig. 8-3). This is mostly seen in adults and very rarely in young children and is characterized by excessive overbite resulting from loss of posterior teeth.

Figure 8-2 Example of cover bite malocclusion. Note that the lower incisors are completely concealed by the upper incisors.

From a developmental standpoint, skeletal or dental overbite is caused by either genetic or environmental factors, or a combination of both. Skeletal deep bites usually have a horizontal growth pattern and are characterized by (1) growth discrepancy of the maxillary and mandibular jawbones, (2) convergent rotation of the jaw bases, and/or (3) deficient mandibular ramus height. In such situations the anterior facial height is often short, particularly the lower facial third. On the other hand, dental deep bites show either supraocclusion (overeruption) of the incisors2,9 or infraocclusion (undereruption) of the molars,2,5,9,10 or a combination of the two. Other factors that can affect this condition include alteration in the tooth morphologies, premature loss of permanent teeth resulting in lingual collapse of the maxillary or mandibular anterior teeth, mesiodistal width of anterior teeth, and age-related natural deepening of the bite.

Deep bites primarily caused by environmental factors can also be classified as “acquired deep bites.” It is a well-known fact that there is a dynamic equilibrium of forces between the structures around the teeth, namely, the tongue, the buccinator, the mentalis and the orbicularis oris muscles, and the occlusal forces that assist in the balanced development and maintenance of the occlusion. Any environmental condition that disrupts this dynamic harmony can lead to a malocclusion. Some examples are:

2. Wearing away of the occlusal surface or tooth abrasion

3. Anterior tipping of the posterior teeth into extraction sites

Hence deep bite etiology must be considered in detail in order to formulate a comprehensive diagnosis and treatment plan for each patient so that optimal skeletal, dental, and esthetic results can be attained.

A deep overbite can be corrected either by extrusion of posterior teeth or by inhibition and genuine intrusion of anterior teeth, or by a combination of the two (Fig. 8-4). The choice of treatment is based in part on the etiology of deep bite, the amount of growth anticipated, the vertical dimension, the relationship of the teeth to the adjoining soft tissue structures, and the desired position of the occlusal plane. 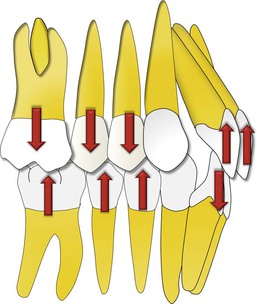 Figure 8-4 Deep bite malocclusion can be treated by either intrusion of incisors or extrusion of posterior teeth.

It is widely accepted that correction of deep bite is both easier to accomplish and more stable when it is performed on growing patients than when it is attempted on those with no appreciable growth remaining.11,12 Since growth tends to increase the vertical distance between the maxillae and the mandible, it is probably useful to treat such patients in a period of active mandibular growth. During the growth period, tooth eruption can be stimulated in the posterior segments and inhibited in the anterior because condylar growth allows for dentoalveolar growth. However, in adults such a movement is counteracted by the posterior occlusion, especially in a patient with a hypodivergent skeletal pattern. The stability of such a tooth movement, if performed, is highly questionable, as it leads to alterations in muscle physiology, thereby increasing the chances of relapse. In such malocclusions and others in which growth stimulation is no longer possible, fixed or removable mechanical appliances are needed to achieve optimal treatment results. In some patients a surgical procedure may be required. For example, in patients with vertical maxillary excess, a Le Fort I osteotomy with maxillary impaction might be required to achieve optimum dentofacial esthetics. A detailed discussion of this subject is beyond the scope of this chapter and can be found elsewhere.13

Assessment of the Vertical Dimension

Schudy14 advocated correction of deep bite with eruption of premolars and molars as the treatment of choice, while others3,15 have preferred intrusion of incisors to treat the majority of their patients. Instead of following anecdotal information it is important to carefully consider the influence of extrusive or intrusive mechanics on the vertical facial height of a patient, as this in turn may affect the anterior-posterior relationship of the maxilla and mandible.

In general, eruptive mechanics should not encroach on the freeway8 or interocclusal space, which is defined as the distance between the occlusal or incisal surfaces of the maxillary and mandibular teeth when the mandible is in the physiological rest position. The average is between 2- and 4-mm. When there is a larger than normal free space, greater opportunities exist for correction by guiding vertical alveolar development. For example, in a Class II, Division 2 patient with a hypodivergent facial pattern, redundant lips, and a flat mandibular plane angle, the deep bite can be corrected and facial esthetics improved by increasing the lower facial height or facial convexity. However, in most other Class II malocclusions it is not always desirable to increase the vertical dimension, since doing so would tend to accentuate the point A–point B discrepancy and increase an abnormally large lower face.

In the present era, “soft tissue relationships” form an important diagnostic tool for deep bite correction. The clinician should always consider the maxillary incisor position relative to the lip position to determine whether to maintain, intrude, or extrude the maxillary incisors relative to the upper lip. With increased emphasis on smile esthetics and smile design, the use of dynamic smile analysis is gaining precedence over static photographs in diagnosing malocclusions and formulating appropriate treatment plans for their correction.16

Incisal exposure should be considered in three different clinical situations during initial examination: in relaxed lip position, while smiling, and during speech. In a relaxed lip position, 2- to 4-mm of incisor exposure, which includes the incisal edges, is considered acceptable. When smiling, the average incisor exposure is almost two-thirds that of the upper incisor, according to Maulik and Nanda.16 They also reported that in most pleasing smiles the upper lip in males does not show any gingiva; however, females can have 1- to 2-mm of gingival exposure. If this condition is met and a deep bite is still present, the treatment plan should focus on either posterior extrusion (if the vertical parameters permit) or lower incisor intrusion (Fig. 8-5). In contrast, an occlusal plane “significantly” below the ideal might show excessive gingiva, which might then require selective intrusion of the upper incisors (Fig. 8-6). Incisor exposure during speech may give additional information, as different facial muscles are involved. 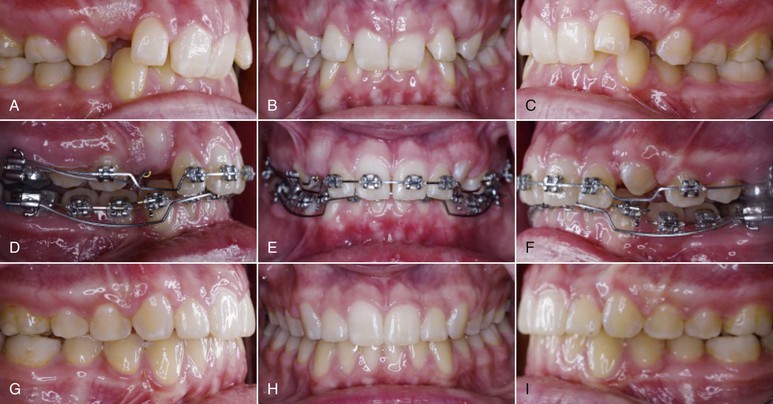 Figure 8-5 A–C, This adolescent female patient had the chief complaint of excessive overbite. On careful analysis it was observed that her upper incisor exposure was adequate both at rest and during smiling. D–F, The decision was made to intrude the lower incisors only so the deep bite malocclusion could be resolved without significantly affecting the patient’s smile esthetics. Segmental intrusion of the lower incisors was carried out with an overlay intrusion arch. G–I, Treatment results. 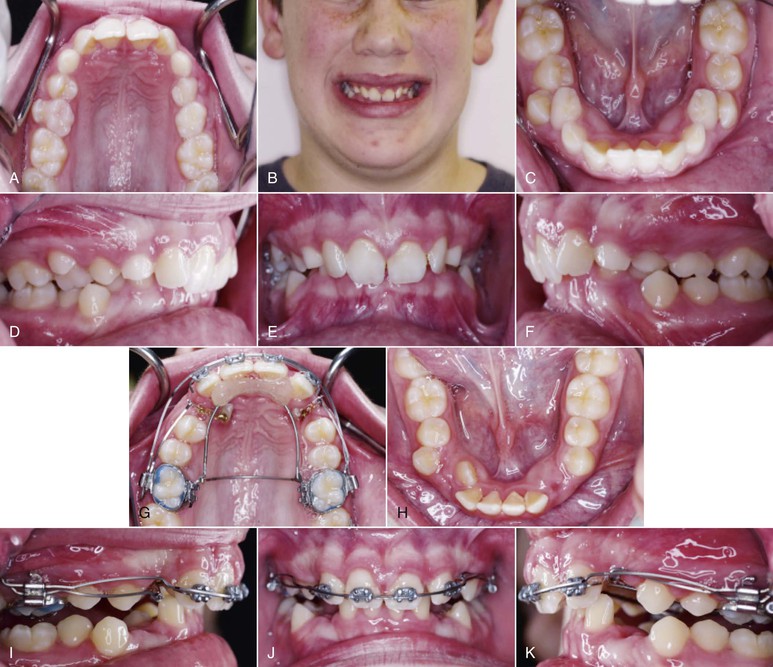 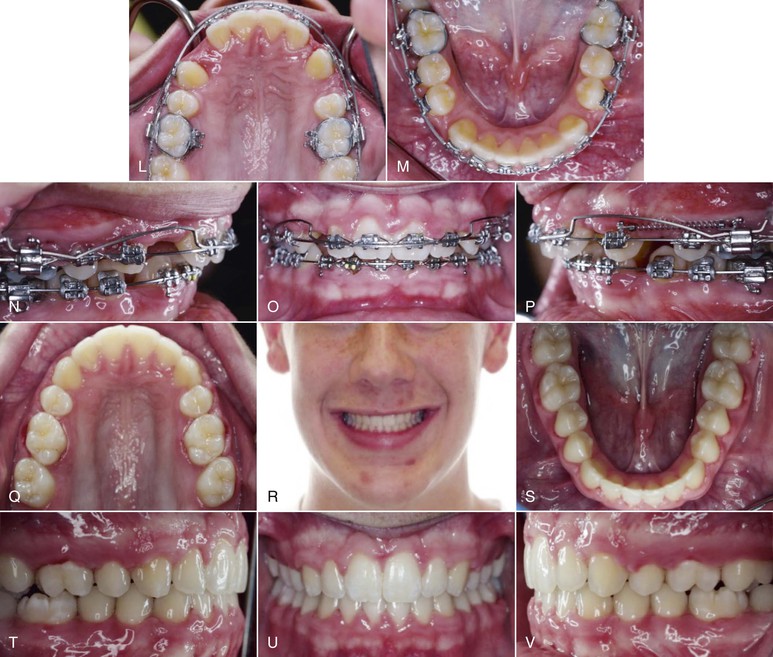 Figure 8-6 A–F, Pretreatment photographs. G–P, Extremely light forces delivered through a Connecticut Intrusion Arch (CTA) were used to selectively intrude only the upper central incisors. Q–V, Treatment results show a significant improvement in the gingival exposure and the smile as well as the correction of the deep overbite.

Flaring (proclining) the incisors is yet another option that primarily camouflages deep bites. It is especially useful in patients who have retroclined incisors to begin with (e.g., Class II, Division 2 cases). However, rapid labial tipping of mandibular incisors must be avoided to minimize risk of root resorption, gingival recession, and bone dehiscence, especially on a narrow symphysis with questionable labio-lingual width of the alveolar bone.17 Another contraindication can be undesirable facial esthetics.

Intrusion of the Upper and Lower Incisors

Incisor intrusion is generally indicated in a patient with a vertical maxillary excess, a large interlabial gap, a long lower facial height, or a steep mandibular plane. Some of the appliances that can achieve “true incisor intrusion”18 are discussed below.