Modern implant dentistry began in North America with the 1982 Toronto Conference on Osseointegration in Clinical Dentistry (Zarb and Schmitt 1991). The implant method used by Zarb and Schmidt was developed by Branemark et al. (1969) in Sweden. Prior to this conference, dental implants had not been well accepted by U.S. prosthodontists because of the relatively high failure rate reported for previous implant designs and techniques (Schnitman and Shulman 1980).

TREATMENT OF THE EDENTULOUS MANDIBLE

These mandibular dentures were designed with long transmucosal abutments that were attached to the implant platforms, raising the inferior border of the prosthesis well above the ridge crest in an attempt to facilitate cleaning (Figure 8.1). However, this design often created a flat shelf on the inferior border of the prosthesis with wide-open spaces that were difficult to clean (Figure 8.2). Five implants were commonly used to retain and support the prosthesis, and these implants were commonly placed by the surgeon freehand (McCartney 1993), without regard to the design of the final prosthesis. The ability to make a complete denture that was rigidly fixed was a revolutionary development in dentistry, and few dentists concerned themselves with precision during implant placement. Because the prosthesis was retained with screws, screw-access channels were placed over the center of each implant. The location of these screw-access channels was dictated by the location and angulation of the implants beneath them, and the openings of the access channels could compromise aesthetics and occlusion (Hebel and Gajjar 1997) (Figure 8.3).

Figure 8.1 Screw-retained fixed complete denture describe by Zarb and Schmidt. (A) Right view; (B) left view. Note the long transmucosal abutments to which the prosthesis is attached.

Figure 8.2 Inferior view of prosthesis shown in Figure 8.1. Note shelf-like appearance of this inferior surface that can impede the patient’s access to clean this surface. 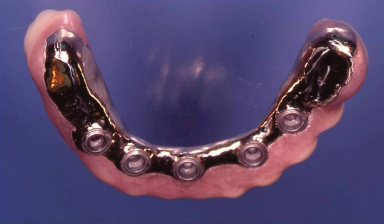 Figure 8.3 Occlusal view of prosthesis shown in Figure 8.1. Screw-access channels will be filled with composite resin after the prosthesis is screwed in place. Access channel openings have minimal effect on aesthetics and occlusal function; nevertheless, the occlusal surfaces of some of the teeth are compromised. 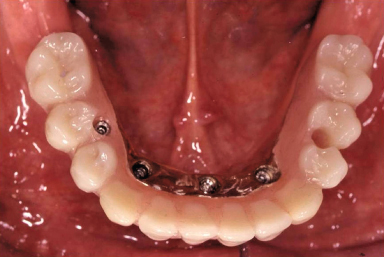 With time, the design of this prosthesis/>